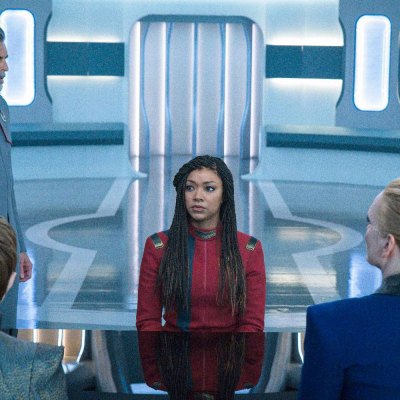 Star Trek: Discovery has been many things over the course of its run: A grim war story, a nostalgia-fueled prequel, and a journey into a far-flung feature unlike anything the franchise had attempted in the past. Over the course of the show’s 40-ish episodes to date, the crew of the U.S.S. Discovery has faced off against Mirror Universe clones, battled an evil A.I. bent on wiping out all life in the universe, and struggled to find the cause of the mysterious Burn, a galaxy-wide disaster that killed millions and crippled the Federation as we know it.

To say this series has struggled to find its footing is putting it very, very mildly. And fans might be forgiven for wondering just how many chances Discovery could possibly have to reinvent itself. But judging by Season 4’s first episode, the fourth time just might be the charm. “Kobayashi Maru” is not only a thrilling hour of television in its own right, full of space adventures and thoughtful ruminations on the nature of leadership, but it’s also the first time Discovery has truly felt like honest-to-goodness Star Trek from start to finish, in all the ways that matter.

From the simple, straightforward missions focused on providing help and hope to those in need of it – no strings attached – to the fascinating prospect of rebuilding the Federation from what is essentially the ground up, these are the sorts of stories this franchise has always been uniquely equipped to tell, and watching Discovery finally get the chance to do so honestly feels like a revelation. There’s a sense of both thematic and narrative purpose throughout “Kobayashi Maru” and multiple characters are given the chance to shine – in ways that are separate and apart from their relationships with Michael.

The difference is clear from the episode’s opening scene, which features Micheal and Book attempting to mend ties with a beautifully weird race of what appear to be alien moth people, who are rightfully distrustful of the Federation in the wake of the events surrounding the Burn. (Well, that, and the fact that they think that Book is keeping Grudge prisoner and she needs to be rescued.) But, this is the Star Trek I’m here for, the one where the dramatic chase scenes are ultimately used in the service of something bigger than simple explosions, and in which its politics are as philosophical as they are practical.

And while some of us might have been apprehensive about how Discovery would handle Burnham’s elevation to captain, given that so much of its reason for existing was to chronicle her journey towards the chair, it turns out that putting her character in the position we always knew she was headed for has given the show the freedom to finally confront her flaws in intriguing new ways. Yes, Michael takes risks. Yes, she leads with her heart and has an almost pathological need to save everyone who crosses her path. And she’s willing to risk herself in a way that few other characters on the show can match.

But part of being a true leader is about being willing to step back, to risk others instead of yourself, to understand that there will truly be situations full of nothing but bad and worse choices. (That’s the point of the Kobayashi Maru test, after all.)  Michael is honestly terrible at all of those things, and it feels like Discovery is finally forcing her to face that, rather than make excuses for why her particular way of doing things is an exception. That sounds like an insult, but it’s not – I’m honestly so excited to see how this character grows and changes in the chair, and how she strikes a balance between who she is and what being a captain, for real, will require her to become.

The basic plot of “Kobayashi Maru” involves the Discovery being sent to answer a distress call from a deep space repair base, which has been pummeled by debris caused by some sort of unexplained gravitational anomaly. This turns out to be a remarkably – for this show anyway – roundabout way of introducing the season’s apparent overarching mystery: What is this anomaly, what caused it, and how can it be stopped? For once it’s a larger arc with stakes that are easy to understand, intimately tied to characters we already know and care about – something that couldn’t be said for most of the larger Burn and Red Angel plots.

The destruction of Book’s beautiful homeworld of Kwejian – as well as, one has to assume, that adorable nephew – is heartbreaking, but I’d be remiss if I didn’t point out that I’m really looking forward to seeing how the fallout from this cataclysmic loss affects his character. As much as I love Book and Burnham’s relationship (and this episode nicely highlights so much of what makes their connection special), much of his presence on Discovery thus far has been defined by his relationship to her. This certainly makes sense given how his character was introduced and the role he played in introducing Burnham to the 32nd century. But if he’s going to be a real part of this show (and I think he deserves to be) he has to transition into being something beyond Michael’s love interest, and this seems like the perfect opportunity to really delve into who he is in his own right.

ther things I’m excited about: The introduction of new Federation President Laira Rillak is intriguing, both because I simply love the basics of the character – a  half-human, half-Cardassian woman from what appears to be something of a working-class background with a take no bullshit attitude – and because The Man in the High Castle’s Chelah Horsdal is a wonderful addition to the show’s already stacked cast. I hope we see more of her this season, if only because a character like this, who can go toe-to-toe with Michael and tell her hard truths without flinching? Let’s just say that has been a rare thing on Discovery (Emperor Georgiou is technically evil, after all) and I want to see more of it.

In truth, the only part of this episode that didn’t entirely work – and I’m as surprised by this as anyone – was pretty much everything to do with Saru’s time on his home planet of Kaalamar. Since we all know that Saru is going to find his way back to the Discovery in the not too distant future, there’s something about these interludes that feel purposeless, as much as it’s lovely to see how the Kelpians in the 32 century have come into their own versus those we met back in Saru’s time. But I can’t say that I’m terribly interested in Su’Kal’s life now that he’s not an immediate threat to millions of lives, and this is honestly screentime I’d rather spend on other characters (Detmer and Owo, for a start.)

All that said, however: “Kobayashi Maru” is still clearly Discovery’s best premiere to date, and if the rest of this season can live up to its promise? We’re in for quite a ride.