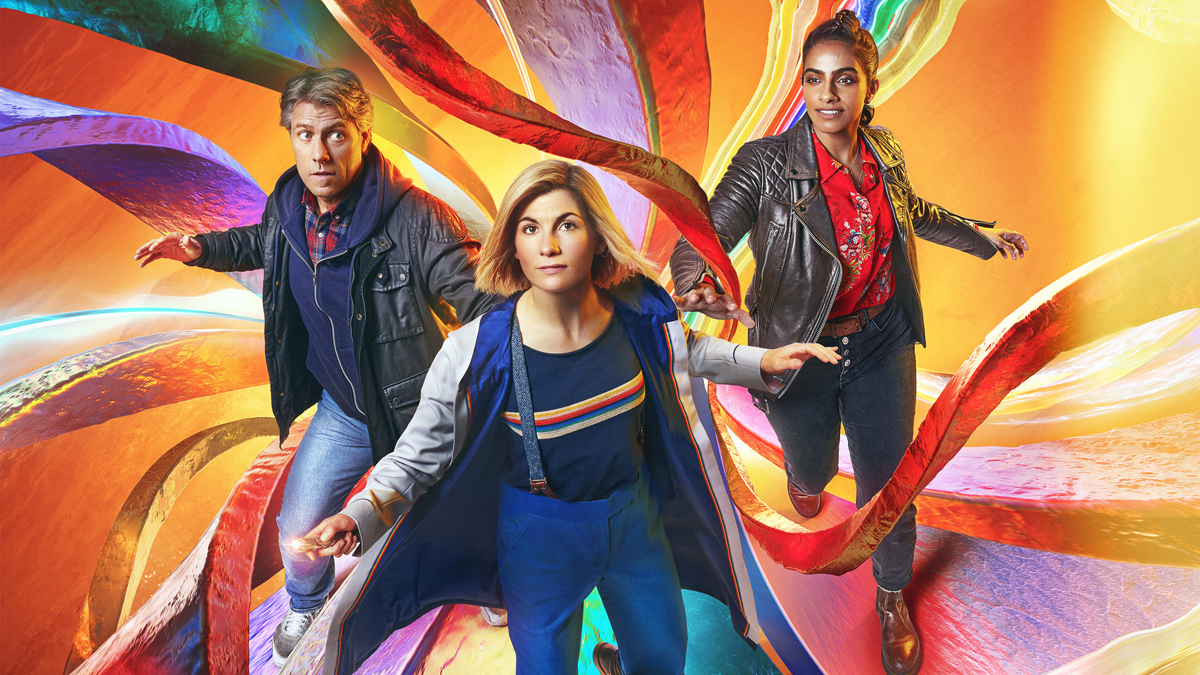 Warning: contains spoilers for Doctor Who: Flux episodes one to three.

‘The new Doctor Who showrunner is destroying continuity!’

Like ‘I don’t like the new theme tune’, ‘When did the show suddenly start having all this progressive politics in it?’, ‘Actually the new theme tune’s growing on me’, ‘Why aren’t the Sontarans scary anymore?’ and ‘I don’t like the new theme tune’, the above doesn’t actually mean anything – it’s just something fans like to say to remind each other that we still exist. Fans were saying it almost since the dawn of the show, and they’ll still be saying it when the Doctor is played by an actual alien and the initial wave of casting scepticism has been replaced by appreciation for how it really brought the character into the 37th century.

But what if, just this once, it’s true? What if it’s the end of the universe?

In Doctor Who: Flux, the universe is in peril. Hardly that big a deal. In the new series alone the universe has been in peril four times already, and that’s just counting the really near misses. One of those actually ended the universe, although that only lasted half an hour. But looking at the trajectory of Flux, there’s a case to be made that Chris Chibnall isn’t just looking to turn the universe off and on again. He’s looking to destroy it for good.

The End Is Nigh

Let’s look at the evidence. First, and foremost, the universe is in a really bad way. Probably the worst we’ve seen it at any time when it actually exists. Countless inhabited planets have been obliterated by the Flux. A big deal for anyone who lives on them, but hardly Doctor Who’s first multiple planetary scale genocide – the Master alone wiped out whole swathes of universe with nary a thought in ‘Logopolis’.

On top of that, time is collapsing. Again, this has happened before, although admittedly it was mostly restricted to Earth and the surrounding light years. But this time, time’s not collapsing in a fun ‘Mini metros hanging from hot air balloons’ and ‘Winston Churchill wears a toga’ kind of a way. Instead, we’re seeing the worst enemies the Doctor ever faced fighting over the scraps – and they are scraps – and hoping to be the ones standing on top of the last hill of debris.

Yes, all of this is stuff that could be washed away with a wave of a magic retcon, but it is being laid on thick, and for much longer than usual, and even David Tennant making a speech and glowing a bit in the last five minutes of the episode doesn’t feel like it’d be enough to set everything right again.

Then we get to the most disturbing encounter, in the latest episode ‘Once, Upon Time’. While bouncing through her own time stream the Doctor encounters someone called Awsok, who may or may not be the White Guardian (depending on how seriously you take her hat). Whoever she is, her role in this episode is basically to tell the Doctor to give up. Not in a cackling ‘You will never defeat me’ villain kind of a way, or in a ‘But Doctor! Even you can’t destroy the Torment Nexus!’ kind of a way, but a very matter-of-fact, disappointed mother figure kind of a way.

“Lost causes are my speciality,” the Doctor says. “Not this time,” responds Awsok. She points out “the damage to time is already done” and that “This universe is over, Doctor.” She concludes “Everything has its time. Nothing is forever. Nothing is certain. Not you, and not this universe you seem to love so much.”

“Everything has its time” is a telling line – throwing the Doctor’s own words from the Ninth Doctor story, ‘The End of the World’ back in her face. She’s implying this isn’t an evil scheme succeeding, even if someone’s evil scheme is the trigger behind it all. This is inevitability. But perhaps the key phrase is “This universe is over”. It has already been implied that the Doctor is not from “this” universe, and we know that there are other universes out there.

It is something of a tradition for new series showrunners to wipe up the mess they made, tie up any loose ends, and put all the toys back in the box for the next showrunner. Perhaps Chris Chibnall’s grand plan is to hand the next showrunner, who we now know is Russell T. Davies, the ultimate blank slate.

Doctor Who’s nearly 60 years of continuity can be a challenge for the show, as we’ve looked at before with planet Earth’s frequent bouts of Dalek-related amnesia. While fans have mostly agreed that the best way to address canon is to treat as either not a concern or a silly-yet-fun game, Doctor Who continuity can still get extremely knotty (as I discovered when I (semi-)jokingly said I’d written the Doctor Who Joke Book to be canon).

Maybe Chibnall’s big endgame is to clear all that away, start off the Doctor in a fresh new universe, one that looks remarkably like our own, with no Daleks, no Master, no Gallifrey (again), and no UNIT. One where aliens have never even been to Earth (as far as we know).

It’s not a completely new idea. The Fourth Doctor and Romana spent a few episodes travelling through “E-Space”, and the Big Finish Eighth Doctor Audios spent several stories in “The Divergent Universe” to get away from their own continuity.

As for destroying the universe? Look to comics. DC’s Crisis on Infinite Earths event destroyed a multiverse to clean up its own continuity, and Marvel ended both its main 616 reality and its “Ultimate” reality during the Last Days Of… event that led into Secret Wars (although eventually 616 got better). Indeed, don’t be surprised if the MCU pulls a similar trick one day down the line.

The Kelvin timeline Star Trek movies tried to jettison all of its continuity apart from (checks notes) Star Trek: Enterprise by creating an alternate timeline. Games Workshop’s Warhammer universe was apocalyptically disposed of in its The End Times event to clear the board for the new Age of Sigmar setting that was less bogged down in continuity and (not coincidentally) more accessible to new customers, I mean, audiences.

Even Star Wars, while it never want so far as to kill off huge swathes of its continuity in-universe, unceremoniously ditched all but its core movies and TV when it was handed over to Disney, relegating everything else to the non-canon “Legends” continuity.

So what would a similar world-shattering apocalypse do for Doctor Who? First, continuity would be a lot easier to keep track of – and the BBC might even attempt Disney’s hubris and try to keep an actual, consistent canon in place for the first time. A Doctor Who in which Big Finish (whose stories far outnumber actual TV stories by now) is relegated to its Doctor Who Classic reality, while the new series explores its brave new continuity.

While Sony would probably prefer that (because that’s a thing that might affect things now?) it doesn’t seem like the sort of play that would be made by Russell T. Davies, who largely treated canon as something fans enjoy arguing about but which should never get in the way of writing whatever he felt like.

It does offer possibilities that might be appealing to him, however. First, let’s be real. Killing off Daleks, Cybermen, Sontarans etc. with the universe imploding isn’t going to be the end of them at all. It would take approximately half a season for the Doctor to discover, to their horror, that this universe has its own Skaro! And of course, Cybermen keep happening. But now you can pick and choose the bits of the classic bad guys you like, leaving behind the bits you don’t.

But more than that, every historical figure is now back on the table. Queen Victoria, Elizabeth, Charles Dickens, Shakespeare. Don’t like that rubbish Sixth Doctor story with H.G. Wells? Irritated that Leonard Da Vinci is off the board after he painted those fake Mona Lisas? Well now we can do them properly. What’s more, all the old characters can now be recast! We can have Brigadier Lethbridge-Stewart back! Meet Sarah Jane Smith again! Not just the Doctor, but an entire universe, regenerated.

Maybe you think this is genius, maybe you think it’s the worst idea ever. It certainly has its flaws. Personally, I think it would be a bit grim if the first ever woman Doctor turned out also to be the first Doctor to actually fail to save the universe. But something about it seems like it would chime with someone whose solution to ‘All Doctors are old white men’ is ‘Retcon in an infinite amount of previous diverse incarnations’ (again, whether you like that idea or not).

Would it Actually Work?

So, whether or not this is Chibnall’s plan, the question remains: would it work?

Firstly, is it even necessary? While Doctor Who has a vast and labyrinthine continuity and a rich and deep universe, the truth is the only concrete part of the universe is exactly one TARDIS console room wide, and even that’s prone to redecoration. The TARDIS can plonk down anywhere, anywhen, and when the doors open anything in previous stories is only relevant if the writer feels like it should be.

Secondly, it’s harder than it looks. Both Russell T. Davies and Steven Moffat tried to reduce the character from “semi-mythological god character” to “travelling weirdo”- in the new series’ third ever story, the Ninth Doctor tries to delete every reference to him on the Internet, and the Prime Minister’s still calling for him by name by Christmas.

Moffat faked the Doctor’s death, wiped him from the Daleks’ memories and had the Doctor go backwards through time individually deleting every mention of him on record, and still when the Doctor turns up at an underwater base in the 22nd century everyone knows who he is (partly because of his multiple stints as PRESIDENT OF THE PLANET EARTH).

As any Doctor Who writer who’s tried to kill the Daleks forever, or the Master, or blow up Gallifrey, has found, the Doctor Who universe is enormously self-correcting. Even if you wipe out the entire thing, how long will it be before some future showrunner makes a massive event two-parter finale out of bringing the old universe back But still, whatever criticisms you level at Chris Chibnall, he is not afraid of making the big changes. I’ve been wrong before, but does this story really feel like one that will culminate in the hitting of another reset switch?

Doctor Who: Flux continues on Sunday the 21st of November on BBC One, BBC iPlayer and BBC America.