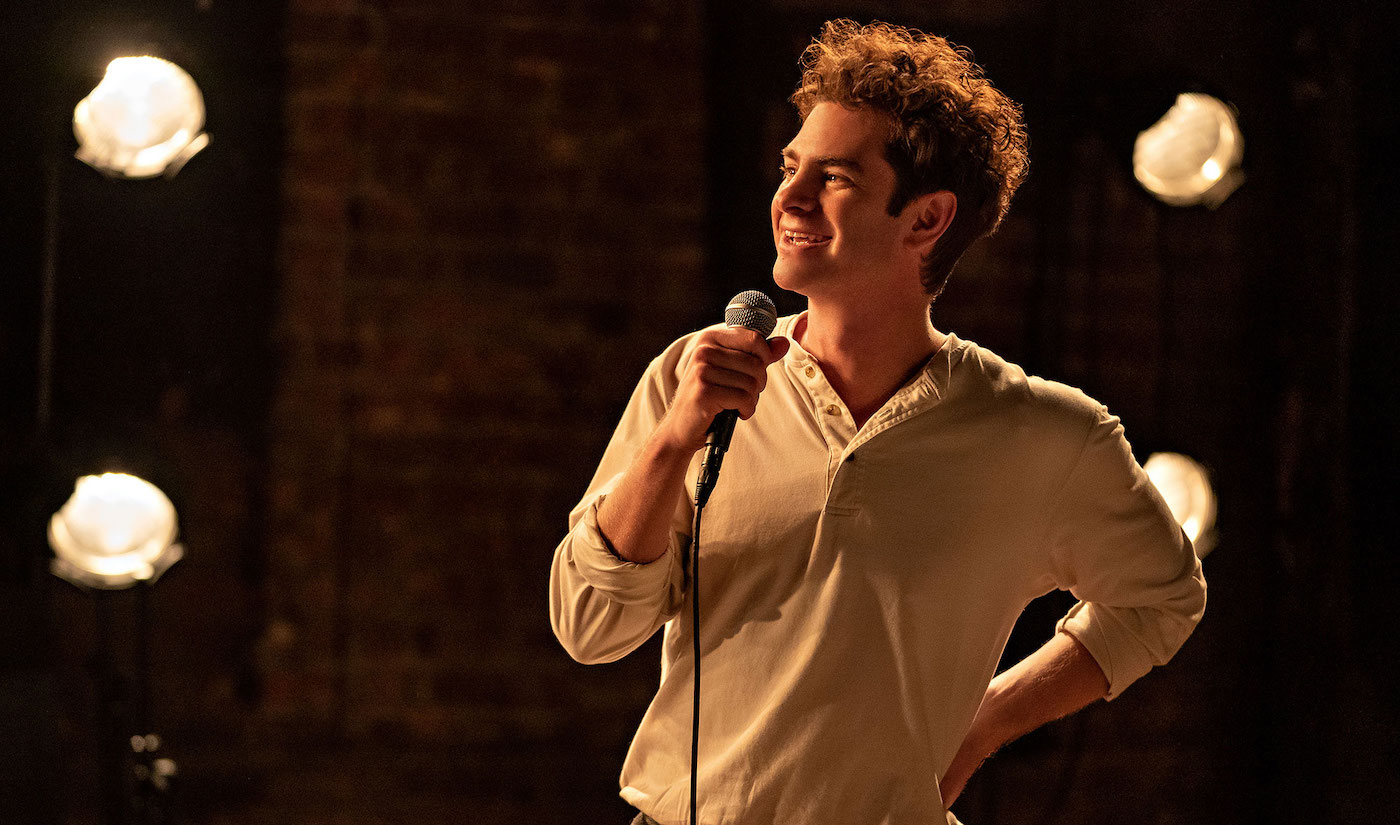 It would take a unique kind of audacity to reach out to Stephen Sondheim and insist he be your mentor. But then it took a unique kind of audacity—and pain, and tears, and talent—to be Jonathan Larson. As the brilliant if ill-starred artist who wrote a generation-defining musical in Rent, and then didn’t live to see it performed once in front of an audience, Larson was a singular voice who throughout his short life burned like a Roman candle, dazzling many all too briefly. That includes Sondheim.

This dynamic is brought to life in Lin-Manuel Miranda’s profoundly impressive debut as a film director: tick, tick… BOOM! The movie is based on what was once Larson’s Off-off-Broadway one-man show, an autobiographical tale of misery and self-doubt written before Rent. But on-screen, Miranda dramatizes this dynamic between Larson and Sondheim with multiple actors, including Andrew Garfield’s frazzled yet resilient Jon, who has just performed an early draft in school of what would be his first musical: the never produced Superbia. Bradley Whitford, meanwhile, underplays Sondheim with an avid aloofness in only a few scenes. In them he quickly surmises what could be said of much of Larson’s body of work: “The world you’ve created is really original, fascinating. The problem is it’s not particularly easy to follow the emotional thread, the details distract us from connecting with the characters.”

It’s a criticism that would cling to all of Larson’s theatrical works, including for some Rent and the original one-man version of tick, tick… BOOM! So it’s a credit to Miranda as a first-time director that he transfers the material with such insight and elegance that the material feels at home in front of the camera, as if this is where it naturally belonged. As both an artistic adaptation and bittersweet biopic about Larson, it is an achievement, not least of all because it leans into Larson’s eerie ability to predict his own end with his show’s foreboding title and its ever palpable dread that the lead character—Jonathan Larson—is running out of time.

Garfield inhabits this frustrated anxiety like only he can see the invisible chains of Jacob Marley hanging from his shoulders, and he is literally belting for the world to notice before it’s too late. It is a remarkable turn from the British actor who is not a natural singer. So he insteads digs into the emotions of the songs, making them clear as a bell, and often as agonizing as a funereal trumpet.

This performance is the centerpiece of a film that lives in the head of Larson during a turning point in his career: Ten years after moving to New York City he’s still waiting tables at the Moondance Diner and still working on the Superbia musical. And he’s about to turn 30. He has one supporter in the theater world who’s at least agreed to do a workshop of the show, but if the musical is not picked up by a producer there, it will mean eight years of Larson’s passion might’ve been for naught.

It’s perhaps for this reason Larson is so neglectful to the friends and loved ones who are waiting for him to see beyond his own creative frustrations. There’s Michael (Robin de Jesus) who’s been Jon’s best friend since grade school and his longtime NYC roommate, but Michael’s given up the acting bug and gotten a job in advertising—and he has the new luxury apartment he’s moving into to prove it. Then there’s Susan (Alexandra Shipp), Jon’s longtime girlfriend who’s also ready to make a big move, agreeing to teach dance in Massachusetts and hoping Jonathan will follow her to New England.

Even so, Jon can’t be bothered to ever really engage with either of them, as he’s convinced a clock is ticking for him and he needs to express himself—he needs to make a dent in musical theater—before time runs out. Maybe he’s just being melodramatic, as his friends suspect, or maybe he’s keyed into his early ‘90s moment as more and more twenty-something friends are being laid to rest while the AIDS epidemic cuts through New York like a plague.

tick, tick… BOOM! is an elaborate dance between disparate elements before even the often propulsive songs are thrown into the mix. And yet, the film never appears cluttered or top-heavy despite its juggling of even electric musical styles, which range from Larson’s more famous rock opera fusions to his questionable dabbling here in late ‘80s rap, and even a classical ode to Sondheim’s Sunday in the Park with George.

While Miranda’s own first musical success got the Hollywood treatment earlier this year with the light but soaring In the Heights, Miranda’s personal foray into directing for the screen feels surprisingly different. Rather than savoring the sweet and romantic artifice of his own work and more traditional movie musicals, tick, tick, BOOM! better resembles choices made by Bob Fosse in the 1972 screen version of Cabaret. Like that movie, Miranda embraces the cinematic medium’s ability to intercut between musical numbers on the stage of Larson’s mind—or in his rehearsal space—with the real world dramas and slights which occur in his increasingly fraying relationships with Michael and Susan. There is also a similar grit and appreciation for urban decay in the film’s compositions and location choices.

This is very much ‘80s New York, even if the film is technically set in 1990. Despite these folks frequently bursting into song and even running into Broadway stars who make discreet background cameos—I spotted Christopher Jackson, Phillipa Soo, and I believe Patti LuPone on first viewing—the film surprisingly avoids feeling twee or syrupy. There’s a gritty despairing quality here, which Garfield’s perpetual state of agony keeps always at the foreground, as does de Jesus’ sympathetic if exasperated performance as a fading friend.

There is also that element which hangs like a pallor over tick, tick… BOOM! just as it did Larson’s most famous work. The AIDS epidemic is not as foregrounded as in Rent, but its presence being a constant shadow looming over the lives of Larson and his friends makes it feel a lot more insidious and authentically terrifying to a modern eye that’s seen New York go through another plague 30 years later. It’s also an interesting snapshot given that Larson and Rent have been increasingly dismissed in recent years for trivializing or appropriating a time of horror and righteous fury within the gay community.

But tick, tick… BOOM! brings a more tangible portrait of that actual horror, and how it impacted Larson’s own personal life, back into the center spotlight. Miranda and Garfield avoid some of the gaudy trappings of traditional movie musicals, including Christopher Columbus’ glossy Rent movie from 15 years ago, and zero in on the outrage which has always been under the surface of Larson’s work, as well as the dogged optimism that was never rewarded in his lifetime. The emotional thread is clear, tight, and devastating.