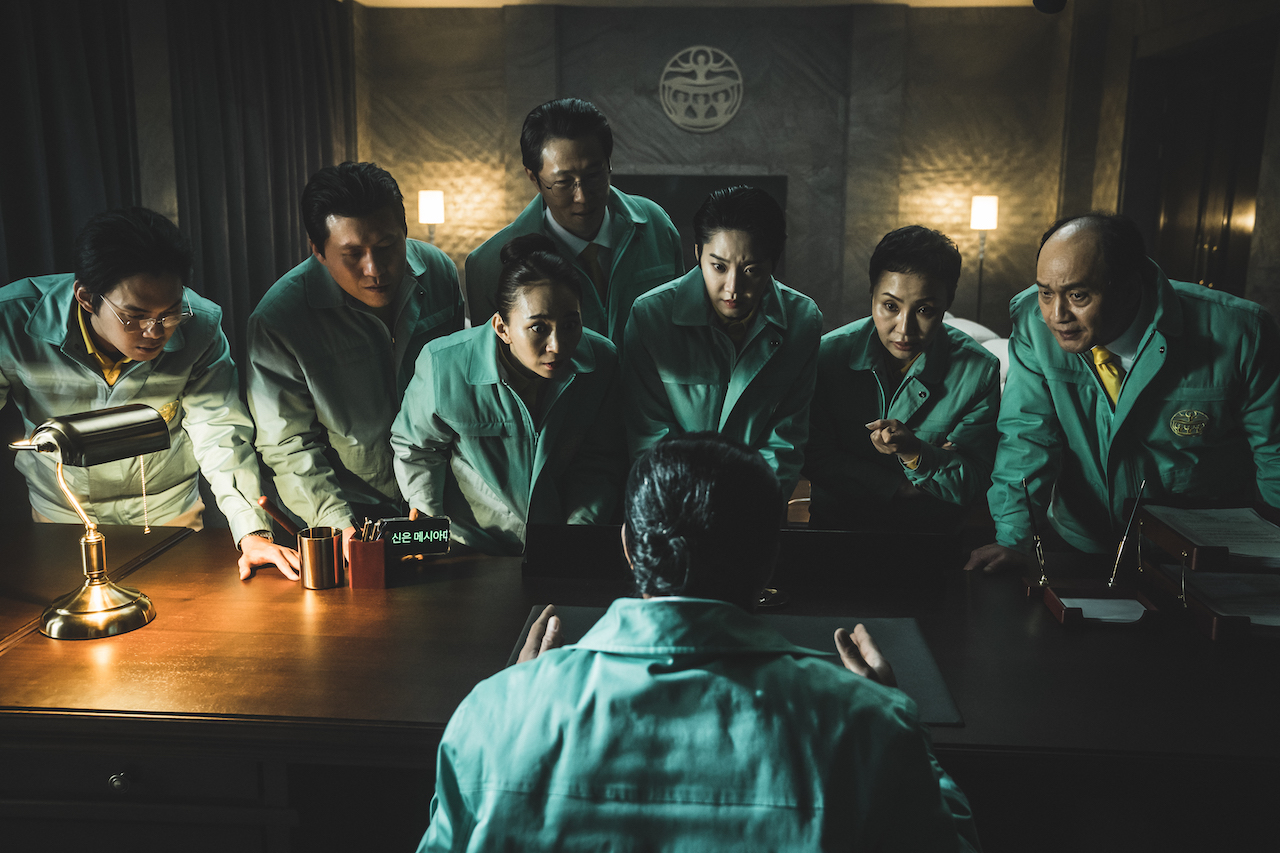 This Hellbound article contains MAJOR spoilers. You can read our spoiler-free review here.

Heading into Hellbound, I can almost guarantee you could not guess how the Netflix series would end its six-part first season. So many beatings, one precious newborn baby, and one time jump later, the Korean drama races towards its unpredictable, snowy conclusion in the backstreets of Seoul, leaving fans with both a satisfying (and surprisingly hopeful) ending to the first season as well as so many lingering questions about what might happen in a potential second season. Here’s everything that went down in the Hellbound season finale…

If you went into the final episode of Hellbound believing that this show was actually going to show a baby getting murdered by monsters, then you weren’t alone. The brutality of this Netflix series is noteworthy, and I wasn’t sure where they would draw the line. In the end, it was at baby murder.

In Episode 6, Sohyun is initially intending to accept the death of her baby, but, at the last minute, she decides against standing passively by. She dives in front of one of the incoming demon-monsters, scooping her baby away. She, husband Youngjae, and lawyer/badass Min Hyejin manage to fight the three monsters off for a few minutes, as Kim Dongwook’s neighbors bear witness with their eyes and smartphones.

But they can only fight off the monsters for so long. Eventually, Youngjae and Sohyun make it their final action to protect their baby, aka Toughie. They secure the newborn between the two of them, and Youngjae ties their family together. When the monsters use their light-powers to burn the baby, Toughie survives, truly earning her moniker. Youngjae and Sohyun die in the effort.

Dongwook Believes He is a Messiah

One of the major twists in the Hellbound season finale is that the man who has taken Hyejin, Youngbae, Sonhyun, and Toughie in is Lee Dongwook, the man responsible for the yell-y Arrowhead livestreams pre-time jump. We learn via narration and flashback that Dongwook stopped his broadcasts following a demonstration telling him he would die in three years. The pronouncement seriously challenged Dongwook’s belief system. Previously, he lived by the New Truth’s doctrine and believed that the “sinners” must be punished.

Though the demonstration shakes his faith, Dongwook rebounds when Toughie and co. show up at his door, ready to dive back into the maniacal, power-driven system he was once an influential part of. He calls Chairman Jeongchil and the New Truth Committee to get corroboration on what he already believes to be true: he is a messiah, and God has given him a special mission. It turns out Dongwook’s demonstration time is only five minutes after Toughie’s, so he plans on making it look like the newborn decree video was fake, and that he is the only one God was coming for that day. It’s not really a foolproof plan, but it gives the New Truth leadership a lead on where they might be able to find Toughie, and it gives Dongwook the sense of purpose and meaning for both his life and death that he so desperately wants.

From there, Dongwook dusts off his mask and paint, and immediately begins inflicting violence in the name of God. First, he kills one of the Sodo members coming to help set up the broadcast. Then, he goes after Youngbae, Hyejin, Sohyun, and Toughie. Hyejin takes him out for a while, but he pops back up after Sohyun and Youngbae’s sacrifice, with plans to kill Toughie. Before he can stab the baby, Hyejin tackles him, and the demon-monsters show up to kill him.

Change takes time (as demonstrated by Hellbound‘s mid-season time jump), but the world also seemed poised to accept the realization that the New Truth Society is a bunch of power-hungry bullies because, after witnessing Toughie’s survival, they almost immediately begin to turn against the deacons of the New Truth. After all: How could a newborn be capable of sin, if the “original sin” doesn’t exist? And, if that didn’t already get you thinking, how could the demon-monsters kill two people who were not sentenced to death, and leave a third who was pronounced to die alive?

Deacon Yuji shows up to the scene of the demonstration too late to stop the broadcast, and is very angry as a result, especially after having been shamed and reprimanded for his previous failures by Chairman Kim Jeongchil. When an older man turns against him, calling the New Truth “pathetic crooks” and “a bunch of liars,” he beats the man unconscious. Society has been tolerant of this level of violence (and more) from the New Truth and the Arrowhead before, but not in this moment. The crowd is horrified, as is one of the policemen standing by.

For most of the post-time jump story, the cops have been willing to do whatever the New Truth Society tells them to do, but apparently no longer. Or at least not this cop. He arrests Deacon Yuji for battery, and takes him away in handcuffs. The deacon cannot believe it, yelling of “God’s will” as he goes. But, with one act of parental love and protection, the damage is already done. The New Truth’s power has been seriously challenged, and people are finally willing to listen to the accusations against them.

Hyejin’s Escape & The Message of Hellbound

After the deaths of Sohyun, Hyejin scoops up Toughie and limps off into the night. Her exit is protected by the bystanders who watched everything go down; they stop the New Truth Society and the police from following Hyejin and Toughie.

From there, a bruised and bloody Hyejin hails a cab, and asks to be driven as far away as possible on the main street. At this point, so many people have betrayed Hyejin when she is vulnerable and trying to proiect the innocent. Not this time, though. The cab driver, an older man, recognizes Hyejin on site, but signals that he will help keep her safe, noting that they will take a different road in order to avoid a police checkpoint. It’s then that he more or less delivers the theme of this show’s first season: “I don’t know much about God, and I don’t even care,” the cab driver tells a weary Hyejin. “But there’s one think I do know: and that is that this world belongs to humans. And we should settle our matters ourselves.”

The man—and the show itself—are making a statement about the potential danger of religion, or at least religious fanaticism. In human history, too many have used God as an excuse for selfish, hateful, and harmful behavior, as an excuse for accumulating and/or consolidating power. Many films and TV shows that make this argument tend to be atheist or agnostic in their world-building; Hellbound, however, has built the likelihood of some kind of higher power into its world-building. That makes the series’ argument that we must create just, human systems that both work to protect the innocent and that offer the chance for taking accountability and seeking redemption for those who have sinned all the more powerful. Or at least it does to me.

What Happens to People After They Die on Hellbound?

Um, no one knows. They could legitimately go to hell, and I kind of love that this series doesn’t answer this question in the first season, as this is how we all live life too: unable to truly know what happens to a person after they die. Interestingly, in Hellbound creator Yeon Sangho’s early-naughts short film with a similar premise, decrees do not always mean a death sentence to hell (though they do always mean a death sentence). Sometimes, a person will get a pronouncement of their death accompanied by the news that they will be going to heaven. This doesn’t seem to be the case in Hellbound, though.

Park Jungja Comes Back to Life

While we may not know what happens to people after they die in a demonstration, the ending of Hellbound Season 1 offers up the potential method we may find out in Season 2 in the form of Park Jungja…

The final moments of Hellbound Season 1 take place at one of the New Truth’s “sacred spaces,” aka sites of demonstrations that have been made into tourist attractions for followers of the society. Park Jungja’s death at the hands of the mysterious supernatural monsters was the first broadcast of a demonstration at the hands of the New Truth, which makes it a special spot. It’s where we return to for Hellbound‘s last scene, which sees the crispy corpse of Jungja re-formed into life. Park Jungja wakes up, naked and alone, sucking oxygen into her lungs presumably for the first time in four years. And I am already hoping we get to see her reunite with her definitely still traumatized children, who I hope have been living their best lives in Canada.

Will Chairman Jeong and the Others Return Too?

The return of Park Jungja leads to many other questions, but the biggest one is: have other demonstration victims returned too? While Jungja was the first victim we got to know before her demonstration, the show starts with the killing of a man outside of Hapseong Station. Has he returned? Will he return? Will Chairman Jeong, the person who started this entire New Truth business, return? Was this a result of Toughie’s survival, or of Sohyun and Youngbae’s un-decreed deaths at the hands of the demon-monsters? And how will society react to Park Jungja’s return. We better get a Season 2.

What did you think of Hellbound’s ending? Let us know in the comments below!

Other Space | Comedy Sci-Fi Series | Coming Soon to DUST on TV
Snowpiercer, Infinity Train and Other Erased Streaming Series You Can No Longer Watch
The Last of Us: Can Ellie Infect Others?
The Last of Us: How Long Does It Take to Beat the Games?
Arrow Season 6 Episode 16 Review & Reaction | AfterBuzz TV