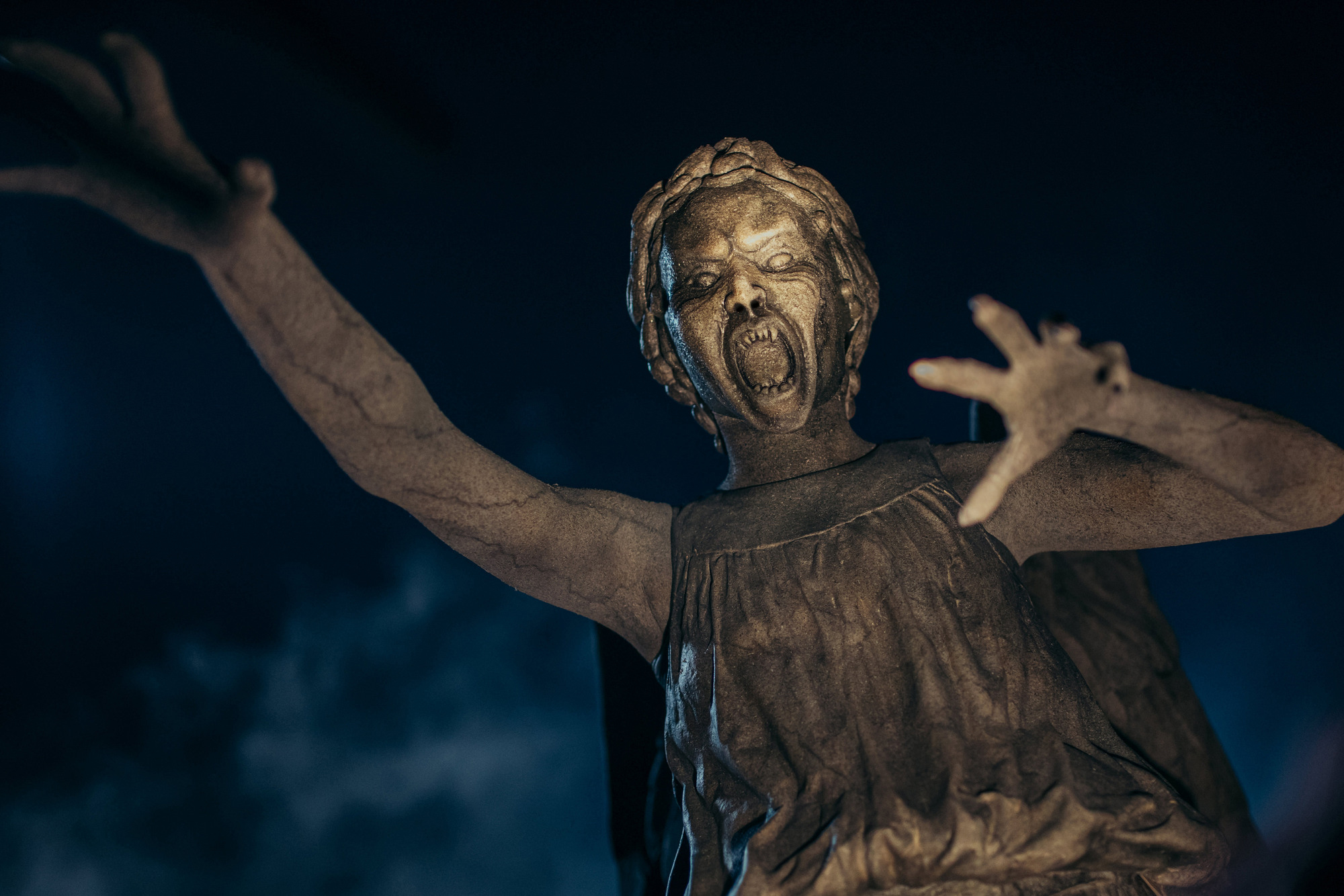 Remember Class? Nobody would blame you if you didn’t, as Coal Hill Sixth Form’s finest failed to make much of a splash when the show originally landed. If you did stick with it to the end, though, the final episode revealed that the mysterious School Governors at Susan’s old stomping ground were, in reality, Weeping Angels. Creator Patrick Ness was intending to script an angelic “civil war” if a second series had gotten the go-ahead, which indicates just how tempting a prospect the Angels can be to a writer – every showrunner wants a chance to tackle the Lonely Assassins.

This is trickier than it sounds. As early as their second appearance in ‘The Time of Angels’, Steven Moffat was already having to rewrite the rulebook for his beloved baddies, trying to counter all the ways fans had come up with to defeat them in the wake of the phenomenal ‘Blink’ – well-placed mirrors, shoals of fish, that sort of thing.

In response, Moffat made the Angels even more capable. Find a way to fix your gaze on one and it’ll eventually crawl inside your brain and take over. Point a camera at an Angel? It can come crawling out of the monitor. You’re carrying a torch? They’ll drain the battery, and so on, and so on.

Each successive story runs the risk of making the Weeping Angels a little too powerful, to the point where they’re basically unstoppable. This is probably why Chris Chibnall and Maxine Alderton (whose last episode was the excellent ‘The Haunting of Villa Diodati’) mostly stick to the statues’ pre-established powers, rather than trying to come up with yet more ways for them to menace Team TARDIS. (Mostly being the operative word…)

When the episode opens, there’s the small matter of a Weeping Angel at the TARDIS console, meddling with the lights so that it can flit about the controls even with the Doctor, Yaz and Dan gawping at it. The Doctor’s solution is to reboot the TARDIS, whatever that entails, at which point “dimensional compression should eject quantum life-forms” – an explanation I was hard-pressed to hear over the roaring sound effects. This isn’t the first time Doctor Who: Flux has had scenes muddied by a dodgy audio mix, which is odd given that the team usually put a lot of care into the show’s production.

After the Angel is expunged, the TARDIS is deposited in 1967. It’s mistaken for a real police box by an elderly couple named Gerald and Jean, who are out looking for a missing girl along with the rest of their village. The Doctor’s far more interested in whatever’s making her screwdriver all toasty, though, so she leaves her companions to help with the rescue efforts while she follows the sonic scent. Yaz’s efforts to properly organise the search party don’t exactly go down well with Gerald, who seems to resent having to participate at all, even when the missing Peggy is revealed to be a relation.

None of these villagers get much in the way of character development, but then they’re mostly in the story to be fodder for the Weeping Angels. The exception is Professor Jericho, played by the always-marvellous Kevin McNally, who’s been conducting psychic experiments on one Claire Brown – the same Claire we last saw getting zapped by an Angel in ‘The Halloween Apocalypse’. The Doctor arrives to interrupt his study, as do a number of Weeping Angels, who begin to lay siege to the Professor’s house.

This sets the stage for the episode’s A-plot: the Doctor, in a confined space with limited resources, fending off attacks by the Angels and relying on her ingenuity to get everyone out safely. It’s a solid premise and by no means a guaranteed victory. When facing the Lonely Assassins, the Doctor has a history of losing, or at least losing her companions.

Meanwhile… Bel’s back! The continuation of her trek across the universe is an unexpected diversion, but serves to remind us that galactic civilisation continues to suffer in the wake of the Flux, which may well drive events in next week’s episode. Still seeking to reunite with Vinder, she arrives on what’s left of the planet Pizzano, ultimately discovering that Azure is harvesting the survivors and taking them prisoner in yet more Passenger forms. Are the Ravagers anticipating another confrontation with the Doctor, or are they simply cleaning house? We still don’t really know what their endgame is right now.

As for Yaz and Dan, they’re easy prey for another Weeping Angel and find themselves whisked back to the village, only now they’re in 1901. They find the missing Peggy here, but that’s about it for the town census, as the Angels are at this point in history too. We soon learn that they’ve done more than snack on the locals – they’ve ripped the entire village and its timeline out of causality, effectively trapping everyone within its crumbling boundaries.

Back in ’67, once the Doctor’s been beaten back to the basement by the advancing Angels, Claire decides it’s time to ‘fess up to what the audience has already glimpsed. Much like Amy in ‘Flesh and Stone’, she’s got an Angel in her mind; one that’s been lurking ever since she had a premonition of this day’s events. Since the image of an Angel can itself become an Angel, her vision left Claire carrying a psychic passenger, and the Doctor has no choice but to dive into Claire’s mind too and find out what’s really going on.

Quite a lot, as it turns out. The rogue Angel hiding out in Claire’s brain is on the run from its kind, but this is far from aping Patrick Ness’s civil war ambitions. The Weeping Angels in this episode are a tactical squad working for none other than the Division. (Or just ‘Division’, as the Angel insists on calling them. Is this merely an affectation or some kind of hint?) They’re here to recapture the rogue who’s absconded with all of the Division’s secrets – and those include the Doctor’s missing memories, giving Claire’s Angel some leverage.

While this is going on, we cut back to Gerald and Jean, who have discovered the quantum extraction that’s displaced the village. Having been set up as unsympathetic characters, it’s clear that something nasty’s going to happen to the couple sooner or later, but their grim fate rather does mess with the established logic of the Angels – assuming a word like ‘logic’ can be applied to a sci-fi species of time-thieving gargoyles. Firstly, Gerald gets zapped back in time because he happens to touch an Angel while it’s in a statue form, but why? Not only have we already seen people touch Angels while they’re quantum-locked with no ill effects, Jericho and Claire do so later in this same episode and are fine.

Secondly, once Gerald and Jean arrive in 1901, they’re immediately accosted by another Angel and because “nobody survives it twice”, the next touch turns them to stone. And then they just kind of… explode. Fair enough, but we know that people do survive it twice, because that was the point of the Angels’ battery farm in ‘The Angels Take Manhattan’. (The Doctor Who audience tends to notice these details in the same way they notice, say, when an Angel the size of the Statue of Liberty is able to move around New York City unseen…)

Back in Claire’s mind, the Doctor is understandably tempted by knowledge of her past in exchange for protecting the Angel, but before anything can be agreed upon she’s rudely awakened by Professor Jericho. The Angels have made it into the basement, which means it’s time to leave through the only other route the Doctor can find – an old tunnel that runs to the edge of the village, but which also passes right through the heart of the dig-site-meteorite-thingy the Angels used to reach Earth in the first place.

Even though we got used to the Angels’ jump-scare antics long ago, there are still some cool, creepy moments throughout this episode. The scene where the Doctor attempts to destroy an image of a Weeping Angel by burning it, only for the Angel to continue reaching out for them but now it’s made of fire is particularly effective. So too are the staging and visuals of this whole, claustrophobic tunnel escape sequence. All the grasping Angel arms extending from the walls and ceiling are really quite unsettling.

Emerging in front of a breach that connects 1901 and 1967, the Doctor learns the truth about the quantum extraction and the fate of her companions. Backed into a corner, she tries to bluff the rogue Angel into leaving Claire’s head, but unsurprisingly, it has other plans. “The only thing Division wants more than my Angel,” Claire explains, “is you.”

The Angel army begins to glow, trapping the Doctor in her very own magical girl transformation sequence and… are those? Is she? She IS! Our favourite Time Lord has not only been unceremoniously drafted back into the Division, she’s now a Weeping Angel to boot. And that, bar a Marvel-style mid-credits scene that shows us Vinder and Bel getting ever closer to reuniting, makes for one whopper of a cliffhanger. The ending credits music is missing the ‘da-da-da-dum’ – perhaps because now that she’s an Angel, the Doctor’s hearts are no longer beating?

There’s a lot to digest here, because we still have so many unanswered questions and the ‘Next Time’ teaser doesn’t begin to answer any of them – although it does at least tease the return of Kate Stewart squaring off against the Grand Serpent, putting to bed my lingering curiosity about what the Doctor’s earthbound chums are up to during all of this.

It’s still a little unclear what the Angels’ plan was. It’s suggested that they arrived via meteorite in 1901 and promptly attacked everyone in the village, presumably displacing them in time and then laying low underground. One of their number then catches up to Claire more than a century later, sending her back to the village circa 1965 where, you’d expect, the Angels would be waiting to apprehend her – except they don’t strike until 1967, on the day the Doctor shows up. Is it possible that the Doctor was their target all along, despite the rogue Angel’s claims?

For as tense and engaging as the scenes in Jericho’s house were, and as exciting as the episode’s climax proved to be, it’s a shame that Yaz and Dan were pretty much wasted in this episode. Much of what they got up to could charitably be described as “wandering about”, and hopefully they’ll have a meatier share of the story next week. The teaser hints at a big leap forward in their personal timelines and shows Yaz breaking into some sort of tomb, so fingers crossed.

Some Angel inconsistencies and other quibbles aside, this is a strong episode weighed down only by its lacklustre use of the companions, with some effective scares and yet more plot revelations to chew over. Why is the Division still operating if Gallifrey has been destroyed? What of Claire, surrounded by Angels in 1967? How long before someone cosplays as Weeping Angel Whittaker? More importantly, with only two episodes to go, can Doctor Who: Flux stick the landing? We’re coming close to finding out…

Doctor Who: Flux continues on Sunday the 28th of November on BBC One, BBC iPlayer and BBC America.