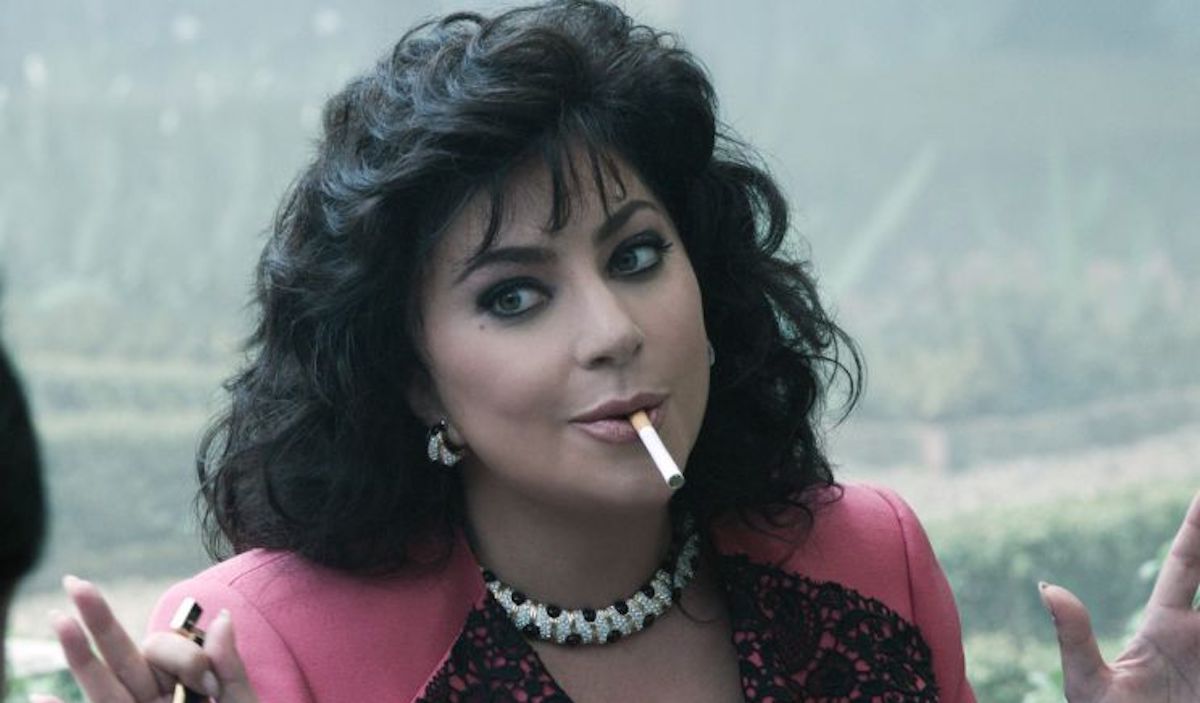 Lady Gaga’s journey as an actress has been remarkable. Once the vamping vampire in Ryan Murphy’s American Horror Story—where she wasn’t asked to do much more than strut—she soon revealed herself to be genuinely effective in A Star Is Born. With palpable insecurity and a hell of a ballad written by Gaga herself, that character believably lived in the singer’s world if not her personal headspace. Now in House of Gucci, Gaga finds a real high note, announcing she’s a major thespian and feasting on a role so vain and consumed with avarice that it perhaps took a pop star to know you can never underplay it.

Gaga commands the screen of Ridley Scott’s second film in as many months so thoroughly that it might as well be taking place on a stage in Madison Square Garden. But as good as she and other aspects of the movie are, you might also rather be at an arena concert than sitting through a movie with all the pieces to be a camp epic, but which nonetheless are inexplicably played straight and even demurely by the film’s maestro. House of Gucci positions itself to be the stuff of great tragedy. There’s decadence; obscene wealth; a family business in ascendence while said family is in free fall. And yet, this fall of the House of Gucci feels closer to a laborious true crime podcast than it does opera—and at over two and a half hours that’s a problem.

Based around events that led to a murder which rocked the fashion world, House of Gucci first introduces us to Gaga’s Patrizia Reggiani when she is neither in the Gucci family or their business. That soon changes when she meets Maurizio Gucci (Adam Driver) at a swanky Milan nightclub. Quickly deducing he’s worth a lot of money, she endears herself to the nebbish Gucci if not his proud and mercurial father Rodolfo (Jeremy Irons). Maurizio sees a sweet girl who’s anxious for him to kiss her on a chaste Sunday morning boating excursion; Rodolfo just sees the anxiousness, and the darting eyes that go with it.

Despite papa’s protests, Maurizio marries Patrizia and is happy too, living with her humble family and escaping from his father and grandfather’s empire. Patrizia, meanwhile, is patient. She’s the type to find contentment in anticipation if not matrimony. Things change soon enough when they receive a call from Aldo Gucci (Al Pacino). The brother of Rodolfo and business mastermind behind the company by 1980, Aldo is looking for a true heir since his flamboyant son Paolo (Jared Leto under a pound of makeup) is an idiot. Aldo thinks he’s found his match in Maurizio, but when he invites the nephew to join the business in New York, he’s actually met his better. Upon arriving in Manhattan, Patrizia’s wolf has entered a house of aging hens.

Set in a world of high fashion and higher opulence, House of Gucci is nothing if not gorgeous to look at. As a man who once considered being a designer by trade, Scott brings again the same painterly eye that makes so many of his pictures a visual delight. Unleashed on the fashion world, the director wallows in the small details, such as how the seamstresses and models dance like marionettes beneath their moneyed benefactors, represented here as loudly as Leto in a fat suit downing glasses of champagne in the catwalks above.

Even so, for all the film’s excesses and propulsive ‘80s pop song grooves, the movie feels faintly bare and distant. It’s even clinical in its often gray color palette. Which is not to say the film is disinterested with its ensemble of eccentric characters. The screenplay by Becky Johnson and Roberto Bentivenga thrives on Patrizia’s manipulations and indulgences. However, the finished product neither judges or particularly celebrates its central character’s cunning; rather it just observes her like a reality TV producer enamored with their muse.

In that role, Gaga can be delicious. She plays Patrizia as a woman who’s regal before she has power yet remains desperate even after attaining it. Her turn is also well paired with Driver’s more introspective counterpoint. Making even a so-so Italian accent seem natural and right, Driver is restrained where Gaga is grandiose. But the film never decides which instinct should dominate their passion play. Driver fits the movie’s desaturated aesthetic, but the rest of the ensemble is asked to cultivate a tone wherein Pacino’s standard scenery-chewing appears small by comparison.

Indeed, Pacino looks like a modest performer when partnered in many of his scenes with Leto, who in his bald cap, extravagant mustache, and leisure suits would be considered a bit much even on SNL. I know there’s been some Oscar buzz for Leto’s turn as the Gucci black sheep, but frankly there were more grounded “Italian” line readings in Super Mario Sunshine. With that said, such choices give newfound appreciation for Scott insisting none of his American actors attempt French accents in The Last Duel.

Similarly, the contrast between the two new Scott pictures is fascinating given their proximity. The Last Duel is one of the best pictures of 2021, and certainly one of the most underrated. But where that movie handled sensitive subject matter with intelligence and delicacy, House of Gucci takes on potentially gaudy material and fails to shape it into much of anything. Perhaps if it was a movie more in line with Leto’s performance, it could’ve worked as a soapy kitsch extravaganza, but in its current form the movie has the length of one of Scott’s great historical epics but the instincts of a Deuxmoi post looking to spill the juiciest tea. Well, by film’s end everything’s spilt, but even as a mess it’s kind of a bore.

Happy Valley Series 4 Won’t Happen, and That’s Perfect
Loki Season 2: The Timekeepers Are Back in New Trailer
Is This Succession Character Harboring a Painful Secret?
Arrow Season 6 Episode 16 Review & Reaction | AfterBuzz TV
Forspoken Is That Frustrating Piece of Entertainment That Gets Good “Eventually”