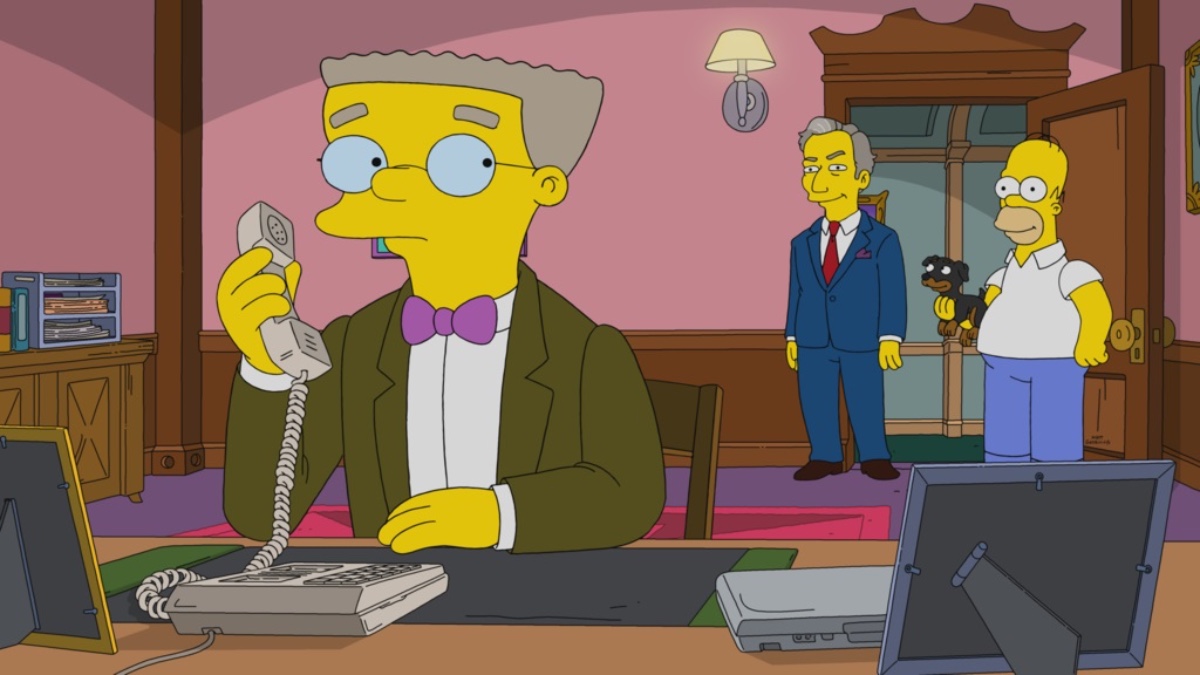 The Simpsons season 33 episode 8, “Portrait of a Lackey on Fire,” is a celebration of the long-running series’ most closeted icon. For years, Waylon Smithers did time as an all-too-standard bearer of hidden identity in a workplace where labels stick with the half-lives of atomic residue. The innuendo-laden repartee with his boss, Mr. Burns, includes some of the cleverest writing of the series. In earlier seasons, Smithers’ personal life barely intruded into the office, unless you had to get past his network firewall to see his introductory screensaver. Here he is gifted with the most fashionable accessory, a fully realized episode.

The story opens on the Burns estate. We see his mansion and his hounds’ McMansion, and learn of his new litter of priceless Louis Dobermann puppies, apparently descended from Karl Friedrich himself. Smithers trains the puppies to be to be murderous enough to be doled out as guard dogs to whichever of Burns’ richest allies sent the most flamboyant bribe. Homer is reassigned from Sector G to be the attack dummy during training, giving him some alone time with Smithers.

Homer and Waylon have always maintained a wary respect and admiration for each other, as co-workers, co-conspirators, and occasional friends. Smithers once wept as he gave the order to have Homer’s legs broken for saving Burns’ life, and they have saved and cost each other their jobs in equal measure. The conversation which leads to the romantic set-up is enhanced by the characters’ histories, even as the words have little relation to it. But Homer’s glee in trying to find Waylon’s Man-Marge is moving.

Homer outdoes himself, giving the series a nuanced love interest, and Smithers’ the pick of the litter. Michael DeGraff, voiced by Victor Garber, a Fortune 500 fashion designer who not only has wealth and riches, but money. Enough to hire Christine Baranski to sing the soundtrack to Mamma Mia! for a simple brunch, or cancel a trip to Milan to fall in love in Springfield. Michael, also well-known as a judge on “America’s Got Fabric,” whose catchphrase can bestow stardom, as his putdowns can topple civilizations. He compares Marge’s sisters to the ladies of Grey Gardens, who had a look as opposed to the Bouviers’ “don’t look.” Don’t get him started on Milwaukee.

Marge’s thirst for gossip is a fantastic bit. It grows from barely-contained curiosity to full-blown mania. She’s waiting for Homer when he gets in his car, switches to her car, and winds up on the bus to work in a sequence so infectious, it could have added one more payoff without going overboard. As ebullient as Marge can be, she is also a master of grand understatement. Homer’s best and most astute line of the evening has to do with unconditional love. It’s the best, because the conditions will kill you. Marge’s best line of the installment comes when a very smitten Smithers asks when she knew Homer was the love of her life? “After he got me pregnant, I just knew he was someone I’d have kids with,” she says. And he is delighted. Together, these two sentiments capture the heart of the Simpson family.

The Simpsons presents a nuanced LBGTQ cross-section. The episode owns the cliches the community has claimed for themselves, and satirizes the stereotypes with empathetic alternatives. An old school self-loathing closeted lesbian from the old country learns to love the freedoms in the new world, except not to swipe on Grindr. Comic Book Guy might declare “Portrait of a Lackey on Fire” as the “Gayest Episode Ever,” which happens to be the podcast showrunner Matt Selman credits for recasting gay Cuban character Julio from Hank Azaria to Tony Rodriguez. But it still has stiff competition from the episode “Homer’s Phobia,” which guest-starred John Waters. In that episode Waters saved Homer from ravaging reindeer by unleashing a garish and loud wind-up toy replica of their cruel taskmaster Santa.

In “Portrait of a Lackey on Fire,” garish and loud disposable fashion threaten to make Black Friday a daily reality. While we know the punchline to Lisa’s transformation at Michael’s hands from the moment she denigrates fashion as trivial, the plot twist she instigates is harrowingly unexpected. Smithers has a type, and it resembles Mr. Burns, right down to how his “exquisite” sounds like the nuclear plant mogul’s “excellent,” the kind of tyrannical powerhouse who could hate art so much he only buys paintings to keep them out of museums.

Evil comes in all colors, even plaid, and Michael can give Mr. Burns a run for his money when it comes to vile deeds. Oh, except Michael has much more money than Monty Burns, and his toss-away fashion sweatpants shops are way more environmentally destructive than the Springfield Nuclear Power Plant. And it does it for no reason. Burns is amazed, impressed and giddily humbled by how even his Chernobyl-in-waiting mutant factory produces something people need, power. But Michael has achieved the dream. He’s color coating the ozone for useless objects no one needs. It is brilliant.

Smithers faces real pain, loss and confusion. He is truly at a crossroads in how he sees himself. He really is not the kind of person who can accept the love he deserves at the cost of damage inflicted on others. Burns sees it as a no-brainer, and advises his minion to marry that man, immediately, “who cares if you have to pretend to be gay?,” which is also subversive comic mastery. It encapsulates every bit of history Smithers and Burns have ever had, and still leaves enough ambiguity for future comic, and interpersonal, possibilities.

The episode was directed by Steven Dean Moore, with a script from father-son writers Rob and Johnny Lazebnik. Each of the side characters on The Simpsons have been highlighted in episodes. In many cases, it gives them a chance to grow, like Principal Skinner’s relationship with Superintendent Chalmers, or like Moe, whose character develops consistently, like mold.

Highlighted episodes keep Mr. Burns young, Grampa Simpson old, and Gil Gunderson employed. Smithers’ portrayal has been an evolution, slowly unthreading from the fabric of executive material. “Portrait of a Lackey on Fire” is clever, empathic and bittersweet. It panders, but in unexpected ways which keep the humor coming regularly, but never uniformly. The episode works more as a character study than a joke-fest, but the character is ultimately Springfield, not Smithers, and Springfield is no Milwaukee.

Why Pierce Brosnan Will Always Be Gaming’s Greatest James Bond
DC Movies and TV Shows: Full DCU Schedule
Dead Space Remake Release Time: When Will the Game be Playable?
Dead Space Remake: How to Unlock Every Suit
Even More DC Shows Have Been Axed at HBO Max