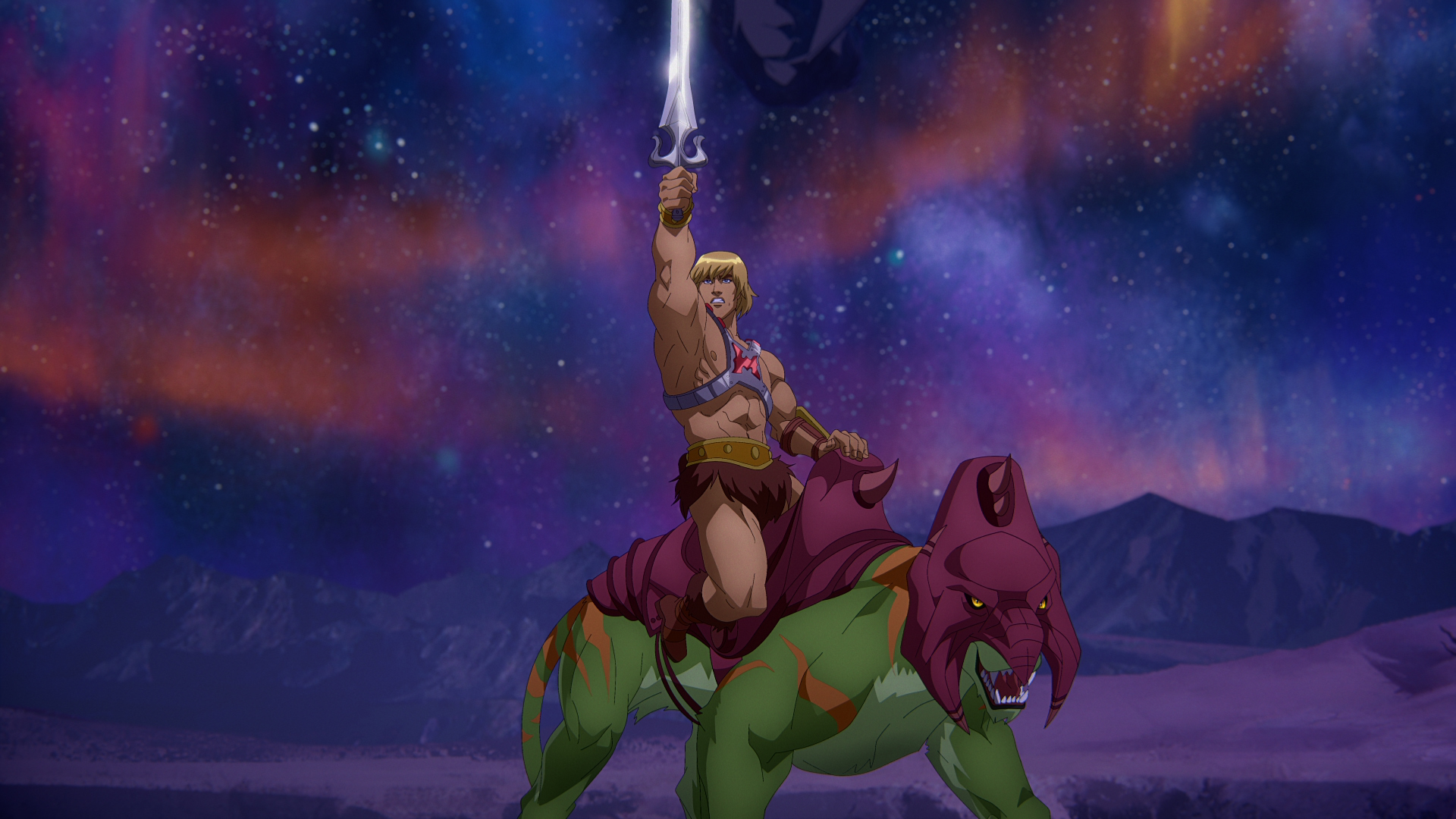 Warning: This Masters of the Universe: Revelation article contains spoilers for parts 1 and 2.

Masters of the Universe: Revelation is a true love letter to He-Man fans. Crafted in part by filmmaker Kevin Smith, a longtime fan of all things geeky, the first part of the Netflix series was filled to the brim with references, deep cuts, and a reverent treatment of its source material, the original 1980s He-Man and the Masters of the Universe animated series. It 100% succeeded in what it set out to do but it wasn’t afraid to take risks.

The biggest of which was, in its very first episode, killing He-Man and Skeletor, the two pillars of the franchise.  Following that up Skeletor and He-Man were brought back to life in episode 5… only for He-Man to seemingly be killed a second time! Kevin Smith tells us that everyone behind the scenes was incredibly proud of this decision.

“In the writers room, in the storyboards, when we recorded the actors the first time, I was like, it’s gonna rock so hard,” Smith says. “When we end the season with this giant cliffhanger and we kill He-Man a second time (the fans) are gonna love us to death.”

It was an immensely shocking twist to end on which certainly got people talking, although a small but vocal group of fans tried to make it out to be some kind of betrayal of the original series that permanently sidelined its most popular characters in favor of Teela.

Smith, baffled at this response, told us:

What was even more frustrating to Smith was that he knew that the team behind the series had done everything the fans were asking for… it was just going to be in the second batch of episodes.

In Masters: of the Universe: Revelation Part 2. Adam returns from the dead and we see firsthand the ramifications of him attempting to call on the power of Grayskull without first channeling it through the sword. Without the sword to temper the power, Adam is turned into an almost mindless beast. But it’s the love of his father, King Randor, who’s forgiven Adam for withholding the He-Man secret from him, that’s able to bring Adam to his senses. Adam is able to win back the Sword of Power and transform into He-Man once again.

Skeletor regains the power of Grayskull (this time given to him by He-Man in an attempt to enlist Skeletor to help in the final battle against Evil-Lyn) as well but is so blinded by his hatred for He-Man he can’t think of doing anything else but destroying his old foe. It’s a smart move that allows Skeletor to resume being the over-the-top baddie that’s turned him into a meme while still making him a legitimate threat. This is a man who will go to any lengths to kill He-Man, no matter what else might be offered to him otherwise.

Of course He-Man and Skeletor clash and as the two battle it out, the animation itself lovingly focuses on He-Man’s strength and ability as a fighter. Skeletor can see the world crumbling around him and he doesn’t run away. He knows this could be his last chance at killing He-Man and he refuses to let it pass him by. These are two titans fighting for everything they believe in.

Seemingly a sizable chunk of the animation budget was allotted to one sequence in order to demonstrate what He-Man has always been, the most powerful person in the universe, showcasing He-Man kicking as much ass as possible, taking out hundreds of foes with a smirk on his face.

All of this shows that taking He-Man and Skeletor out of the first part of the series was a savvy dramatic move by Smith and Mattel. Their absence in part 1 is what makes their reappearance in part 2 so exciting and impactful.

Smith confirms that this was the point and that removing He-Man and Skeletor was in part a way to examine why those two characters are so important.

“The idea going in was do World Without a Superman,” Smith says, referencing a beloved arc of Superman stories where the Man of Steel was killed off and readers got to see how the world reacted to his absence.

Doing this in turn created a vacuum in the world of Masters of the Universe that, as Smith explains, “demanded the return of those two characters.”

The show even goes out of its way to glorify He-Man and his importance to the narrative. In the episode “Reason and Blood,” Man-At-Arms lays out why he and everyone else followed Adam.

“He had all the power of the universe at his fingertips but he only chose to call it down when someone else needed it. He gave it away! That’s what made him a hero.”

Thankfully all this focus on He-Man and Skeletor is not some last-minute pivot by Kevin Smith and everyone else working on the show to placate negative online chatter. Though some may try to claim otherwise, animation has such a long lead-time that these episodes were put into production well before anyone had even seen a trailer for Masters of the Universe: Revelation. The show’s POV character is still Teela and her arc is the main focus. It’s a brilliant and masterful journey, which equally serves as a perfect mirror to Evil-Lyn’s arc; giving Lyn some much needed character development and back-story.

The show even has He-Man and Skeletor vocalize that the show isn’t completely about them directly. As the two clash Skeletor says,

“Don’t you see. It has to end this way. He-Man and Skeletor. Locked in eternal battle.”

He-Man gets the upper hand and grits out, “It’s not… about… US!”

Looking back on the complaints, the only thing Smith regrets is that they should have released all ten episodes at once instead of releasing them in two chunks of five. That way fans would have been able to get a better picture of what he was trying to accomplish with the series.

“It would have saved a little bit of grief,” Smith says. “I’m not saying everyone would have loved it but I’m saying there would have been no room to attack it because all your questions would have been answered. Whether you like the answers or not would have been a different matter altogether. But you live and you learn and if we ever do it again, trust me, everything will come out in one season. There won’t be a split.”