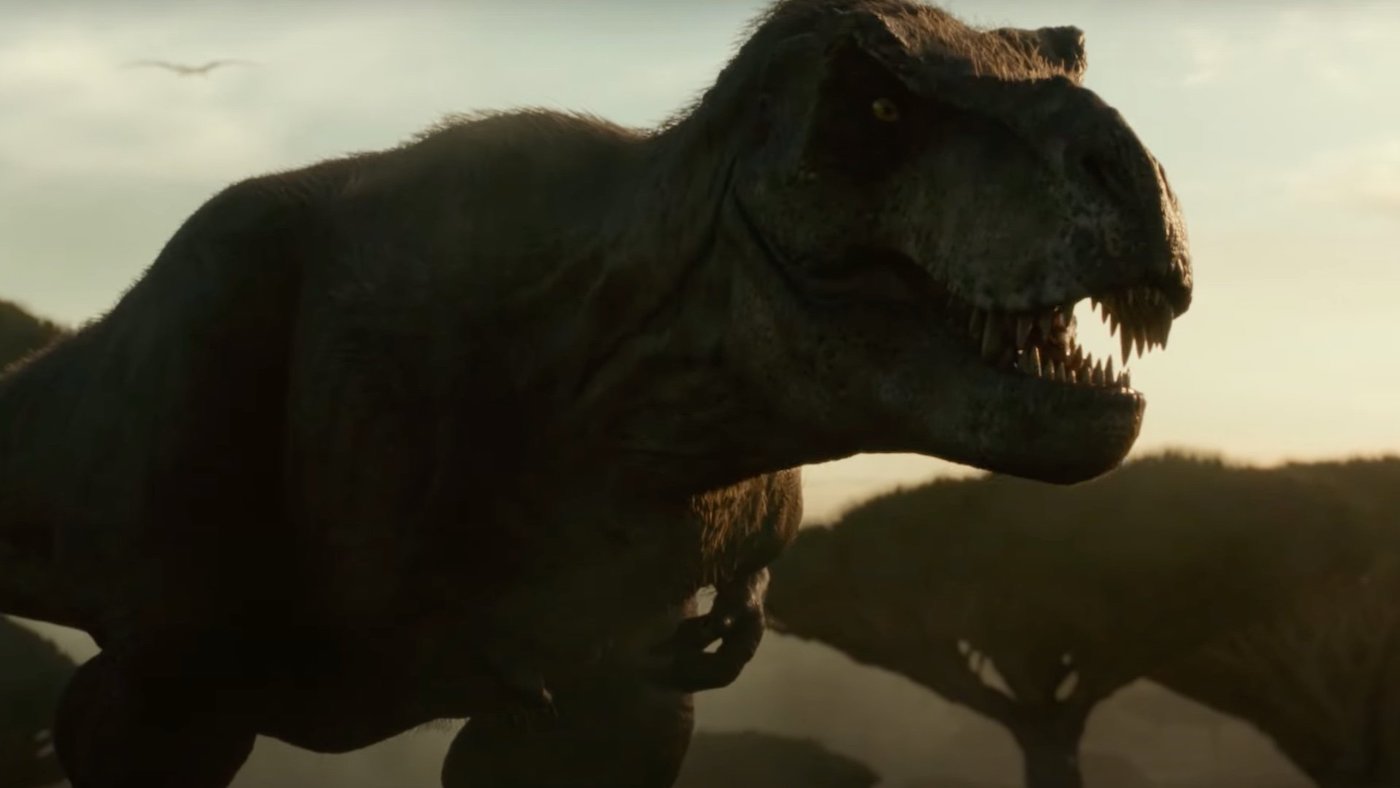 That isn’t our Tyrannosaurus Rex… is it? It’s a question many moviegoers asked themselves when the Jurassic World: Dominion prologue played in theaters over the summer before screenings of F9, and it’s a query that became more prominent today with the same prologue finally being released online. In an opening sequence which takes place at the dawn of time—and sunset of the dinosaurs—we see a version of the iconic Jurassic Park T. Rex stomping around the Cretaceous, but she looks a might strange after the last five movies. Like feathers and chicken feet strange.

This is just one of the many impressive CG visuals in the sixth Jurassic Park movie and third installment of the Jurassic World trilogy. Beginning well before the events of the original film—and virtually all other motion pictures too—Jurassic World: Dominion’s prologue offers a vignette about life in the fast lane for an aging T. Rex who is forced to do battle with the Gigantosaurus, a massive carnivore who gives even our dear Tyrannosaur a run for its money. Among other dinosaurs spotted are the small-beaked Lystrosauruses running around and a variety of flying pterosaur, plus many more.

Yet for those who are longtime fans of Universal’s Jurassic adventures, they all look wildly different from what we’re used to. The pterosaurs appear closer to birds than flying lizards; the Lystrosaurus has a bouquet of splendid feathers; and even the T. Rex looks something akin to a giant chicken when her silhouette is caught in the sun. That’s because Jurassic World: Dominion is more forcefully owning up to one of its franchise’s dirty little secrets: the dinosaurs we see on-screen in the movies are not how dinosaurs looked 65 million years ago or longer.

Director Colin Trevorrow has been more upfront about exploring that truth, even having his reimagined mad scientist villain, Dr. Henry Wu (BD Wong), articulate this in the first Jurassic World movie in 2015.

“Nothing in Jurassic World is natural,” Wu exclaimed at the time. “We’ve always filled gaps in the genome with the DNA of other animals. If their genetic code was pure, many of them would look quite different. But you didn’t ask for reality, you asked for more teeth”

In the context of that movie, it was easy to forget about this line since Wu was trying to justify making a Frankenstein’s dinosaur via the Indomnius Rex. However, Trevorrow clearly wants to further explore this in Jurassic World: Dominion. And indeed, it was always the intent of author Michael Crichton to reveal in the original text that the idea of recreating dinosaurs exactly as they were 65 million years ago is a dangerous and impossible pipe dream.

In the original 1990 novel, the much more rational Henry Wu character, as well as Ian Malcolm, argue amongst themselves and in their own minds as to whether the dinosaurs in he park are, technically speaking, dinosaurs. Like the 1993 movie, the novel’s InGen relied on bullfrogs and other modern creatures to fill in holes in the genetic code left by DNA strands which survived throughout the eons frozen inside amber. But because of that, it’s impossible to truly know what the dinosaurs looked like, and Wu even concedes to himself they are more like new genetically engineered species than actual dinosaurs.

But director Steven Spielberg completely omitted this detail in the iconic 1993 popcorn blockbuster. Instead the summer movie maestro preferred to bask in the majesty that comes from the idea that animals lost more than 65 million years ago could actually be walking the face of the earth again, exactly as they were.

The new Jurassic World: Dominion prologue shatters that illusion by showing the series’ most iconic dinosaur, the original movie’s Tyrannosaurus Rex, to have been a far different creature in her original lifetime before she was cloned into the familiar “terrible lizard” that’s always captured the imagination.

Granted, this is also a chance for filmmakers like Trevorrow and his legion of digital animators to acknowledge the great strides paleontologists have made in understanding the physiology of dinosaurs in the last 30 years, which has generally skewed increasingly toward more bird-like visions of the mighty beasts.

Be that as it may, it raises interesting questions for the summer 2022 event film about whether the franchise’s new main characters were right to unleash these dinosaurs into the world if, in fact, they aren’t even exactly the real dinosaurs who were made extinct by the unfortunate trajectory of an asteroid. It’s food for thought to go alongside your popcorn as all those drive-in moviegoers are terrorized by the T. Rex clone at the end of the prologue. Although, quite miraculously, somehow none of these extras seem to wind up as concessions for a dino who just wants dinner and a movie. See for yourself in the video below!

SHAZAM! FURY OF THE GODS – Official Trailer 2
Should Marvel Change MCU Strategy on Disney+?
Snowpiercer, Infinity Train and Other Erased Streaming Series You Can No Longer Watch
HBO’s The Last of Us: The Changes to Bill’s Story and the “Parallel Universe” of TV
Is This Succession Character Harboring a Painful Secret?