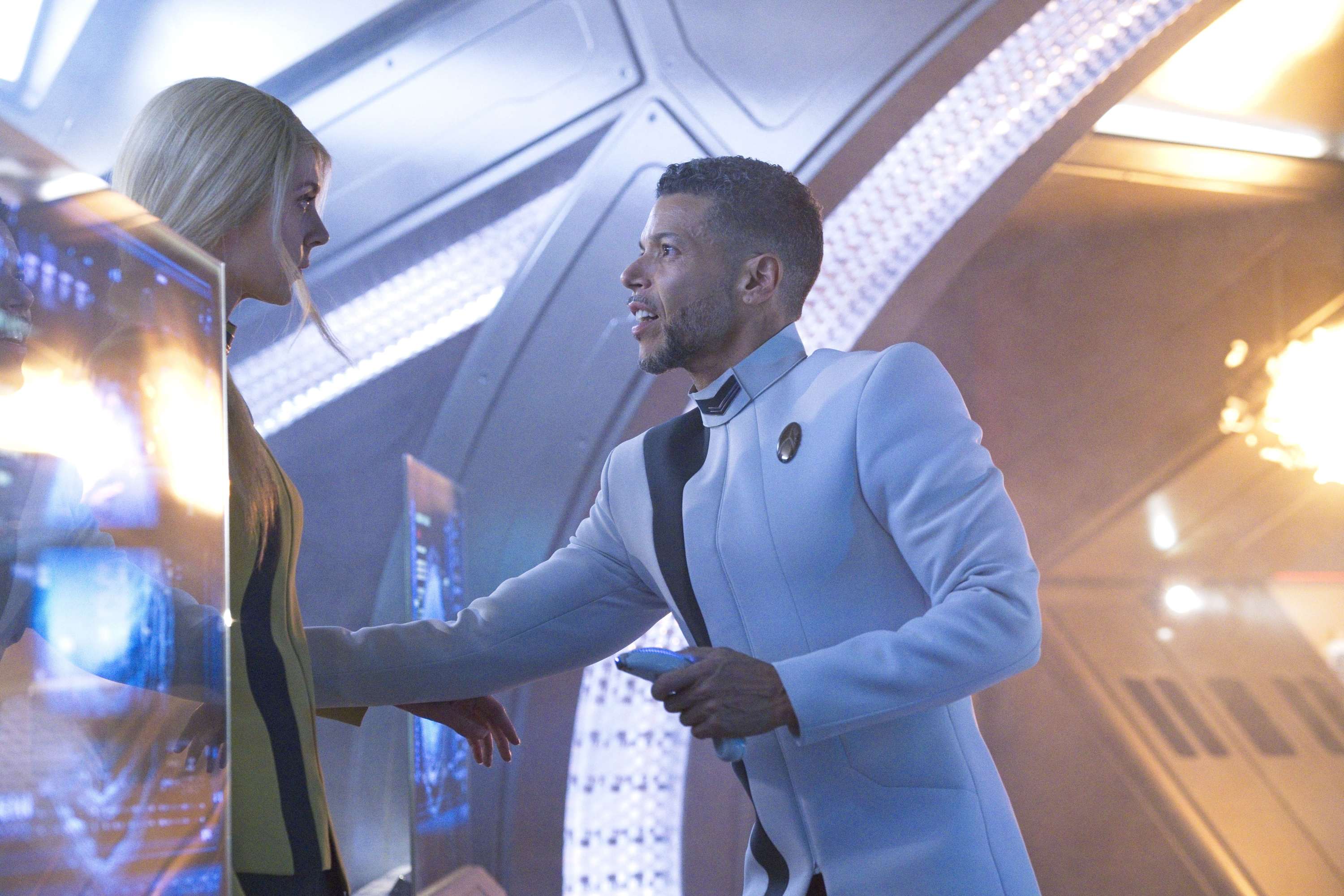 Just because Star Trek: Discovery now flies in the year 3189, centuries after any other Star Trek series or film, the writers still intentionally reference the vast canon of Trek. Part of this is because the DISCO writers are big Trek fans too, but it’s also about making sure everything connects. Recently, showrunner Michelle Paradise said Easter eggs and references are there to ground Discovery “within the larger Star Trek universe,” because they don’t “want to be on an island somewhere.”

So, in terms of nerdy callbacks, DISCO isn’t Lower Decks, but that doesn’t mean there aren’t some amazing deep-cuts that get slipped in each episode. In Discovery Episode 2, “Anomaly,” the crew tries to deepen their understanding of what’s going on with the phenomenon that destroyed Kwejian. The stakes are getting higher, but along the way, the Trekkie references continue to flow. Here’s all the Star Trek Easter eggs and references we caught in Discovery Season 4, Episode 2, “Anomaly”…

Although he’s later referred to as “Mister Saru,” Saru is still technically a Starfleet captain. He’s got four pips on his uniform and was offered the command of a ship called the Sojourner. But, because Sara becomes Michael Burnham’s new First Officer, his rank is simply set aside. There’s interestingly a precedent for this. After Kirk was demoted from Admiral to Captain in The Voyage Home, Spock still served as his First Officer, even though he also held the rank of Captain. This is why in The Final Frontier and The Undiscovered Country, Kirk and Spock are both Captains, in rank. Ditto Burnham and Saru in Discovery right now.

That said, it’s not clear who Burnham’s First Officer was prior to Saru’s return. Tilly? Maybe?

As Saru and Burnham talk about Georgiou, they look at the telescope. This telescope appeared in the first episode of Star Trek: Discovery Season 1, “The Vulcan Hello.” And, at that time, it wasn’t a metaphor. At that point, Burnham, Saru, and Georgiou used it to check out a lurking Klingon ship, which was undetectable with sensors. After Georgiou died, Burnham got the telescope as part of Georgiou’s will, but Burnham later gave it to Saru, who kept it on Discovery. The telescope now seems to be co-owned by both of them.

Also, to be clear, when Saru refers to Georgiou here, he’s only talking about Prime Georgiou, the late captain of the USS Shenzhou.

When Discovery jumps to the anomaly, Stamets says “Curiouser and Curiouser” This is a quote from Alice in Wonderland. In Discovery Season 1, it was established that Michael Burnham was read this book by her adoptive mother, Amanda Grayson. Spock also quotes from Alice in Wonderland, in “Light and Shadows,” in Discovery Season 2, Episode 7. We don’t know why Stamets likes Alice in Wonderland, but Spock’s mother reading him the works of Lewis Caroll was established in an episode of The Animated Series in 1973 called “Once Upon a Planet.” In 2019, Nicholas Meyer — director of The Wrath of Khan and consulting producer on DISCO Season 1 — mentioned that bringing Alice In Wonderland to Discovery might have been his idea. “I’m trying to remember if I brought up Alice in Wonderland that first year [of Star Trek: Discovery,” Meyer said in 2019. “It wouldn’t surprise me to learn that I did. And it wouldn’t astonish me—well maybe it would astonish me—to learn that I didn’t.”

Culber tells Adira and Gray that the new Synth body for Gray was created using the “Soong Method.” This references the finale of Picard Season 1 in which Picard’s mind was moved into a humanoid Synth body. This means that the Soong Culber refers to isn’t Data’s dad Noonien Soong, but rather, Data’s human “brother,” Altan Soong.

Gray says that he might want to “become a host again.” This is a quick line, but it’s actually kind of wild. This implies two things: First, that a Trill host could become joined with another symbiont after having been joined with a different one. Obviously, there’s never been a reason to think about this before: Usually, the reason a host no longer has a symbiont is that they’ve died and the symbiont has gone to someone else. So, now that Gray will be “reborn,” but not joined with Tal, he is right, he could become a host again.

But, on top of that, this also implies that the Synth Trill body might be biologically compatible with a Trill symbiont! This means that even if Synth bodies are no longer in fashion, that they are basically close enough to being organic bodies that, in theory, Gray could get another symbiont. It feels VERY unlikely that this will happen, but it’s a cool prospect.

Burnham has a holodeck now

Although limited hologram tech existed in the 23rd Century, this is probably the first time Burnham has been able to take advantage of the advanced holo-tech that existed in the 24th century and beyond. Burnham “adding a holo” to her ready room also mirrors Jean-Luc recreating his study on the holodeck of the La Sirena in Star Trek: Picard.

Cliffs of Surak and Luke Yuron

In her holographic recreation of Vulcan/Ni’var, Burnham mentions the Cliff of Surak and Lake Yuron. Surak is a reference to the most important Vulcan historical figure ever, the founder of logic and peace, first glimpsed in the TOS episode “The Savage Curtain,” and later in the Enterprise three-parter beginning with “The Forge,”

Lake Yuron on the other hand is a very deep cut. This lake was referenced by Tom Paris while talking to Tuvok in the Voyager episode “The Disease.”

Michael is referring to the Discovery’s ship’s computer as “Zora.” The computer voice is now played by actress Annabelle Wallis, who first voiced “Zora” in the 2018 Short Treks episode “Calypso,” written by Picard co-creator Michael Chabon. The timeline of “Calypso,” is, in theory, still at some point in the future of the current era of Star Trek: Discovery. In 2020, Discovery producer and director Olatunde Osunsanmi said those connections might not be “one-for-one.” Meanwhile, Michelle Paradise has gone on record saying, “‘Calypso’ has now become part of our canon…And yeah, eventually we’ll have to find our way there.”

“Throw me out an airlock”

Stamets jokes about Burnham throwing him out an airlock. This references the fact that Burnham actually did use the Vulcan Nerve Pinch on Stamets and kicked him out of the airlock in Discovery Season 3, Episode 12, “There Is a Tide…”

We very rarely see the artificial gravity of Star Trek spaceships get knocked out. The most prominent example was in the film Star Trek VI: The Undiscovered Country.

Culber is basically the ship’s counselor

Although he shares more conventional medical duties with Dr. Pollard, it appears that Culber has now become the de facto ship’s counselor. This is probably because prior to DISCO coming to the 32nd Century, the role of ship’s counselor on starships didn’t really exist in 2258. In a deleted scene from The Next Generation episode “Relics,” Scotty is surprised that the Enterprise-D has a ship’s counselor, and Troi affirms that it’s 100 percent something that happened after his time. So, if we connect the dots, this means that the Starfleet of 3189 obviously has ship’s counselors, and Culber is essentially getting a job that didn’t even exist for him back in the 23rd century.

Obviously, he’s totally qualified, and perhaps is poised to become the best Star Trek counselor of all time! (Sorry, Deanna.)

The Last of Us: How Long Does It Take to Beat the Games?
Actual footage of me on the search to find the Westworld ending we all deserve 🙃 #shorts #dust
Small Town | Marvel Studios’ WandaVision | Disney+
The Last of Us: Can Ellie Infect Others?
The Last of Us: Are the Infected Actually Zombies?