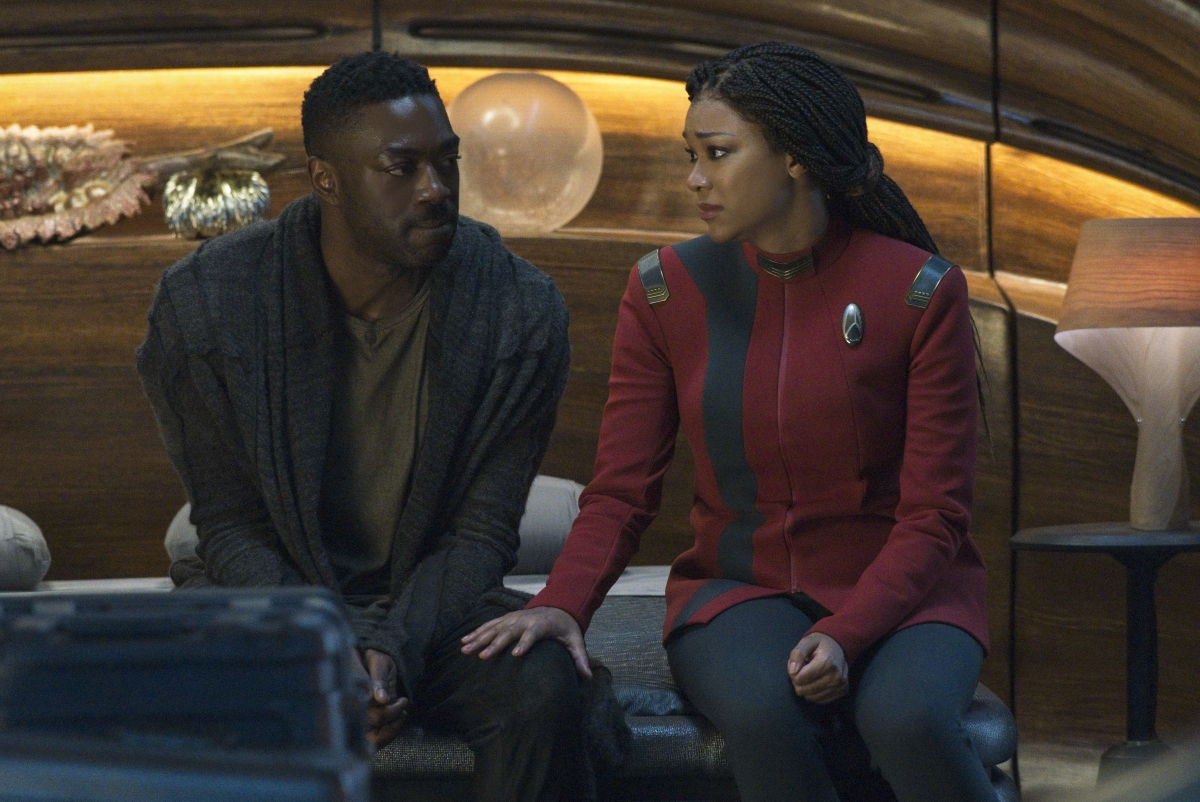 One of the major questions of Star Trek: Discovery Season 4 seems to be how Michael Burnham will balance the professional and personal sides of herself now that she has become a captain. As the person responsible for an entire ship and the lives of its crew, it naturally follows that she’s going to have to make harder, more difficult choices than she was before she earned her spot in that chair. Sometimes that will mean recognizing that she can’t thoughtlessly risk herself the way she used to, but in others, it means she’ll have to give those in her command the chance to risk themselves, even – and maybe most especially – when she doesn’t particularly want them to do so.

Given everything we know about Michael, we’ve already seen that isn’t something that comes terribly easy to her, and Discovery has spent years allowing her to essentially get away with not having to make those kinds of choices. (Or, alternatively, letting her make what is ostensibly a textbook wrong decision and ultimately be rewarded for it in the end.) In “Anomaly,” however, Burnham tries to do the right thing – as a captain, and as a partner – by Book, giving him the chance to help gather crucial data on the strange gravitational event that destroyed his homeworld.

Sonequa Martin-Green is wonderful throughout “Anomaly,” as Michael desperately tries to get Book to talk about his loss and internally wars with herself about whether to let him go on a mission she knows he is uniquely suited for when it is obvious that he is…let’s just call it emotionally compromised. It’s obvious at multiple points that her personal feelings are at war with her instincts as a leader and the fact that she and Book ultimately get through it by trusting each other, even when both of them are deeply reluctant about it, is so darn satisfying. (Reader, I love them.)

But, if we’re honest, this episode belongs to David Ajala. Book’s grief is both immediate and overwhelming – the show essentially confirms that, barring the discovery of offworlders elsewhere, he is now the last of his kind – and he reacts to it in…probably the way we all assumed he would. He’s angry, he’s desperate to do something, he’s devastated, that the new beginning he didn’t even know he needed was ripped away from him before he could tell the people who were part of it how much he cared about them. It’s our clearest look yet into who Book is and what makes him tick, and I look forward to more of that as the season continues.

Yet, it turns out that Ajala and Anthony Rapp have rather fabulous chemistry together and the fact that Stamets not only doesn’t like Book much but actually feels jealous of him in some ways provides a nice and necessary contrast to the kid-glove treatment he’s getting from everyone else.  Is it kind of a terrible cliche that the two discover a grudging respect for one another during their near-death trip through the anomaly’s outer edges? Yes, absolutely. Do I care? Not at all. Because the two bonding over feeling helpless – as well as Stamets’ quiet promise to solve the mystery of what happened to Kwejian as a thank you for Book saving his family from the dilithium planet last season, well. I am grown-up enough to admit that got me right in the heart. I don’t know that it makes sense for these two men to become friends, but this prickly new connection between them really works for me.

There’s actually a surprising amount of other stuff happening in “Anomaly,”, despite the fact that most of the episode is focused, rightly, on trying to figure out what the unexplained space event might be. Saru’s back and serving as Burnham’s new second in command. (“Mr. Saru” is a perfect title.) There’s something to be said for the fact that the show doesn’t drag out the question of his return, quietly reinstating him as the ship’s emotional and moral compass with little fanfare. It’s almost laughable how quickly Saru is called upon to be literally everyone’s therapist, but Doug Jones simply radiates the sort of quiet care and kindness that make it clear why everyone wants to tell him all their problems.

Culber is getting pretty close to completing the synthetic body for Gray (complete with a Picard name drop and with some details about the technology that Star Trek: Picard fans will certainly find interesting). Adira’s working overtime to impress Tilly with their algorithm skills in a crisis, although the freshly minted lieutenant seems to be having a small crisis of faith about the career path she’s believed in all her life. A classic overachiever, it makes a certain amount of sense that Tilly might find herself floundering now that she’s at least partially achieved a goal she likely meant to spend most of her life chasing, all while trying to process everything she experienced during the repair ship disaster.

Especially love to see her proactively seeking out mental health help from Hugh, as one of the true failings of last season is that Discovery didn’t spend nearly enough time really digging into the ways that their jump into the future – though necessary – was also incredibly traumatic. It’s hard to believe that Tilly was, or is, the only person that’s struggling in this way and it seems important to acknowledge that more broadly. (I mean, Saru can’t be everybody’s therapist, can he?)

Why Pierce Brosnan Will Always Be Gaming’s Greatest James Bond
Once Upon A Time Season 7 Episode 5 Review & AfterShow | AfterBuzz TV
The only way you’ll get me to run is if a Allosaurus is chasing me.🦖 #short #shorts #scifi
The Last of Us: Are the Infected Actually Zombies?
Arrow Season 6 Episode 16 Review & Reaction | AfterBuzz TV