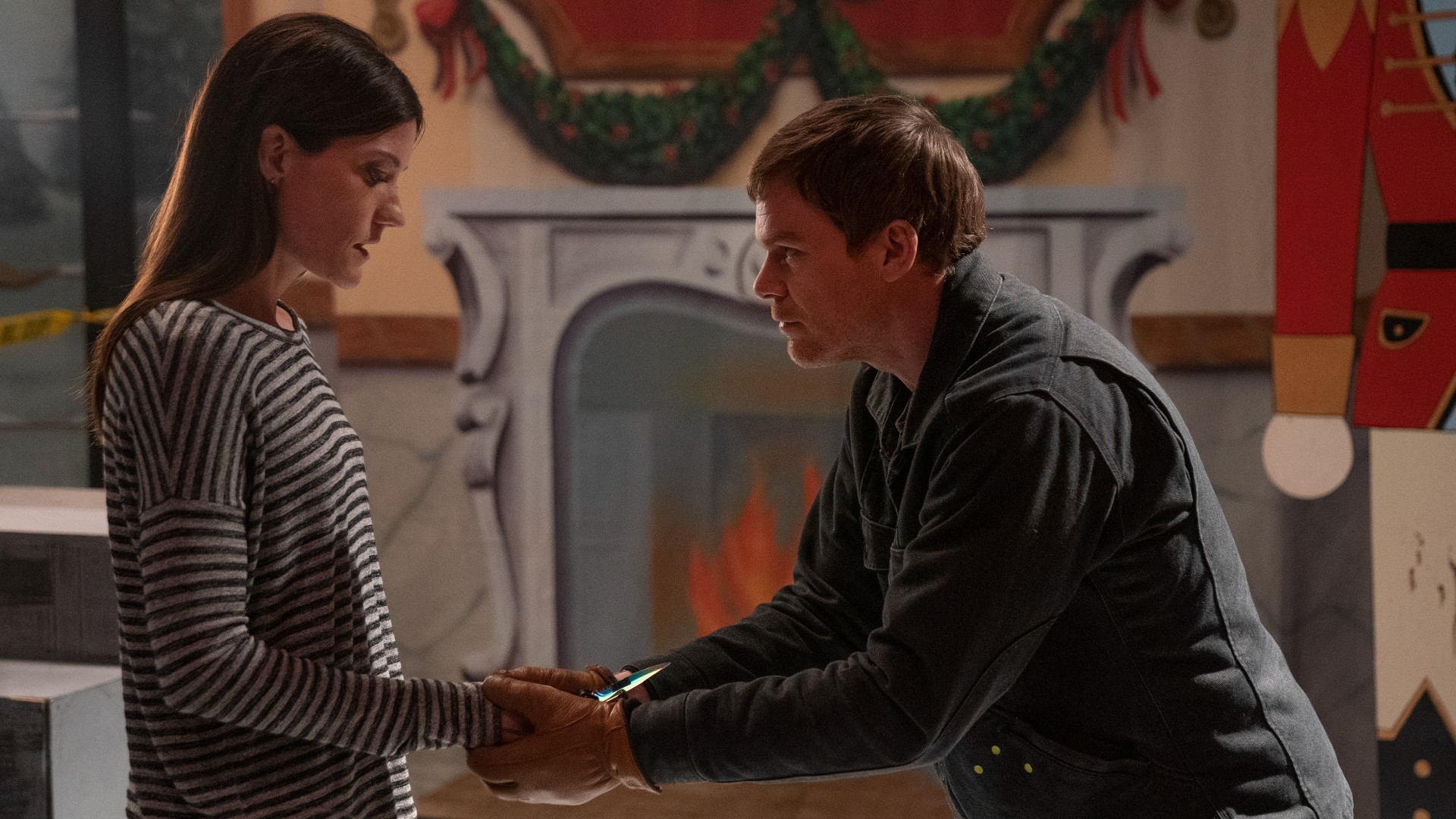 No one is ever who they say they are on Dexter. The quirky, socially awkward blood splatter guy? He’s a murderer. The Assistant District Attorney? He may be harboring murderous fantasies just waiting for an excuse to come out. The successful self-help guru? He’s fronting a human trafficking ring. We all hide parts of ourselves from the world, but in the world of Dexter, the sides that folks keep hidden are typically monstrous.

It looks more and more as if Harrison and Kurt are fostering monsters, or in Harrison’s case, a Dark Passenger. Both spend the episode hiding in plain sight, covering their tracks, trying their best to hide behind the public-facing facades that they have built, but cracks are starting to show. In Kurt’s case, he’s mysteriously misdirecting the police while trying to fish around Dexter for more clues on his son’s disappearance. Meanwhile Harrison appears to give in to the murderous urges that plague him and his father. It’s possible that one or both men are innocent of the evil they appear to be a part of here, but “H is for Hero” seems to suggest both men, like Dexter, are keeping killer secrets.

The theme of duality and the parallel stories between Harrison and Kurt makes this the best episode of Dexter: New Blood yet. The Harrison storyline in particular, which finds Dexter back in blood splatter-mode investigating his son like one of the potential victims of his past, is excellent, as is the continued use of Deb as more of a ghost foil than easily ignorable conscious. As I suggested last week, Harrison has appeared to take advantage of the impotent rage of his new friend Ethan and he uses it as a chance to test out his violent urges. Seeing him listen to a podcast about his mother’s killer suggests that Harrison remembers more about his past than he’s leading on and we saw over the course of eight seasons how easily Dexter can suss out a liar.

The most interesting thing about Harrison pretending to be a hero that prevented some school massacre is that Harrison is living out a sort of glorious vigilante fantasy that Dexter always held himself. By episode’s end, it even appears that Dexter is happy to confirm that his son has the same sickness inside, though it may be more inspired by Arthur Mitchell than the family brand. It will be interesting to see how Dexter approaches his son and whether he’ll try to live vicariously through Harrison. Harrison’s performance and ability to sully his victim’s reputation has kept him clean this time, but what will happen the next time he decides to act out?

Meanwhile, Kurt sticks with his story that Matt is alive, having said that his son FaceTimed him from what looked like an NYC hotel, appearing rundown and tired. Many online theories have speculated that Harrison used a similar deep fake technology that he utilized on Zach to trick Kurt into believing that Matt is alive, but the dodginess of Kurt’s answers makes it look like Kurt is inventing all of this wholesale. If Kurt is responsible for all the missing girls in Iron Lake, and based on his interactions this week with Chloe, the green-haired drifter at his truck stop, he is, then it’s clear he’d rather search for his son’s killer himself than have the police digging around. If the police continue searching, they may find evidence of his own wrongdoing, like in that mine shaft where Dexter encountered the bear, perhaps?

Anyway, Kurt shows up at Dexter’s cabin with a present for Harrison, but it’s obvious that he’s fishing for information, and Dexter walks right into his trap. Dexter brings up Matt’s past with the boat accident, and it’s a slip that visibly gets the wheels turning in Kurt’s head. This series always mined its best material when Dexter was caught in a game of cat and mouse with another killer, so this is a welcome development.

This is a lean, but highly effective episode, with a clear theme, interesting developments, and old rhythms presented in new ways. A confrontation between Dexter and Harrison feels imminent, but I’m also intrigued by how characters like Molly and Edward Olsen will fit in the grand scheme of things. If every episode is as tight and focused as this, then there may be life in Dexter: New Blood yet.

HBO’s The Last of Us: The Changes to Bill’s Story and the “Parallel Universe” of TV
Sci-Fi Short Film “The Kid” | DUST | Throwback Thursday
Batman: The Doom That Came to Gotham | Trailer | DC
Should Marvel Change MCU Strategy on Disney+?
Happy Valley Series 3 Episode 5 Review: James Norton Kills It As Tommy Lee Royce