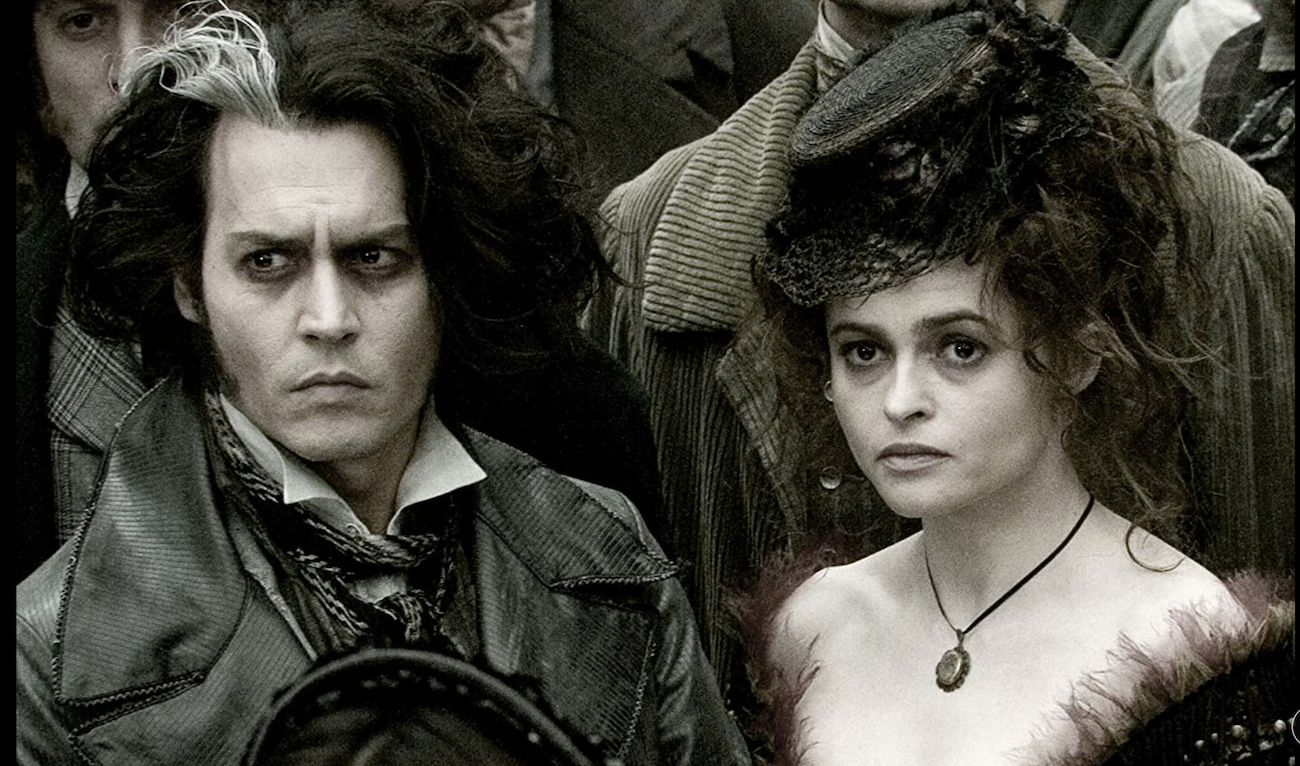 It can be said Stephen Sondheim was a man who rarely kept his opinions to himself. Nor should he have. As one of the greatest composers, lyricists, and purely creative forces in the history of American theater, Sondheim was a talent whose output in a handful of years could outstrip entire careers. Before he turned 30, he wrote the lyrics for West Side Story and Gypsy; by the time he was 50, he’d imagined whole cloth the 3/4 time swoons of A Little Night Music and the melodic hellfires burning beneath Sweeney Todd: The Demon Barber of Fleet Street.

Yet when it comes to Sweeney Todd, it might surprise many of his fans that he was never happier with a movie adaptation of a stage musical than while watching Tim Burton’s big and bloody reimagining of his music—and with Johnny Depp and Helena Bonham Carter’s limited vocal ranges, no less.

Often a sharp critic of how Hollywood previously transferred Broadway toe-tappers to cinema, Sondheim was always a thinker who could keep his own counsel, even about films as beloved as Robert Wise’s 1961 screen version of West Side Story. Which is why Sondheim’s musings about Sweeney Todd, and musical cinema in general, are still so fascinating. For here was a composer who celebrated the creative departures and artistic choices that drove his most ardent admirers into a frenzy.

“My reaction to the film is that unlike all musical movies, in fact I’d say all the movies made from stage musicals that I’ve seen, this is really a movie based on a musical,” Sondheim said in a 2007 interview. “This is not simply, as all the others are, a film of the stage musical.”

The distinction Sondheim was alluding to is subtle, but it is striking. When Sweeney Todd was released in 2007, the movie musical was just beginning to yawn back to life following the successes of Moulin Rouge! (2001) and Chicago (2002). Indeed, the latter was a massive hit that won six Oscars, including Best Picture. And yet, that critical and awards darling was still often beholden to filming its scenes on the same smoke-filled jazz club stages that were implicitly created by the sets and vision of Bob Fosse nearly 30 years earlier in the original Broadway production of Chicago.

Burton’s Sweeney Todd, by contrast, looked almost nothing like the stage show which was created around the same music. In fact, it didn’t sound too much alike either, with even Sondheim’s grandest melody, the frequently reprised “Ballad of Sweeney Todd” that begins the show and then haunts the subsequent three hours like a ghostly Greek chorus, being almost totally excised from the film beyond key moments in the orchestral score. For Sondheim, this was the appeal. He even compared it favorably to one of the greatest movie musicals of all-time, Fosse’s own adaptation of Cabaret (1972), for which the theater and film director famously won the Best Director Oscar, beating out Francis Ford Coppola for The Godfather.

Sondheim continued, “That’s not the case [with Sweeney Todd]. Numbers have been reshaped, changed, cuts have been made, little sections have been rewritten to make it a movie, and not merely a film of the stage musical. That’s the essential difference, I think, between this movie musical and others based on stage musicals.”

It’s an interesting insight to revisit now, nearly 15 years later and after Sondheim’s great light has gone out. While relatively well received when it was released, grossing more than $150 million worldwide and earning three Oscar nominations, including a Best Actor nod for Depp, the Sweeney Todd movie has largely faded away in the cultural memory, even amongst fans of movie musicals. But then that might be due to all the things Sondheim appeared to love about Burton and screenwriter John Logan’s adaptation.

Burton was of course an unabashed fan of the original production of Sweeney Todd well before he was a film director. In London, circa 1980, he even managed to see the Harold Prince-directed West End transfer of the musical before it quickly closed due to a lack of initial interest from UK audiences. However, Burton was never a great lover of musical theater itself. Rather he was attracted to the horrific elements which Sondheim brought to the stage every time Sweeney unfurled his straight-edged razor.

Those creative differences are reflected in Burton’s finished film, which obviously admires its source material, but brazenly differs from it. On the stage, Sweeney Todd is an epic nightmare drenched in regret, longing, but also a highly macabre and frankly bawdy sense of humor. Sweeney Todd might be a barber haunted by the need for revenge, but his landlady and possible lover, Mrs. Lovett, is grimly practical to the point of hilarity. As originally created for the stage by Angela Lansbury, she’s a character who steals the show, and her “A Little Priest” duet with Todd, during which the pair discuss the various flavors Sweeney’s loner customers might make, is the stuff of high camp.

But in Burton’s movie, even the gallows humor of “A Little Priest” is cut short–the song is literally shortened. The energy between Sweeney and Lovett is also different; theirs is more of a quiet, unrequited affair, and like everything else in the picture, there is the unmistakable air of tragedy hanging above them. This re-centers Sweeney’s melancholy as the story’s beating, bleeding heart.

When director Hal Prince brought Sondheim’s Sweeney Todd to the stage, he was fascinated by the grim industrialized history of Victorian London, seeming to take to heart Sondheim’s amusing lyric about Sweeney flipping the classist order of a capitalistic society on its head: “The history of the world, my love–is those below serving those up above. How gratifying for once to know that those above will serve those down below!”

Hence the first thing we hear in the original production–and every time Sweeney’s razor drips “precious rubies” from its bloodcaked edge–is a factory whistle signaling the plight of the working poor. But the historical context was never Sondheim’s favorite element. Similarly, it’s almost wholly absent from the Sweeney Todd movie, in which the characters’ interior gloominess is reflected in the nigh black and white color scheme running throughout the pallid film. Burton said during the production that he wanted it to look like “horror movie London” as opposed to any specific 19th century period setting. And, indeed, it is quite easy to imagine his same sets being used by Boris Karloff or Peter Lorre in a Universal horror movie in the 1930s, or a Val Lewton picture in the ‘40s.

That aesthetic choice heightens the characters’ anxieties, and in so doing spotlights the tragedy until that is the only emphasis left–at least until it’s time for throats to be slit and pies to be baked in the most ghoulishly over-the-top use of gore ever conceived for a Broadway adaptation.

For some musical fans, the Sweeney Todd movie’s pivot from a sprawling ensemble toward an intimate character study that ends on the bleakest of notes was a bit underwhelming. And they certainly felt that way on nascent social media while discussing the casting of non-professional singers like Depp and Carter in roles which have been performed in opera houses.

Nevertheless, the impulse of dragging the material to a darker (and arguably baser) place likely also appealed to Sondheim. It’s worth remembering that Sondheim was the rare type of talent who would seek high art from unlikely sources that others might’ve sniffed at. That holds true to even the origins of Sweeney Todd: The Demon Barber of Fleet Street, which is based on another little-seen play by Christopher Bond. Sondheim sought that play out in 1973 London because he heard it was in the style of French theater’s Grand Guignol.

While the play he saw didn’t wind up qualifying as Grand Guignol, there was something pleasantly sinister about a melodrama being performed in a borough far from Central London or West End, and at a theater where patrons wandered in and out while holding pints of beer.

“[It was] a working man’s theater,” Sondheim recalled. “It’s like a pub-theater, a pub and theater combined… and it had between its scenes, songs that audiences would enjoy singing, so it was very jolly. But the play was kind of creepy and charming. It was Sweeney Todd, and that evening I thought, ‘Gee that would make a good musical.’”

It takes an obvious amount of vision to see what would become one of the most celebrated and emotionally complex musicals ever staged in such humble origins. Perhaps it takes just as much vision, or confidence, to see that same material, your material, transformed again into the type of horror movie that can make musical patrons shudder. Sondheim smiled at such drastic changes though. In the age of recently gaudy (and truly underwhelming) Broadway adaptations like Cats and Dear Evan Hansen, such openness to change is another Sondheim virtue worth remembering.