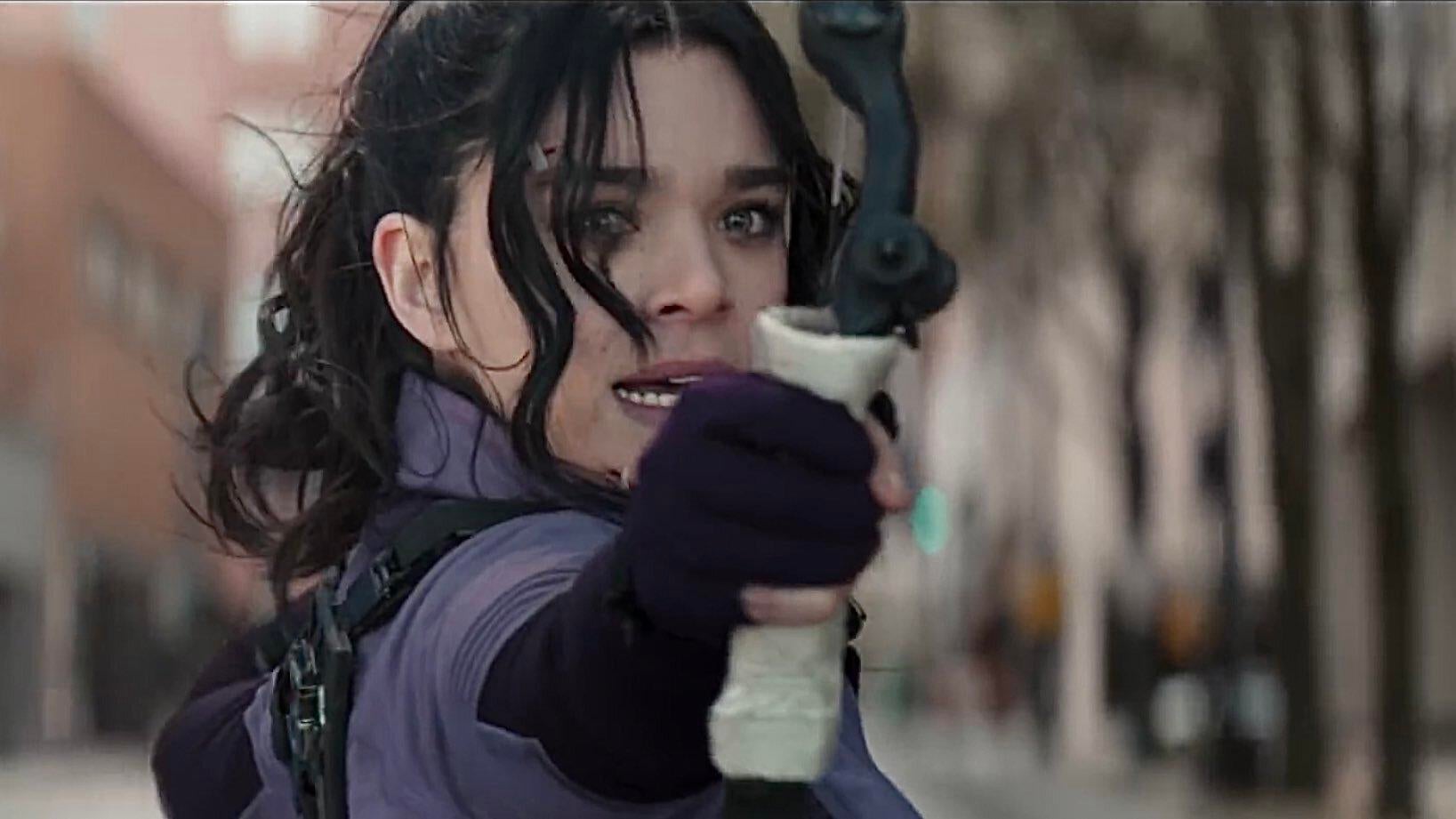 This article contains spoilers for Marvel’s HAWKEYE episode 3, as well as potential spoilers and speculation for future episodes and the wider MCU.

In Marvel’s Hawkeye episode three, “Echoes”, we get to know Maya Lopez aka Echo and her right hand man Kazi, who are currently heading up New York’s Tracksuit Mafia for a mysterious crime boss, while the friendship and trust between Kate Bishop and Clint Barton grows. It’s a near-flawless episode of MCU TV that pits Clint’s deep psychological issues and murky past against Kate’s headstrong enthusiasm and kindness, and introduces the character of Echo in a way that slices your sympathies apart with a jagged edge.

“Echoes” begins by taking us back to 2007. We meet a young Maya at school struggling to keep track of what her teacher is telling the class. Far from giving up, Maya excels by forging ahead using both her natural and learned skills. At home, her loving father William (Zahn McClarnon) plays games with her and talks to her about dragons, immediately getting our Shang-Chi senses tingling.

Echo questions why she isn’t going to a specialist school for the deaf, and William apologizes but says it will be better for her in the long run, and that she will have to learn to jump between two worlds. There are several levels to this conversation, but by the end of the episode it becomes clear that those two worlds are existential, literal, and rooted in Marvel’s inclusive but relentless IP: the world of Netflix’s Daredevil and the world of the MCU are slowly coming together in Hawkeye via Echo.

As Echo continues her martial arts training, her father notes that her “uncle” will take her home after class. We’re then treated to what we can only assume is a straight-up Kingpin tease, but we never see the face of Echo’s “uncle”, just his hand lovingly squeezing her cheek before she is revealed to also have a prosthetic leg. This little girl is a gifted fighter, and will only grow stronger and more proficient, as we find out when we meet her again in the present day.

Echo is badass, rides a motorbike and is haunted by her father’s death. William, it appears, was murdered by Clint on a full Ronin rampage during The Blip when he took issue with the Tracksuit Mafia’s dodgy wheelings and dealings. The mystery of why Echo was after Kate and Clint is solved: she wants to know who Ronin really is, and to get her revenge.

The chessboard is now emotionally complex for both Hawkeye’s characters and its audience. Clint is technically one of our “good guys” but he has committed terrible, violent acts. He has killed mercilessly over a five year period, and just because he considered those he murdered “criminals” doesn’t make it okay by a long shot.

Even as we sympathize with Echo’s heartbreak, we don’t think Clint deserves to die. We’ve spent too much time with him, and seen him lose too much. But we still know deep down that he should be punished; that he should be forced to confront the consequences of his actions, and that maybe Maya Lopez should be the face of that reckoning.

Clint chooses not to reveal to anyone that he was under the deadly Ronin hood during this episode, but Kate is getting close enough to suspect the truth. As she tries to get to the bottom of Armand III’s murder, she probes Clint in an off-handed way that triggers overwhelming guilt over his Ronin phase.

Kate’s right that Hawkeye is a hero, but Ronin was a villain, and eventually her fangirling is going to push Clint over the edge. He needs to get there sooner rather than later, because he’s falling apart both physically and mentally, and as his hearing deteriorates, the highly-skilled and deaf Echo is pushing buttons he didn’t even know he had. When he finds out her story, Clint will have to listen to it with his whole heart.

Although it seems like this series only started yesterday, we’re now halfway through it. This episode mostly ignores the show’s ongoing mysteries – the Avengers Compound watch is briefly mentioned; Kate doesn’t really get any further in her investigation of Jack – in favor of broadening the story and digging into its characters.

As it does so, it sprinkles some perfectly-timed banter around heart-wrenching scenes and an impressive car chase. Of course it was great to see that Pym arrow manifest and the return of the USB arrow that only recently saved the multiverse in What If…?, but it’s Clint’s struggle to connect with little Nate over the phone, aided by Kate, that will stay with me.

“Echoes” just worked, effortlessly; if its energy hadn’t dwindled slightly in its last five minutes, it would be damn near perfect. As we head towards the unveiling of Ronin, Wilson Fisk in the MCU, and Kate’s inevitable realization that you should never meet your heroes, Hawkeye has tightened its grip on me. None of this is going to be pretty.

The Traitors: The Contestants Who’ve Been on EastEnders, Blankety Blank & More
Pokémon Scarlet and Violet: How to Beat the Charizard Tera Raid
Pokémon Scarlet and Violet: When Does the Charizard Tera Raid Start?
World of Warcraft Dragonflight: How Long Does It Take to Reach Level 70?
Super Mario Bros. Movie Trailer: The Biggest Nintendo Easter Eggs and Callbacks