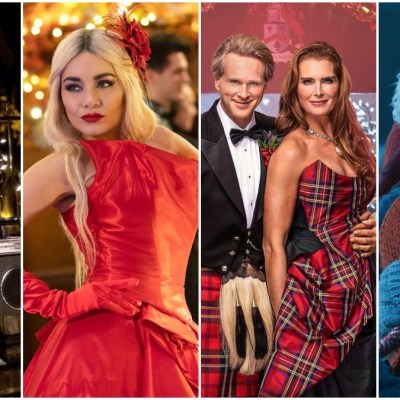 If your household isn’t wall-to-wall Elf for the entirety of this month, then a) that must be nice and quiet. Can I come and stay? and b) you must be on the look-out for some alternative film options. Find them below in our handy guide to what’s premiering daily on Sky Cinema in the UK in December. Yes, there’s Christmas fare, including something about an animated cow, Mel Gibson playing a gun-toting Santa Claus, and two Sky Original festive films Last Train to Christmas and A Christmas Number One, but there’s much more besides.

Our highlights include monster mash-up Godzilla vs. Kong, Lin-Manuel Miranda musical In the Heights, excellent Thomas Vinterberg drinking drama Another Round (Mads Mikkelsen’s closing scene is worth the price of admission alone), and The Suicide Squad, which needs no introduction round these parts. There’s also the Peter Rabbit sequel for anybody with young kids/a burning passion for James Corden. Read on!

Nowhere Special – 1st December
James Norton plays the terminally ill father of a young boy and spends his last months searching for the right family to care for his son.

Sound of Violence – 2nd December
A Finnish-American slasher horror about a formerly deaf girl who goes on a killing spree.

Vanquish – 5th December
Starring Morgan Freeman, Ruby Rose and Patrick Muldoon, action thriller about a former Russian drug courier whose past catches up with her.

The Last Bus – 8th December
Timothy Spall plays a widower who travels the length of the UK on local buses to scatter his wife’s ashes.

A Christmas Number One – 10th December
Sky Original starring Freida Pinto and Iwan Rheon about a musician whose seriously ill niece wishes for him to get a Christmas number one.

The Unholy – 11th December
Horror starring The Walking Dead’s Jeffrey Dean Morgan about what seem to be religious miracles.

The Stand In – 16th December
Drew Barrymore comedy-drama about a movie star who uses her on-screen stand-in to do the bits of her life she doesn’t want to.

Last Train to Christmas – 18th December
Original Sky comedy starring Michael Sheen as an 80s local celeb travelling home for Christmas on a train that takes him through his past.

C.I.Ape – 20th December
The CIA. A chimpanzee agent. What more could you ask for?

The Obscure Life of the Grand Old Duke of Corsica – 21st December
Timothy Spall-starring comedy drama about an architect working for a wealthy eccentric.

Think Like a Dog – 23rd December
A boy creates a telepathic connection with his dog and together, they fix his family’s problems.

Plan A – 28th December
Thriller about a group of Holocaust survivors plotting revenge.

The Colony – 30th December
Sci-fi thriller about the search to return to an Earth made uninhabitable by disaster.