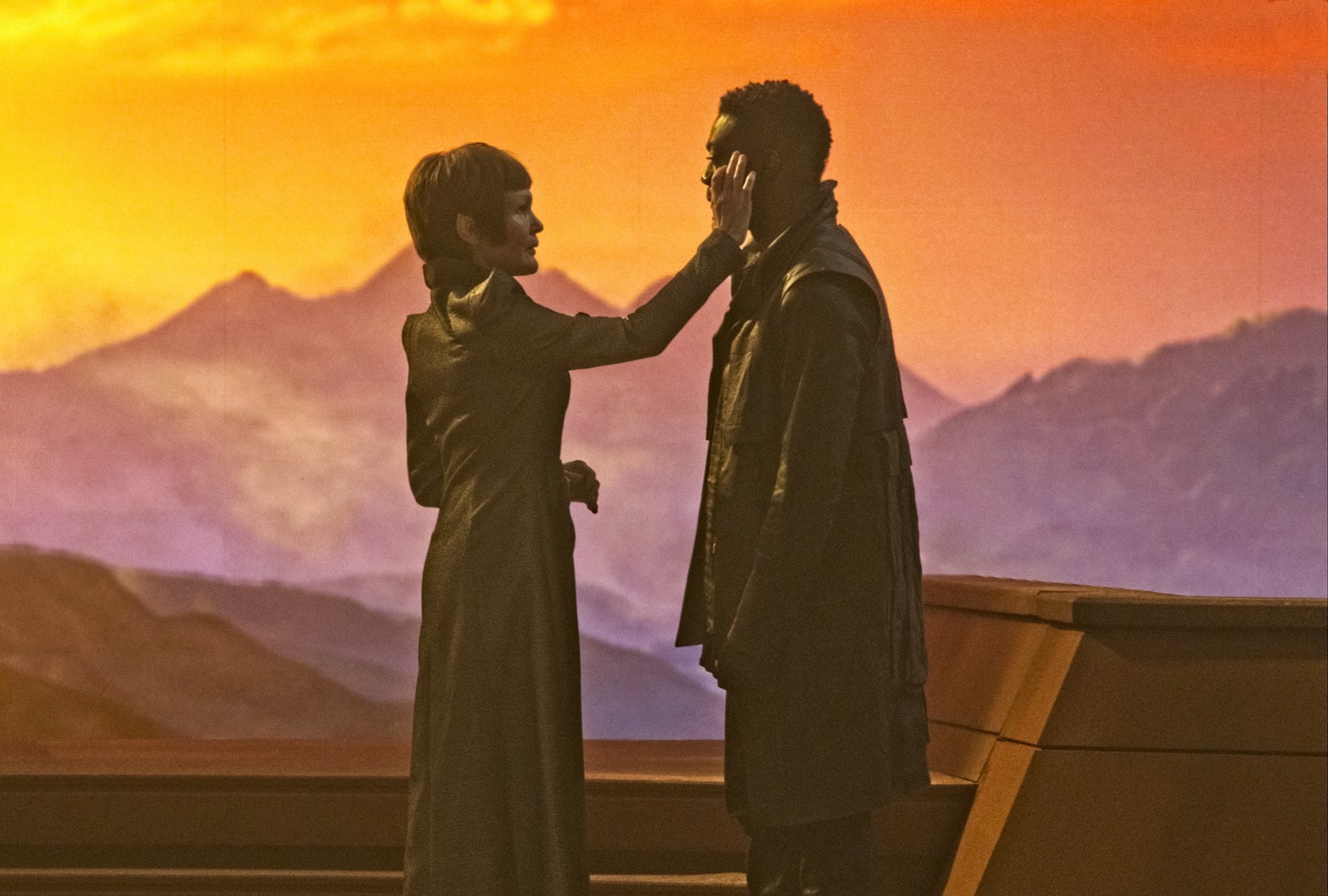 Star Trek: Discovery tries to serve multiple masters in Season 4 episode “Choose to Live” and the end results are predictably muddled. Perhaps it was always going to be difficult to balance Michael’s mission to track down a rogue Qowat Milat -who killed a Starfleet officer while stealing dilithium with Commander Stamets’s trip to Ni’var to collaborate with the Vulcan-run Science Institute.

And that’s without throwing Book’s evolving grief, the attempt to move Gray’s consciousness to a synthetic body, and Tilly’s new self-improvement journey in there too. But the result is an episode that doesn’t really stand out in any significant way. (Save for the fact that David Ajala continues to impress, even with reduced material.)

This is not to say, though, that “Choose to Live” isn’t a generally decent hour of television; it is. It’s just not quite as good as the two episodes that preceded it. And there’s no sign of Grudge, which is always deeply personally upsetting to me. Or perhaps I am just a monster who found the resolution of the rogue Qowat Milat nun’s story a little too conveniently pat. (Michael sure did fix that cryostasis problem fast, huh?) But, at the very least, the hour shows us a Discovery that’s gamely trying to wrestle with big questions about what an entity like the new reconstituted Federation is supposed to be and do.

The Qowat Milat situation also neatly dovetails with the season’s larger themes concerning the compromises and difficult choices Michael is finding herself forced to make as a captain. In “Anomaly,” she had to purposefully risk someone she cared about in the name of the greater good, this week she has to swallow down some of her more idealistic notions about what justice should look like in the name of political expediency. The question of whether renegade Qowat Milat member J’Vini will appropriately pay for her crimes is left up in the air, particularly given how seriously – and sacredly – the Romulan group takes the whole idea of lost causes.

On many levels, Gabrielle is right, and context does matter. But Michael is too – J’Vini did kill several innocent people, and even if she did so in the name of protecting an alien species from going extinct that still doesn’t make murder okay. Though “Choose to Live” is clear about this distinction and the messiness it results in, the fact that it ends with Gabrielle’s group essentially making a vague promise that J’Vini would face consequences before just peacing out entirely feels like a pretty convenient dodge.

Discovery also doesn’t give us enough real focus on Michael’s relationship with her mother to make this specific side quest worth it. (I don’t know about y’all but I’m not particularly interested in Gabrielle’s relationships with her fellow Qowat Milat .) The closest it comes to a meaningful moment is during the scene with Tilly in which she rattles off all the ways her mother was a terrible parent who didn’t even like children, but that doesn’t mean she wouldn’t hug the crap out of her if she had one more chance to do so.

Clearly, this is meant to force the Burnham women to address the friction between them, because they’ve been gifted with just such a miraculous second chance. But somehow Gabrielle actually shares a more meaningful scene with Tilly in this episode than she does with her own daughter. (And her explanation of how paths can end and change in life without our necessarily realizing it when it happens is really quite good.)

Where, exactly, Tilly’s arc is actually going this season remains unclear. It seems unlikely that she’ll suddenly decide a future in Starfleet is not for her, especially not when she’s so irrevocably bonded to the only other people who understand her complicated feelings about their time displacement. But it feels natural that she might want to reevaluate where she is, professionally and personally, after having gone through so much since her arrival in the 32nd century. What’s ultimately next for her, however, we’ll have to wait and see.

Elsewhere, the Ni’var scenes are probably the most compelling of the episode from an emotional and character perspective, from Stamets’ desperation for an answer to his DMA mystery to Book’s decision to mild meld with T’Rina in the hope of finding answers to what happened to Kwejian. The latter was beautifully handled – David Ajala is truly doing such good work this season – and while it’s not a panacea for his pain, Book’s emotional realization that at least his nephew didn’t die without knowing he loved him is a necessary sort of catharsis.

The fact that he’s wearing his coming-of-age amulet again by episode’s end, after all this time – and after Leto specifically asked why he didn’t wear it back in the season premiere – well, it got me right in the heart, and feels something like a little slice of much-needed peace for a character that has been through it the past couple of episodes.

The visual composition of the Ni’var scenes is gorgeous – The Science Institute has some seriously great views! – even if they’re mildly disappointing when it comes to their actual science content. Was I the only one expecting the Vulcan scientists to perhaps be more forthcoming about what, precisely, the DMA might be, rather than simply shoot down Stamets’ only functional theory? Obviously, Discovery can’t solve their season-long mystery in the third episode, but a little bit more help and collaboration here might not have gone amiss.