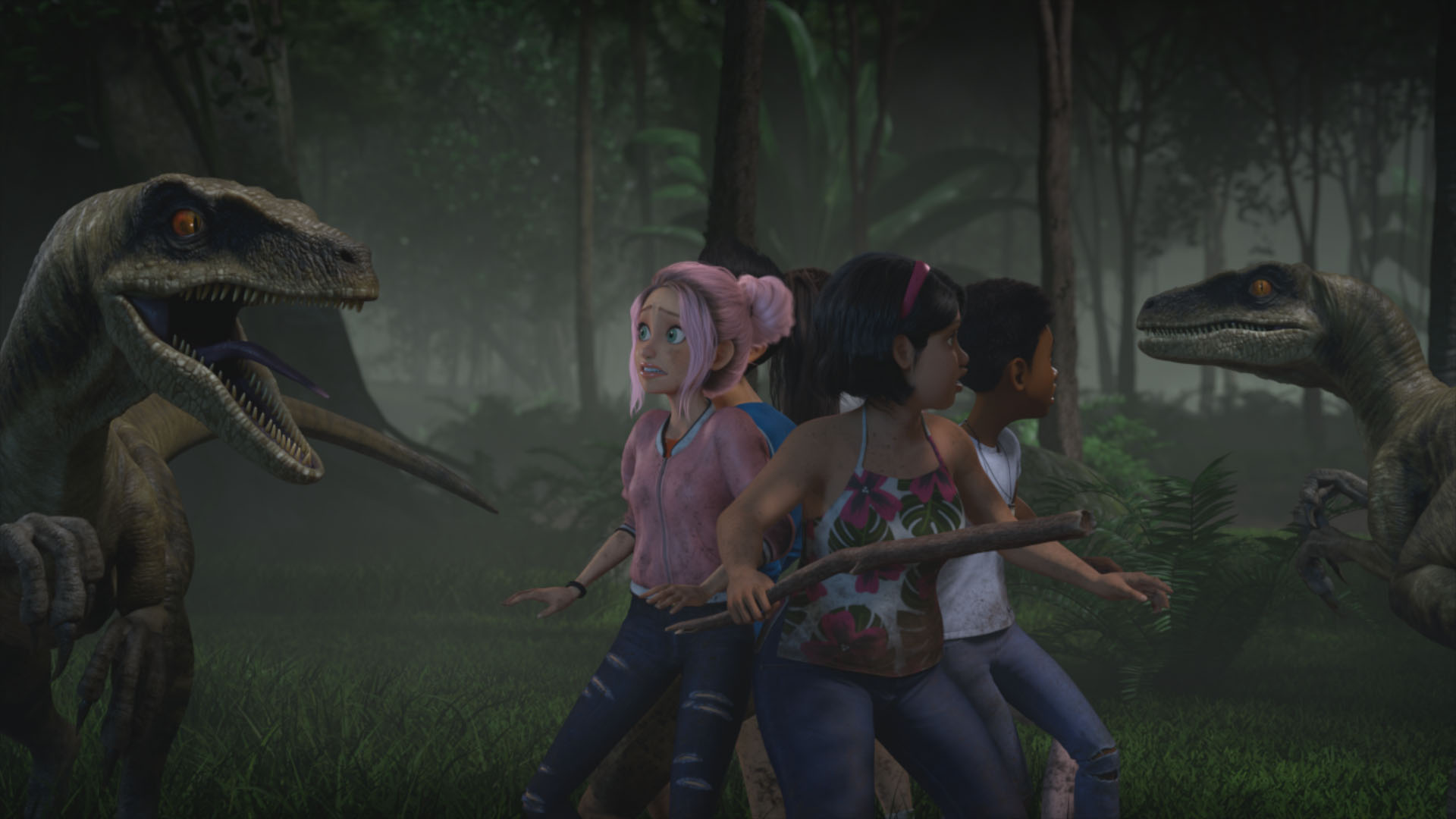 When Jurassic World Camp Cretaceous brought a PG cartoon into the PG-13 live action franchise, it was unclear whether the eight-episode first season would continue into a second. But the six kids trying to get off Isla Nublar during the events of Jurassic World have now earned themselves a fourth—extra long—season, with eleven episodes of action, that end on a big reveal, indicating that there’s more fun to come.

Will the campers—Darius, Brooklynn, Kenji, Sammy, Yaz, and Ben—ever get home? In this season they finally leave Isla Nublar behind, but it’s more of an out of the frying pan, into an evil dinosaur fighting operation kind of experience. Read on for more of where the kids end up, and guesses at what we might expect from season 5.

The villainy of Mantah Corp has been looming over the series since the beginning. Sammy’s opportunity to beta test the camp came with a price: Mantah Corp was blackmailing her family, and Sammy had to provide the rival organization with data and cell samples. Early on, she swabs the cheek of a Sinoceratops, and in season 4, that comes back to haunt her. The sample she took has been used to create new baby dinosaurs, hybrids of the Sinoceratops and Spinosaurus (Spinoceratops?), making Sammy feel directly responsible for their fate.

Now a much larger extent of Mantah Corp’s operations is revealed. They have Dr. Turner studying dinosaurs under false pretenses, monitoring their brainwaves to learn more about dinosaur behavior. But part of their experiments involves seeing how much punishment dinosaurs can take in biomes they aren’t suited for, and whether they can make the dinosaurs more aggressive. Worse, when Kash discovers some of Dr. Turner’s notes, he realizes he might be able to mind-control the dinosaurs (and it’s clear that spoiled, angry techie Kash is so preoccupied with whether or not he can, he’s not even in the same zip code as whether he should).

It’s clear how much the Camp Cretaceous team wants viewers to have empathy for the dinosaurs, as one of the most intense episodes features a forced “cage match” style battle between Tyrannosaurus rex Big Eatie and Kentrosaurus Pierce. The campers put themselves at huge risk in order to try to stop the fight, and that moment shapes the rest of the season: Darius is caught by Kash, and lies about how he made it to the island “alone,” and spends several episodes on a solo mission, working to undermine all of Kash’s operations with only brief connections to the camp fam.

Mantah Corp’s worst secret is only revealed in the season finale, in which Kash’s boss, Daniel, is revealed. For viewers of LEGO Jurassic World: The Legend of Isla Nublar, the name Daniel might immediately bring to mind Danny Nedermeyer, who is constantly trying to destroy Jurassic World to avenge his uncle, Dennis Nedry, who was killed by Dilophosaurus in the original Jurassic Park. The idea that Camp Cretaceous might take a ridiculous character from the LEGO franchise into a more serious, sinister villain who could potentially crossover into Jurassic World: Dominion is amusing, but ultimately not how the story plays out.

The Mantah Corp boss and Kash have arranged a trap for the campers, and when they’re all surrounded by murderbots, Daniel’s true identity is revealed: he’s Kenji’s neglectful dad. Over the course of the series, we’ve seen that Kenji’s a lonely rich kid, whose father owned a penthouse on Isla Nublar, but didn’t have much time to spend with his child. We don’t know where Kenji’s father was the day of the Indominus Rex escape, or why such a wealthy dad never tried to send a rescue mission for his son. It turns out that Kenji’s father has been working for a rival company all along—with Kenji apparently completely unaware of his father’s connection to the evil company, given his surprised (and somewhat incredulous) greeting: “Dad?” Roll credits and hope for season 5.

At the end of season 3, Kenji was furious that Darius had intended to let Brooklynn sacrifice herself to keep data out of the hands of the bad guys. After an intense episode of watching a flash drive copy pertinent information from a laptop, all while Brooklynn’s life hangs in the balance, Kenji says he won’t forgive Darius for risking their friend.

The fight comes to an end relatively quickly, much to the larger benefit of the season, as this show’s strength is in the found family and teamwork aspects of its teen cast. But in the process, Kenji reveals to viewers, if not to his friends, that he’s realized he has a crush on Brooklynn. What’s more, formerly-aloof Yaz notices the change as well, and tries to play Kenji’s wingman.

The crush, and the question of whether Brooklynn likes Kenji, too, becomes a frequently touched on theme over the course of the season (and leads to one of the best jokes in the season when Kenji calls Brooklynn his girlfriend to Darius—the doubletake from Darius is perfectly timed and provides some fantastic levity in an otherwise intense season finale). We also see some romantic responses from others. Ben mistakes attentiveness from Yaz as a romantic interest and indicates that he’s still figuring himself out—he’s in no place to get involved with anyone that way. There are also some hints (mostly in some sly eyebrows from Brooklynn) that Yaz and Sammy’s friendship could develop into something more. There’s a moment of the “there’s only one bed” trope between the two that, sadly for shippers, goes nowhere, which may mean the two will always just be besties.

And finally, Darius and Kenji’s bromance is restored in the season finale. Though the pair got off to a rough start, their friendship—and their acknowledgment of each other’s strengths—has helped them both grow as characters over the course of the series. After a rough start, it’s great that they’re back on track, especially as things may have gotten a lot worse.

The People (and Places) Left Behind

When the kids rescue the baby Spinoceratops, they have to find the right biosphere for them to live—leading the campers to have to leave them behind. It’s exactly the kind of thing Ben feared after having to leave Bumpy behind. When Brooklyn says, “Besides, we can always come back and visit,” it’s a jarring moment set against a narrative of campers trying so hard to get away from the island(s) holding them captive. The line is said and forgotten, with none of the other characters calling attention to it, but it may leave viewers wondering how the campers really view their fate—do they believe they’ll get home after all? Or have they given up?

As for Bumpy, the Ankylosaurus was sadly left behind on Isla Nublar, but her absence is a constant emotional ache for Ben. During season 4, when some new baby dinosaurs are introduced, Ben makes the comment that Bumpy’s probably forgotten all about him. In a tear-jerking episode-ending scene, viewers see Isla Nublar and the camp the kids had to leave behind—with Bumpy, wandering around, seemingly waiting for Ben to return.

Another character comes into play who the characters have left behind. In one brief moment, Darius has access to a cell phone and calls his brother, Brandon. Though it’s cut off, the call connected, and viewers see Brandon leaving home to go looking for Darius. This feels like a call back to season 1, when counselors Roxie and Dave try to convince the ferry to turn around to rescue the campers, or the moment in season 2 when viewers see that the emergency beacon’s distress call was received. There are people throughout this series who have tried to help the kids get home—and who have pledged to look for them—and when the series does come to a final conclusion, it would be nice to see some payoff for those moments of promised rescue.

So will we likely see any crossover between the Camp Cretaceous cast and Jurassic World: Dominion? The longer the cartoon series seems to go on, the less likely that seems, given how much more quickly each season of the show can move the plot along—and that Jurassic World: Dominion was originally scheduled for 2021 and pushed back due to the pandemic. While the Camp Cretaceous writers have access to the live action information, where the series will end up is anyone’s guess. In the timeline, the campers are in 2016, still two years before the events of Jurassic World: Fallen Kingdom, which means any crossover would require the series to zoom ahead.

Of course, the kids still have that flash drive of stolen data (we hope) that they had planned to turn over to the authorities in Costa Rica to keep Dr. Wu from creating more hybrids. And if Mantah Corp plays any part in Jurassic World: Dominion—because it seems like a rival bioengineering group also cloning dinosaurs could be a world-impacting event—then perhaps eyewitnesses from the campers could be part of bringing the villains down.

But even if there’s not a payoff in Dominion for Camp Cretaceous fans, it’s clear that the series is set fully in the Jurassic World setting. From the reappearance of Mr. DNA in Darius’s bedroom to Darius saying his favorite action hero is Dr. Alan Grant—to the very dangerous group of Dilophosaurus the campers encounter, spitting venom like their movie counterpart (but not, it should be said, their real-world inspiration), those seeds of the larger setting fill Camp Cretaceous, firmly establishing it as canon.

But until we have a season 5—in which we can expect Kenji and his father to have a reckoning, and maybe, just maybe, finally bring the campers home—or until Dominion hits theaters in 2022, we’ll just have to keep guessing.

Loki Season 2: The Timekeepers Are Back in New Trailer
How to Find a PS5 and Xbox Series X In 2023
Pizza Tower Is the Best New Wario Land Game We’ll Probably Ever Get
FLASH FACTS | Official Trailer
MILESTONE GENERATIONS OFFICIAL TRAILER