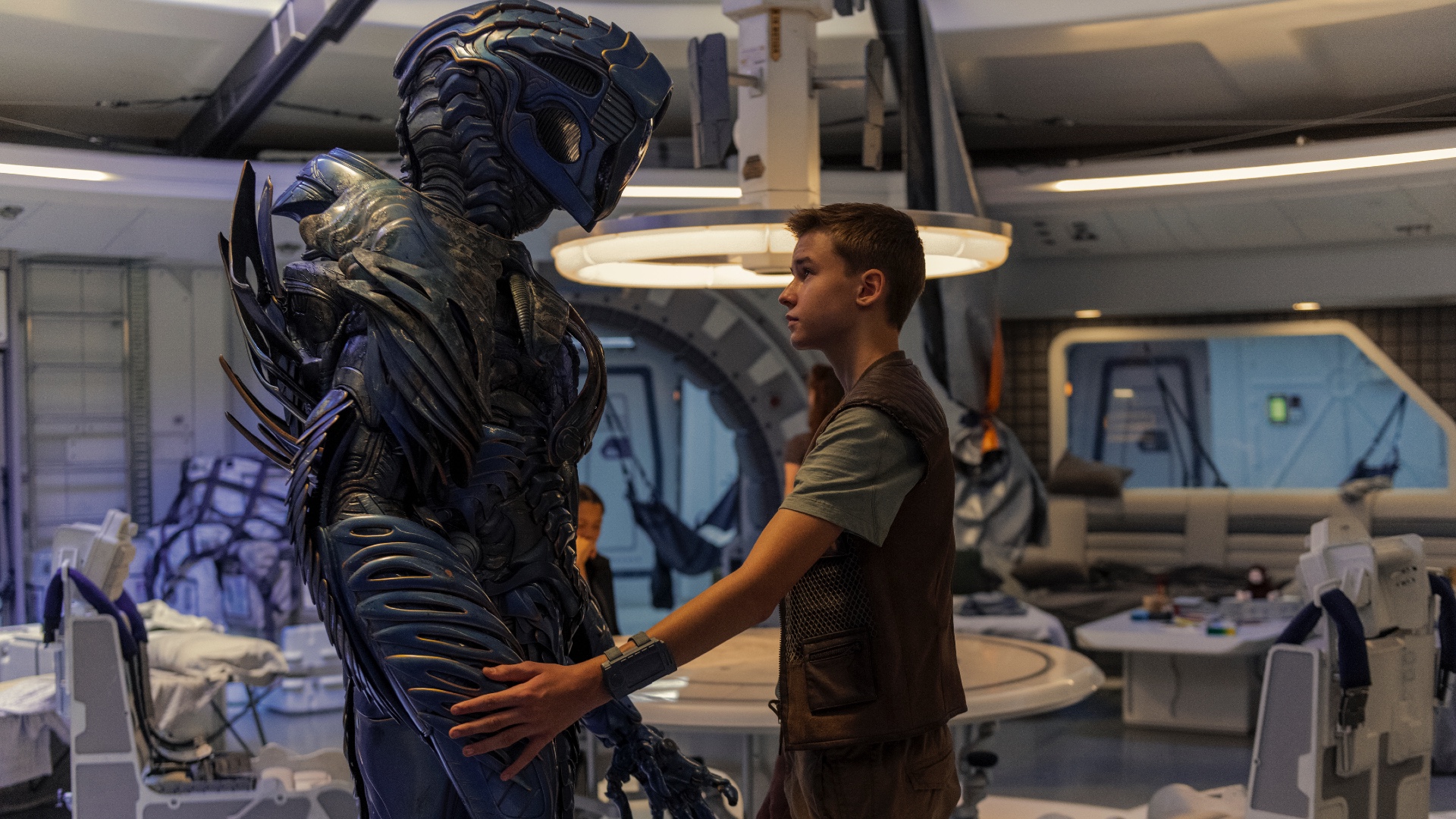 This article contains spoilers for Lost in Space season 3.

There’s nothing a human being loves to see on screen more than a robot.

Maybe it’s because the idea of a robot forces us to reckon with the act of creation and ultimately empathize with whatever created us having to watch helplessly as we stumble from one existential crisis to another. Or maybe it’s just because robots are cute and say “beep beep boop boop.”

Whatever the reason, no sci-fi franchise understands humanity’s fascination with robots better than Lost in Space. The 1965 TV series established one of the all-time iconic robot designs with the bumbling yet helpful B-9 model environmental control unit dubbed  “Robot.” The 1998 Lost in Space film then reimagined Robot as a sleek and powerful protector for the lost Robinson family.

Netflix’s Lost in Space series, which premiered its third and final season Dec. 1, unveiled the most complete and dramatically rich interpretation of Robot yet. The Robinsons Robot is just one of many war machines created by an extinct extraterrestrial race. Though Robot befriends Will Robinson and ultimately the rest of his family, his robotic peers remain hellbent on destroying the human colonists of Alpha Centauri for stealing their interstellar travel technology.

In some ways, Lost in Space is the logical conclusion to more than 50 years of the original show’s fandom. The original Robot wasn’t sexy (which is apparently a thing that a robot can be) nor particularly adept. But he was beloved. And over the years, fans’ love for Robot only grew. It’s only fitting then that the Robot in Netflix series would be the structural lynchpin of the entire story that the show is seeking to tell.

Now that the latest iteration of Lost in Space has wrapped, it’s worth delving deeper into its depiction of the iconic Robot. We spoke with Lost in Space creators Matt Sazama and Burk Sharpless, and showrunner Zack Estrin about what Robot was and why he mattered. One note to avoid confusion: the character known as “Robot” will always be capitalized where the robot “species” will be lower-case.

Who Were Robot’s Creators?

For the first time in the series, Lost in Space season 3 acknowledges and reveals who created Robot and his kind…sort of. When Will and Robot visit a lost civilization’s city, Will discovers some primitive art and a distinctively shaped skull that suggests the robots were created in the image of their creators.

That is fairly terrifying to consider since the robots are large, gangly beats with four arms. It’s also somewhat telling of that alien race’s hubris. Even humanity generally avoids creating artificial intelligence in its own physical image. The psychological concept called “the uncanny valley” posits that humans will view creatures that look like us but not exactly like us with mistrust. That apparently wasn’t an issue for the robots’ forebearers.

That alien society is long gone but the robots remain, instilled with programming code to protect and preserve a civilization that no longer exists. That makes their story a bittersweet one.

How Many Robots Are There?

Lost in Space never provides a full head count for the amount of robots in action throughout the series. In the climactic scenes of the seasons 2 and 3 finales, however, there appear to be at least dozens of robots and maybe even hundreds. Ultimately that should be more than enough firepower to eradicate the human problem from their interstellar neighborhood as robots are very powerful.

Though we don’t know the exact number in play, there are a handful of “main” robots that the Robinsons and Alpha Centauri colonists have encountered and named. The first is, of course, Robot himself. Then there’s the series antagonist SAR (or “Second Alien Robot”). There’s also Scarecrow, a robot the jerks aboard the Resolute enslaved to harness interstellar travel. In the show’s final episode, Penny Robinson befriends a robot she names Sally.

All in all, that’s a lot of robots with names for actors to keep track of…particularly when the robot might not be physically in a scene with them. Though Robot is portrayed by a performer named Brian Steele in an actual suit, the other robots could be a combination of practical and digital effects.

“We did a scene this season where we end up being able to contact the kids through Robot and Scarecrow,” Maureen Robinson actress Molly Parker says. “Our Robot is a brilliant performer that we can relate to. But this one was all special effects. So what they had instead was this guy in a gray body leotard with this huge, Kool-Aid guy head. It had green dots all over it. I had to have this scene of talking to my children and then hugging it.”

According to showrunner Estrin, the task of keeping the various robots distinct comes down to equal parts writing and special effects work.

“One of the hardest things to do with CGI is body language,” he says. “We pay a lot of attention to how to make Robot, SAR, and others feel completely different even though they look the same. We have to convey that through the change in their faces and how they carry themselves. It’s not just like Scarecrow is gold and SAR is brown. They each have a different tenor in their mechanical whirs.”

Why Do Robots Change Appearance?

Though the robots generally look the same, sometimes they are capable of physically transforming. Recall back in the series’ first episode when Will first encountered “his” Robot. Robot was in duress and had the usual robot appearance complete with six sharp limbs. After being saved by Will, Robot’s features softened and he adopted a bipedal stance.

This change in appearance wasn’t about the Robot suddenly becoming more “civilized” or “human.” In reality, he just wanted to be more like his new hero, little Will Robinson.

“Part of the original idea was that the Robot was going to bond with Will and he was going to transform his body so that he was a human approximation of Will Robinson,” Burk Sharpless says.

Oftentimes throughout the series, when a Robot comes to empathize with a human companion, it decides to reject its creators’ original appearance and adapt its features to be more human-like. We see this happen when Penny befriends and saves Sally. This transformation isn’t always the case though. Despite spending a lot of time with humanity and even befriending Ben Adler, Scarecrow never sheds his more alien look. According to the Lost in Space producers this was by storytelling design.

“We didn’t want it to be ‘in order to be good as a tobot you have to look human,’” Estrin says. “When we see Scarecrow in season 2 it was important to us that he doesn’t change shape. It’s at the heart of Lost in Space. Everybody has the power to be good.”

How Do the Robots Factor into the Lost in Space’s Endgame?

Robot and his fellow robots were always set to play a major role in every act of Lost in Space.

“From the very beginning we knew the arc of the Robot’s relationship to those who built him would 100% be the three-act structure of the show,” Sharpless says.

That three-act structure comes to its fruition in the Lost in Space series finale, titled “Trust.” Though the finale is ostensibly about humanity finding a way to save Alpha Centauri and preserve its opportunity to survive, away from Earth in the far reaches of space, the real emotional struggle at play is all between robots. When a weakened Will and Robot make their way to a robot stronghold to make their pitch for cooperation, it doesn’t go over too well. That’s because the only way that Robot can explain the mutually beneficial relationship between him and Will is through some (admittedly adorable) cave art.

It’s not until later, during the battle at Alpha Centauri, that humanity is able to make its pitch to the robots via action. When Penny saves one robot from certain destruction, that robot finally sees the appeal to companionship rather than war. Several other robots are then convinced to join the struggle against SAR as equals.

“It’s never been about the Robot becoming Will’s servant,” Sharpless says. “The whole show is about evolution and becoming who you are and becoming the best version of yourself. The allegory and the literal narrative of the robots becoming emancipated from those who originally built them was gonna mirror what it meant to grow up, be part of a family, and be the best version of yourself.”

Becoming the best version of yourself is hard for anyone, let alone an ancient species or militaristic robots created by an extinct civilization. Poor SAR can never get with the program. His battle cry to the end is a chilling “No masters. No heart.” He becomes fixated on destroying Will’s literal heart as a way to end what he views as a supernatural hold over Robot. In the end, that misunderstanding is his downfall.

“There are shots you’re gonna see in the final episode that we had in mind before the pilot,” Sharpless says. “It always came down to the allegory of programming. You’re made a simple way or you think you are. What does it mean to be a free-thinking person or a free-thinking Robot?”

In the end, what’s best for a robot and best for a human seems to be the same thing: some friendship.

The Last of Us: Are the Infected Actually Zombies?
Pizza Tower Is the Best New Wario Land Game We’ll Probably Ever Get
Should Marvel Change MCU Strategy on Disney+?
Sci-Fi Short Film “The Kid” | DUST | Throwback Thursday
Dead Space Remake: How to Unlock Every Suit