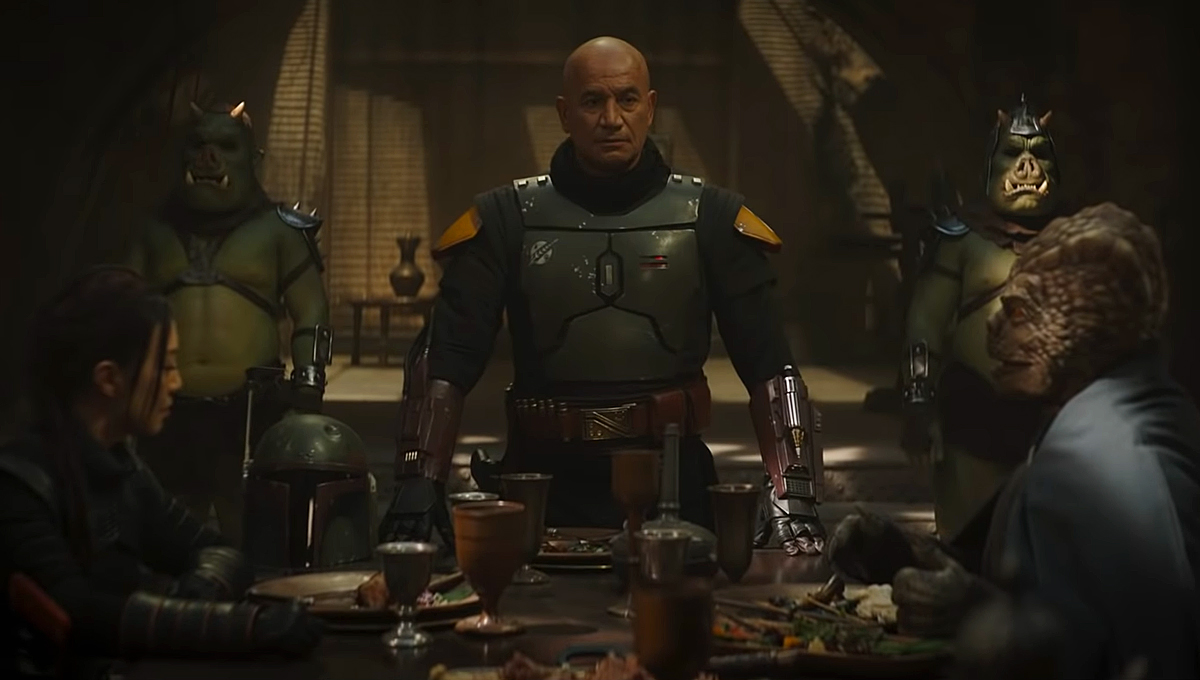 Boba Fett’s return last season on The Mandalorian finally confirmed an idea that was long-reflected across decades of Star Wars comics and novels, that being his escape from an alleged millennium of digestion within the belly of the dreaded Sarlacc. While clues were visible on Boba’s face, a full explanation about how he eluded that Return of the Jedi-dealt fate was not provided. Fortunately, it appears that imminent spinoff series The Book of Boba Fett is bringing the answers.

Temuera Morrison’s manifestation as Boba Fett fulfils a franchise destiny, with the actor having played the cloned character’s genetic template father, Jango Fett, in 2002 Star Wars Prequel Trilogy middle act Attack of the Clones, in which Daniel Logan played a child Boba. Poetically, Boba’s adult arc on The Mandalorian Season 2 saw the bounty hunter building himself back to form from his horrific, anti-climactic, identity-stripping tumble into the Sarlacc’s massive maw. Yet, clues reside in his very countenance, which clearly displays acidic scarring seemingly attributed to the creature’s digestive juices, implying that he didn’t escape the ordeal unscathed; a notion boosted by recent teaser footage of Boba’s recovery in a familiar bacta tank. As Morrison tells SFX Magazine, The Book of Boba Fett will prove revelatory on that front.

“There will definitely be a number of answers,” declares Morrison. “Some long-winded answers. Some short and sharp answers. Some colorful answers. We’re filling a lot of gaps.”

Despite some promising initial steps already taken on The Mandalorian toward repairing Boba’s reputation, the answers provided on The Book of Boba Fett still need to be profound and impactful. After all, while the character has remained popular in the annals of the Star Wars franchise, his long-believed death in Return of the Jedi left his reputed toughness in a deficit. It’s an understandable result from having squandered years of building Boba—as originally played by the late Jeremy Bulloch—as a stoic, fearsome force standing ominously in the periphery, only to have him meet a shameful slapstick ending when an accidental staff swing on his jetpack from a carbonite-blind Han Solo ignites the device, sending him flying uncontrollably into the Sarlacc below as his frightened shriek of a comedic, movie-conventional “Wilhelm Scream” sample cements his humiliation.

Indeed, the Sarlacc plunge, a punishment that Jabba the Hutt described via C-3PO’s translation as “a new definition of pain and suffering as you are slowly digested over a thousand years,” seemed to carry a grim finality for our roguish intergalactic hustler, who was just trying to makes some scratch by delivering Han Solo—albeit to certain death. However, the myth of Boba Fett would prove stronger than anything that George Lucas whimsically actualized in Return of the Jedi, since fans and creators of various printed apocrypha would subsequently spend decades conceptualizing scenarios in which the bounty hunter emerges from the pit to continue his roguish exploits across the galaxy in the Slave I (or whatever the ship will be renamed). In fact, these survival theories had become so commonplace that those who actually accepted Boba’s death had clearly fallen into the minority amongst the fandom.

The first of what would be several survival scenarios arrived in 1984, the year following Jedi’s release, in the pages of Marvel Comics’ Star Wars #81. That issue showed how Boba’s Mandalorian armor protected him from the Sarlacc’s digestive juices, allowing him to use his (still-functioning) jetpack to have himself essentially belched out of its belly. Yet, the ordeal initially leaves him unconscious and amnesia-stricken on the sand dune, where he’s picked up by Jawas, who, based on his armor and disheveled state, mistake him for a droid, and bring him aboard their sandcrawler, where they even give him the old restraining bolt treatment. Coincidentally, R2-D2 is in the midst of a repeat experience, and happens to be on the same sandcrawler, after which Han Solo arrives for a rescue and experiences a shocking reunion with the memory-wiped bounty hunter he’d just sent down the pit. However, after a temporary détente, Boba’s memory returns, instigating a battle that ends with the entire sandcrawler plummeting into the Sarlacc—with Boba in it! Thus, the first survival scenario oddly restored the film’s status quo.

Of course, several other post-Sarlacc scenarios surfaced for Boba in works Disney now deems the “Legends” lore, notably in the subsequent franchise tenure of Dark Horse Comics. In fact, Dark Empire, by Tom Veitch and Cam Kennedy, depicted a more detailed rendition of the tale, in which he was bound by the creature’s internal tendrils as enzymes slowly ate away at his armor and flesh, forcing him to fight furiously to crawl out from the pit; an ordeal that ended with him exploding the creature from within. The development would be complemented by K.W. Jeter’s novel, The Mandalorian Armor, which reveals how fellow Empire Strikes Back bounty hunter Dengar found Boba in the Great Pit of Carkoon, rehabilitated him, after which the former rivals enjoyed a brief alliance. However, with the stories of that era not being spun with serious standards, they were never truly consistent, relegating them to the same mythical status as the imaginations of fans.

While it’s possible that The Book of Boba Fett will borrow some Legends elements (similar to how the krayt dragon’s fragmented fate on The Mandalorian was evocative of Dark Horse’s exploding Sarlacc), the variables are clearly different in Star Wars’ emerging small screen canonical universe. This is proven by Boba’s quest on Tatooine’s Mos Pelgo region to recover his signature Mandalorian armor from marshall Cobb Vanth (Timothy Olyphant). While he would ultimately recover the armor from Din Djarin, who earned it from the marshall in a bit of quid pro quo, we’re still left with a mystery about how Boba lost it in the first place, especially if it played a key role in his Sarlacc survival. The purportedly canon-acknowledged 2015 novel, Star Wars: Aftermath, by Chuck Wendig, reveals that Vanth (who was created for the novel), obtained it by killing a Red Key Raider, who obtained it from Jawas. Consequently, a version of Marvel’s Jawas scenario might just manifest here.

Thankfully, there’s only a few short weeks until we start getting some answers, with The Book of Boba Fett set to premiere on Disney+ on Wednesday, December 29.

The Snow Girl Ending Explained: Amaya, Murders, Season 2
Pizza Tower Is the Best New Wario Land Game We’ll Probably Ever Get
Small Town | Marvel Studios’ WandaVision | Disney+
The Last of Us: What Happens to Bill and Frank In the Game?
HBO’s The Last of Us: The Changes to Bill’s Story and the “Parallel Universe” of TV