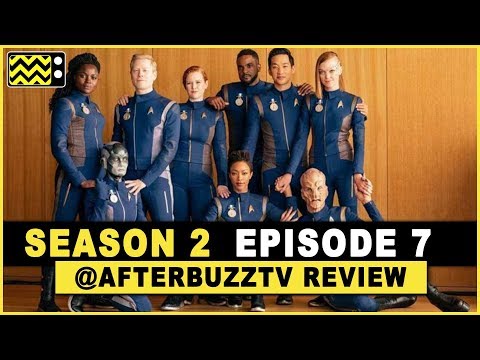 Ads by Amazon
Share on Facebook
Share on Twitter
Share on Pinterest
Share on LinkedIn
Christian Bladt, Flobo Boyce and Frank Moran go down the rabbit hole and break down Season 2 episode 7 of Star Trek: Discovery.  Spock is finally here! Are we satisfied with his first appearance? Is Sarek’s logic sound? How do Burnham and Georgio do in selling their fake fight?  And will Staments always be Discovery’s cheat code to get out of dangerous situations? We talk all that as well as give our reactions to the latest Trek news and Screenrant’s ranking of the Star Trek films.  Join us!

Star Trek Weekly, is a weekly podcast for fans of Star Trek. Hsoted by Kari Lane, Frank Moran, and Christian Bladt, the team will be breaking down each episode of Star Trek Discovery during the seasons, and in the off time covering classic episodes and topics related to the Star Trek Universe year round!

Star Trek: Discovery is an American television series created for CBS All Access by Bryan Fuller and Alex Kurtzman. It is the first series developed specifically for that service, and the first Star Trek series since Star Trek: Enterprise concluded in 2005. Set roughly a decade before the events of the original Star Trek series and separate from the timeline of the concurrent feature films, Discovery explores the Federation–Klingon cold war while following the crew of the USS Discovery. Gretchen J. Berg and Aaron Harberts serve as showrunners on the series, with producing support from Akiva Goldsman.

Sonequa Martin-Green stars as Michael Burnham, the first officer of the USS Shenzhou and later the USS Discovery. The new series was announced in November 2015, and Fuller joined as showrunner the next February. In addition to Fuller and Kurtzman, who wrote for previous Star Trek series and films, respectively, the crew includes several other previous Star Trek creatives. Fuller wanted to make an anthology series, beginning with a prequel season to the original series, but CBS asked that he make a single serialized show first. In October 2016, after further disagreements with CBS and struggles with other commitments, Fuller left the series. Berg and Harberts took over day-to-day production using a mythology and broad story arc established by Fuller, while Goldsman joined then as support.

The production put emphasis on carrying on the legacy of the previous series, including making efforts to feature a diverse cast. The values and designs of the Federation were updated for the series, but were expected to evolve towards those of the original series throughout Discovery’s run. The show also heavily features the Klingon species, with the intent of exploring the central conflict from both perspectives. The Klingons were redesigned for the series, with influence from their previous appearances, the original inspirations for the species, and the novel The Final Reflection, as well as research on biology and evolution. The Klingon language is also extensively used. Discovery is filming in Toronto, and has filmed on location in Jordan.

Marvel Studios’ Ant-Man and The Wasp: Quantumania | Experience
Should Marvel Change MCU Strategy on Disney+?
The Last of Us: How Long Does It Take to Beat the Games?
DC Movies and TV Shows: Full DCU Schedule
Batman: The Doom That Came to Gotham | Trailer | DC