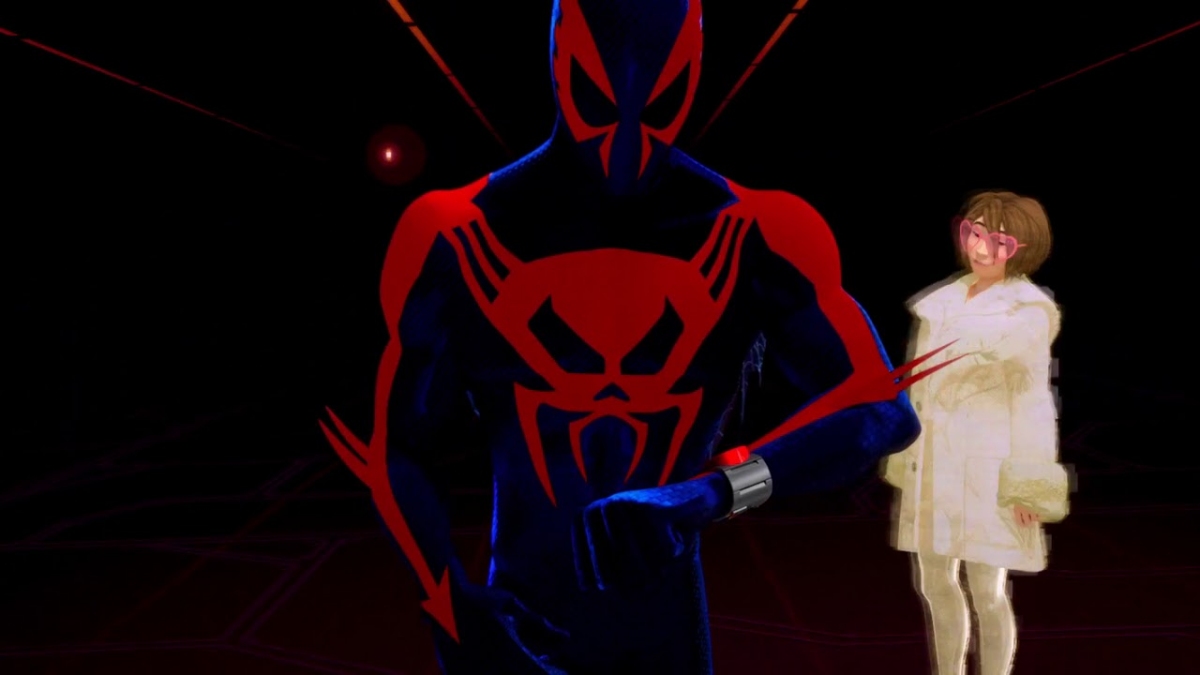 The trailer for Spider-Man: Across the Spider-Verse (Part One) gives us plenty to be excited about, but it’s also all about following up on the two big cliffhangers from the first movie. The main part of the trailer focuses on the aftermath of the final scene of the first movie, where Gwen called out to Miles from beyond his reality. The more exciting part of the trailer has Miles Morales flying uncontrollably through the multiverse, almost finding stability until being tackled in mid-air by yet another Spider-Man.

Of course, this isn’t the first time we’ve seen this guy. Spider-Man 2099 appeared in the post-credits of Spider-Man: Into the Spider-Verse, voiced by Oscar Isaac, and it’s hinted that he may have had more to do with the movie’s plot than a teaser gag referencing an internet meme.

Spider-Man: Across the Spider-Verse (Part One) Trailer

While he initially looks like a threat, Spider-Man 2099 seems to be more about protecting Miles than anything else. He also appears to be the leader of whatever adventure these Spider-Folk are going to embark on.

More on that in a sec.

Miguel O’Hara made his comic book debut in a preview backup in Amazing Spider-Man #365 in 1992, followed shortly after by Spider-Man 2099 #1. He was created by Peter David and Rick Leonardi and was the beginning of the Marvel 2099 line of comics.

In the initial comics, records of the Marvel Universe’s present were rare and mostly missing. The gist of it was that some big civil war happened, the age of superheroes ended, society collapsed, society cleaned itself up, and then…the future! While superheroes were a thing of the past, 2099’s society worshiped Thor as a religious figure, with many believing he would one way make his big return and save them all.

Miguel was a scientist working for a corrupt corporation called Alchemax, located in Nueva York. They were so corrupt that his boss got him hooked on a highly-addictive drug that only they had legal access to just to keep him from quitting. Miguel was already messing with genetics in a failed attempt to recreate the accident that caused Peter Parker to become Spider-Man, so he figured he’d just rewrite his addicted biology with a DNA backup of who he used to be. Due to sabotage, Miguel’s DNA was merged with spider DNA and he grew talons, fangs, and so on.

During his origin, Miguel ran into what was essentially a cross between a Thor cosplayer and a street prophet, who believed Miguel to be the second coming of Spider-Man. This stranger saw this as a major development, as it was the beginning of a foretold new age of heroes. Heroes from the past would be reintroduced, leading to the prophesied return of Thor!

46 issues of Spider-Man 2099 later, the 2099 imprint’s existence initially came to an end. In 2099: Manifest Destiny, “Spider-Man 2099 begets Thor’s return” was revealed to mean that Miguel was worthy to lift Mjolnir. Using the hammer to slow his aging, Miguel spent the next thousand years creating a galactic utopia, bringing a fitting end to his story arc.

But this is comics and nothing can be left alone. A version of Spider-Man 2099 was brought into the dimension-hopping series Exiles for a time. Marvel briefly tried doing a completely different 2099 line with a new Spider-Man. As for the original Miguel, he kept bouncing back and forth between his era and the present, which also led to the big Spider-Verse comic event. All of this altered his continuity enough that they could keep doing stories with him without that whole Mjolnir finale giving it closure.

And yes, in the multiverse, there does exist a cartoony Spider-Ham 2099 named Piguel.

Spider-Man 2099’s Role in Spider-Man: Into the Spider-Verse

The post-credits scene in Spider-Man: Into the Spider-Verse saw Miguel put on a special gizmo that will allow him to hop to different universes without shorting out and molecularly falling to pieces over time. As his AI hologram companion Lyla gives him the gist of the movie’s plot, Miguel sets to test out his new tech for reasons we aren’t privy to. This leads to him meeting the 1960s animated Spider-Man, who really doesn’t like being pointed at.

Still, there’s more to it. Alchemax, the organization from Spider-Man 2099’s origin, is involved in the present day. It’s the company where Olivia Octavius works, funded by Wilson Fisk. It’s where Gwen Stacy snoops around undercover.

More importantly, the spider that bit Miles appears to have something to do with Miguel’s reality. The spider is from Alchemax, but it’s also colored like Spider-Man 2099 and glitches like it doesn’t belong. Everything points to that spider coming from Spider-Man 2099’s world. Was it something Miguel did? Possibly.

It’s also possible that when the original Spider-Man stuck his head in that super-collider, it sucked in that spider in an attempt to grab Miguel. According to the movie’s internal logic, the super-collider tends to play around with time when it comes to dragging people in. Hence Gwen laying low prior to the super-collider’s activation.

Speaking of Gwen, check out her wrist in the teaser for Spider-Man: Across the Spider-Verse. She has one of those little wrist goobers from the post-credits scene. Dollars to donuts say that Miguel recruited her for some mission and in turn, she’s recruiting Miles.

Every now and then, Marvel is able to create an alternate reality that is successful enough to get its own comic line. Once that line runs its course, it’s interesting to see what the people at Marvel hold on to as valuable. With Marvel 2099, at the end of the day, only Spider-Man 2099 is remotely relevant. Sure, Doom 2099 had his moments and Punisher 2099 is hilarious in how over-the-top he is, but this alternate future started as Spider-Man’s domain and remains Spider-Man’s domain.

Miles Morales isn’t too far off. The Ultimate Marvel imprint lasted a good fifteen years and gave us some quality stories and comic runs. The Marvel Cinematic Universe’s take on Nick Fury and the Avengers (especially Hawkeye) owes a lot to Ultimates and its sequels. But when it came time to retire the universe, at least for a while, with 2015’s Secret Wars, Marvel was very blatant about what was valuable. That’s why Brian Michael Bendis’ experiment of killing Ultimate Peter Parker and replacing him with a new character paid off with the mainstream Marvel universe rebooting itself so that Miles Morales and his family exist.

Ultimate Reed Richards is also a thing, but that’s a discussion for another day.

With Spider-Man 2099 and Ultimate Spider-Man 2.0 being the big survivors of old universes, one has to wonder if Mayday Parker, AKA Spider-Girl, is going to show up in Spider-Man: Across the Spider-Verse to fulfill the trifecta. Born out of a What If…? issue, Spider-Girl jumpstarted her own alternate future line, MC2, and starred in over 100 issues of comics. Who knows? She might be the payoff to Peter B. Parker accepting that he and Mary Jane should have kids.

The Walking Dead: How the Rick Grimes Movie Became a TV Show
The Internet Still Hates Chris Pratt as Mario in the New Trailer
Sci-Fi Short Film “The Collector” | DUST
WoW Dragonflight: Every Class Ranked Best to Worst
The Most Underrated and Overlooked Games of 2022