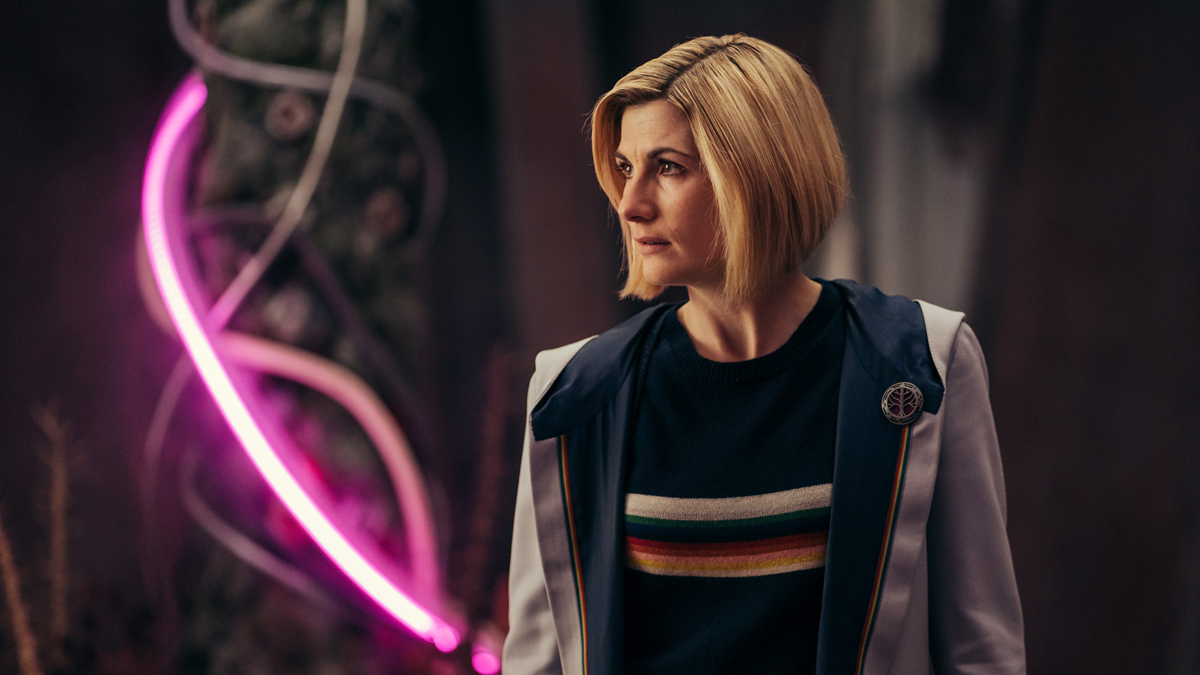 Several regenerations and over a decade ago, more than ten million people sat down to watch ‘Journey’s End’, which at the time was intended to be Russell T. Davies’ last regular episode of Doctor Who before a handful of seasonal specials ended his tenure as showrunner. The extra-long finale saw a huge ensemble cast from the show’s history facing the ‘Reality Bomb’, a wave of energy that would wipe out absolutely everything. Fortunately, due to some last-minute technobabble, we effectively had three Doctors working in tandem to stop it, with the added advantage that one was also the magnificent Donna Noble.

As time and circumstance place Chris Chibnall in a similar situation, it’s no surprise that he might look to the past for some inspiration. But while ‘Journey’s End’ was criticised by some for wrapping everything up too neatly (and, lest we forget, there was a serious amount of eye-rolling at the Tenth Doctor TARDIS-towing the Earth through the time vortex), the issue with ‘The Vanquishers’ is how much has been left unexplained or, in the case of the apocalypse the story is built around, outright ignored.

There’s a touch of Star Trek: The Next Generation finale ‘All Good Things’ at first, as Thirteen finds her consciousness dragged between different times and places. Once her ‘trisected’ selves board the TARDIS, however, we start to get plenty of nods towards the events of ‘The Three Doctors’ – as in that story, the main threat comes from antimatter, there’s a use of “Contact!”, and one of the Doctors is trapped in a bubble outside the universe.

With the Doctor flitting so rapidly between various time periods in this episode it would be downright exhausting to try and follow the narrative along and examine it as it plays out – some individual ‘scenes’ near the start are just a few words long before the Doctor’s off to another location. Probably best, then, to examine each of the many threads that have been jostling to be the main plot and look at how deftly they’re concluded.

Let’s start with the revenge of the Sontarans, a surprising return for villains that appeared to have had their time in the spotlight this year. This is really their episode, as they set out to become the titular ‘Vanquishers’ with a rather dastardly plot to wipe out the species that pose them the biggest threat. Despite their claim, they’re not really here to invade the Earth – rather, they want to commandeer the Lupari shield-fleet and use it to survive the second Flux, betraying the Daleks and Cybermen at the last minute and effectively chucking them head-first into the wave.

If that had been the entirety of their plan, it would still have been some solid Sontaran strategy, but we’re not done yet. The Dalek and Cyberman armadas, we are told, will offer enough raw matter to cancel out the newly-formed Flux before it gets going, leaving the Sontarans as the dominant force in the universe. Conceptually, this is great – it’s the sort of all-or-nothing military madness we’re frequently told makes the Sontarans so fearsome but have rarely gotten to see. The problem here is not with the scheme, it’s with the Doctor’s response to it.

Once she realises what’s going on, Thirteen’s contribution is to make things even more genocidal – she doesn’t decide to warn the Daleks and the Cybermen, she just wants to chuck the Sontarans into the Flux for good measure. This is the same Doctor who, back in ‘Journey’s End’, offered a hand of friendship to save Davros even after his spirited attempts to wipe out reality. Even with the universe at stake, this feels like the kind of cold calculation that would have gotten a companion kicked out of the TARDIS, not Plan A stemming from the Doctor herself.

That said, when the plan fails to completely obliterate the Flux, Plan B comes not from the Doctor but from Diane, whose time trapped in a Passenger has given her some seriously deep knowledge of their inner workings – enough to impress even Vinder, who supposedly trained to fight them. It’s Diane’s idea to suck the rest of the antimatter into a Passenger, where it will be neutralised by the virtually limitless landscapes inside.

Although it’s a bit disconcerting to see Diane suddenly this well-informed when we’ve not spent any time watching her figure this stuff out, the use of a Passenger is a smart bit of storytelling so long as we buy into them being something like a TARDIS. (Doctor Who has a long history with prisons that are bigger on the inside…) They’ve been constantly seeded throughout much of Flux, we just haven’t been paying that much attention to them.

Bel and Vinder’s reunion is sweet enough, and teaming them up to go making mischief with Karvanista is the kind of pairing that, were Chibnall not halfway out the door with his coat on, one could easily imagine as an upcoming spin-off. (Are you there, Big Finish?) Diane is far cooler towards Dan, but given the trauma she’s been through as a result of their mere association, that’s understandable. And there’s poor Professor Jericho, of course. If anyone wasn’t going to make it through this in one piece it was always going to be the old soldier with a haunted past, although his death comes down more to bad luck than a heroic sacrifice.

When they’re not busy scoffing off-brand chocolate bars, the Sontarans are being helped along by the Grand Serpent, who seems to have been partly responsible for the whole scheme but now takes on the role of a low-level torturer and flunky. His is a very different kind of evil to the Sontarans, which makes him slightly more suited to interrogate the Doctor, but he’s a bit wasted, really. The idea that he doesn’t even remember Vinder is interesting in a “for me, it was Tuesday” kind of way, but he gets dumped on a space rock so soon after his long-awaited reunion with Kate, it was barely worth him turning up for work. Perhaps, like Tim Shaw, he’s being saved for a future return?

If we’re talking about underused villains, though, the gold stars this week must surely go to Swarm and Azure. They’ve spent the entire run waxing lyrical about all the many ways they’re going to make playthings of the cosmos, and that rhetoric gets dialled up to 11 this week. They’ll rip the universe apart for all eternity, turn the Doctor’s memories to dust as she feels every agonising moment, take a bite out of her ice-cream cone and throw the rest on the floor, leave greasy fingerprints all over her phone…

The scope of the depravity the Ravagers are proposing to inflict upon the Doctor is so massive as to be meaningless, and obviously none of it amounts to anything. Even the Doctor seems to regard their threats as more of an inconvenience now that she has a plan to stop the Flux, and Swarm and Azure are extinguished soon after by the manifestation of Time, who decides to tease the Doctor and the audience with the plot arc of next year’s specials. (What’s that you say, Time? The Master’s coming back in some specials and this time the Doctor might not regenerate?! Funny, I could swear I’ve heard that before…)

The most significant story arc, of course, has to be the aftermath of the Flux event itself – it’s what gave this series its name, after all. The first half of the storyline went to great pains to point out that the universe was battered and broken by the Flux, with entire civilisations displaced and interstellar war breaking out – and on top of it all, time anomalies and other cosmic horrors thanks to damage sustained at the Temple of Atropos. Even with the Mouri restored, events witnessed through Bel’s eyes showed us that the Doctor’s warning of new threats to Earth in a post-Flux reality were not to be taken lightly. Some viewers believed that the damage from the Flux would be reset or repaired this week, others pondered if the fallout would persist into Jodie Whittaker’s final year as the Doctor.

Instead, the state of the universe seems to have been swept under the rug now that the story’s over. Certainly nobody’s mourning the loss of trillions of lives out there, nor does the Doctor look like she’s going to be trying to undo the damage given Yaz’s cheerful declaration that they’ve “no idea” where they’re going next. It’s maddening to think that either Chris Chibnall has no intention of addressing the aftermath of his own creation, or that he does plan to but has mistakenly given us the impression that we shouldn’t continue to care.

As ever, there are some other dangling plot threads that might make a return one day – most notably the ship / headquarters of Division, which is presumably still barrelling towards another universe with a single Ood trapped aboard. We also never got to see the moment from Dan’s timestream where he was back-to-back with Williamson in the tunnels, under attack from an unseen threat, though that feels more like a moment that was cut for time rather than seeding a future story. It’s clear from the hasty editing and the sheer number of lines delivered off-camera that ‘The Vanquishers’ underwent a lot of last-minute script changes, so it’s entirely possible this was a Sontaran scene that never made the cut.

On its own merits, ‘The Vanquishers’ is by no means a tidy ending, but it’s an ending nonetheless. Everyone gets at least one moment to shine, whether it’s Yaz frying Sontarans with a door full of death rays, Karvanista’s revenge on Commander Stenck or Bel gleefully bludgeoning her way through a spaceship with a metal bar. Jodie Whittaker had a huge amount to do this week, but her best moments are when she gets to breathe a little in scenes with Yaz, Azure and the Grand Serpent.

What, then, to make of Doctor Who: Flux? It’s a run that contains some of Chris Chibnall’s strongest episodes, but also one that shows a total disdain for picking up after itself. At times it feels like being on a roller-coaster – you’re supposed to enjoy the ride as you’re hurled this way and that, but once the journey is over, you’re not meant to brood over what you just experienced. And, in fairness, that’s precisely how most of Doctor Who’s audience will react: they’ll watch it once, they’ll laugh at the bit about Sontarans eating sweets and then, as soon as the credits roll, they’ll put something else on.

Me? I’ll still be sat here, livid, if Dan doesn’t get his Mum a replacement wok for Christmas.

Doctor Who returns with New Year’s Day Special ‘Eve of the Daleks’ on January 1st on BBC One, BBC iPlayer and BBC America