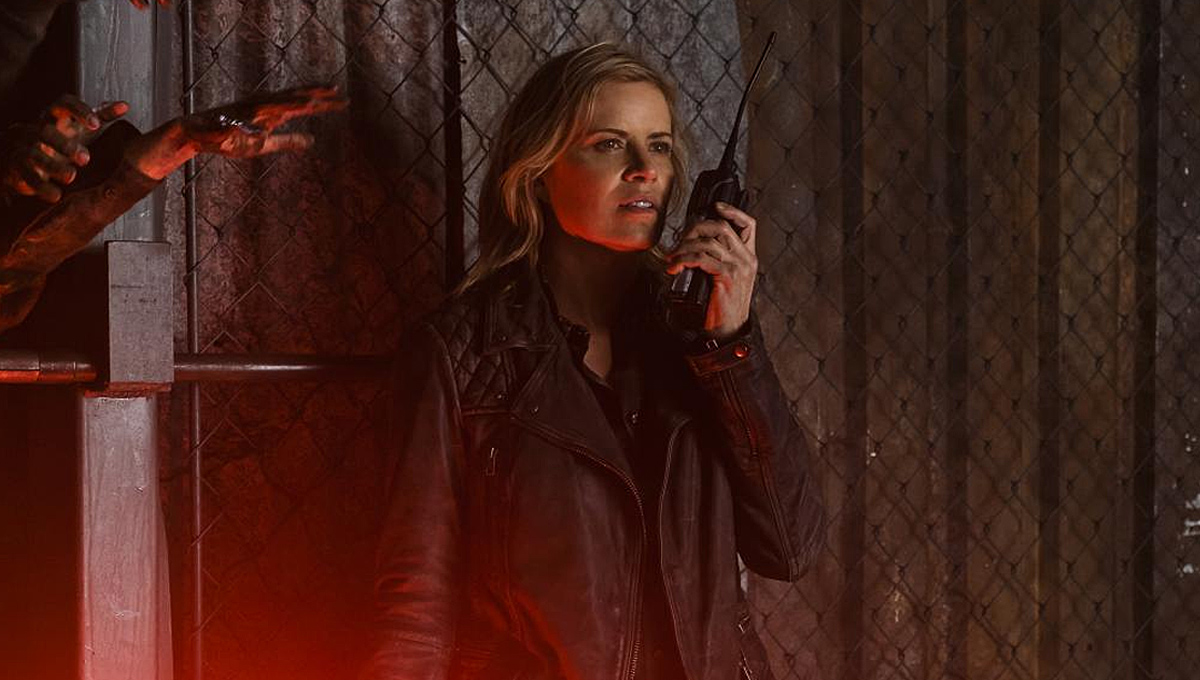 Fear the Walking Dead will soon grant a major wish fulfillment moment for its fans, having officially set the return of Kim Dickens as the show’s maternal demolisher of the dead, Madison Clark. Thus, a surreal reunion is imminent for Season 7B of a series that is nigh-unrecognizable from the era of the character’s controversially-ambiguous Season 4 exit. Interestingly, the plan was set way back in January, requiring Dickens to keep a stupendous secret for nearly a year.

Coming off Sunday’s airing of Fear the Walking Dead’s 7A midseason finale, AMC’s long-running post-show, Talking Dead, paid tribute to concluded spinoff The Walking Dead: World Beyond, and touted a mystery guest, who turned out to be a remote-appearing Kim Dickens. However, the former Fear headliner wasn’t there to reminisce about her starring run, and came right out with the announcement for which fans have been waiting for three-and-half years, stating “Madison is back.” Further avoiding any ambiguity over the imminent reprisal of her presumed-deceased character, Dickens declared “We can confirm it, she’s alive.” While the move might be perceived as an impulsive stunt on the part of the showrunners, Dickens reveals she’s been keeping the secret for a year.

“I’ve had the secret, I think probably since this whole year. The end of the last year, I get a text from Colman [Victor Strand actor Colman Domingo], who was on set, and it said ‘Girl, you need to call me.’ So, I called him, and he was on set, and I said ‘Why, what’s going on?’ and he goes ‘Someone was asking about you on set,’ and I was like, ‘Why are they asking about me?’ So, it turns out they were trying to gauge my temperature and sort of availability for a conversation with them, and I said ‘absolutely.’”

Fortunately, the eventual January 2021 reconciliation attempt with Dickens made by showrunners Ian Goldberg and Andrew Chambliss, and franchise chief content officer Scott M. Gimple, was quite clearly successful in a major way. Dickens is not only set to make her awaited role reprisal as Madison in the April-scheduled Season 7B, but she will reportedly return in her capacity as a series regular in the now-confirmed Fear the Walking Dead Season 8. “So, we all talked, Ian, Andrew, Scott and I Zoomed [in] early-January,” recalls Dickens. “They gave me their pitch and I was more excited than I even imagined I would be.” Additionally, any potential incredulity over the return being a flashback-type swerve was dispelled in advance, with Goldberg (who was also on the Talking Dead dais,) clearly confirming, “She’s 100% back! I will not be coy here.”

The soft approach was necessary, since Dickens’s Madison, who had been Fear the Walking Dead’s de facto protagonist since its 2015 inception, would become a defining casualty of a showrunner regime change that saw Chambliss and Goldberg take over from departed co-creator Dave Erickson starting with 2018’s Season 4. The duo immediately put their creative handprint firmly in the continuity cement by depicting the apparent demise of its main character in Season 4’s midseason finale, “No One’s Gone.” The move was obviously controversial from a storyline standpoint, and the abrupt pink slip caught Dickens off-guard. Indeed, an exit interview with EW published immediately upon the episode’s June 10, 2018 airing had her clearly lamenting the involuntary exit.

“I also thought there was so many more stories to tell and so many more places to go, so I was initially shocked and disappointed and heartbroken,” said Dickens in the 2018 interview. “But you know, it’s in the hands of the writers and the producers, and that’s the fate that befalls so many of the characters in this genre. Basically, the message is, no one’s safe. And these kinds of deaths will ultimately propel the story of the other characters into other places. It’s part of the genre, it’s part of the storytelling device, and I just have to wrap my head around it and go into production.”

However, the frantic, fiery fate that Madison was dealt advantageously left things open to interpretation. It was depicted as a noble, sacrificial end when she led an invading thousands-strong herd of walkers into the main group’s makeshift baseball stadium stronghold, and subsequently ignited a blaze that engulfed the colossal carnivorous horde, and, with no apparent avenue of escape, seemingly leaving her to burn. While the death was never confirmed onscreen, showrunners Chambliss and Goldberg initially treated the idea as gospel. However, their language on the matter started to contain a conspicuous amount of ambiguity in the ensuing years. This was especially the case, seeing as Madison’s “death” came to embody the divisive aspects of their tenure, which transformed what was once a stripped-down tale of a family’s survival in Los Angeles during the onset of the undead apocalypse to its current state—headlined by Lennie James’s The Walking Dead-imported Morgan Jones—of ostentatious Texas tribal warfare in the irradiated aftermath of a cult leader’s detonation of a nuclear device.

Speculation over Madison’s return reached a fever pitch around this time last year when Season 6 showcased an ongoing mystery centered on the unseen figure who rescued a gun-shot Morgan from certain death, which incited ultimately-apocryphal theories of it being her. Consequently, the showrunners who once fired Dickens found themselves getting back in touch with proverbial hats in hand about facilitating a series-redefining return. Remarkably, Goldberg now qualifies Madison’s false death as “the end of one chapter” in her arc, one that he claims was always destined to continue, further stating, “It was about aligning the stars and making sure it was the right story and the right time to honor the character to bring her back in a way that was surprising and new and exciting and we found the moment and honestly could not be more excited to have Kim back.”

Regardless, Fear the Walking Dead is now set for a potentially-heartbreaking reunion with the show’s veteran characters, since the last surviving member of her family, daughter Alicia (Alycia Debnam-Carey), has since experienced a plethora of life-changing events, notably the death of brother Nick (Frank Dillane)—a post-stadium tragedy of which Madison might not yet be aware. Moreover, recent developments have seen Alicia take leadership of her own group—remnant members of the cult whose leader detonated the bomb—and sustain a walker bite that required amputation of her left arm below the elbow. However, despite surviving, she remains visibly ill as her body continues to fight the infection, leaving her status for the near future—like, say, for a mother-daughter reunion—in jeopardy. This occurs while Victor Strand a character that was once close—almost romantically—to Madison has become a nihilistic post-apocalyptic despot, waging a tribal war against Alicia and her allies. Thus, while we don’t yet know how Madison will make her return, it will certainly facilitate some exciting moments, especially for longtime viewers.

“I was able to tune in on Season 7 and I just think it’s gone epic beyond epic,” lauds Dickens of the show’s evolution. “It’s incredible to watch, it’s like visually stunning, and the work that everyone’s doing is so exciting and impressive. I watched it and I was like, ‘Well, that looks like a show I’d really like to be on.’ So, it’s going to be fun to go back and work with all the new characters and find out what’s happened. I’m a little nervous about that war between two of my favorites.”

Should Marvel Change MCU Strategy on Disney+?
Why One of Star Trek: The Next Generation’s Worst Episodes Is Still Worth Watching
James Gunn’s Plan for DC Video Games Sounds Awfully Convoluted
Forspoken Is That Frustrating Piece of Entertainment That Gets Good “Eventually”
New Batman and Robin Movie, Green Lantern TV Show, and More Announced for Revamped DCU