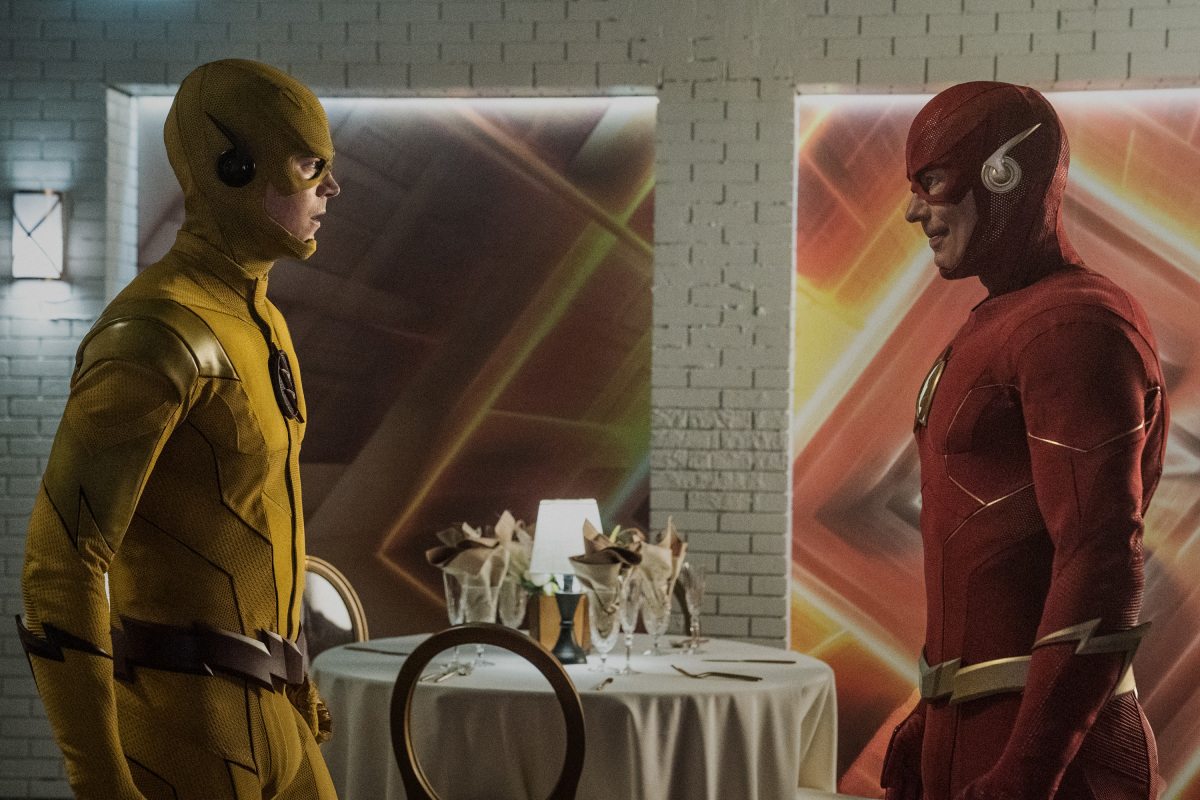 Almost anyone who has watched The Flash for any length of time knows there really three certain things in life: Death, taxes, and the Reverse Flash. By far the most iconic of Barry Allen’s foes, Eobard Thawne is guaranteed to turn up every few seasons like clockwork, in an attempt to kill The Flash, steal his speed, or just generally ruin his life.

The danger, of course, lies in the risk of repeated Reverse Flash appearances becoming stale or boring, even repetitive at certain points. In the past, The Flash has struggled with what to do with multiple versions of the character of Harrison Wells and has had a bad habit of relying on Thawne as a solution to many narrative problems.

“It’s a funny thing,” actor Tom Cavanagh, who plays Eobard Thawne, tells Den of Geek. “There are cards you want to play, but you don’t want to overdo it. And Flash and Reverse Flash is definitely one of those things, as far as I’m concerned. But The Flash is such a light, and you can’t have a light without a dark to put it in.”

Thankfully, The Flash: Armageddon is one of the fan-favorite villain’s most exciting and entertaining returns to date, culminating in a trip to a wildly reimagined version of 2031, in which Thawne is about to marry Iris, all Barry’s friends have abandoned him, and he himself has somehow become the Reverse Flash (complete with a yellow suit of his own).

“I felt like this was a real joy of a storyline for us – for both Grant and I – to get to play,” Cavanagh says. “It doesn’t feel gimmicky. It feels earned. And this seems like the right time and the right moment to tell this story. And moreover, like an ace in a poker hand that should get played, for people who have spent the time with us that they have spent, you want to keep delivering to that audience. And this feels like a really solid delivery.”

From trying to marry Barry’s wife to literally stealing his superhero identity, the Reverse Flash is truly on the top of his supervillain game. And, to Cavanagh, this all just represents a natural next step in their seemingly endless rivalry.

“It’s so great,” Cavanagh says with a laugh when asked about putting on the iconic red Flash suit for the first time. “Grant and I have talked about this a lot – we’re such good friends and we know each other so well. And so it sort of feels like him putting on a yellow suit and me putting on a red suit is a big bowl of well, of course. Yes, that. How have we not done that before? And what’s interesting is that it happens in the canon, but Eric [Wallace, The Flash showrunner] and the writing team pulled it out of the bag at what really feels like the right time.”

Though The Flash: Armageddon is labeled and marketed as a five-part “event,” its stakes seem as high as any of the series’ larger crossover events. (Potential end of the world: Check. Iris in possibly mortal peril: Check.) Yet, the story has remained firmly grounded in and focused on the world of The Flash. For all that heroes from multiple other DC TV series past and present appear – and Batwoman viewers who are also “Wildmoore” shippers are likely going to have some feelings after this episode – this is still a story about Barry Allen and one which is steeped in this particular show’s history rather than the Arrowverse writ large.

“It just feels like a good story,” Cavanagh says. “That’s the best way of putting it. It doesn’t feel gimmicky or like, hey, look at this big event. It’s good in the way that The Flash 100th episode was good. When I directed the one-hundredth episode, we didn’t bring in a thousand people, [we] pared it down: Simple, small, clean stories that [feel like they] matter.”

At the end of the day, for all that Armageddon is a specific “event,” it’s still the same battle between good and evil that has always been at the heart of this show.

“This story is just Flash versus Reverse Flash,” he says. “I know we have like Armageddon in capital letters, but in many ways, we benefit from them paring down the story to its simplest forms here too. It’s good versus evil in a very clean and clear way. I think the show benefits from it.”

For Cavanagh, it’s the threat to the West-Allen family, the idea that Thawne might not kill Barry, but instead take away the things that matter most to him, that makes the story work.

“Iris, the question of family, I think it adds a lovely element to it,” Cavanagh says. “Like people can watch Reverse Flash get defeated or Flash get defeated however many times. But it’s a different thing I think when you introduce the Iris/Flash/Reverse Flash of it all. Heroes survive and you can always tell those stories. But when you put the family in jeopardy, you’ve invested [the story] with a whole lot more [tension], and it becomes that much more meaningful to the audience.”

Despite the fact that, by the end of “Armageddon, Pt. 4,” the timeline has been set to rights and it looks as though Barry has once again won, the Reverse Flash still has another trick up his sleeve, ending the episode by appearing in 2021 and launching yet another evil plan. (This time apparently involving Gideon?)

But no matter how many times the Reverse Flash is defeated, he always seems to bounce back, still eager to take yet another shot at defeating his archnemesis. According to Cavanagh, it isn’t so much about winning or losing for Thawne, simply that he “delights in being part of the game.” And it sounds like the same might just apply to the man that portrays him.

“The Reverse-Flash, for me, is the raison d’etre,” Cavanagh says. “There’s only so many iconic super villains in the comic book world and I feel like Reverse-Flash is one of those. And if you get a chance to play a character [like that] and there are more stories to tell in that arena – well, you want to be there to tell those stories. I consider it a privilege.”

And however The Flash: Armageddon ends next week, it certainly seems like this is hardly the last time we’ll see Cavanagh – or Thawne – in Central City.

“I think we’re all well aware that there’s got to be dark days ahead for these stories to really work,” Cavanagh says. “And I don’t know if there’s anything darker than Eobard Thawne in our universe. So maybe that’s a roundabout teaser of what’s to come.”