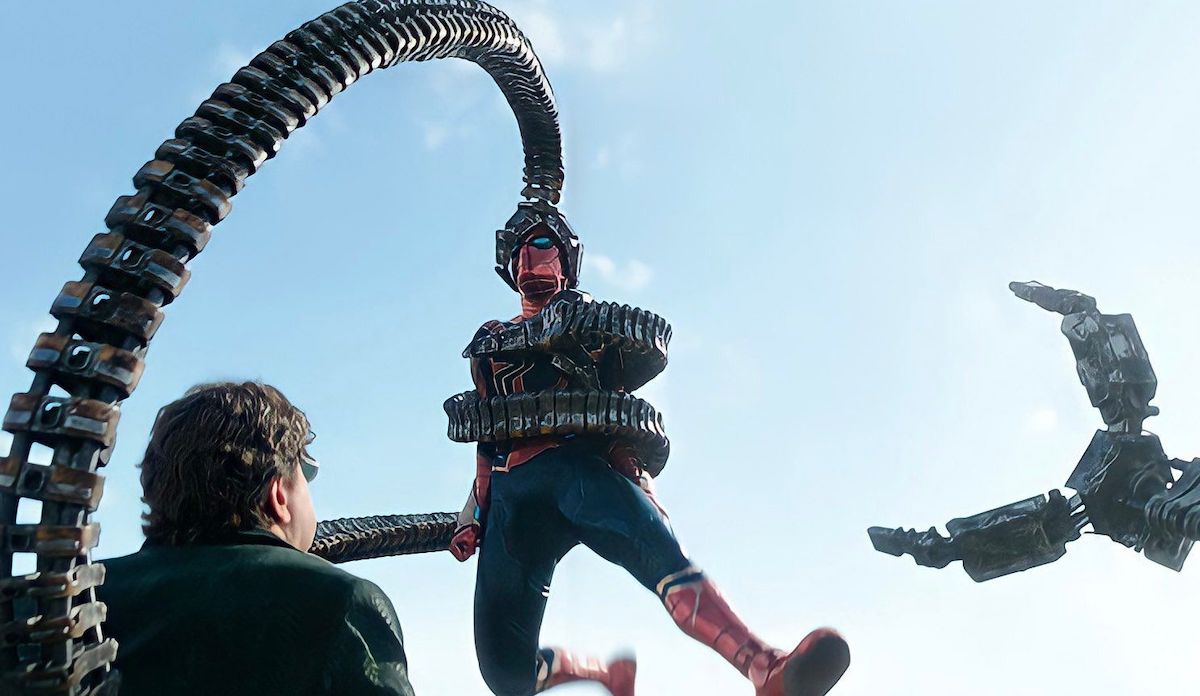 Stars Tom Holland, Zendaya, and Jacob Batalon grew up with the Sam Raimi Spider-Man movies. How could they not? Each actor was at the perfect age of either five or six when the 2002 Spidey movie came out—a game-changing event which featured Tobey Maguire as Peter Parker and Willem Dafoe as the Green Goblin. And the future No Way Home actors were only a few years older when Alfred Molina made his debut as the dastardly Doctor Octopus in Spider-Man 2 in 2004.

Now, in a still impossible-seeming trick of blockbuster origami, the trio of leads who came of age while leading their own Spider-Man trilogy in the Marvel Cinematic Universe (MCU) are getting to work opposite Dafoe and Molina in Spider-Man: No Way Home (as confirmed via multiple trailers and other recent promos). And in their own way, they’re getting to go back in time while honoring what the Raimi films did.

Holland says as much when we talk with him about Spider-Man: No Way Home and returning to Raimi’s legacy in 2021. As the Peter Parker of today tells it, director Jon Watts even emulated some of Raimi’s signature camera tricks, bringing a taste of that bonkers filmmaking which turned the original Spider-Man trilogy into a visually wild and innovative rollercoaster.

“I think what Jon Watts did really well is [what] he would call the ‘Raimi Cam,’” Holland explains. “And he would do these really quick, smash push-ins on characters, which is something Sam Raimi, I suppose, was quite famous for. So Jon definitely paid respect to the previous two movies.”

Indeed, a genre director by trade before transitioning to Hollywood dramas and (eventually) superhero blockbusters, Raimi cut his teeth on groovy horror flicks like the Evil Dead trilogy. What those movies lacked in budget they made up for with copious amounts of style, drawing attention to canted camera angles and aggressive, swooshing movements. Raimi brought the same gonzo energy to many a Spider-Man scene in the 2000s too. The sequence where Molina’s Doc Ock slaughters a room full of surgeons is a particular showcase for gleeful cinematic carnage being unleashed in the typically squeaky clean realm of superhero movies.

Holland also tells us that working with Molina and others from the original movies presented a cool opportunity to compare notes about how things were done differently back then versus how Marvel Studios produces superhero movies now.

“There was quite a lot of [comparing notes], actually,” says Holland, “especially with Alfred, because I think back in the day his arms were puppeteered, and obviously in this film they’re completely CG. So I think it gave him a lot more creative freedom in the way that you can move around the set. It was really nice to see someone kind of adapt to the new way of filmmaking.”

Zendaya also basks in the thrill of working with Molina and Dafoe as colleagues after growing up with them in these very roles.

“It was crazy,” Zendaya says. “Unreal. In fact, there were days when Tom would ask us to come in, just as emotional support, because it’s a crazy thing.”

Holland likewise teases that he would have Zendaya and Batalon come to set on days they weren’t even in the scene, especially for a major sequence he’s not at liberty to describe.

“That one day that we can’t talk about,” Holland begins with a laugh, “when you guys came in. It made me feel very comfortable. It was like you were my cheerleaders.”

But why can he not talk about it? All Batalon says is “there were a lot of heavy-hitters for sure.”

Fans could presumably have fun speculating about what could be such an amazing moment that Holland would need moral support on-set. Or they can just wait patiently since Spider-Man: No Way Home is almost here, with the movie arriving in theaters on Friday, Dec. 17.

Actual footage of me on the search to find the Westworld ending we all deserve 🙃 #shorts #dust
SHAZAM! FURY OF THE GODS – Official Trailer 2
Other Space | Comedy Sci-Fi Series | Coming Soon to DUST on TV
How to Find a PS5 and Xbox Series X In 2023
The only way you’ll get me to run is if a Allosaurus is chasing me.🦖 #short #shorts #scifi