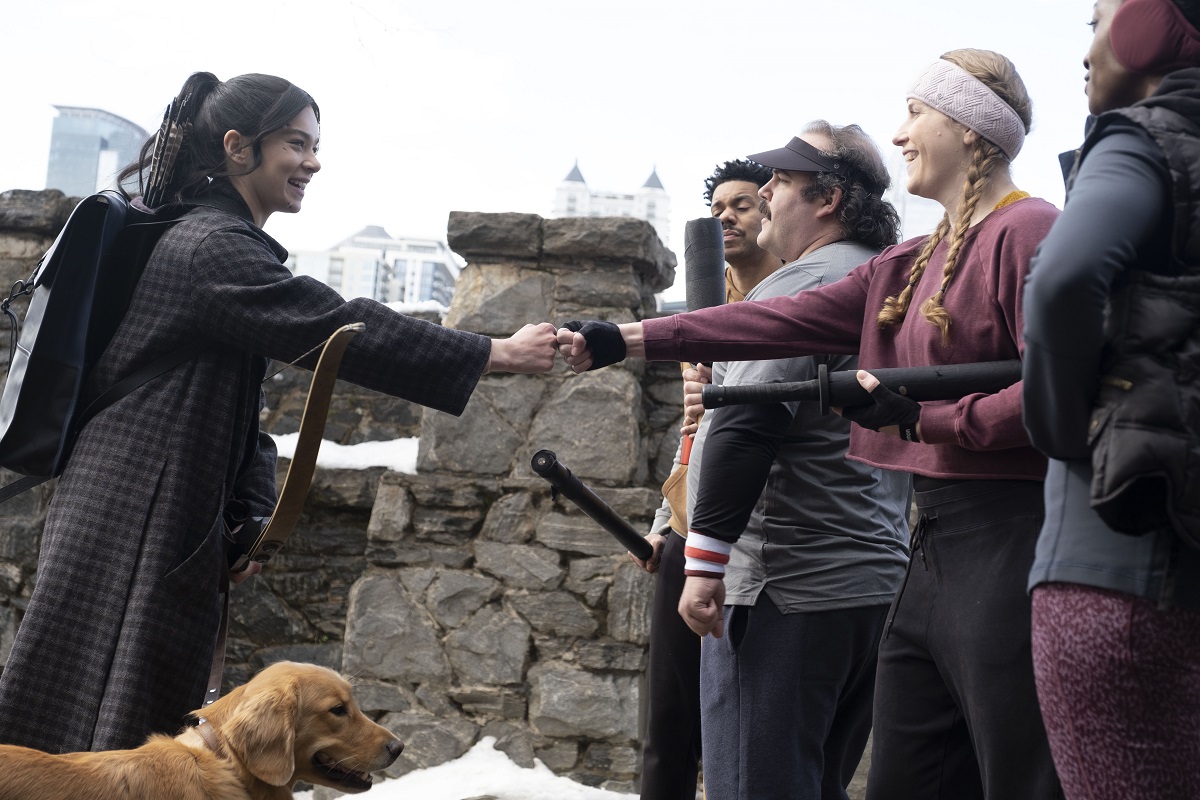 Hawkeye episode 4, which boasts the “say it in Kate Bishop’s voice” title of “Partners, Am I Right?” slows things down considerably from last week’s wild, chaotic, action-packed episode. This isn’t a bad thing at all. Not only does it give Clint and Kate a chance to catch their breath, it lets the audience take a look at some of the larger mysteries surrounding the show so far.

As a result, this episode is a little lighter on Marvel Comics and MCU Easter eggs than we’ve had in the first three, and some of them require a little bit more speculation than pure comics knowledge. It’s still a lot of fun, though, so here’s what we’ve found…

We have so many theories about who that watch might belong to that we had to write an entirely separate article about it, which you can read here. Let us know who you think it might belong to!

The LARPers continue to yield fun little Marvel Comics Easter eggs Officer Wendy Conrad has a bag embroidered with the word “Bombshell” on it. In the pages of Marvel Comics, Wendy Conrad is a very minor villain who first appeared in Hawkeye #3 back in 1983. We don’t expect Wendy, who seems like a very nice lady, to follow in the footsteps of her comics counterpart.

Kate’s really cool Laika sweatshirt is actually a direct lift of a t-shirt she wore in the comics. Artist David Aja designed that shirt based on the tragically iconic but pioneering space doggo, put it on Kate in the comics, and now here it is on the screen. Disney had better be sending Aja some checks is all I’m saying.

Kate is asking Clint about “boomerang arrows” in this episode. There were TONS of gimmick arrows last week, all deployed in a way that was almost exactly the way they were used in a particular issue of the Matt Fraction/David Aja Hawkeye comics. Here, this is another case of Hawkeye the TV show flipping the events of the comics from Kate to Clint slightly. On the page, the boomerang arrow exists, and Kate is skeptical of why it would ever be useful, while here, she’s suggesting it and Clint is shooting her down.

Clint’s dangerous little coin trick is ALSO from the Matt Fraction/David Aja comics, by the way. And it’s something he’s been practicing since he was a kid. Something tells us this is gonna come in handy before this season wraps up.

As always, if you spot anything we missed, let us know in the comments!