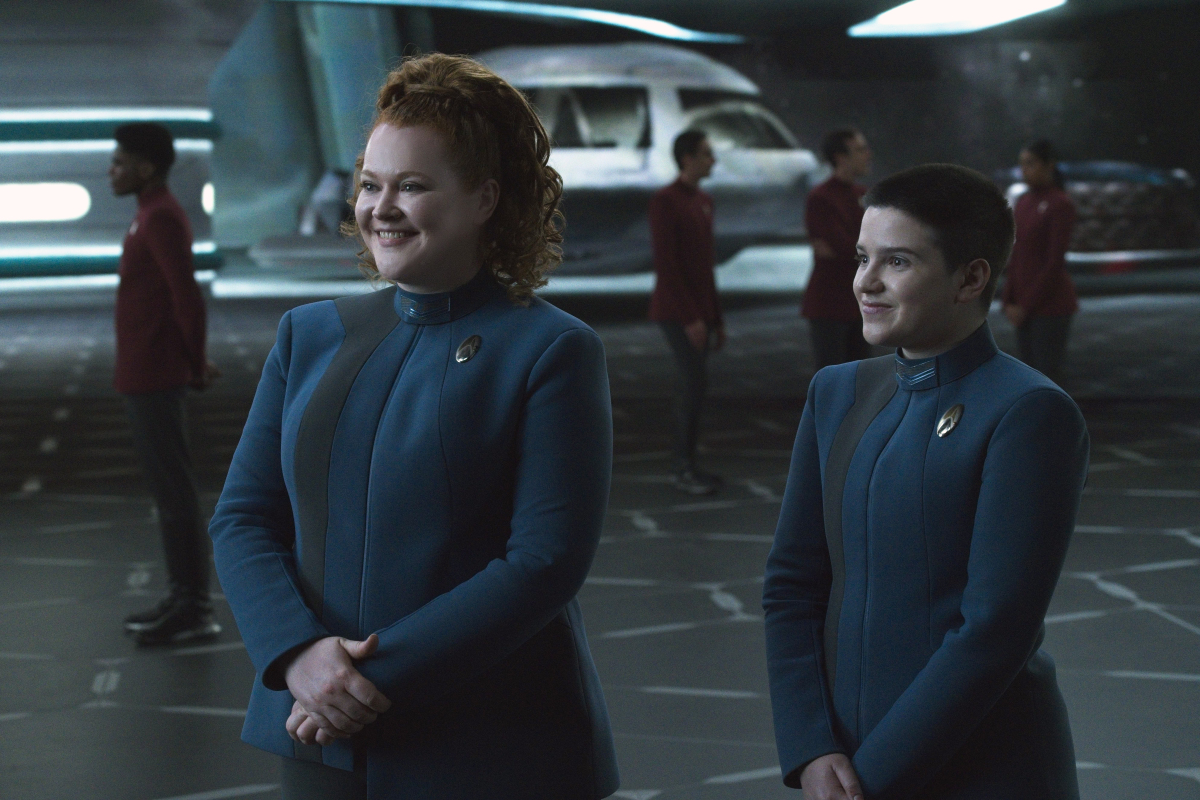 It’s not yet clear whether “All is Possible ” will really be Sylvia Tilly’s goodbye on Star Trek Discovery, especially since the episode makes such a strong case for the necessity of her perspective and worldview. In many ways, her character is a kind of personification of what makes Star Trek as a concept so appealing, just a big-hearted, open embrace of possibility along with a nerdy love of science and seemingly boundless faith in the innate goodness of others. The idea of the Discovery without her – and the show without the talents of Mary Wiseman – is legitimately upsetting and, quite frankly, just feels wrong.

Yet, Discovery has been remarkably honest about Tilly’s struggles to adjust ever since the crew arrived in the 32nd century and her recent elevation to lieutenant has revealed how deeply unhappy she truly is, reflecting a realistic tension many striving overachievers often encounter when they finally reach a goal and discover it wasn’t precisely what they thought it would be. It’s scary to get what you want – or thought you wanted – and discover it actually makes you miserable. And there’s something brave about showing us someone stepping back for their own good, choosing their own happiness over chasing professional accolades they’re not sure they want anymore. (Maybe it’s just me, but the idea of reevaluating what work means and how it fits into your life  in the aftermath of a traumatic event feels like it hits differently these days.)

But if this is to be an end, of sorts, for Tilly, then she at least got a great episode to go out on. “All is Possible” feels like Star Trek: Discovery firing on all cylinders, easily balancing multiple moving plots, several solid character moments, and the rise of my new favorite onscreen duo in Mr. Saru and Ni’Varan President T’Rina. (Please give them lots of reasons to have more deep chats about politics and meditation techniques in the future, show!)

The episode actually explores some of the unique tensions prevalent in a world that survived The Burn but doesn’t remember what life was like before it, when the universe was more open and integrated than it is now. And even though this is the second episode in a row without a Grudge appearance (!!). Discovery continues its surprisingly deft attempt to weave Book more fully into the world of the show beyond his relationship with Michael. (Which turns out to be good for Hugh Culber too, who has also found himself fairly isolated on this canvas in recent seasons That’s another budding friendship I’m very interested in seeing more of.)

Tilly’s Starfleet Academy training mission certainly has hints of Star Trek: The Original Series episode “The Galileo Seven,” in which a group of Enterprise crew members unexpectedly crash land a shuttlecraft while on a reconnaissance mission. Tilly and her crew of cadets end up on an icy moon rather than an alien M class planet when their training simulation goes awry, but the bones of the story feel familiar enough. And, similarly, she, Adira, and a quartet of new recruits are all forced to learn to work together, whether they like it or not.

As adventures go, it’s pretty compelling TV (and pure Star Trek down to the ground), allowing the cadets to find mutual respect as well as recognize and learn to combat the innate biases they’ve all been raised with. (This episode is also the most I have ever liked Adira, just saying, and I think that has something to do with the fact that it actually admits that while she may have access to much knowledge, she still has a lot to learn.)

Tilly is such a poster child for why Starfleet matters – and the good it can do in the world –  that on some levels her decision to become an instructor at the Academy makes perfect sense. She’s great with the entire team of cadets throughout this hour, and though she does occasionally come off as the most annoyingly cheerful camp counselor ever, there’s a nice bit of symmetry to the idea that even though this is where her time as a Discovery officer ends, she’ll still get the chance to share her love of the work, of what Starfleet stands for with a new generation. Hope is more important than ever in a world like this one, and if any Discovery character is primed to be that hope, it’s Tilly.

Plus, since Michael and basically the entire crew of the Discovery seem to be being groomed as politicians as much as they are being allowed to be explorers or scientists, there’s certainly bound to be plenty of opportunities for Tilly to see her old crewmates again. They’re spending as much time now at Federation HQ as they are out on missions, and that’s something that’s likely to increase further that Michael’s part of this consortium meant to oversee various reconstituted Federation relationships with other worlds. That isn’t necessarily a bad thing, either – there’s something kind of appealing about the idea of expanding Discovery’s canvas to include occasional storylines about the restoration of these key institutions that aim to put a fractured world back together again. (And any reason for us to see more of David Cronenberg’s Kovich and his giant glasses is a win in my book.)

Is it a bit painfully convenient that it’s Michael and Saru that come up with a conveniently simple compromise that allows both NiVar to rejoin the Federation and T’Rina to save face among the more hardline factions of her people? Absolutely. And one has to wonder why President Rillak keeps assigning Michael to these important, high-level tasks when she seems to have so little confidence in her beforehand? I mean, it’s Michael, so we all know she’s most probably going to pull whatever it is off, but Rillak’s insistence on her lack of fitness for various tasks would be more believable if she didn’t, you know, keep assigning her those tasks anyway.

That said, Discovery’s turn to the more thoughtful and overtly political – the necessity of difficult compromises, a populace that lacks faith in shaky institutions that haven’t served them in the past and don’t hold the same power or appeal as they did in the Discovery crew’s original time – is rather intriguing, especially if the show can find a way to balance the politics with the more entertaining science-based adventures that this season has proved so adept at telling thus far.