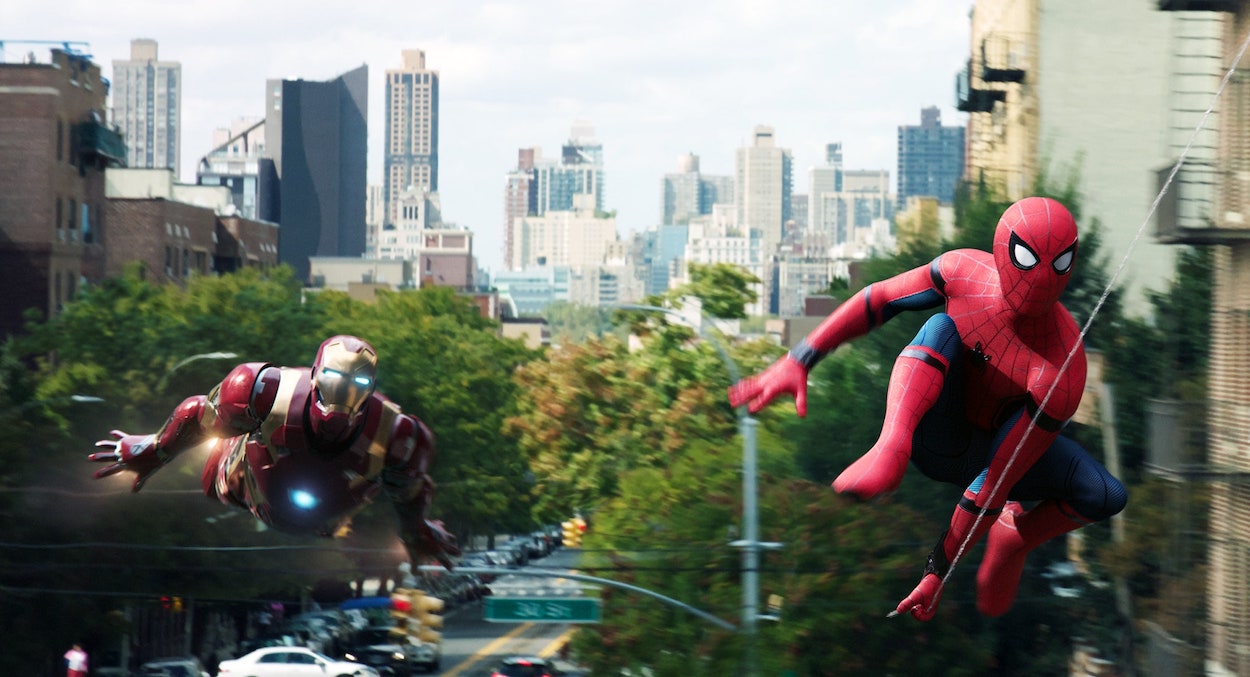 Peter Parker is a rebel. He’s a high-swinging, hard-kicking, red and blue smartass who never keeps his mouth shut. Spider-Man may have grown up learning the lessons of his dear Aunt May and Uncle Ben, but outside of those ostensible parents, he never has time for anyone over 30. He was the superhero idol of his age in the 1960s: a wiseguy who taunted all the squares that tried to make him respect their authority. Yet whether it was his best mate’s father, Norman Osborn, or Otto Octavius and his ridiculous bowl cut, those stiffs learned just how few webs he had to give.

It feels worthwhile remembering this aspect of the character nowadays. After all, the most popular modern image of Spider-Man—Tom Holland’s affable spaz in the Marvel Cinematic Universe—has largely abandoned this fundamental element of the comic book character in favor of becoming the MCU’s most happy-go-lucky hall monitor. While creative liberties in adaptations are always necessary and should be encouraged, it still feels like a vaguely missed opportunity that such a great performance has been tasked over the course of three films (or six when you count all the Avengers movies Holland has appeared in) with ostensibly playing Tony Stark’s sidekick.

It didn’t have to be this way. Arguably more so than any live-action actor before him, Holland seems to innately understand the character of Peter Parker. While Tobey Maguire captured the earnest side of Parker, and his genuine nobility which drives him to such unhappiness and misery, and Andrew Garfield at least keyed into the hopeless romantic who hides behind the mask, Holland brings a natural playfulness that was missing in those earlier big screen Spideys. Maguire by and large lacked the joy of being Spidey entirely, and Garfield misjudged it as a form of hostile arrogance. Holland’s Peter, meanwhile, loves being Spider-Man.

Even so, in the desire to differentiate this version from the Spider-Men who came before, Marvel Studios has also opted to slowly transform the essence of Peter’s personality. Gone is the nerdy kid from Queens with a chip on his shoulder; in his place is a glorified Avengers mascot—an overeager fanboy who, despite having already saved the world, still idolizes Robert Downey Jr.’s Tony Stark like a god and now gushingly refers to Benedict Cumberbatch’s Doctor Strange as “sir” in the new Spider-Man: No Way Home trailer.

After so many films, and the prospect of Peter apparently getting ready to go to college in No Way Home, it’s becoming somewhat tiring that Holland is still being forced to play the same beat as the kid who worships the system, and who will presumably soon inherit it as Tony Stark’s official successor. While Marvel has made billions by almost preternaturally knowing when to be faithful to the source material and when to update it for the screen, the fact remains they’re turning Peter Parker into something he never was in the comics, which is faintly baffling given this has been their greatest hero for almost 60 years.

As many folks’ understanding of the character is colored by the recent films, the distinction between the comic book version and MCU one is easy to lose. Yes, when Steve Ditko first drew Peter Parker in Amazing Fantasy #15, as well as the first 30-plus issues of The Amazing Spider-Man comic series, the character looked hopelessly uncool. He wore horn-rimmed glasses and sweater vests, for Pete’s sake! But that was of course part of the original power fantasy: loser by day, and winner by night (or at least after school). Parker grew up eating wheatcakes, but after getting bitten by a radioactive spider, he now was a nerd empowered.

When Holland’s first solo film, Spider-Man: Homecoming, was released in 2017, it seemed that director Jon Watts and the larger Marvel Studios braintrust understood this dynamic. Like pretty much every creative since John Romita Sr. took over drawing the character in 1966, they softened the misanthropy that Ditko’s visual storytelling instilled in the character. But Marvel still was savvy enough to put two Ramones songs over their first solo Spidey movie. The character is meant to embody youthful exuberance, including the naivety of youth to feel like they always know best. To folks like Adrian Toomes, he should come off as some sort of punk.

In that way, Homecoming and, to a lesser extent, the shoehorning in of Peter in the earlier Captain America: Civil War (2016) felt like a riff on The Amazing Spider-Man #1 (1963), Stan Lee and Ditko’s first Spider-Man comic book after the character’s origin story the year before. In this inaugural issue, Peter does idolize the original Marvel Comics universe’s coolest heroes—which back then were the Fantastic Four rather than Iron Man and the Avengers. In fact, this first issue is about Spidey trying to join Marvel’s First Family during America’s Camelot years.

And yet, if you go back and read the issue, there’s a prickly standoffishness to Peter that rubs paternal figures like Reed Richards and Ben Grimm the wrong way. This is by design, with the intent of creating a character who is a poor fit for adult-oriented teamwork. Hell, even the reason he tries to join the Fantastic Four is because he’s broke and thinks this is the quickest way to make a little extra bread.

“So now, let’s get down to business,” Peter enthuses in the comic panel you can read below. “How much does the job pay? I figure I’m worth your top salary!” The Fantastic Four respond by mocking him as having “rocks in his head” and hilariously thinking they’re General Motors. In so many words, they tell him to get lost.

Now, granted, Peter’s exceedingly capitalistic motivations in that comic, as well as his self-pitying whine after their rejection is a particularly selfish depiction of the character, and one of those aforementioned rough edges John Romita Sr. and Lee smoothed out when they retooled the template of Spider-Man comics to be a soap opera with fistfights. Nevertheless, Lee and Ditko were still trying to establish a fundamental element about the character that helped catapult him to becoming the most popular superhero in the world: He doesn’t play well with others and as an everyman is somewhat viewed as a schmuck from the outside perspective. That runs the gamut from how the press runs hatchet jobs on him, a la The Daily Bugle, as well as how even other heroes treat him.

While the characters Captain America, Iron Man, Thor, and Hulk were originally teamed up to raise the profile of all these characters in the Avengers comics—much like the films back in the early 2010s when they were still viewed as Marvel Comics’ B-team—Spidey was a bit of a loner. This made him more valuable to the Marvel Comics stable as he was Marvel’s closest answer to the traditional superhero setup of a Batman or Superman, but it also contrasted nicely with those paternal authority figures at DC, as well as Marvel’s own line of role models.

Peter Parker is the same age as “sidekick” characters like Robin, the Boy Wonder who idolizes Batman and does whatever he says, or Bucky, the human shield who idolized Captain America until he died. But when Lee lighted on the idea of Spidey? Here would be a character the age of many of Marvel Comics’ readers in the 1960s—teenagers—but instead of being the complacent and guileless sidekick, he’d be his own man (or a boy trying to be a man) with problems the readers could relate to: money, girls, school, and as the character aged, jobs and a career.

He’s the every kid who hung out with Mary Jane Watson, Gwen Stacy, and Harry Osborn at coffee shops discussing the Beatles more than he ever did the Avengers. When he teamed up with authority figures who might look at him as a presumable protege, the dynamic was usually awkward or even standoffish, with exception to the Human Torch in the Fantastic Four, who was the other most popular Marvel Comics teenage superhero character in the ‘60s.

Intriguingly, the comics didn’t toy with turning Peter into a team player or sidekick type until the 2000s, when the married Peter and MJ moved into Avengers Tower and Peter basically became Iron Man’s subordinate. Personally, I’d argue that was far more damaging to the character’s appeal than the then-20 year old marriage to MJ. Nonetheless, Marvel EIC Joe Quesada obsessed about those nuptials until he gutted them—partially through the heavily contrived and inexplicable choice of having Tony Stark convince Peter Parker to unmask himself on national television.

For what it’s worth, Marvel Studios and Watts can learn the easy lessons from Marvel Comics’ most boneheaded mistakes. They’re playing in the same sandbox Quesada did 15 years ago, but with much sharper writing, with the choice of having Mysterio reveal Peter’s identity to the world in Spider-Man: Far From Home to create the same dynamic. And whatever happens next in Spider-Man: No Way Home, it can be assumed it’ll be better than the train wreck of an idea to have Peter and MJ sell their marriage (or memory of their marriage) to the Devil, as occurred in the legendarily awful Spider-Man: One More Day storyline.

Be that as it may, Marvel still took the other awful tenet from those late 2000s comics and made it the backbone of their version of the character: Peter is not his own man. He is Tony’s sidekick, who despite his youth is only too happy to toe the line for a dead billionaire, as if he were auditioning to become a member of College Republicans when he gets to university. He’s even deferential to his villains like Jake Gyllenhaal’s Quentin Beck who is able to manipulate his desire to suck up to the older generation.

He’s not a rebel in the movies; he’s the equivalent of Robin on Super-Friends. The kid who’s just thrilled to be in the same room, sir, and thus makes his own identity subservient to the larger cinematic shared universe’s central conceit–which is to be fawningly enamored with all the brands.

It’s fascinating that in 20 years, we went from Tobey Maguire’s Spider-Man looking his idols in the eye—be it Willem Dafoe’s Norman or Alfred Molina’s Otto—and telling them what time it is, to a Web-Head who still hides behind his idols’ legs, or at least their billion-dollar drone satellite system and Starks Industries metal suits. In this way, even Jake Johnson’s Old Man Peter in Spider-Man: Into the Spider-Verse captures more of the comic book character’s shaggy individuality and youthful insolence.

Peter will always be more fun when he’s got the passion of youth, not the practicality of a company man.

Dave Bautista Has Talked to James Gunn About Future DC Movie Plans
Even More DC Shows Have Been Axed at HBO Max
Other Space | Comedy Sci-Fi Series | Coming Soon to DUST on TV
The Last of Us: How Long Does It Take to Beat the Games?
MCU Villain Redemption Arcs Ranked from Worst to Best