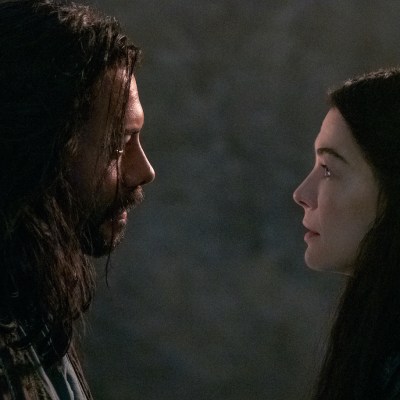 This article contains The Wheel of Time spoilers.

The Wheel of Time has plenty to enjoy for those who haven’t read the Robert Jordan novels upon which the show is based, but there has been no shortage of frustration on the part of “book purists” who are dissatisfied with some of the changes made by the television adaptation. Complaints of women being among the Dragon Reborn candidates, for example, may have primed more defensive viewers to question the latest narrative revision: the portrayal of Moiraine and Siuan as lovers.

But before the claims of “woke nonsense” come rolling in, hold on a moment. Although the late Robert Jordan never spelled out a romantic connection between the Amyrlin Seat and the esteemed Aes Sedai of the Blue Ajah, there were plenty of references to the pair being “pillow friends” as novices and beyond. While Jordan’s portrayal may have been colored somewhat by his own 1990s male perspective of what young secluded women might indulge in, he did clarify in a 2005 blog post that, “Pillow friends are not just good friends. Oh, they are that, too, but they also get hot and sweaty together and muss up the sheets something fierce.”

Moiraine and Siuan actually came to the White Tower at the same time, according to Jordan’s 2005 prequel novel New Spring, which focused mainly on the two young women new to the sisterhood. Although their intimate relationship was never explicit, there were frequent mentions of deep love and devotion as well as pleasant tickling. As mentioned in one passage when the two stayed in an inn together: “They were going to be sharing that bed, and Siuan knew exactly which ticklish spots could reduce her to helpless laughter and pleading.”

Jordan attributes the term “pillow friends” specifically to the White Tower, where the Aes Sedai’s magically extended lives made it difficult to love more short-lived men, and where the Warder bond was completely different from romantic love. “Between one-third and one-half of all Aes Sedai (possibly somewhat more) are either gay or (mainly) bisexual to one degree or another,” the author said in his notes on Aes Sedai. “This is in large part because relationships with men are exceedingly difficult: men age and die, [and] many men find a relationship with a woman so powerful difficult.”

Both Siuan and Moiraine did actually have relationships with men in The Wheel of Time novels, but the fact remains that their bond was particularly close. However, Moiraine would argue that it’s not a matter for discussion, even among her Aes Sedai peers. When an elder of hers spoke of intimacies in New Spring, Moiraine’s narration reads, “How close she and Siuan had been was no one’s business but theirs… There were things one talked about, and things one did not!”

So don’t get your knickers in a twist about The Wheel of Time choosing to extend the Moiraine-Siuan pillow friendship into adulthood. The truth is, it adds dimension to the other secret they share: that of finding and nurturing the Dragon Reborn among the residents of the Two Rivers who have reunited in Tar Valon. The contrast of their affection for each other with the cold manner in which Moiraine is exiled from the tower places the audience off balance while letting them in on a closely held secret. It’s a pleasant sort of discomfort… not unlike being tickled.

Thanks to The Thirteenth Depository for their careful research into pillow friends.