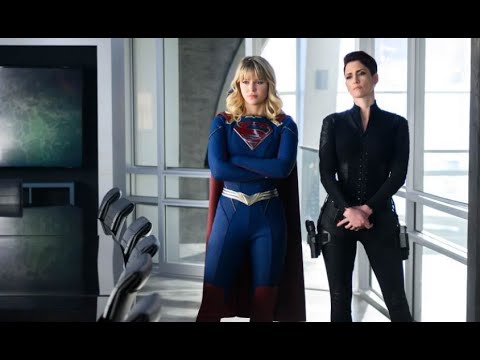 Ads by Amazon
Share on Facebook
Share on Twitter
Share on Pinterest
Share on LinkedIn
Mid Season premier of CW’s Supergirl featured the Earth after the conclusion of Crisis on Infinite Earths. Most people on Earth have no memory of the “Crisis” except for the heroes involved including Lex Luthor and those that Jon Jonzz helped recover their memories. A mass memory recovery is impossible as it would kill everyone. Lex Luthor is a “good guy” and in charge of the DEO. Lena’s memory, which was gone, is revived by Lex who propositions her with a partnership. Supergirl, not willing to the make the same mistake of the previous Earth goes to tell Lena the truth and ask for Lena to join her in fighting Lex. Brainy runs into a doppleganger. Back at the DEO, Brainy is confronted by 5 different versions of himself/herself as one is a female Brainy 5 (played by Jesse Rath’s real life sister Meaghan Rath). In an effort to find out what virus is attacking and killing Brainy’s, we find that one fo the Brainy’s is holding a bottle contains his undestroyed world compressed into an atomic level which he means to unleash. Unleashing the world would however destroy both worlds. The 3 Witches are also back. Stay tuned.
Today’s After Show Was Hosted By: Tehran Von Ghasri @IAmTehran

For more After Shows for your favorite TV shows and the latest news in TV, Film, and exclusive celebrity interviews, visit http://www.AfterBuzzTV.com