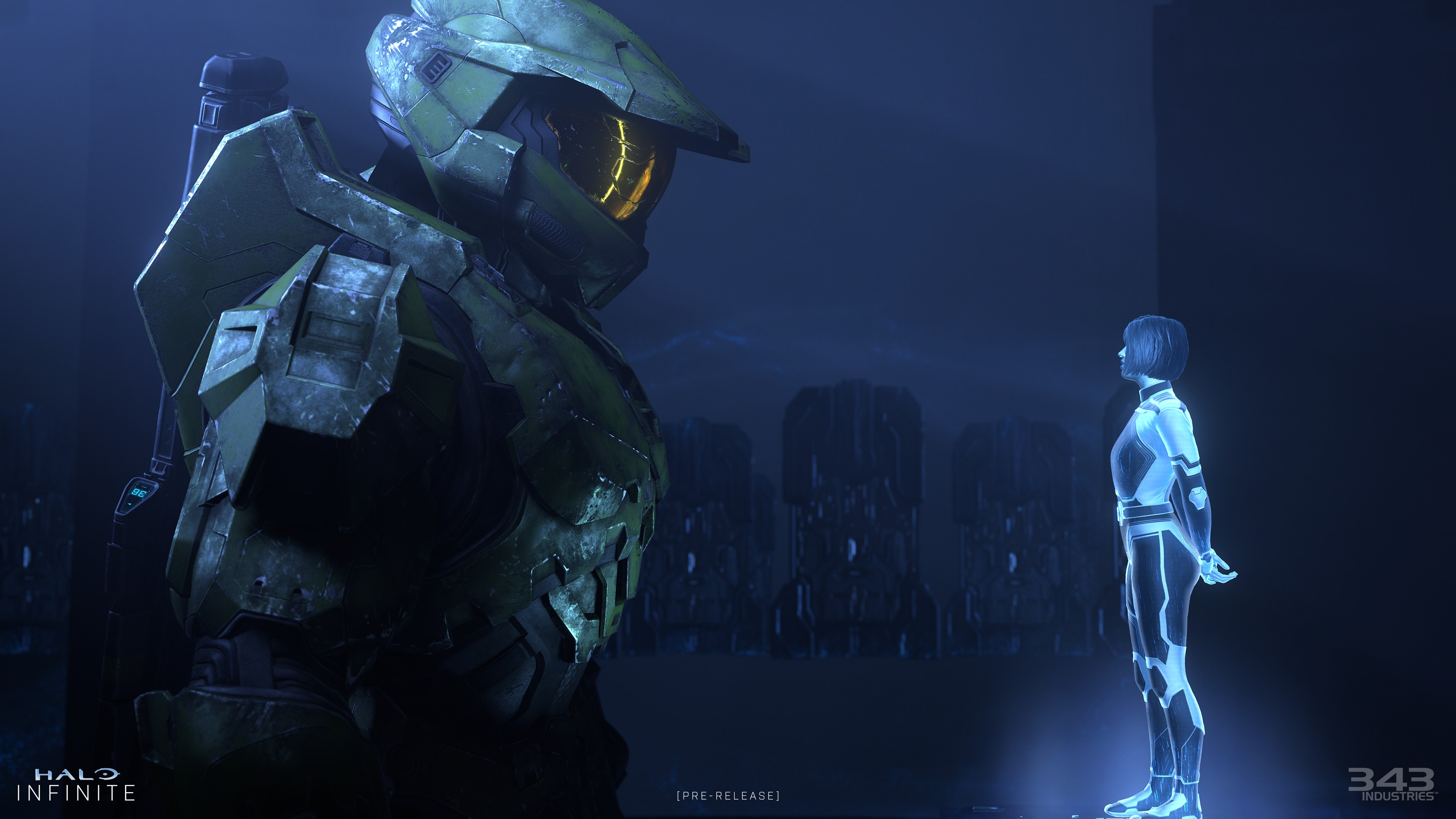 Even though it’s technically a sequel to 2015’s Halo 5: Guardians, Halo Infinite‘s mission was not so much to continue the story of the Reclaimer Saga and all the Cortana and Forerunner baggage that comes with it. Yes, there’s still a bit of that throughout Halo Infinite’s 10-15 hour story campaign, but the game’s main concern, as Master Chief crash lands on yet another mysterious Halo ring, is to recapture the magic of 2001.

From the opening space mission, it’s clear that Halo Infinite wants its 30+ year old fandom who bought the original Xbox two decades ago to feel nostalgic for the days of “The Silent Cartographer,” funny Cortana quips, and LAN parties. Overall, the game succeeds as a legacy sequel full of easter eggs and callbacks, even if at times it seems like the story wants to deconstruct the legend of Master Chief, show how it’s imperfect, and reveal the scars left behind after the fall of Cortana.

There are moments when the writers seem to want to do for John-117 what Star Wars: The Last Jedi did for Luke Skywalker, even putting him in the role of teacher for the game’s new AI character, an interesting inverse to his relationship with Cortana. But the story feels at its weakest when trying to communicate how those complex character beats relate to the ongoing Forerunner mumbo jumbo that makes up the overall plot. The story is full of the vague proper nouns that pervade other shooters of its ilk, like Destiny: the Conservatory, the Auditorium, the Harbinger, etc. Not that the original trilogy didn’t do this too, but fans cared about the Flood, the Index, the Arbiter, and the Ark.

Halo Infinite‘s attempt to go back to the franchise’s roots by packing an open-world full of familiar sights and sounds from Combat Evolved is a clear sign Reclaimer lore hasn’t quite captured the imagination in the same way. In fact, one of the biggest criticisms developer 343 Industries has faced since 2012’s Halo 4 is that their games deviated too far from the story and tone fans knew and loved. At the very least, Evil Cortana did not sit well.

But in Halo Infinite, you’re back on a Halo ring, shooting your way through Grunts, Elites, Jackals, and Brutes with your new, fast-quipping AI pal, The Weapon, who also happens to be voiced by legendary Cortana voice actor Jen Taylor. Together, you team up with cannon-fodder space marines, riding into enemy territory on Warthogs and tanks, and taking down the aliens with Battle Rifles, Needlers, and Gravity Hammers. To use another Star Wars comparison, it all feels like Han and Chewie taking command of the Millennium Falcon for the first time in 30 years. This is Halo‘s The Force Awakens.

Halo Infinite dishes the familiar setting and setup but in a shiny new package for next-gen consoles (not that Halo Infinite‘s graphics are particularly cutting-edge, I actually found them to be a bit underwhelming for an Xbox Series X flagship title). The game opens on a UNSC ship in space, with Master Chief navigating the chaos of a space battle gone terribly wrong, and he’s quickly given a reason to land on Zeta Halo, a mysterious ring that the Banished have captured after annihilating humanity’s forces there.

The Banished themselves call back to the original trilogy’s Covenant in very specific ways. While not directly associated with Halo 2‘s Tartarus and the Brute uprising on High Charity (if you know, you know), the Banished are another faction that broke away from the larger Covenant alliance to form their own galactic superpower. Like the Covenant, the Banished want to reactivate the Halo ring for a very specific purpose that nods to the Flood without actually including the gruesome parasitic species, and it’s up to Master Chief, The Weapon, and a very nervous Pelican pilot (referred to as Echo-216 for most of the game) to stop them.

If all that’s not enough of a nostalgia trip for you, wait until you have boots on the ground. Halo Infinite‘s open world is heavily inspired by one particular section of Combat Evolved: the Silent Cartographer level that remains one of the franchise’s most famous maps with its tall mountains, thick woods, and sandy beaches. Despite boasting a larger setting than past games, Halo Infinite‘s environments never really deviate from the familiar aesthetic and color palette. In fact, it’s arguably to a fault. Infinite lacks the more diverse terrains of past Halo games altogether — there’s no snow area, for example — although the game does let you explore a few high-tech Forerunner installations throughout the adventure that break up the monotony a little bit.

In general, the large map, which is broken up into several sections, is another one of the game’s weak points when it comes to pacing and activities outside of the main story missions (which are generally fantastic). Repetitive side quests and a largely empty map beyond the few points of interest scattered across the ring break up the action more than Halo fans will be used to. You’ll spend a lot of time driving from point A to point B to get to new missions, most of which can be placed in one of three categories: clear the enemy base, find a piece of loot, or kill the high-value target. You’ll have to do these over and over again in slightly different ways in order to 100% Halo Infinite, and it may make you wonder why the open world structure was even necessary, especially after you’re a few hours in and realize the map really has nothing new to offer you beyond what’s already been established.

But then the story missions come in and you’re thankful for the more wide open level design that allows you to tackle objectives in more than one way. In some instances, there are even multiple paths you can take to complete a mission or clear an area — again a nice return to the old Combat Evolved way of doing things over the much more linear Halo 4 and 5. The bigger spaces mean you can employ more vehicles and also make good use of Halo Infinite‘s greatest innovation: the Grapple Shot, a grappling hook that adds more verticality to the experience beyond Master Chief’s traditional long jump. It also speeds the gameplay up significantly, a cure to the franchise’s historically plodding traversal woes of the past. The Grapple Shot gives you more movement and combat options than any other Halo gadget to date. It’s simply spectacular and by far Infinite’s best addition to the classic formula of guns, grenades, and melee.

While not exactly a newcomer to the saga, Jen Taylor’s turn as The Weapon is the game’s other great addition and one of the main sources of nostalgia in Halo Infinite. Since The Weapon is a brand new AI companion only starting to understand the long-running conflict between humanity and the Halo rings, it allows Taylor and longtime Master Chief voice actor Steve Downes to replay many of the hits that made John and Cortana such lovable characters in 2001.

Chief is deadly serious, and even though you never see the face under the helmet, you know he’s not smiling. It’s up to Taylor once again to introduce much of the humor. Fortunately, the writing is so often funny — whether it’s The Weapon low-key roasting Chief or pointing out how ridiculous their predicament is at times — and Taylor absolutely nails the performance. After all these years, Taylor knows Cortana and is able to find a slightly different voice and tone for The Weapon that’s nonetheless familiar and comforting.

Ultimately, those are the key words to describing the Halo Infinite experience: “familiar” and “comforting.” In Halo Infinite, you don’t “finish the fight” as much as you relive it. It feels great to be back as Master Chief, on a mysterious new Halo ring full of secrets to discover, and with another AI companion by your side. Like The Force Awakens, this is the old story told in a slightly new way and for the most part it works.

Halo Infinite is out now on Xbox consoles, PC, and on the cloud through Xbox Game Pass.