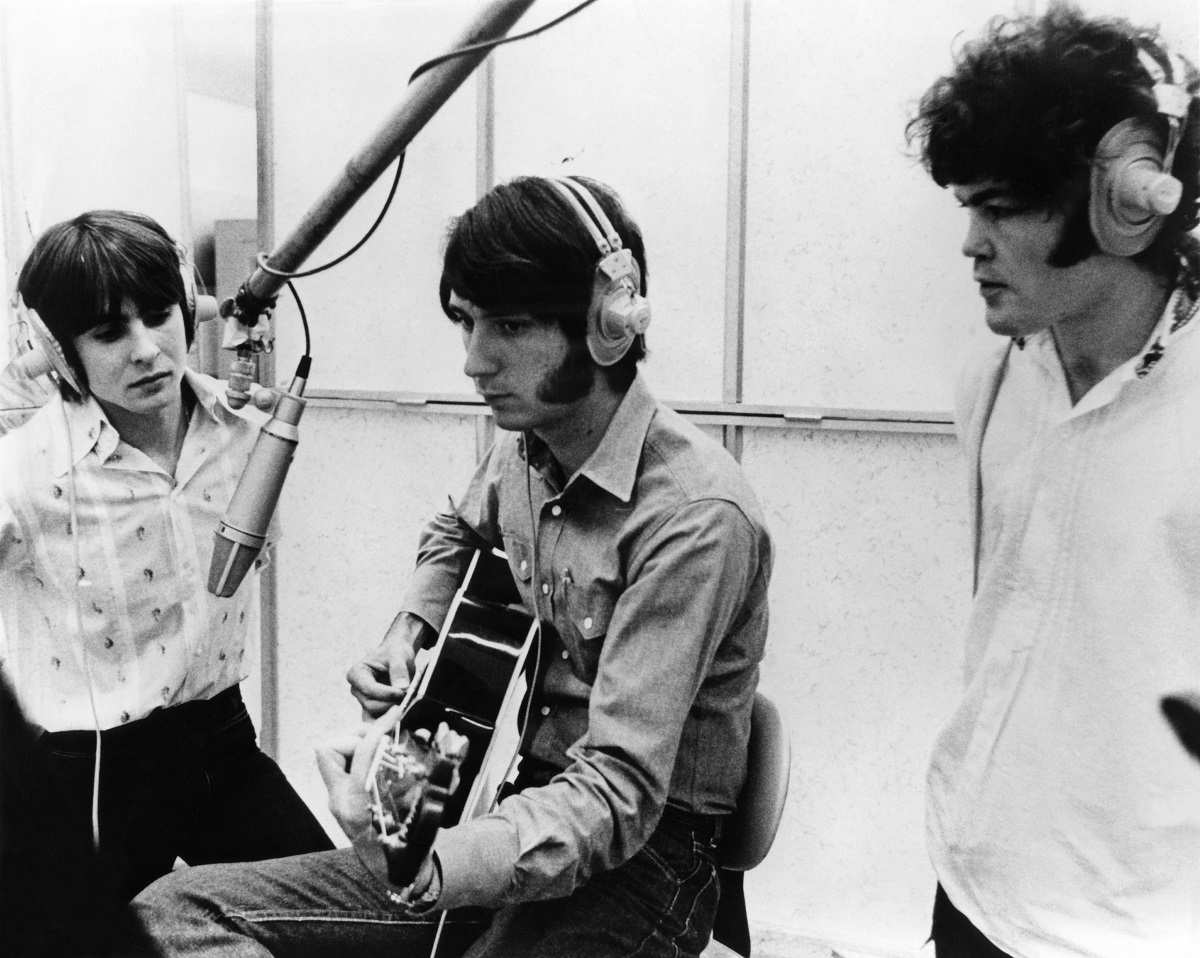 Robert Michael Nesmith, who died at the age of 79, is best known as the member of the Monkees who wore the wool cap, but also one of the band’s premiere songwriters. Besides providing several hits, the songs kickstarted the made-for-TV band into a self-producing, songwriting team.

The Monkees played their own instruments. Former child actors Davy Jones and Micky Dolenz weren’t initially proficient but were as eager to learn as any garage band. Musicians Nesmith and Peter Tork were hired as actors who knew how to ape The Beatles look in comedy films like A Hard Day’s Night and Help!.

Nesmith changed that. His song “The Girl I Knew Somewhere,” which was the B-side to the top 5 hit “A Little Bit Me, a Little Bit You,” was the first song that had all four Monkees playing on it.

Nesmith quit the Monkees four days after Paul McCartney announced he was leaving The Beatles. His first move, after taking off the cap, was to form one of the first country rock groups, the First National Band. During the Monkees, Nesmith provided hits for singers like Frankie Laine, who recorded Nesmith’s 1965 song “Pretty Little Princess” at the end of the decade, wrote the song “Different Drum,” which was a hit for Linda Ronstadt with the Stone Poneys. and continued songwriting throughout his career. His bandmate, and longtime friend, Dolenz recently released an entire album of Nesmith’s songs called Dolenz Sings Nesmith.

Here are some of the best songs, Nesmith wrote for The Monkees:

“The Girl I Knew Somewhere”

As mentioned above, Nesmith’s “The Girl I Knew Somewhere,” is the first song with all four Monkees playing. Nesmith is on guitar, Tork plays harpsichord, including that solo. Dolenz is on drums, and Jones plays assorted percussion. Session player Chip Davis’ bass is lively, melodic and rhythmic perfection.

This was the first step towards stealing recording time behind music supervisor Don Kirshner’s back, and it is a grand step for autonomy. The song came out as a single preceding the group’s third album Headquarters, but wasn’t on the record until it was reissued. Mike and Micky’s vocals are more than complementary, they feel like they’re enjoying the moment as much as a run in the sunshine.

Mike Nesmith’s “Tapioca Tundra,” off The Monkees’ fifth album, The Birds, The Bees, & The Monkees, captures the feel of Paul McCartney’s late Beatles’ offerings, without sounding at all like a copy. It opens with a vaudeville feel, where melodies are whistled, before the band turns those corny chords into rock, roll, and a tinge of psychedelia. The song is sung through a megaphone, but it doesn’t evoke the nostalgic kitsch of the period’s The New Vaudeville Band hit, “Winchester Cathedral.”

Psychedelic, angry, and socially provocative, “Writing Wrongs” is on the 1968 album The Birds, The Bees & The Monkees. Nesmith is the only member of the Monkees on this piece. His piano sets the tone while he is also heard chugging along on guitar, with Rick Dey on bass, and Eddie Hoh on drums and percussion.

Haunting and loose until Mike kicks in with that fast strum, the song is highlighted by his Hammond organ lead during the instrumental break, which goes on longer than most mainstream acts at the time. Nesmith was a pioneer, and this is a much-overlooked number.

“You Just May Be the One”

With its double-tracked vocals, and a dotted drawl of syncopated melody, Nesmith knew “You Just May Be the One” was catchy enough to warrant two versions. It’s worth it just to hear that jumpy bass popping between different fingers. When The Monkees perform it, that’s Tork on bass, and their version is straight up live garage band mastery.

Nesmith produced another, much more polished, version of the song using the Wrecking Crew studio musicians who worked for the TV show, including Glen Campbell, James Burton, and Hal Blaine, although Tork is one of the guitarists on it. The rhythm is strong, the harmonies subtle, and the genres kiss.

Both Nesmith and Tork believed Dolenz’s voice was the “sound” of the Monkees, and often turned over lead vocals on even some of their best and most powerful songs. Written for the 1967 Pisces, Aquarius, Capricorn, and Jones, LTD album, “Daily Nightly” was a psychedelic breaking of the curfew protests which were happening on the Sunset Strip, much like the Buffalo Springfield song “For What It’s Worth.” The Moog synthesizer brings the song into another stratosphere, while the bass grounds it in a deep melodic groove.

Originally recorded by the legendary Paul Butterfield Blues Band for their 1966 album, East-West, “Mary Mary” had street cred and hit potential, but never came out as a single. Featured on the album More of the Monkees, the song was given away as a prize in a cereal box, and is Monkees comfort food. The opening blues riffs are played by Glen Campbell, and Dolenz brings a strong rhythm and blues tonality to the breathy sweetness of his voice. He’s cajoling and playful, matching Nesmith’s lyrical games. The hanging tambourines are positively whimsical.

The country-pop arrangement, and a vocal sound reminiscent of Roger Daltrey from the early days of The Who make “You Told Me” a standout. One of three songs Nesmith wrote for Headquarters, the first album The Monkees recorded all their own instruments on, it comes to life because of the interplay between Nesmith’s guitar and Tork’s banjo. The bass pushes it forward forcefully, and it presents a pop journey from beginning to end.

Recorded in the studio and live in Salt Lake City, Utah, for the movie Head, “Circle Sky” opens with a descending guitar rhythm that sounds like Nesmith kicked Bo Diddley down a fire escape before it kicks into power trio psychedelic garage overdrive. Played with pure rock and roll aggression, The Monkees blast this with the same proto punk energy they brought into “Stepping Stone.” Mike’s singing about TV and corporate collusion, and the live footage made it all too clear with violent footage from the raging Vietnam War.

The trio of Nesmith, Tork and Dolenz brings out the best in each instrumentalist. Mickey is loose, Dolenz is tight, Nesmith has the most motion, and Jones’ maracas hold it together just as it feels like it’s going to derail.

Nesmith presented the Monkees’ producers with “A Different Drum,” a song he’d written in 1964. The sitcom suits didn’t feel it fit the style of the group. The song had already been recorded in 1965 by Greenbriar Boys for their album Better Late Than Never. Nesmith did perform a rushed version of the song as part of a comedy bit during the December 1966 episode “Too Many Girls.”

Linda Ronstadt recorded her version with The Stone Poneys in 1967, which was released by Capitol Records and peaked at No. 13 on the Billboard Hot 100. When Nesmith left The Monkees, he re-recorded the song for his solo album And the Hits Just Keep on Comin’.

“Listen to the Band”

This was the most fitting tag for the Monkees. It is a demand which came too late. The series was over, the movie was done, and Nesmith wanted us to “Listen to the Band.” He fought harder than the other band members for musical control, even punching a wall next to Colgems’ lawyer Herb Moelis, to emphasize the point that the band should pick their own music.

Recorded in Nashville, Nesmith got to record with Muscle Shoals session players David Briggs, Jerry Carrigan, and Norbert Putnam, who backed soul artists like Wilson Pickett and Aretha Franklin. Once again indulging his love of syncopation, “Listen to the Band” captures a completely different feel than the Monkees’ work with the Los Angeles Wrecking Crew, but became a coda to the made-for-TV band’s first post-TV series album. Play the drum a little bit louder.

Pizza Tower Is the Best New Wario Land Game We’ll Probably Ever Get
The Last of Us: Who Is Kathleen In the Games?
Marvel Studios’ Ant-Man and The Wasp: Quantumania | Before
How to Find a PS5 and Xbox Series X In 2023
Why Dragon Quest Has Always Been So Much More Popular In Japan