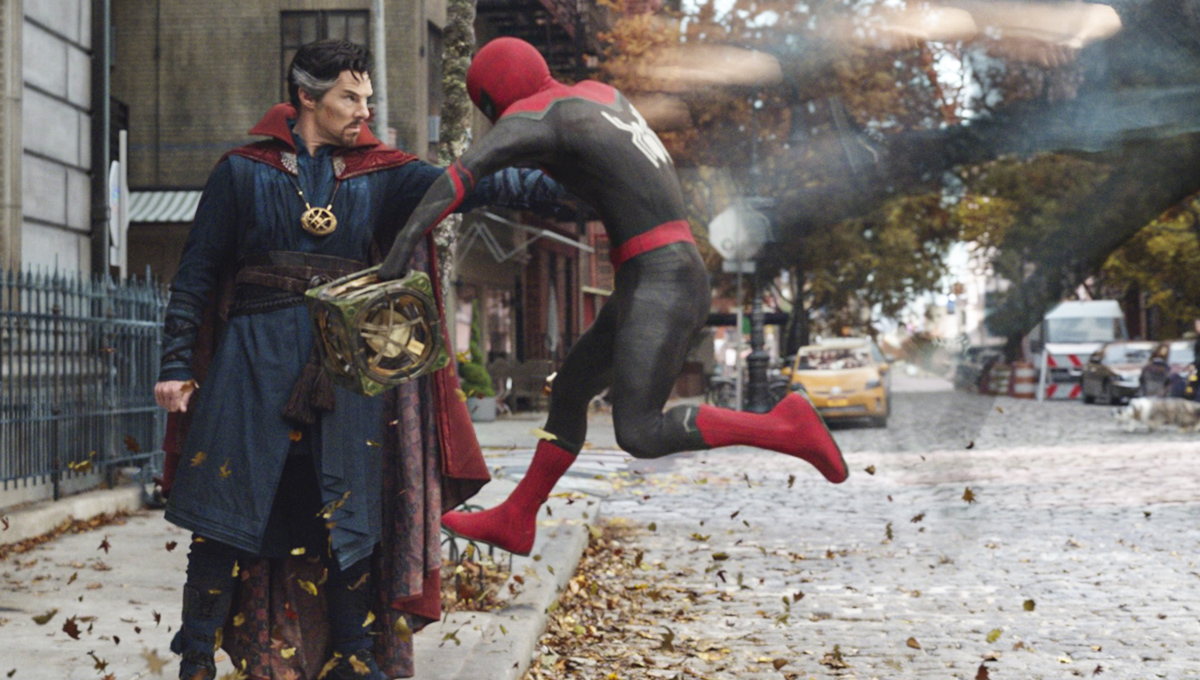 The secrets of Spider-Man: No Way Home have escaped into the ether, thanks to a plethora of advance reactions (including our own review) and even some leaks, but most moviegoers remain enthusiastically unsullied going into this weekend’s wide release. While this is arguably a testament to Sony’s ability for keeping crucial secrets, the studio originally had loftier plans when it comes to the film’s marketing strategy, according to Tom Holland. Imagine, if you will, a scenario in which the threequel’s heralded multiverse villains served as a surprise plot twist.

Sony Pictures has spent months inundating us with Spider-Man: No Way Home trailers and TV spots focused on the premise of Tom Holland’s Marvel Cinematic Universe Wall-Crawler tangling with villains conjured from previous Spider-Man movie iterations. However, the studio originally envisioned a deceptive promotional plan to maintain secrecy over the film’s now-widely-known multiverse jailbreak by pushing the premise of heroic infighting evocative of 2016’s Captain America: Civil War. Indeed, as Holland reveals to Yahoo UK, the manifestation of the villains was intended to catch audiences off-guard.

“The initial plan was to make the film seem like a civil war between myself and Doctor Strange and they were gonna keep everything a secret,” says Holland. “That is impossible.”

The buildup to Spider-Man: No Way Home will likely go down as one of the most hyped, speculation-strewn promotional processes in history, thanks to the infinite possibilities facilitated by its Spider-Man: Into the Spider-Verse-inspired multiverse mania. It started in October 2020 with the rapid release of trade reports, first with the perplexing claim that Jamie Foxx’s The Amazing Spider-Man 2 villain, Electro, was crossing franchises to tangle with Tom Holland’s Wall-Crawler, after which a report of Doctor Strange’s presence led to a deluge of magic-made multiverse theories. Indeed, by that December, Alfred Molina’s celebrated Sam Raimi-era Spider-Man 2 villain, Doctor Octopus, was an apparent lock, sealing enormous audience expectations. Yet, the news cycle essentially spoiled what was to be a legendary, I am your father-level moment.

While we don’t know if the revelatory-in-hindsight 2020 trade reports were the result of escaped intelligence or intentional disclosures, Holland, along with the primary No Way Home cast, was clearly privy to Sony’s ambitious early plan of maintaining long-term secrecy over the film’s treasure trove of secrets. Of course, as he states, such a task would be impossible, especially today with the leak-facilitating platform of the Internet now magnified exponentially by social media. Indeed, set photos would have surfaced of returning actors like Molina, Foxx, and Green Goblin-reprising Spider-Man star Willem Dafoe in full costume, complementing an inevitable variety of unsourced accounts of their roles. After all, even many of the secrets—and, rest assured, I won’t dare say which ones—that Sony continue to keep covered have ultimately been validated.

Yet, the false scenario remains intriguing when thinking about the potential level of audience interest for a cover plot primarily pitting Spider-Man against Benedict Cumberbatch’s Doctor Strange. While it’s an exciting face-off for a dynamic that started with “made-up names” in 2018’s Avengers: Infinity War, it doesn’t sound like something that would sufficiently progress the arcs of Peter Parker, Stephen Strange—or, for that matter, Spidey’s side of the MCU as a whole—in any meaningful manner. Sure, No Way Home would have provided plenty of footage to foster the ruse, but the scenario, which Holland himself calls a “civil war” between the heroes, sounds like a retread of something we’ve already seen, notably in the aforementioned Civil War, in which Holland’s Spidey made his monumental MCU-adherent debut. Thus, such a strategy might have become detrimental to the film’s buildup, which would have paled in comparison to its current, potentially record-breaking pandemic-era momentum.

Nevertheless, Holland’s revelation does leave one to wonder if Sony could have actually pulled off a secrets-keeping campaign of such an enormous magnitude for such an intrinsically porous project. After all, the successful keeping of said secret would have facilitated a moment that would have undoubtedly become one of the biggest and iconic applause moments in the immortal annals of cinema. However, said moment would have come with an enormous opportunity cost of squandering months of valuable PR to pitch a plot the public that, frankly, just doesn’t sound exciting enough to warrant No Way Home’s enormity. Thus, regardless of the film’s final tally, the more prudent strategy was taken.

How Did the Cordyceps Infection Start In The Last of Us Games?
The Last of Us: Are the Infected Actually Zombies?
How to Find a PS5 and Xbox Series X In 2023
Comic To Screen | The Sandman | DC | #Shorts
Dead Space Remake Release Time: When Will the Game be Playable?