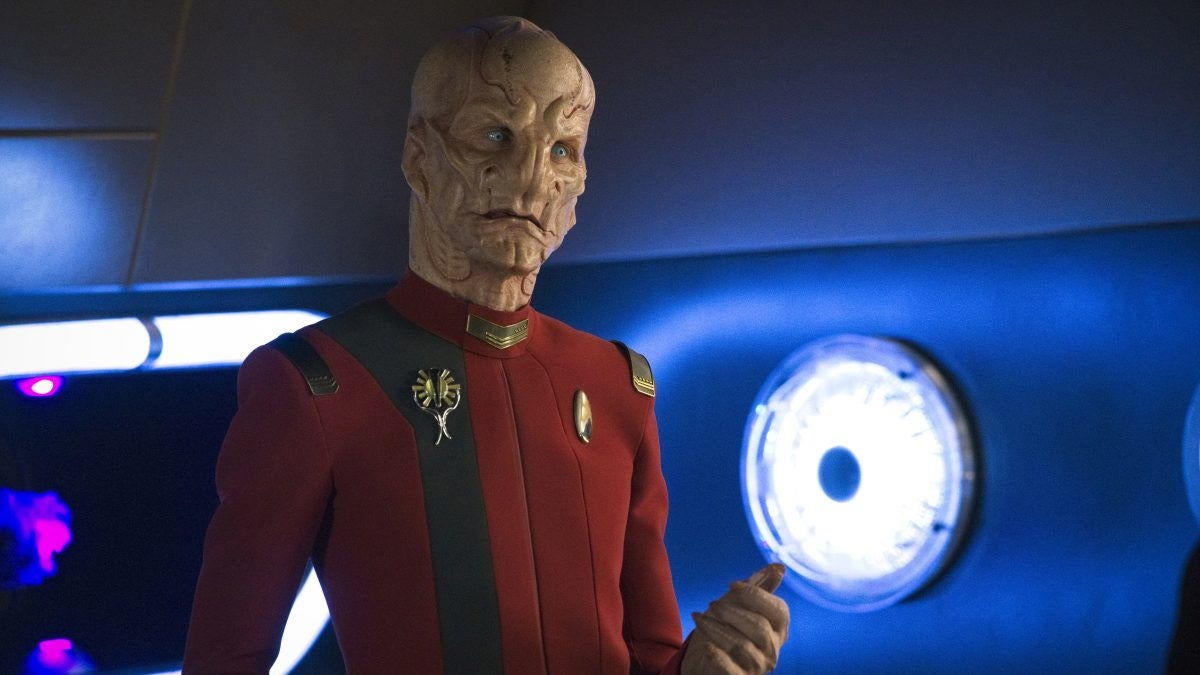 Following in the footsteps of Season 3, the first batch of episodes in Star Trek: Discovery Season 4 do two things: The overall story of the season-long arc is explored, but, the episode itself presents a standalone story in the classic Star Trek tradition. Last week, Tilly got her “Galileo Seven” moment, but this week, in “The Examples,” DISCO tackles a classic Trek ethical dilemma.

As Burnham and Book navigate the morality of saving prisoners on a doomed colony, “The Examples” front-loads the episode with a ton of callbacks and Easter eggs to the rest of the franchise. Here’s every Easter egg and big reference we spotted in Star Trek: Discovery Season 4, Episode 5…

Right away, the episode hits us with a few starship names that sound familiar. The first is the USS Janeway, an obvious reference to Captain Janeway from Star Trek: Voyager, and more recently, Star Trek: Prodigy. Interestingly, however, the USS Janeway doesn’t appear to be of the souped-up 32nd Century “Intrepid Class” ships. Instead, it looks like it’s one of the new Constitution-class ships, kind of like the USS Armstrong, which was referenced in Episode 4.

Interestingly, although the Voyager-J is a 32nd Century Intrepid Class when this style of ship was incorporated into the game Star Trek: Online, a variant class was called “Janeway-class.”

The other ship, which is almost certainly from Ni’Var, is called “the T’Pau.” This references the character T’Pau, first introduced in the TOS episode “Amok Time,” and later appeared in the Enterprise three-parter which began with “The Forge.” In the TNG episode “Unification I,” Geordi and Riker are also trying to analyze the wreckage of a Vulcan ship called the T’Pau, proving that this is one Easter egg Star Trek loves; naming Vulcan ships after the lady who officiated Spock’s wedding.

If someone asks you if you are a space god, you say…yes! In trying to figure out various candidates as to who could have constructed the DMA, Admiral Vance throws out some very deep cuts to aliens who might have had the super-advanced tech to cook up this artificially constructed space wave of doom. Although the DMA kind of looks like V’ger from The Motion Picture, nobody mentions V’ger,and V’ger continues not to get the love it needs.

But, Vance does mention the following four groups

We’re told hotshot scientist Ruon Tarka (Shawn Doyle) is “working with Aurelio,” on research about the DMA. Aurelio is the human scientist, formally working for the Emerald Chain, introduced in Discovery Season 3. Although he doesn’t appear in this episode,  is played by longtime Discovery star, Kenneth Mitchell.

No Owosekun or Detmer up front

Notably, this episode is one of the first times we don’t see Owosekun and Detmer in their usual positions at the ops station, and at the helm. Instead, there are two new characters, upfront. This isn’t an Easter egg exactly, but it does mean that the crew of Discovery seems to finally be on some kind of sensible shift rotation.

Although Tig Notaro’s Jett Reno has appeared as a semi-regular since the start of Discovery Season 2, the opening credits for this episode seem to give her a promotion to series regular! Cool.

Stamets mentions that he’s been giving notes to Ruon Tarka about “not harming the jahSepp.” This references the alien species, the jahSepp, who live inside of the mycelial network. The jahSepp were first revealed in Discovery Season 2, and for much of that season, took the form of May Ahearn (Bahia Watson), someone Tilly had known as a child.

“The Examples” and the Prime Directive

The premise of this episode of Discovery presents a somewhat classic Star Trek ethical dilemma. Although the government of this colony doesn’t fall under the Prime Directive, the people themselves are not Federation citizens. In all of Star Trek canon, the idea that a planet can be contacted, but not messed with is murky, and it almost always has to do with the planet being a non-Federation world. In Deep Space Nine, Sisko often had to take a step back from internal affairs on Bajor, even though he didn’t want to. In The Next Generation, Picard couldn’t directly influence the political affairs of the Klingon Empire, even though he totally did. But, on the other hand, when Worf murdered Duras, Picard was in a legal grey area; by Federation law it was illegal, but under Klingon law, it wasn’t at all.

Book’s negative reaction to Burnham granting autonomy that results in suicide isn’t an intentional Easter egg, but it does echo Lwaxana Troi’s reaction to ritualistic suicide in the TNG episode “Half a Life.” Interestingly, that planet, Kaelon II, was also a non-Federation government.

TLDR: When non-Federation planets are involved, Starfleet tends to get kind of Prime Directive-y, even if the exact rule doesn’t apply.

A reference to Battlestar Galactica, 1978?

This is probably a stretch, but the idea of symbolic prisoners, serving out entirely unfair sentences vaguely echoes an episode of the 1978 Battlestar Galactica called “The Long Patrol.” In it, Starbuck (Dirk Benedict) crashlands on a planet populated by prisoners who are in jail for crimes committed by their ancestors. As such, they all have names like “Bootlegger 137.” It also leads to the classic question: “what kind of crime is star-bucking?” Okay, BSG digression over.

“Counted Cards at a Tongo Club”

One of the prisoners in “The Examples,” mentioned that their crime was that they “counted cards at a tongo club.” Tongo is a game that first appeared on Deep Space Nine, and is, seemingly, a Ferengi game. Like many sci-fi card games (see, sabacc in Star Wars), the rules of tongo are a little odd. It is a card game, but it also has a spinning wheel element to it, too. In DS9, Dax was a tongo shark.

In a show-stopping therapy session, David Cronenberg’s Dr. Kovich reminds Dr. Culber — and the audience — of a somewhat unresolved plot point. “You died,” Kovich says to Culber, and then mentions that his official file was fairly generic in terms of how Culber recovered from that experience, emotionally. This references the events of “Saints of Imperfection,” in Season 2 as well as “If Memory Serves…” But, more broadly, this addresses an interesting trope in Star Trek, which Lower Decks interestingly tackled this year, too. Very often in Trek canon, major characters come back from having died. In LDS Season 2, this was turned into an inside joke; insofar as junior officers would often be entirely in the dark as to why a dead character returned to life…and active duty immediately!

With Culber and Kovich’s conversation in this episode does something similar: address a very common Star Trek trope, with a new level of scrutiny. This time though, what Kovich says is pretty smart: If someone did die and come back to life, they might develop a martyr complex right away. Which, oddly enough, explains quite a bit of Star Trek narratives from a physiological point of view.

When Burnham and Book disable the force field surrounding the prison, their phasers emit solid beams. This is a small thing, but this rarely happens in Discovery. Although solid beams from phasers are a staple of the franchise before the 21st century, the post-Abrams era has seen most phasers fire little pew-pew bolts. In the Season 2 finale of Discovery, “Such Sweet Sorrow Part 2,” we did see the Enterprise fire solid blue phaser beams, as it often did in TOS. In DISCO Season 3, we saw Burnham’s new phaser fire a solid blue beam when she was using it to cauterize a wound in her leg. And here again, Burnham and Book’s phasers are emitting solid beams, kind of like an old-school TNG effect.

The biggest news in this episode is easily the introduction of Ruon Tarka (Shawn Doyle). While we have no idea what the deal is with that thing that Book spotted on his neck, we do know that the tattoo on his head means he’s from the planet Risa. In “The Examples,” he jokes dismissively about being from “the pleasure planet.” Risa was first introduced in the TNG episode, “Captain’s Holiday,” and has subsequently been referenced throughout the franchise.

Interestingly, there’s never really been a major character on Star Trek from Risa though. As Tarka implies, it’s a place people visit, but we haven’t ever really heard of anyone leaving there. It seems unlikely that Discovery is going to take a holiday to Risa anytime soon, but if Tarka sticks around this season, we could see the planet again. For him, Risa isn’t a vacation. It’s home.