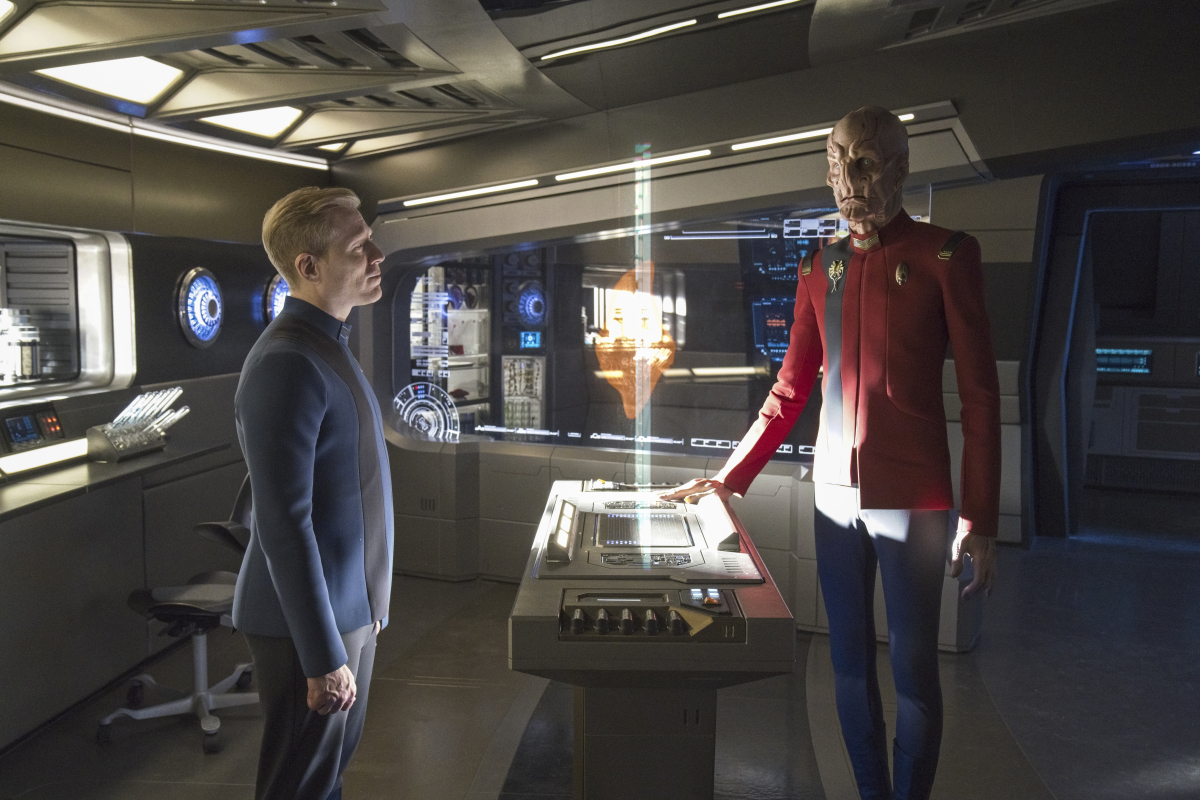 After several weeks of smaller, character-based stories, Star Trek: Discovery dives right back into the apparent season-spanning question of the mysterious gravitational anomaly that is capable of destroying entire worlds. And, in doing so, it manages to – albeit briefly – wrestle with just the sort of ethical conundrums with no easy answers that Star Trek has always been so uniquely good at exploring. (And that’s not even counting the fact that the ship’s computer seems to be somehow developing human emotions, which is going to just have to be a question for another day.)

Thanks to the sudden disappearance of the DMA and its subsequent reappearance in a completely different place, science now tells us that this bizarre event is not naturally occurring. (Apparently doing so on its own would completely violate all the known laws of physics.) The idea that someone not only made but is apparently controlling this thing is incredibly monstrous, and another rough dose for Book, who was having a hard enough time processing the idea that his home planet of Kwejian was simply the victim of awful bad luck as opposed to targeted in some way.

Who, precisely, could have done such a thing, and what their ultimate goals are remain a mystery, and though Admiral Vance rattles off a few possibilities, none of them seem particularly noteworthy. Therefore we can only assume that the true answer awaits us later in the season, and I suspect it’s going to be a name we recognize in some form or other. (The revelation later in the episode that DMA must take immense power to control would seem to support that guess.)

Admittedly, I’m a bit apprehensive about this twist, as there was something both terrifying and fascinating in the idea that the DMA was just a literal force of nature, pure destruction born of space and circumstance that would only be stopped or harnessed by the same combination of the same. The idea that this is a manmade event, one that will likely turn out to be some sort of terrible weapon or controlled by a psychopath bent on doing others harm is…well, that feels a lot less like a story I need this show to tell. I’m not particularly interested in Discovery giving Michael and the Federation another catchall enemy to fight. But this season has thus far so surpassed my initial expectations that I’m willing to see where it goes, as nervous as I might be about it.

This hour is much better in the specifics of its plot of the week, a rescue mission to save a group of Akaali on a colony on the edge of the projected path of the DMA. (Though since it can apparently simply move anywhere, I’m not entirely sure what good projections do here? But let’s go with it.) Anyway,  Burnham and friends are tasked with evacuating everyone immediately, as they won’t know whether the settlement is in the path of the anomaly until it’s too late to transport people off-world.

Their mission seems fairly straightforward, at least until they learn that the planet’s prison has been abandoned, the “lawful” Akaali having apparently decided that imprisoned lives aren’t worth saving, and they’ll be left behind to face whatever comes. Michael, being Michael, isn’t having any of that, and vows that she and Book will make sure these people are able to be evacuated as well.

These titular “Examples” are prisoners whose crimes were punished with sentences meant to serve as deterrents to potential future lawbreakers, not necessarily as a form of actual justice. (One of the prisoners has been in jail for decades for stealing bread for his family, for example.) But as members of a former Emerald Chain colony, the Federation has had no jurisdiction and, frankly, literal interest in their plight prior to right now. It’s therefore completely understandable that none of these people are especially interested in trusting Michael, and might well view a 50/50 shot that the DMA won’t destroy their planet as a potentially better chance for freedom than an uncertain future as refugees.

Michael manages to quell their objections fairly quickly, a twist which is fairly necessary given the various time-based restraints on this story, but there’s still some part of me that wishes it had been a little harder for her to gain their trust by way of a potential legal loophole that will likely see their cases reviewed if they claim protected status with the Federation itself. The sudden revelation that Felix, the ringleader of “The Examples” is, in fact, an actual murderer is much more of the sort of messy moral quandary I like in my Star Trek – is this a man that deserves to be saved?

But it is a problem that is also neatly solved by his convenient decision to stay on the planet where he committed his crime, even if it means his own death. (Which, of course, it does – the anomaly heads right for the colony, and we lose communication with Felix just as he’s recounting how guilty he feels about killing and robbing a man who tried to be kind to him and stealing the family records of that man’s young daughter.)

Felix’s decision to essentially commit suicide by way of gravitational anomaly is perhaps most interesting in the way it impacts Book, who is convinced that he and Michael should save this man’s life, no matter whether he wants them to or not, and advocates for forcibly removing him from the planet if need be. Michael gently reminds him that they can’t deny another living being agency in something like this, but Book truly appears to be in agony, desperate to save even one more life here as some sort of cosmic trade for all the ones he couldn’t rescue on Kwejian. David Ajala is truly the stealth MVP of Season 4 thus far, and you truly love to see it.

Elsewhere, famed scientist Ruon Tarka arrives on the Discovery, ostensibly to help Stamets figure out what sort of tech could be behind the DMA and who might have had a hand in making it. Stamets is already predisposed to not like him since Tarka has ghosted his requests to talk about the new upgraded spore drive he’s working on. As a result, Stamets is rather hilariously smug about the fact that he’s yet to crack the navigator problem. I think petty Stamets is my favorite Stamets.

Unfortunately, Tarka also feels like every terrible man I’ve ever had to watch speak on a panel at a tech conference. Almost everything about him is annoying, from his bombastic sense of his own awesomeness to his willingness to put others’ lives at risk in the name of proving a point. It’s clear that his obnoxious, single-minded drive is meant to stand as something of a contrast to and cautionary tale for Stamets and Culber, who have both basically been working themselves to death even as they ignore their own emotional demons. But I think I’d be just fine if we never saw him again.