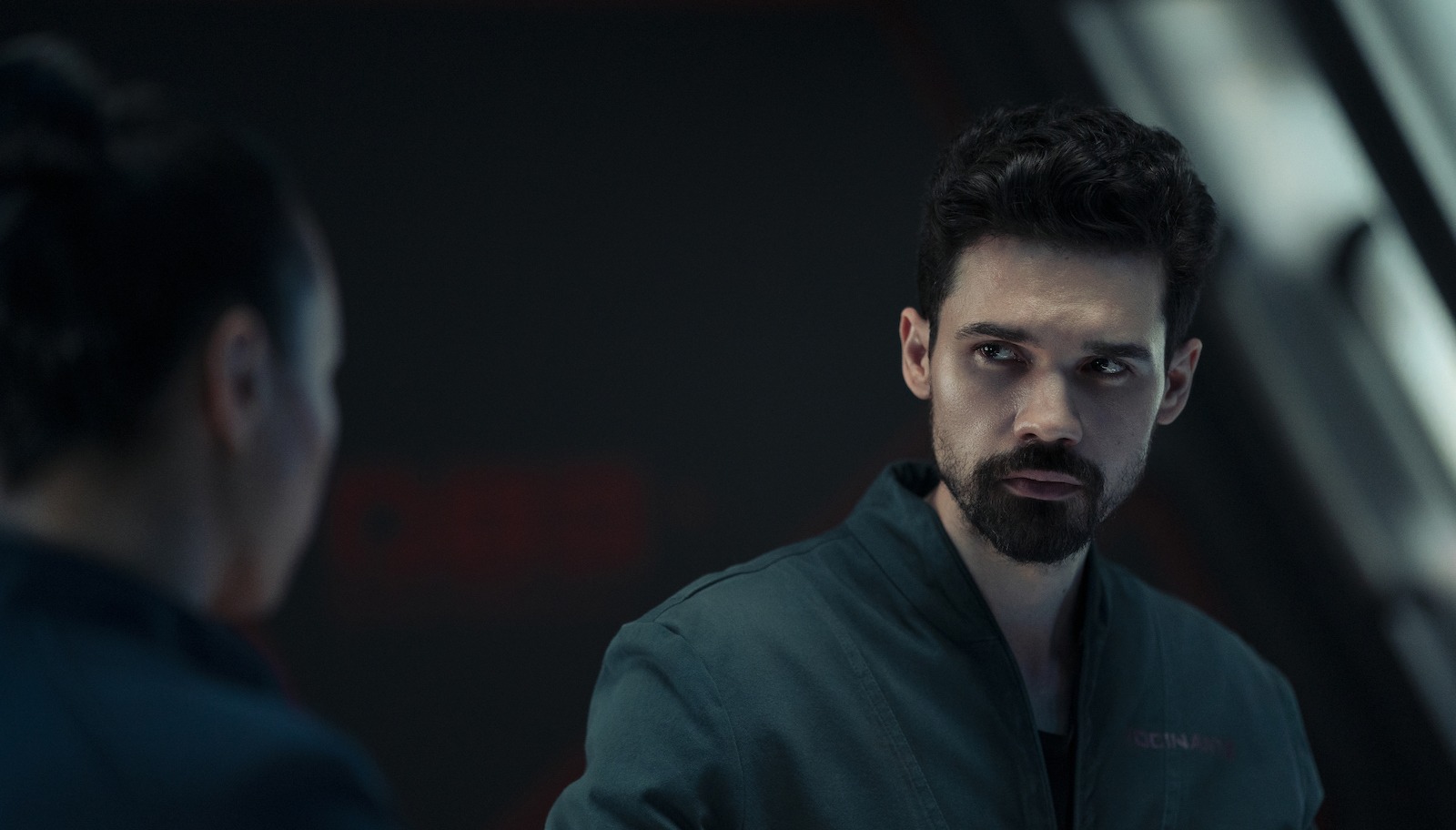 This review contains spoilers for The Expanse.

What a difference a week makes! If Prime Video had released the final season of The Expanse all at once, viewers would have seen the premiere as nothing more than the preamble to episode 2, but on its own “Azure Dragon” stands out as an action-packed but also emotionally powerful installment that deserves its own week of appreciation. Although it’s still easy to wonder how the story can possibly wrap up in four more episodes, things are definitely on a good track.

Even small moments like Naomi freezing up during the mission to capture the Azure Dragon had its own almost completely unspoken impact. Even for a Belter born making ship-to-ship jumps like this one, Naomi is clearly feeling the trauma of her suitless escape through the void in The Expanse season 5. There was something very sweet about her exchange with Holden saying she was okay, but not ready to talk about it.

And of course her hesitance left the door open for Clarissa to save the day, even though Naomi still had to coach her through unhooking the enemy’s reactor. Bobbie’s calm efficiency in her Marine power suit was badass, but perhaps a bit of overconfidence led to a flanking maneuver that would have succeeded if not for Clarissa’s debilitating superpower. Holden may have chastised Peaches for going off-book, but her quick thinking saving a life and earning her a spot on the crew brought us the episode’s most touching moment.

But the emotional impact of this week’s The Expanse goes beyond poignant moments like the above. Watching Drummer slowly hatch a strategy for rebellion with the Golden Bough clan was really something to behold. What began as a simple rendezvous to drop off Michio became an intelligence gathering mission to raid the Free Navy’s supply depot. While the scenes were not overtly action-packed, Drummer’s ability to project authority and hint at a coming battle is worth every second of Cara Gee’s screen time.

Although the same can’t be said for Marco Inaros and his family issues, the scenes that followed the Free Navy intrigue were still much improved this week. This is mostly thanks to Rosenfeld’s brutally honest counsel, which puts a voice to the audience’s own frustration trying to sympathize with poor Filip. And despite our realization that the Rocinante has removed one of the Free Navy’s most powerful weapons against Earth, the promise of yet another approaching conflict is as welcome as Marco suggests.

In fact, the scenes between Marco and Rosenfeld are almost more effective than those between Avasarala and Monica. Not that the Secretary’s General’s initial abrasiveness and later snake-like charm aren’t enjoyable to witness. But the PR campaign to make the Belters see the pain they’ve caused is posturing that is difficult to communicate on screen. While I’m sure more sympathetic Belters are bound to rise up against Marco’s tyranny, this plotline seems designed only to give Avasarala something to do.

Meanwhile, the drama unfolding on Laconia between the young girl and her family of scientists has its own appeal, especially given what Holden discovered about the unorthodox gate transition of some of the Martian defectors who presumably colonized that planet. Larger forces are at play, and the little girl trying to force the alien wildlife to fit her Earthly views with tragic consequences feels just like what humanity is doing with the protomolecule technology. An effective metaphor!

So now fans of The Expanse anxiously await the next episode, but unlike with the premiere it’s not because the current installment left them wanting. This time, the excitement of the building tension and the wonderfully executed space chase have us all on the edge of our seats, waiting to see what’s going to happen. The only question that remains is that, with a six episode season, when will events reach their climax? If we’re lucky, it will reach a peak soon and not let up until the final curtain falls.

Forspoken Is That Frustrating Piece of Entertainment That Gets Good “Eventually”
Other Space | Comedy Sci-Fi Series | Coming Soon to DUST on TV
Should Marvel Change MCU Strategy on Disney+?
How Did the Cordyceps Infection Start In The Last of Us Games?
Batman: The Doom That Came to Gotham | Trailer | DC