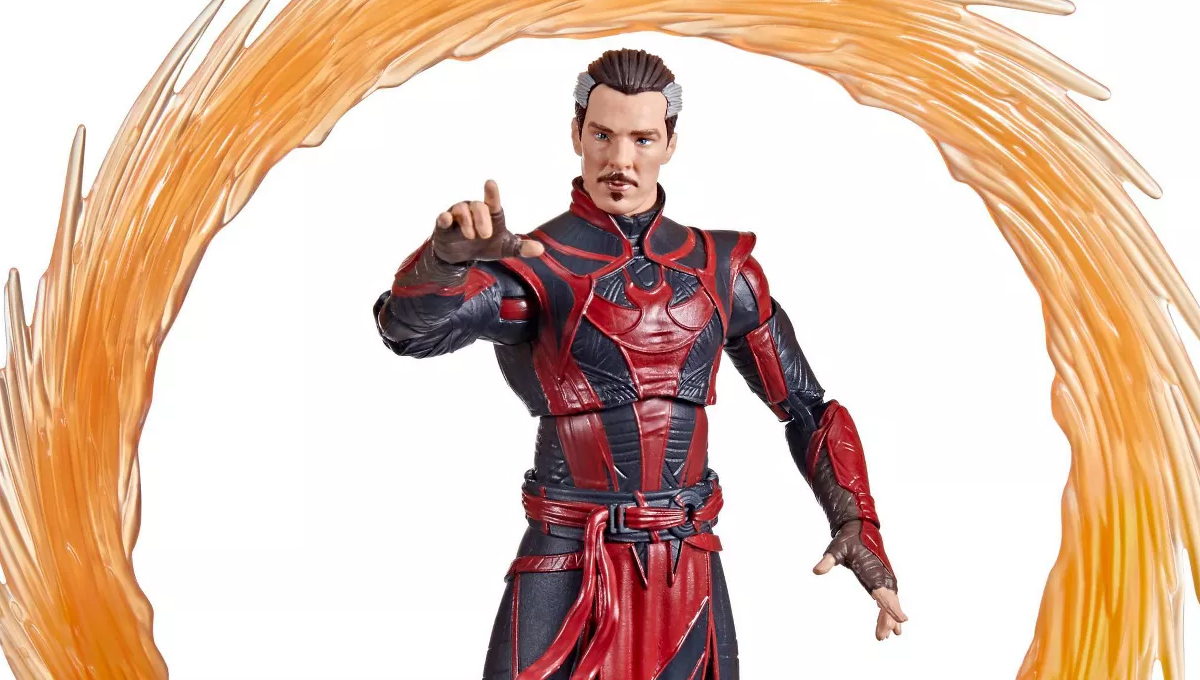 Doctor Strange in the Multiverse of Madness has effectively kept its plot details covered under a magic cloak of secrecy, but the time for touting approaches, especially as its direct predecessor, Spider-Man: No Way Home, hits theaters this weekend. Consequently, a tradition for Marvel Cinematic Universe tentpole pictures has just been fulfilled with a grand unveiling of the 2022-scheduled sequel’s tie-in toys, providing previews of unseen characters and costumes.

Hasbro Toys is now teasing the Marvel Legends 6” scale action figure line’s wave of tie-in toys for Multiverse of Madness. Among the various surprises, the preview provides a potentially profound revelation with a build-a-figure of Rintrah, a somewhat obscure green Minotaur-like sorcerer from the pages of Marvel’s Doctor Strange comics, seemingly brought to live-action glory for the movie, as the plastic suggests. Oddly enough, Elizabeth Olsen’s returning post-WandaVision Wanda Maximoff/Scarlet Witch is nowhere to be found in this wave.

With that set, let’s take a look at the movie-related Marvel Legends Multiverse of Madness wave, which—per the line’s usual practice—also includes a few movie-unrelated comic book characters, in this case Sleepwalker and D’Spayre.

The movie wave’s obligatory standard Doctor Strange figure—which will be packed two per case—offers the first official substantive look at the new outfit that Benedict Cumberbatch’s onscreen Sorcerer Supreme will don at some point in the film. Indeed, I emphasize “at some point” because the wave also includes a new version of Strange’s astral form, which depicts him in his old outfit. Interestingly enough, that figure includes a most intriguing accessory in what appears to be a magic lamp.

The new costume is quite an upgrade from the humble blue robes he’s rocked in his MCU appearances, with a belt now adorn with unidentified new trinkets. However, the big news here is that he’s looking more comic-accurate, now brandishing a version of the familiar chest symbol shaped like a cross with a demonic head and wings—a sartorial choice, sans the yellow gloves, taken straight from Steve Ditko’s classic rendition of the character. It certainly appears to be the realization of Stephen Strange’s crossing of a new threshold regarding his powers and arc as a character.

However, Strange will have at least one more new outfit to debut in Multiverse of Madness. Not to be outdone by Peter Parker’s array of outfits in Spider-Man: No Way Home, Strange will apparently don this streamlined black and red outfit for a look that’s being billed as “Defender Strange,” which might be a tongue-in-cheek reference to the character’s historical comic status as a member of The Defenders. Perhaps tellingly, this particular look is getting a deluxe Marvel Legends release, albeit one that’s exclusive to Target, justified for a higher price point by the inclusion of a teleporting effect.

While the Marvel Legends line has represented a vast array of characters from MCU films and television shows, Benedict Wong’s scene-stealing role as Wong, Strange’s magical mentor-turned-sidekick, was oddly without a figure. This remained the case after he put in memorable crossover appearances in Avengers: Infinity War/Endgame, and even the recent Shang-Chi and the Legend of the Ten Rings, in which a cameo saw him impressively teach The Incredible Hulk’s apparently-reformed main villain, Emil Blonsky/Abomination, valuable combat lessons. Well, we can officially check this most crucial of characters off the unmade list. Now, we’re just left with the simple question of why he comes with a sword.

Xochitl Gomez’s debut as Marvel’s multidimensional super-powered heroine, America Chavez, a.k.a. Miss America, will be accompanied with a Marvel Legends release. Thus, with the figure’s adornment of photo-real face-printing technology, we now know how the character will appear in Multiverse of Madness. Indeed, a jean jacket indicatively covered with stars and stripes complements black jeans and black-and-white high-tops. Otherwise, there’s nothing else of note—specifically related to the film’s plot—to discern with this figure.

Among the characters of 2016’s Doctor Strange, Chiwetel Ejiofor’s onscreen rendition of comic book villain Mordo remains a highlight, especially for the way in which it took the dastardly supervillain of Marvel Comics and injected him with nuance and identifiable motivations. Indeed, the character, who spent the first film as an antagonistic ally of sorts to our still-green, retired-surgeon magic conjurer, eventually came to a realization about the magical hierarchy that will inevitably pit him against Strange. This arc has apparently led Mordo, now billed as “Master Mordo,” to make some interesting upgrades since we last saw him, notably when it comes to his heretofore-short hair game, which now has him brandishing some lengthy dreadlocks.

Rintrah is in the Movie… Apparently

The biggest surprise of the Marvel Legends Multiverse of Madness wave is clearly its selected build-a-figure character, Rintrah. Without any context provided, we are left to assume that the character’s prominent presence in the wave tacitly confirms him as a film character. While previous Marvel Legends movie waves have selected non-movie characters for build-a-figures, the oversized collect-and-connect offering appears to brandish live-action aesthetics, notably in the robe he’s wearing, which appears to resemble the films’ sartorial standard issue for initiates at Kamar-Taj.

Thus, the figure’s robe is potentially revelatory for the other-dimensional-hailing sorcerer, who, in the comics, was one of Strange’s magical allies. Indeed, Rintrah, who debuted in 1986’s Doctor Strange Vol. 2 #80, arrived on the scene when returning a repaired Cloak of Levitation to Strange on behalf of his master, Enitharmon the Weaver. Rintrah would becom a valuable ally, especially when he served as a temporary bodily vessel for his astral form of a mortally wounded Strange. Eventually, Strange agreed to take Rintrah on as an apprentice, teaching him knowledge evocative of the Sorceror Supreme.

Of course, with the notion of Rintrah’s inclusion in the film not even 100% confirmed, the figure provides no substantive idea about the nature of his prospective involvement.

On a non-Marvel-Legends, but toy-related sidenote, images of a LEGO set for Multiverse of Madness leaked earlier this month, providing a glimpse of heroes in Strange, America and Wong battling Marvel Comics’ massive, tentacles-teeming cycloptic sea monster, Gargantos. With the creature having already been rumored to be featured in the film, the sight of the set all but confirmed its presence. Pertinently, those who have already seen Spider-Man: No Way Home, or have been exposed to leaked footage, are now privy to some intriguing teases included in the film. While we’d never be so cruel as to spoil such details, we can, in the very least, safely confirm that Gargantos’s presence in Multiverse of Madness for a climactic showdown is signed, sealed and delivered.

With that said, it will be interesting to catch the context behind the inclusion of the creature. It’s only banked a few appearances in the Marvel Comic lore, notably first appearing as an underwater threat tackled, appropriately, by Namor the Submariner. Will the creature be unleashed by way of the film’s eponymous madness-afflicted multiverse? Or, perhaps, will its presence be more locally-sourced to our own dimension, potentially facilitating the arrival of a more traditional Gargantos-tackler in Namor in the MCU? It may sound absurd, but this film remains a platform for infinite possibilities when it comes to stupendous secrets.

Doctor Strange in the Multiverse of Madness is currently scheduled to cross into theatrical dimensions on May 6, 2022.