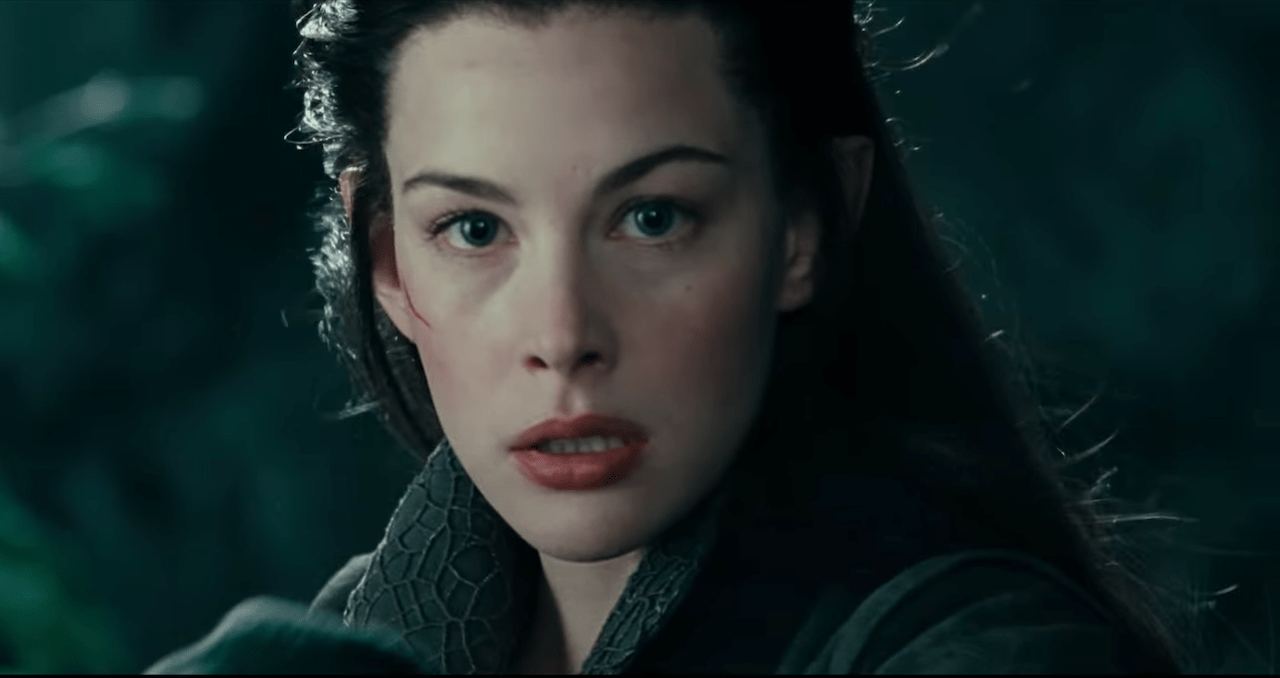 Peter Jackson’s adaptation of The Lord of the Rings: The Fellowship of the Ring has several standout sequences that anyone who saw it on the big screen surely remembers. There’s the opening battle sequence; the Ringwraiths sniffing for the hobbits as they cower under a tree root; the leap across the chasm from the collapsing staircase in the mines of Moria; Aragorn’s one-man-army stand against the Orcs at the Falls of Rauros.

But perhaps the best scene in the film is the furious chase sequence in which the Ringwraiths pursue Arwen (Liv Tyler) across the countryside as she races to get Frodo (Elijah Wood) to Rivendell before he succumbs to poisoning from a Morgul blade.

This scene is just as action-packed and thrilling as the staircase sequence, but without the slight feeling that the whole thing might be gravitationally impossible at the back of your mind. It’s as dramatic as the battle sequence in the prologue, but features a character audiences already know and love and care about, even if they haven’t read the books. It puts the Ringwraiths as close to Frodo as the sniffing sequence, but this time they can clearly see him as their hands reach out. It features one outnumbered hero battling the forces of evil just like Aragorn’s later scene, but the Ringwraiths, though fewer in number, are more deeply terrifying than any horde of Orcs.

Perhaps, though, the most impressive element about the sequence is how much it was reinvented for the screen.

Like the staircase sequence, this scene is a perfect example of book to screen adaptation, taking something that was arguably more peripheral in the book and expanding into something epically cinematic. The core events are fairly similar to the book version, as Frodo is put on a white elf-horse, carried away by the horse when the Black Riders attack, and saved when the river Bruinen rises to wash away and drown the Riders’ black horses. The basic outline, and the spirit of the sequence, are exactly the same. But the film adaptation made several significant changes to create an even more effective sequence for the screen, and certainly a more effective introduction for the character Arwen.

Indeed, the most significant difference from the novel is that the Elf who meets Strider and the hobbits near Bilbo’s stone trolls is not Arwen, as in the book, but a character named Glorfindel. At the time of the film’s release, this was a sore subject with some book fans. Glorfindel is a character from Tolkien’s wider Middle-earth mythology, appearing in various works but primarily, in published form, in The Silmarillion.

Tolkien brought him into the literary The Fellowship of the Ring in such an early draft that Frodo was still called Bingo, and Strider/Aragorn was still a hobbit called Trotter, who was originally intended to be a member of the Fellowship. Yet Trotter was removed when, in one draft, the Fellowship was reduced to Gandalf, a group of hobbits, and Boromir, and later replaced with Legolas (under the name Galdor) when the Elves were put back in.

These changes left Glorfindel with very little role in the books beyond this one sequence in which he turns up to help Frodo get to Rivendell. In a book, this isn’t too much of a problem. The Council of Elrond features numerous characters who don’t do much else in the story, not least Gimli’s father, Bilbo’s old companion Glóin. The presence of these characters brings home just what a Big Deal this meeting and the formation of the Fellowship is.

In a movie, however, it is not particularly effective storytelling to spend time introducing the audience to a brand new character, only for that character to disappear fifteen minutes later and never be seen or mentioned again. Frodo had to be rescued by one of the Elves we need to get to know for this story to work—that is, Elrond, Arwen, or Legolas.

Of the three, Arwen is clearly the logical choice. Legolas and Elrond have clearly defined roles in the story and see plenty of action (of the intellectual type in Elrond’s case) and character development. Arwen, on the other hand, is essential to the story, but in the book she is almost entirely lacking an actual plot  function or character arc.

Tolkien’s Arwen exists largely as a beautiful, distant figure who is practically presented to Aragorn as a prize in the finale. Their love story is relegated to the Appendices, and she does almost nothing throughout the entire story. (She might sew a banner at one point.) Meanwhile the reader is expected to empathize with Aragorn as he stays fiercely loyal to this completely absent, passive woman and ignores the advances of Éowyn throughout The Two Towers and The Return of the King.

Éowyn, remember, is an active, determined character who disguises herself as a man in order to fight for her people and ends up actually killing the Witch-King of Angmar himself. Movie audiences in 2001 to 2003 were not going to buy it.

For a film adaptation, replacing Glorfindel with Arwen was really a no-brainer. It gave Arwen a thrilling action sequence, allowing her a victory against the same enemy Éowyn would later kill, making the two women seem far more equal to each other. Fans of The Silmarillion were disappointed not to see Glorfindel represented on-screen because they loved him from that book, but in adapting just The Lord of the Rings, it made far more sense to use the sequence to introduce Arwen as Aragorn’s love interest, rather than spend time with a character we never meet again.

One final change the film made from the book was to put Arwen on the horse with Frodo. Glorfindel simply yells at the horse (Asfaloth, who really doesn’t get enough credit for his part in all this) to run, and Frodo is left to face the Black Riders alone until Elrond raises the river from a distance. But again, this would not work in a movie. Movie audiences need to understand what is happening in front of their eyes in order to feel excited, and not have it explained afterward. So in the movie, we see Arwen, as a lady of action, raise the river through an incantation and immediately understand what she’s doing. Although it’s a shame that Frodo loses some of his agency here, he has plenty to do later on, and his inability to act does emphasize how close to death he is during this scene.

Sam has been talking about how much he wants to meet Elves since the beginning of the story, and here, he has had to wait a long time before he even sees an Elf (as opposed to the extended edition, in which Frodo and Sam see some Elves in the Shire, and the book, in which they hang out with them for an evening). The lighting effects on Arwen as she appears out of the forest also highlight both the magical nature of Elves, and Frodo’s diminishing physical state. The audience are then introduced, in quick succession, to Arwen and Aragorn’s relationship, to the Elves’ lightness and speed, and to their magical powers over Nature. And all of it is conveyed with the urgency of a ticking clock given Frodo’s illness.

Beyond the clever adaptation, this sequence is also a beautiful piece of filmmaking. One of the impressive things about it is that it makes extensive use of stunt work. While we have nothing against the then-ground-breaking CGI effects used extensively throughout the trilogy, computer-generated effects never have quite the weight of physical stunts and effects, and they tend to age badly. Yet those Ringwraiths still look incredibly menacing on their black steeds as they bear down on Arwen and Frodo.

The cinematography, editing, sound design and music in the sequence are all phenomenal. Sweeping shots from high above emphasize Arwen’s smallness in the landscape, and how badly she, Frodo, and Asfaloth are outnumbered by the nine Ringwraiths on their own horses. The pounding of the horses’ feet raises the audience’s heart rate as the sequence and Howard Ashman score builds and builds, and then we see Arwen dart between trees to dodge the Riders, heightening the tension even more. Finally, the beautifully rendered horse shapes in the water of the river are a stunning bit of CGI to cap off the fantastic stunt sequence.

Tyler, likewise, is rarely given a moment so strong in the rest of the trilogy as she hisses with utter conviction in an extreme close-up, “If you want him, come and claim him!” With a look of complete command in that moment of the literal elements around her, and blood red scratch from a tree branch dripping on her face, audiences are instantly compelled to root for this character—which is crucial to following her and Aragorn’s stories since she becomes so much more tertiary in the subsequent films.

Dramatically, this is a scene that just gets more and more gripping each time you watch the trilogy. The first time you see the Black Riders sniff for the hobbits or chase Arwen and Frodo on Asfaloth, they’re scary. But once you’ve seen the rest of the story, and you’ve seen Mordor, and Sauron’s huge armies, and several important characters have died (and only one of them has come back again), and you’ve seen the total collapse, in a very literal sense, of Mordor after the Ring is destroyed—then this chase in which the Riders so very nearly catch Frodo and recover the Ring becomes almost more terrifying in retrospect.

There’s a moment when one of the Riders reaches out and very nearly touches Frodo’s face—that’s how close the world came to being destroyed in this scene.

I once caught this scene playing on all the televisions for sale in Curry’s, back in 2002 when the DVDs had only just come out, and stood there and watched it, hypnotized. I completely forgot about the kettle I’d come in to buy. It grabs you and keeps you glued to the screen until Frodo collapses in Arwen’s arms, only to wake up in the misty-screened safety of Rivendell. The Return of the King may have gotten all the official plaudits, but it was The Fellowship of the Ring that introduced cinema audiences not just to Middle-earth, but to the whole idea of proper, grown-up epic fantasy not based on the legends of King Arthur or a Greek myth.

This scene is just one of the standout scenes from a great movie, but it might just be the very best one.