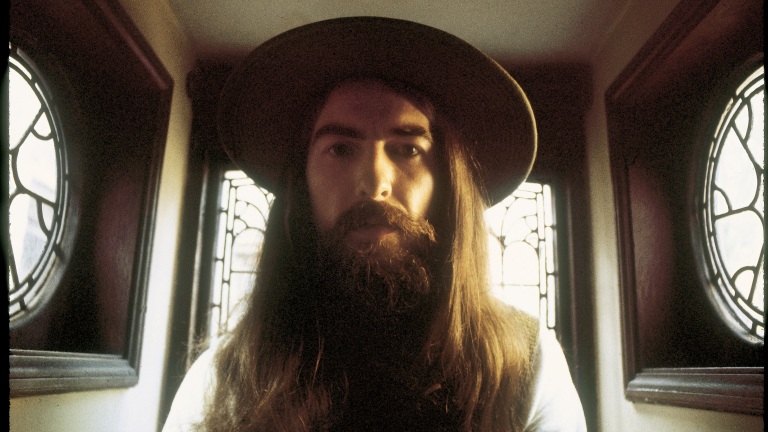 George Harrison’s “My Sweet Lord” was released on Nov. 23, 1970, as the first single to his groundbreaking and historic solo album. The Beatles were the first band to play stadium concerts, put backwards instrumentation into songs, and the first rock band to put sitar and tamboura drones in pop rock. But Harrison’s first solo release after the band’s break up, All Things Must Pass, was the first triple album coming from a single act in rock. “My Sweet Lord,” was the first number one hit by a solo Beatle and the biggest selling single of 1971. It is most renowned because of the trendsetting plagiarism suit around it, but the song transcends easy labels.

Which is why the new music video, directed by Lance Bangs, deserves a little more than an all-star cast and a de-Phil Spector’d remix. The 51st anniversary video stars Fred Armisen, Vanessa Bayer, and Mark Hamill. It also features George’s son Dhani Harrison and wife Olivia Harrison in small roles. Former Beatle Ringo Starr puts in an appearance as does ELO’s Jeff Lynne – who was in The Traveling Wilburys with Harrison. Rounding it out are about 40 cameos and parts including The Eagles’ Joe Walsh, Jon Hamm, “Weird Al” Yankovic, Natasha Legerro, Moshe Kasher, Darren Criss, Rosanna Arquette, Patton Oswalt, and Taiki Waititi.

You can watch the video here:

Besides the featured players, the music video also tells a story of special agents of a clandestine metaphysical agency searching for something unknown. The video is very Saturday Night Live-friendly, possibly because Harrison was the only Beatle who tried to cash the $3,000 check Lorne Michaels offered for a reunion show, but the story of the song is far more interesting.

As anyone who saw Peter Jackson’s The Beatles: Get Back, can attest, Harrison had a lot of songs which didn’t get on rotation against the great Lennon/McCartney songwriting team. It wasn’t that they didn’t listen, but there was just so much stuff coming out so quickly. While still in the Beatles, Harrison released Wonderwall Music, which was a soundtrack to a film, and Electronic Sound, which saw him as one of the early experimenters on the synthesizer. But he still had a backlog of songs. All Things Must Pass is rock’s first triple album set of original material and served up a spiritual celebration as well as one of independence.

It was also a major leap of faith.

“I thought a lot about whether to do ‘My Sweet Lord’ or not, because I would be committing myself publicly and I anticipated that a lot of people might get weird about it,” Harrison wrote in I Me Mine. The Beatles made headlines around the world when they studied Transcendental Meditation at the ashram of Maharishi Mahesh Yogi in India. When they left in a blur of bad vibes, which included Lennon’s stinging “Sexy Sadie,” critics tagged them as hippie faddists.

A Song of Spiritual Unity

Harrison heard Edwin Hawkins’ modern gospel rendition of the 18th century hymn “Oh Happy Day,” while on tour in the Delaney & Bonnie project and wanted to merge the feel of its joyous “Hallelujah” invocations with the devotional “Hare Krishna” Maha Mantra chants of Hinduism. In Martin Scorsese’s documentary The Material World, Harrison explains: “First, it’s simple. The thing about a mantra, they call it a mystical sound vibration encased in a syllable. It has this power within it. It’s just hypnotic.” The juxtaposition works as a subliminal affirmation of the universality of spiritual exploration.

But the song is steeped in gospel.

Harrison studied gospel music structure and composition while producing soul singer Doris Troy, and co-producing Billy Preston’s That’s The Way God Planned It. George also co-produced Preston’s fifth album Encouraging Words, which came out his September 1970 album, two months before All Things Must Pass, and included his version of “My Sweet Lord,” which has the Edwin Hawkins singers on backing vocals. The album included many of the musicians who appeared on All Things Must Pass, including Eric Clapton, Bobby Whitlock, Carl Radle, and Jim Gordon – the future Derek and the Dominos.

The Players and Recording

Besides containing the most recognizable examples of Harrison’s signature, post-Beatles, slide guitar playing, “My Sweet Lord” contained the best-known players of the day. It was recorded by Phil Spector at Abbey Road Studios, using the same equipment The Beatles used. For the session, Harrison assembled Preston, Clapton, Jim Gordon, and all four members of Badfinger, who were signed to Apple, Klaus Voormann on bass, and Gary Wright and Bobby Whitlock on additional keyboards. Ringo played tambourine, the drums were played by Andy White, who famously played drums on The Beatles’ first single “Love Me Do,” according to an interview he gave with Uncut magazine in 2020. Peter Frampton’s Do You Feel Like I Do? A Memoir confirms he was the lead guitarist on “My Sweet Lord” sessions. George’s slide guitar parts were overdubbed later at Trident Studios in central London.

Producer Phil Spector thought “My Sweet Lord” was the hit. George worried about how the public heard “Hare Krishna” and thought about orange-robed International Society for Krishna Consciousness devotees approaching them in airports. But the song was as infectious as it was subversive.

“Every time I put the radio on, it’s ‘Oh my Lord’,” John Lennon said in a 1970 interview, according to Nicholas Schaffner’s book The Beatles Forever. “I’m beginning to think there must be a God.”

Lennon is also the person who wrote the song “Instant Karma” and Harrison’s devotional epic suffered capitalistic backlash. He was the first artist to pay out legal fees for “subconscious plagiarism.” What was Harrison thinking? Well, it all depends on what he was listening to. In 1963, The Beatles conquered Europe and were waiting for a number one in the U.S. charts before they headed to America. Harrison probably heard The Chiffons’ “He’s So Fine.” Written by Ronald Mack produced by Bright Tunes Corporation, it spent four weeks at No. 1 that year. Doo lang doo lang doo-lang.

In February of 1971, Bright Tunes Music sued Harrison for plagiarism. Allen Klein suggested that Harrison buy Bright Tunes. The company declined, demanding a cut of the hit song. The trial took place February 23-25. Harrison testified he got the idea for the Hallelujah/Hare Krishna integration during a press conference following a show in Copenhagen, Denmark with Delaney and Bonnie in December 1969. He said the idea came from The Edwin Hawkins Singers’ “Oh Happy Day,” not “He’s So Fine.”

Harrison took his guitar to court. The plagiarism case centered on the musical motifs: “G-E-D” and “G-A-C-A-C,” which introduced the melody to the words “He’s So Fine, where it is repeated four times. “My Sweet Lord” repeats the first motif four times and the second one three times, because Harrison is always throwing seven in somewhere. He couldn’t name any other songs using the same melodic exact pattern off the top of his head, and the court ruled the two songs “virtually identical,” but unintentional. On Aug. 31, 1976, Harrison was found guilty of “subconscious plagiarism.”

Because “My Sweet Lord” was the lead single, and as big as it was, the judge ruled it represented 70% of the airplay for the entire All Things Must Pass album. Bright Tunes was awarded $1.6 million. Allen Klein’s company ABKCO bought Bright Tunes for $587,000 in 1978. Harrison sued. It went on until 1998 when Harrison got the rights to both songs in North America and the UK, and Klein owned them everywhere else.

The best thing to come out of it were the songs about it, which showed musicians had a sense of humor about it. Harrison recorded “Sue Me Sue You Blues” for his Living in the Material World,  and more pointedly, his 1976 single “This Song.” There was nothing Bright about it. Harrison even featured Eric Idle of Monty Python pondering “Could be ‘Sugar Pie Honey Bunch,’ No, sounds more like ‘Rescue Me,’” during the instrumental break.

Even The Chiffons got in on the joke, releasing their jazzy, flute-infused gospel version of “My Sweet Lord” in 1975. The Chiffons merged the two songs at the end, bringing out one more transcendent connection, singing, “My sweet lord, he’s so fine,” further capturing the very universality Harrison intended.

The Concert for Bangladesh was the first rock benefit concert and Harrison’s live version of “My Sweet Lord” was as uplifting as the studio recording. After Harrison died, “My Sweet Lord” was re-released in the U.K., where it again hit No. 1. The proceeds went to the Material World Charitable Foundation, which Harrison started in 1973.

All Things Must Pass 50th Anniversary Edition was released on Aug. 6.

Why Criminal Minds Shuffles its Cast So Frequently
Sci-Fi Short Film “The Kid” | DUST | Throwback Thursday
How Did the Cordyceps Infection Start In The Last of Us Games?
Dead Space Remake: Where to Find Every Schematic
HBO’s The Last of Us: The Changes to Bill’s Story and the “Parallel Universe” of TV