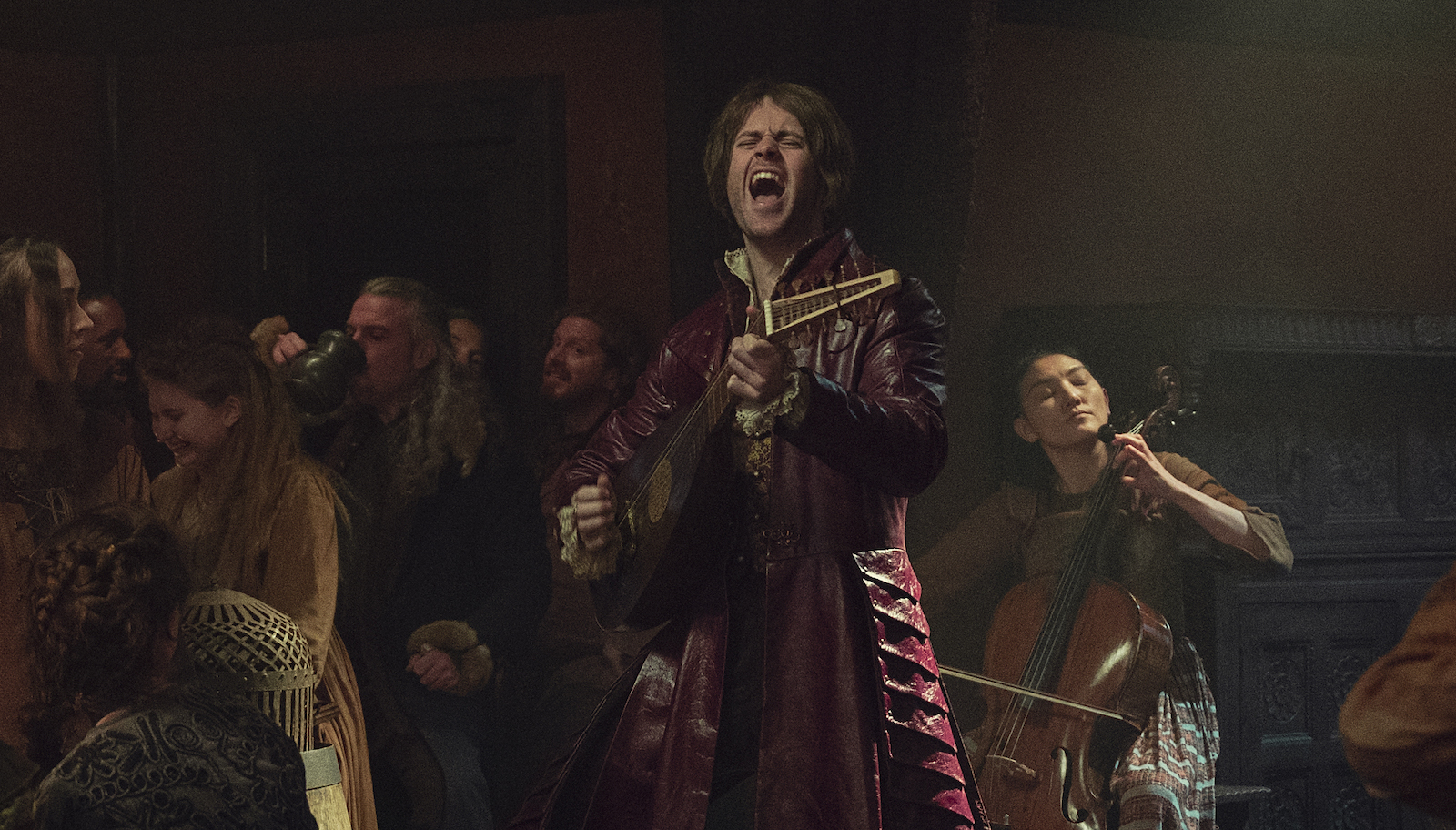 One of the standout accomplishments of the first season of The Witcher was the sheer addictiveness of the song, “Toss a Coin To Your Witcher” as sung by Joey Batey, who plays the bard Jaskier in the show. Now lightning has struck twice with the season 2 entry, “Burn, Butcher, Burn,” which is just as much of an earworm. Given that it’s been awhile since we last saw Jaskier, the circumstances related by the lyrics might have been forgotten by some. Why is the bard so pissed at his friend Geralt, who is clearly the subject of this rage anthem?

The Witcher viewers may recall that early in Geralt’s career, he unfairly earned the moniker “The Butcher of Blaviken,” referring to the blood the witcher was forced to shed during the feud between the mage Stregobor and the exiled princess Renfri, who lost her kingdom simply for being born during an eclipse. Geralt tried to persuade Renfri to set aside her revenge, but when her gang of mercenaries refused to yield, he defended himself and the innocent bystanders who later blamed him for the massacre.

Jaskier would know this particular nickname would be hurtful to his old friend, but it’s also an effective way to hide a true story in the lyrics of a song. “Burn, Butcher, Burn” begins with a reminder that the bard and the witcher parted under uncertain circumstances:

I hear you’re alive — how disappointing!
I’ve also survived, no thanks to you.
Did I not bring you some glee,
Mister ‘oh look at me’?
Now I’ll burn all the memories of you.

The last time the two were together, as Jaskier mentions in “Voleth Meir,” was when teams of fortune-seeking warriors traveled into the mountains to slay a dragon in the first season’s sixth episode, “Rare Species.” Jaskier spent much of the journey to the dragon’s lair trying to persuade Geralt to leave the quest and head with him to the coast, but the witcher was reluctant to do so, mostly because of Yennefer’s participation in the hunt but also because the bard was the source of much of Geralt’s problems.

“After everything we did, we saw / You turned your back on me,” says the song, and the pair certainly had their share of adventures. Earlier in The Witcher’s first season, Geralt and Jaskier had been captured by elves, and the bard had carelessly released a djinn that nearly killed them both as well as Yennefer. Jaskier was also responsible for Geralt being present at Princess Pavetta’s betrothal, during which the witcher claimed the Law of Surprise and ended up with a child of destiny.

In short, Geralt blamed his friend for everything that caused him angst in his life and thus left him in the camp before the dragon encounter ever unfolded. After that particular adventure was over and the witcher was still feeling stung by Yennefer’s rejection, he exclaimed that if life could give him one blessing, it would be to take Jaskier off his hands. Clearly hurt, the bard resigned himself to getting the story of the dragon from the other adventurers.

Perhaps Geralt should have remembered that if not for the encounter with the djinn, he might never have met Yennefer and joined his fate to hers. And although he initially rejected the idea of a child of destiny, he eventually formed a bond with Ciri crucial to her survival and his own fulfillment. Those all-important relationships would never have blossomed if not for Jaskier and the unfortunate circumstances that brought together the witcher, the princess, and the sorceress.

Although the friends eventually reconciled (“That’s what friends do; they come back,” the bard tells Geralt), it was quite poignant to see Jaskier feeling so hurt. His swanky outfit and confident demeanor show that the bard has earned a certain amount of fame in his own right, but he missed his friend and notoriety doesn’t equal happiness. The lyrics that lash out decrescendo into a very quiet, forlorn statement that proves that the bard could never actually rid himself of the painful memory of his friend’s rejection.

And now, we wait for the inevitable flood of YouTube covers of “Burn, Butcher, Burn!” Whether the interpretations are heavy metal or a cappella, they are sure to be as soulful as the original and just as much of a banger as “Toss a Coin To Your Witcher” was in the first season of The Witcher.