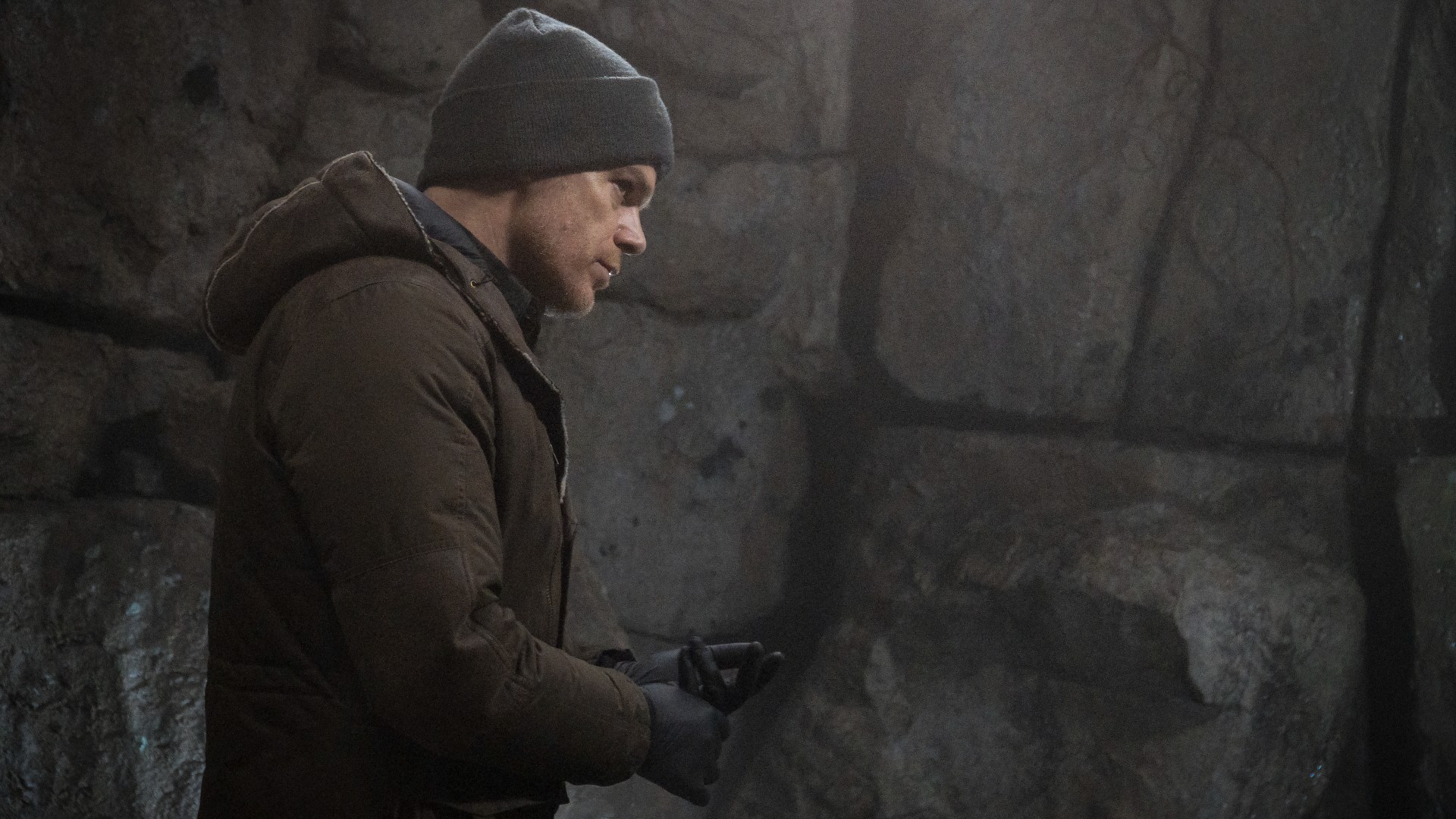 When it was announced that Dexter: New Blood would be eschewing the original series’ 13-episode format for a more streamlined 10-episode order, it was a sign that perhaps the new adventures of Dexter Morgan would improve upon areas where the original show’s run faltered. Almost every season of Dexter had more episodes to fill than plot to cover and that led to a lot of wheel spinning, false starts and stops, and needless procedural elements to pad out the season. By shaving off three unnecessary hours. Dexter: New Blood was giving itself the ability to be more immediate and focused.

However, 10 episodes for Dexter: New Blood still seem like too many. While each episode has had its moments to make them worthwhile, it’s clear that the Kurt Caldwell storyline is taking too long to get to its climax. Even when something momentous happens, like Angela and Molly sharing notes on “Jim” and Kurt (way later than it would have made sense to), or Kurt revealing that he knows Dexter was the one responsible for the disappearance of his son, understanding there’s still an additional three episodes to get through makes it clear that the foot is not actually on the gas, but idling on the brakes. Something tells me eight episodes is the perfect amount for a Dexter story such as the one that New Blood is trying to tell. You can almost feel the show trying to hold the story back.

Anyway, “Skin of Her Teeth” continues the trend of overall solid episodes. That said, the plot contrivances are starting to become too much. Convenient plot contrivances are part of the series’ DNA; Dexter is always gaining information from sheets of paper that should be private but are left right in the open, he’s always getting lucky with his timing, and there’s always the perfect distraction or scapegoat to get him out of trouble.

It’s why I didn’t flinch too much at Angel Batista popping up to inorganically deliver information to Angela about Dexter’s past; this series has always pulled this kind of shit. But Dexter finding skin in Iris’ corpse’s teeth 25 years after her disappearance sort of takes the cake for “C’mon now.” Still, if it helps move things along, so be it. And it is fun seeing Dexter back in his CSI roots again. Between this and Harrison’s incident with Ethan, I will give the writers credit for finding fun ways to incorporate this part of the character.

But Dexter as a character is wildly inconsistent these days. The show started by establishing that Dexter was a socially inept sociopath just barely blending in. Human interaction was always a weakness and why he set radars off for people like Doakes. That version of the character is alive and well when it comes to Dexter trying to have a father-son chat with Harrison, one that will keep him from running into the arms of Kurt Caldwell. Dexter doesn’t have the social tools to handle the kind of heart to heart that Harrison needs, but on the flipside, we know that Jim Lindsey has become an integral part of Iron Lake, beloved by the townsfolk and normal enough to shack up with the chief of police.

You may believe that Dexter has gotten better at blending in over the years, but in my eyes, the show presents him as a well-disguised monster or a barely concealed weirdo solely as it serves the show. The inconsistency even extends to Dexter’s inner consciousness, Deb. At the beginning of the season, she was begging Dexter not to kill, but now she’s chastising the police and suggesting that Kurt will only see justice from Dexter’s table. Perhaps it could all be explained away by Dexter’s long-dormant Dark Passenger waking up and throwing his life and behavior into chaos, but it scans as inconsistent writing. These are all thoughts that have been building that we brought out by specific examples in this episode.

Anyway, “Skin of Her Teeth” has plenty of good stuff too. The Dexter-Harrison dynamic continues to be the bright spot of the series. Dexter’s decision to let Angela handle Kurt instead of his typical brand of vigilantism, so that Harrison can see for himself who Kurt really is and avoid being abandoned by another person he cares about, is a smart, logical development that is eventually derailed by Kurt telling the police a bogus sob story and 25 years too late testimony about Iris encountering his abusive father.

Kurt’s real origin story is interesting to see play out, and his fake Iris sighting is apparently enough to get him released from custody despite the DNA evidence. Good news for Dexter though, who can now find reason to take care of Kurt himself. Kurt retrieved a titanium nail from Matt’s leg in the incinerator, so now the cat and mouse game between Kurt and Dexter has really popped off.

The episode’s best moment comes toward the end, when Harrison finally reveals his memory of what happened to Rita and the lingering dark thoughts and compulsions he feels. Jack Alcott has really helped elevate the Harrison material, keeping it natural and grounded. It’s such a well-measured performance and it’s a shame that most of the scenes between Alcott and Michael C. Hall have Harrison behaving distantly with short, stilted dialogue. The moment allows Dexter to see that he must come clean to his son.

It’s clear that Harrison needs a Harry-esque figure and Dexter hopefully can improve upon the lessons that his adopted father taught him. Unfortunately, exactly as Dexter is having this revelation, he’s attacked by Kurt’s nameless crony. I guess the show needed to give Dexter a person to go through before he and Kurt have their inevitable showdown, because hey, there’s three more episodes to fill!

“Skin of Her Teeth” has that classic “Two Steps Forward, One Step Back” Dexter feeling, but still manages to give great showcases to Alcott and Julia Jones, who is finally able to get closure about the Iris situation. It was also fun to see some new Trinity Killer footage, but I imagine John Lithgow signed on for more than just a quick topless scene. There are worse ways for this show to burn runtime.

Why Dragon Quest Has Always Been So Much More Popular In Japan
DC Movies and TV Shows: Full DCU Schedule
Pizza Tower Is the Best New Wario Land Game We’ll Probably Ever Get
Hogwarts Legacy Review Roundup: Is This the Dream Harry Potter Game?
Marvel Studios’ Ant-Man and The Wasp: Quantumania | Enter the Quantum Realm