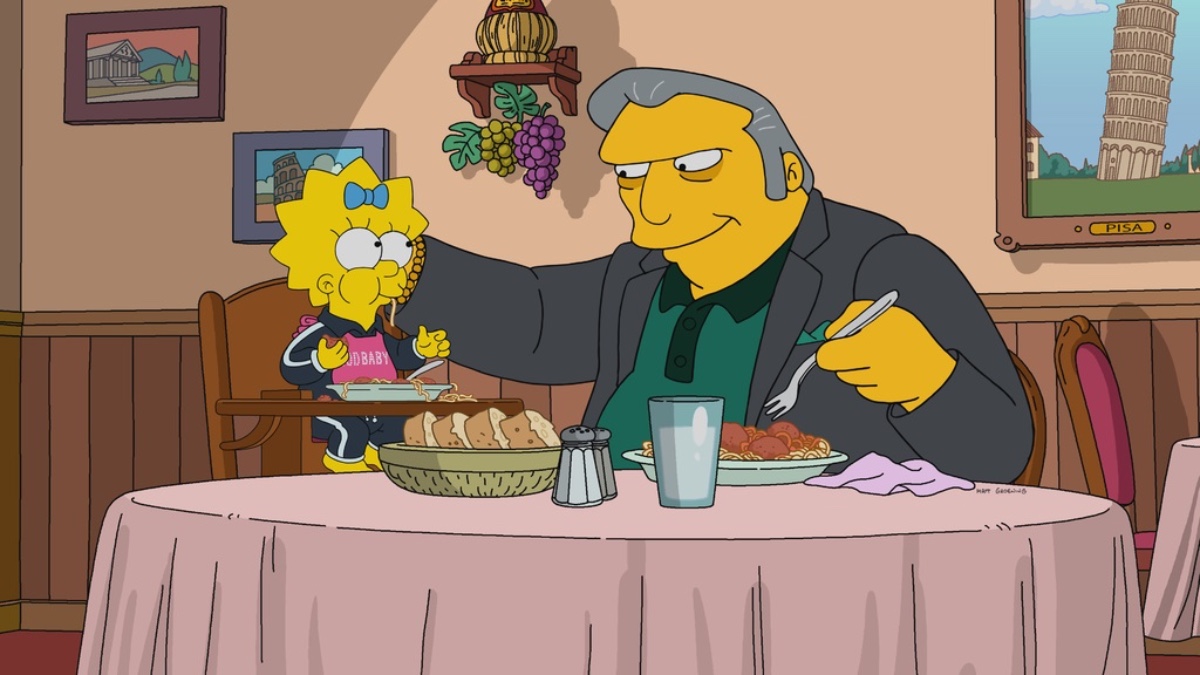 The Simpsons are still on a roll. Season 33 episode 10 “A Made Maggie” is a Christmas football in the groin: it works on so many levels. In short, Fat Tony gets himself an invitation to be godfather to Margaret Simpson, also known as little Maggie. If that sounds like a mob moniker for a street gang, it’s mere hearsay. The Simpsons live on Evergreen Terrace.

Earlier this season, The Simpsons created a modern classic, “A Serious Flanders,” by skewering the series Fargo. It was so good, not only was it a two-parter, but there is a director’s cut floating around looking for an excuse to be covered. It is a masterpiece of parody. It spoofs the series it honors. “A Made Maggie” is canon. It uses references to a film, The Godfather, but does not do its own take on it. As secondary source material, it is an endless well of original, non-parody, circumstances, and gags. That makes this episode a classic people will re-watch alongside perennial favorites like “Monorail,” or even the “Treehouse of Horrors” installments.

“A Made Maggie” works mostly because of the character development. Actually, it’s because every single line is perfect, even the set-ups are funny. But they work because we know the characters, both in the series and in The Godfather, so well, we are almost hardwired to get everything. But beyond that, each character develops dramatically during the episode. We even get to see a side of Johnny “Tightlips” we’ve never seen before. When he reverses his negatives, it is a positive, not the product of low-level educational rebellion. When he says he “doesn’t wanna do nothing to nobody,” it means he’s got to do something to somebody. It is an eye-opener.

When we first see Fat Tony, Homer calls him the classiest guy he knows. This is a man of respect, and the whole scene where Homer circumnavigates what Fat Tony does for a living is one of many amazing sequences, once again, because we know these two characters so well. But also, because we know Marge so well. She is fantastic in this episode, with a gradual slide into the corruption of incorruptibility, and has a presence with Homer whether she is in the scene or not during the entire installment.

This is ostensibly a Christmas episode, which are usually highpoints of any season. It opens with all the hallmarks of a good episode. There is no couch gag. That means the writers had too many jokes and couldn’t spare the time. Always watch for that, it is an unwritten rule there, because they cut the rule along with the couch gag. The other signal that a good episode is coming is when it veers from one story into the main dilemma. In this case, mocking Harry Potter, and all its residual merchandising. This also works as foreshadowing, because the Catholic Church, Fat Tony’s faith, has more merch than even God knows what to do with.

If Tony thinks his outfit is organized crime, he’s a mere amateur compared with the Grizzledums and Puffsenoughs (Puffinstuffs?), who roam the carnival streets beating on tourists because they’re seasonal workers and thereby entitled. One of the best zingers goes by very quickly: a sign on one of the rides which lists most of the usual precautions, no pregnant women and things like that, but also includes “no lawyers.”

While the Simpsons are enjoying the dragon petting zoo, Abe, or as he is known to the switchboard gals, Throwback 7244, is over-self-medicating on his anti-rambling prescription. While it is fun to hear a Martin Van Buren reference on modern TV, it’s a little disconcerting to see Maggie’s pacifier in the cat box. The story veers from needling a babysitter, to needing a baptism.

This is spurred by Ned, who has already had a run-in with the Simpson family on the baptism front, and now is booked solid for new ones. He is godfather to 1,100 children, a funny gag because we know it has to be true. Ned calls Hell, “Heaven’s basement.” We believe, but mainly because one of the baby-soul tortures is eternal play in an unsanitary ball-pit, at Arby’s no less. That’s indisputable.

The search-for-the-godfather sequence also works because of what we know, and sadly learn, about the prospects. Lenny’s first act is to offer the baby a sip of his beer, Barney can’t stand, Mr. Burns is allergic to new baby smell, and Moe is, well, Moe. We know him. We love him. But he’s half the reason Homer can never quite get to the church on time. We appreciate all of these characteristics, but the barrage of them also offers up the only real prospect, through the process of elimination, and of course a Laurel and Hardy tribute, which does it the honor of going one step further, and darker: “That’s another avoidable death you’ve gotten us into.” What a catchphrase.

The encounter outside the church is an act of fate you have to take on faith. Homer and Maggie are saved by someone whose beliefs are not like the “part time protestants” who “sleep through mass,” Fat Tony is not just an attender, but a knowledgeable believer. He knows in his heart, without a shred of doubt, that Mary, the sacred mother, was the only woman in history who had the oogotz to claim she was a virgin and the mother of God.

Fat Tony also knows about St. Lucia, and not only where his money is laundered. Every line is gold in this. You want to kiss his ring when he calls Maggie a cute little bambino. And when the FBI gets the whole thing on tape it again pierces through mere reference to brilliant satire. But it is very revealing how much he takes his obligation to Maggie seriously. He “made a promise to God, and that’s his only boss except that guy in Kansas City.”

The script, by Elisabeth Kiernan Averick, is nuanced, and overcrowded with both easy gags, and insanely original ones. “I broke out of prison for this,” a henchman says as he buries a soiled diaper. And that burial is as detailed, executed, and animated as Tommy’s interments in Goodfellas. When one of the gang has to obfuscate the already cryptic gangland language because there is a baby present, he says “how about we give him a boo-boo to the brain and he goes night-night forever,” and even that is too much for Tony, who demands to know “You give the kiss of death with that mouth?” Seriously, every line is great, and the turnarounds like “going into a legitimate legitimate business” are sublime.

The Godfather is a family film. It is about two families, criminal and related. The Simpsons is a family show. They are criminally related. So, when Fat Tony tries to actually go legit, based on his unabashed duty to little Maggie, it is a family business. His Bambino maternity-wear store is family-friendly, and not just to the family, but to every family. Except the Branzinosa family, which is a capper, but thrown off because it comes almost as an afterthought to what was building to a truly revealing and sweet scene. It doubles the laugh because it throws it away.

As diirected by Timothy Bailey, Maggie’s acclamation to life as a mafia princess is subtle, funny and a little too dangerous for preschool. But some of the lines in Fat Tony’s nursery rhymes are too on-the-twisted-nose. “Let me hotwire you a car,” “you’ll be my little alibi,” “I will change the plates, I know a guy,” are all amazing coming out of Joe Mantegna’s mouth. Fat Tony is one of the best of the smaller characters on the show, and so much of that is because of this characterization. Although, to be honest, the show has also given a very interesting arc to the least likely of his crew, Johnny Tightlips, here a betrayer, but for what, for him, are good reasons. This episode takes the time to think out all the angles.

Also, some of the smallest details, not having to do with mob double-talk, are brilliant plays on a gangland reality. Fat Tony gifts Maggie with a Ferrari ProtectoRossa car chair, and the SUV he leases in Marge’s name has a built-in humidor and a GPS that doesn’t think it’s better than you. The gangland assassination at the “Itchy and Scratchy Christmas On Ice” is as far away from The Godfather as possible.

“Why do people have such difficulty telling me people how great I am?” Fat Tony asks at one point, driving home how much of a caporegime he really is. This reviewer has no such difficulty. “Made Maggie” is a classic, perfectly executed crime of humor. Every line feels like it fell off the back of a tricycle. There is a sense the creative staff enjoyed putting this together, having fun which is infectious. It is subversively sweet and hysterical. There are no filler lines, and some of the killers are murder. When Marge says, in essence, so big deal: Fat Tony won’t be the godfather, Homer asks “have you seen The Godfather?” The Simpsons takes the cannoli on this one.