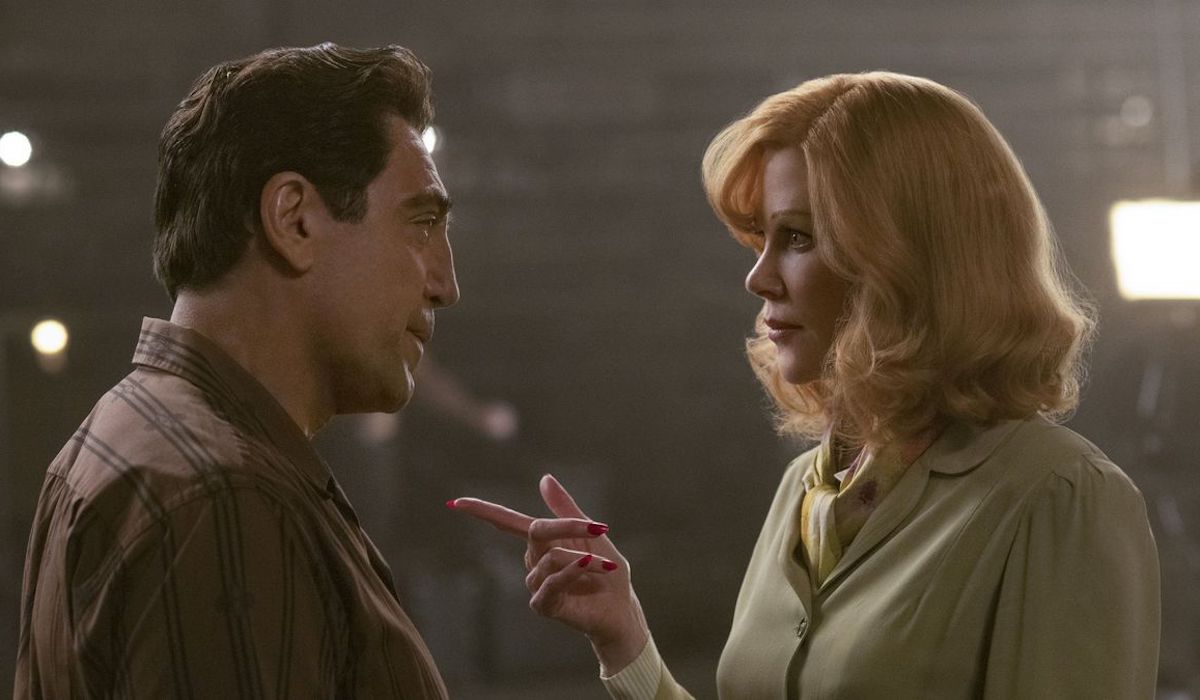 I Love Lucy remains the single most influential series in television history; there is perhaps not a single sitcom in the medium’s long existence that doesn’t owe some stylistic debt to the program, and its creation and development were groundbreaking in ways that we are still trying to catch up with in 2021. Yet the one thing you won’t really get from Being the Ricardos, writer-director Aaron Sorkin’s look at a week in the life of Lucy creators and stars, and real-life couple, Lucille Ball and Desi Arnaz, is a true sense of what the show was like, and how it was produced and written from week to week.

Oh sure, Being the Ricardos ostensibly takes place during the production of one episode, from the Monday table read of the script to the Friday taping of the show in front of a live audience, but it’s almost incidental to the many, many other crises and conflicts that Sorkin piles on in his script, which is filled with so many flashbacks and flash forwards that one soon becomes as dizzy as the Lucy Ricardo character whom Ball portrayed so brilliantly for six seasons in the 1950s.

In a way, the movie’s title is wildly inaccurate, because the film resolutely shows us Ball and Arnaz as mostly anything but the Ricardos. That’s not a slam on the film because this is a deliberate choice Sorkin makes, and the lives and careers of both these pioneers is clearly much more rich and interesting than the comedic archetypes they portray. But even with terrific performances from the main cast–Nicole Kidman as Ball, Javier Bardem as Arnaz, J.K. Simmons and Nina Arianda as co-stars William Frawley and Vivian Vance–it’s hard to get a sense of what story Sorkin is trying to tell.

The narrative hook on which Sorkin–who scored last year with the fiery The Trial of the Chicago 7–hangs his script is the good old Red Scare. Even though Ball had previously been cleared of any connection with the Communist Party, a tabloid dredges up old “evidence” of her allegedly pinko loyalties that spooks both the network and I Love Lucy’s sponsor (Philip Morris, nothing evil there), with the implied threat that the show could be pulled off the air.

But that’s not all: Ball also suspects that Arnaz is having an affair when he’s supposedly out playing cards with the boys every night; and she’s frustrated with the blocking of the show they’re about to shoot; and Frawley and Vance both have grievances to air. We know right off the bat that Arnaz is out getting some on the side–it’s just too obvious–but he’s also a charmer and a fierce protector of his wife and their shared creation. Ball, on the other hand, is somewhat more opaque even with strong work from Kidman. Meanwhile Simmons and Arianda breathe life into their loyal if aggravated co-stars.

Sprinkled throughout are flashbacks to various milestones in their lives, including when Arnaz and Ball first met (considering how relatively chaste I Love Lucy was–the Ricardos slept in separate beds–it might be startling to see how hot they were for each other), Ball’s early career in radio, and her insistence to network execs that her Cuban husband will star with her on Lucy, even though “mixed” marriages made the suits nervous.

Also woven into the movie are confusing documentary-style interviews with the “older” versions of Lucy producers and writers Jess Oppenheimer, Madelyn Pugh, and Bob Carroll Jr., played respectively by John Rubinstein, Linda Lavin, and Ronny Cox. It’s difficult to keep straight who is who, particularly with their “younger” selves played in the main body of the movie by different actors–Tony Hale, Alia Shawkat, and Jake Lacy, respectively. All the flash forwards do is recap basically what you’re watching in the “past,” making them superfluous and distracting.

But that’s the ultimate problem with Being the Ricardos: despite the hard work of its cast and Sorkin’s good intentions–his dialogue is as sharp as always and he never met a social issue he didn’t want to righteously incorporate into whatever script he’s working on–there are too many things happening at once for the viewer to get a real grip on who these people are, even if they’re among the most famous faces in pop culture history. (It also doesn’t help that Sorkin and cinematographer Jeff Cronenweth shoot most of the movie in dark offices or shadowy soundstages.) You may still love Lucy after watching this–as you should–but it’s hard to find a lot to love in Being the Ricardos.

Being the Ricardos premieres Tuesday, Dec. 21 on Amazon Prime.

The Most Underrated and Overlooked Games of 2022
Taskmaster Series 15 Line-Up Confirmed: Frankie Boyle, Jenny Eclair, Kiell Smith-Bynoe and more
Pokémon Scarlet and Violet: How to Beat the Charizard Tera Raid
Wednesday: What is a Hyde?
Yellowstone Season 5 Episode 5 Review: Watch ‘Em Ride Away