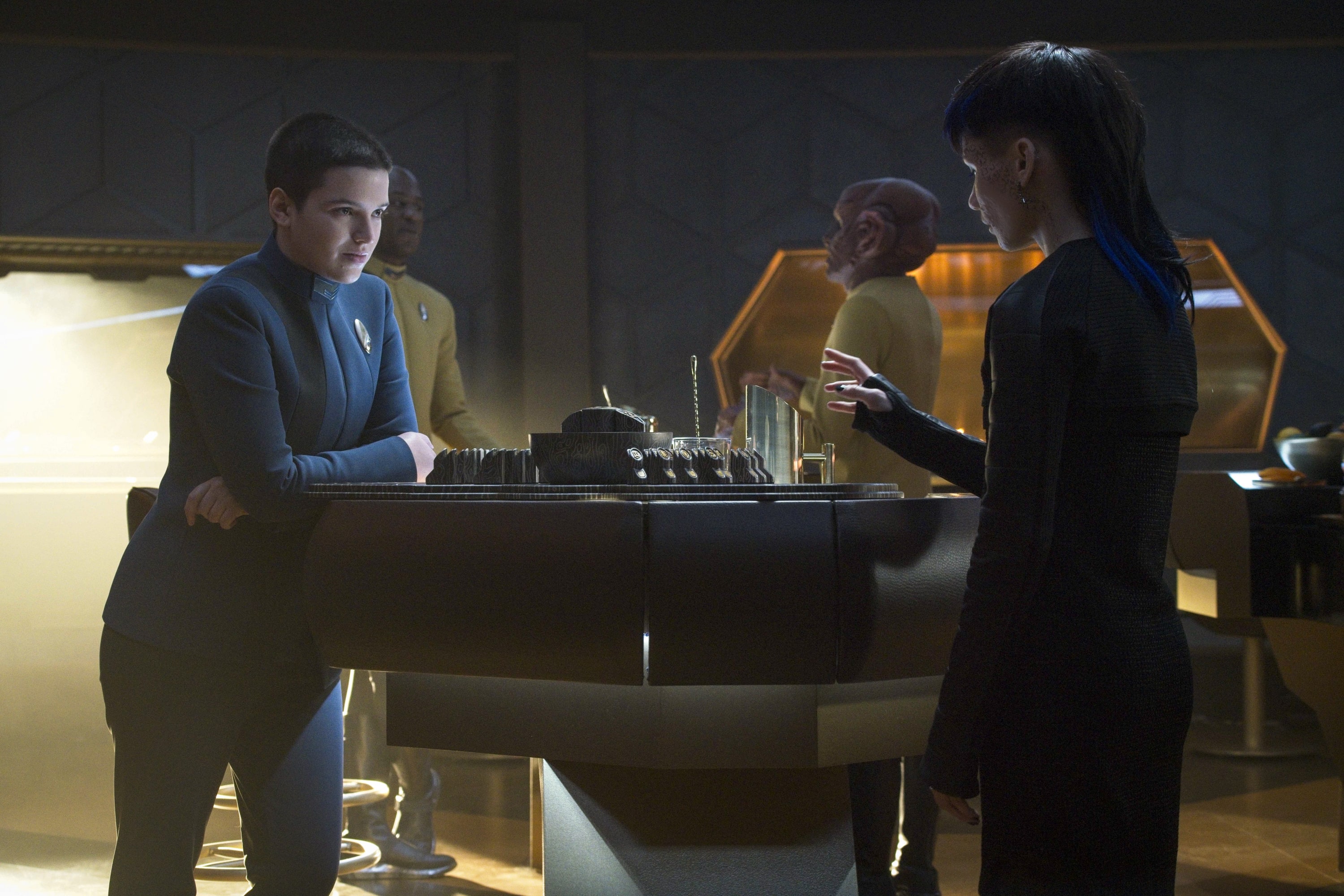 With “Stormy Weather,” Star Trek: Discovery celebrates the Trek tradition of getting some excellent musical standards into the bold voyages in the final frontier. With Picard, it was a call back to “Blue Skies,” but now, we’ve got a new version of the song made famous by Ella Fitzgerald, “Stormy Weather.” This version is sung by actress Annabelle Wallis, who has voiced “Zora” the intelligent DISCO computer since 2018’s Short Treks episode, “Calypso.” The newest Discovery episode obviously references that story a lot but what else? From galactic barriers to an old Scotty trick with the transporter, here’s every Easter egg and shout-out we spotted in Discovery Season 4, Episode 6, “Stormy Weather.”

In the opening moments of the episode, we see Burnham putting together a family tree, inspired by the Lalogi orb from the previous episode, “The Examples.” So, who is on Burnham’s family tree? Here’s what we spotted

Saru mentions the Enterprise and Voyager

Because DISCO is headed into a subspace rift, Saru gives Captain Burnham a history lesson saying that “an Enterprise noted heated plasma,” and Voyager chartered ionized particle eddies. These two shout-outs are a bit hard to pin down, but the Enterprise Saru is referring to that noted “heated plasma” could be the Enterprise-E in the film Star Trek: Insurrection. In that film, an Isolytic burst caused a “subspace tear.” That said, a “subspace rift,” could also refer to the TNG episode “Force of Nature,” in which it was learned that certain kinds of excessive warp speeds caused rifts in subspace. As far as Voyager goes, the best guesses here are “The Omega Directive” and “Cold Fire.”

That said, there is a contemporary Voyager-J in the present tense of Discovery right now in 3189. We don’t know if there’s a contemporary Enterprise. The point is, there has likely been a shitton of Enterprises and Voyagers in the 800 years between the TNG era and now. So, this may be an Easter egg to unseen adventures on Enterprises or Voyagers we’ve never even heard of.

Linus under a heating lamp

At more than one point in the episode, it’s mentioned that Linus is under a heating lamp. Quick Linus refresher: starting with Season 2, Linus is a crew member who is a Saurian, a reptilian alien species who was alluded to in The Original Series, and appeared as background characters in The Motion Picture. In Discovery, Linus is played by David Benjamin Tomlinson, but not in this episode, because we don’t see him.

Ferengi and Lurian in the bar

As with previous episodes of Discovery this season, the background action in the new ship’s lounge continues with the Deep Space Nine visual references. This time we get both a Ferengi AND a Lurian together in the bar, which clearly references Morn (a Lurian) and Quark and Rom (Ferengi) from the bar in DS9.

In order to illuminate the strange void near the subspace rift, the idea of using a “photonic flare” is suggested. This references the idea of using photon torpedoes as light sources, which happened in the TNG episode “In Theory,” and the Voyager episode “Night.”

The computer program we’ve been seeing in the credits for the past five episodes now makes sense. That’s what Zora looks like right now, at least, in her computer form. It should be noted, however, that this is not what Zora looks like in the future. In the Short Treks episode “Calypso,” we actually know that Zora will evolve a lot more than this, and what we’re seeing is, essentially, the beginning of that process.

Book’s father calls him by his “other” name

At several points, Book’s father refers to him as “Turex.” We’ve always known that “Cleavland Booker” wasn’t his “real” name but we haven’t actually been told why he chose that specific name after leaving his home planet. In the Season 3 episode “People of Earth,” Burnham mentions she “needs to get the story” of Book’s name, but we still don’t know!

“If we still used wires…”

Stamets makes a joke about a live wire, and then says “if we still used wires.” This implies that in the 32nd Century, there are no wires of any kind on starships. Is anyone going to hold Discovery to this canon? Please don’t!

A scan of Book’s brain reveals there are particles from the Galactic Barrier, which proves the DMA (Dark Matter Anomaly) comes from outside the Milky Way Galaxy. The idea of the Galactic Barrier in Trek canon originates with the TOS second pilot episode, “Where No Man Has Gone Before.” The Enterprise also left the galaxy in the episode “By Any Other Name,” when they were hijacked by the Kelvins, who also originated outside of the galaxy. Now, it feels very unlikely that DISCO is bringing back the Kelvins but…when you consider that the Guardian of Forever came back in Season 3, you just never know!

Putting Everyone Into the Pattern Buffer

The entire crew is protected from the radiation of the subspace rift by getting stored in “the pattern buffer.” To be clear, this means they are all beamed into the transporter, but not beamed out. We’re told that Starfleet records indicate that this can work out “long term,” which is a direct reference to the TNG episode “Relics,” in which Scotty was discovered in a pattern buffer, over seven decades after he put himself inside of it. Interestingly enough, the first person Scotty talked to when he was out of the pattern buffer was Riker, played by Jonathan Frakes, who directed this episode of Discovery.

This old-school plot device also sets up a way for Zora to do this for the crew again, which could explain why the ship appears abandoned in “Calypso.” But maybe not?

Owosekun mentions to Saru that she was unable to help a friend in her youth because the proper care wasn’t available. Saru comforts her saying she “bore witness,” to this sad event. Oddly enough, this touching moment contains a small Easter egg to Owo’s personal history and Jonathan Frakes.

In the Season 2 Discovery episode “New Eden,” it was established that Owosekun grew up in a “Luddite colony” that eschewed advanced technology. So, the origin of her story is probably connected to those in the colony not having the right tech or medicine to save this other person. This call back is doubly interesting because the person who directed “New Eden” was Jonathan Frakes, who also directed this episode. Is Jonathan Frakes advancing a secret plot to give Owosekun even more backstory! If so, he’s doing a great job.

Other Space | Comedy Sci-Fi Series | Coming Soon to DUST on TV
The Last of Us: How Long Does It Take to Beat the Games?
New Batman and Robin Movie, Green Lantern TV Show, and More Announced for Revamped DCU
The Last of Us: What Happens to Bill and Frank In the Game?
The Witcher Season 1 Episode 5 “Bottled Appetites” | AfterBuzz TV