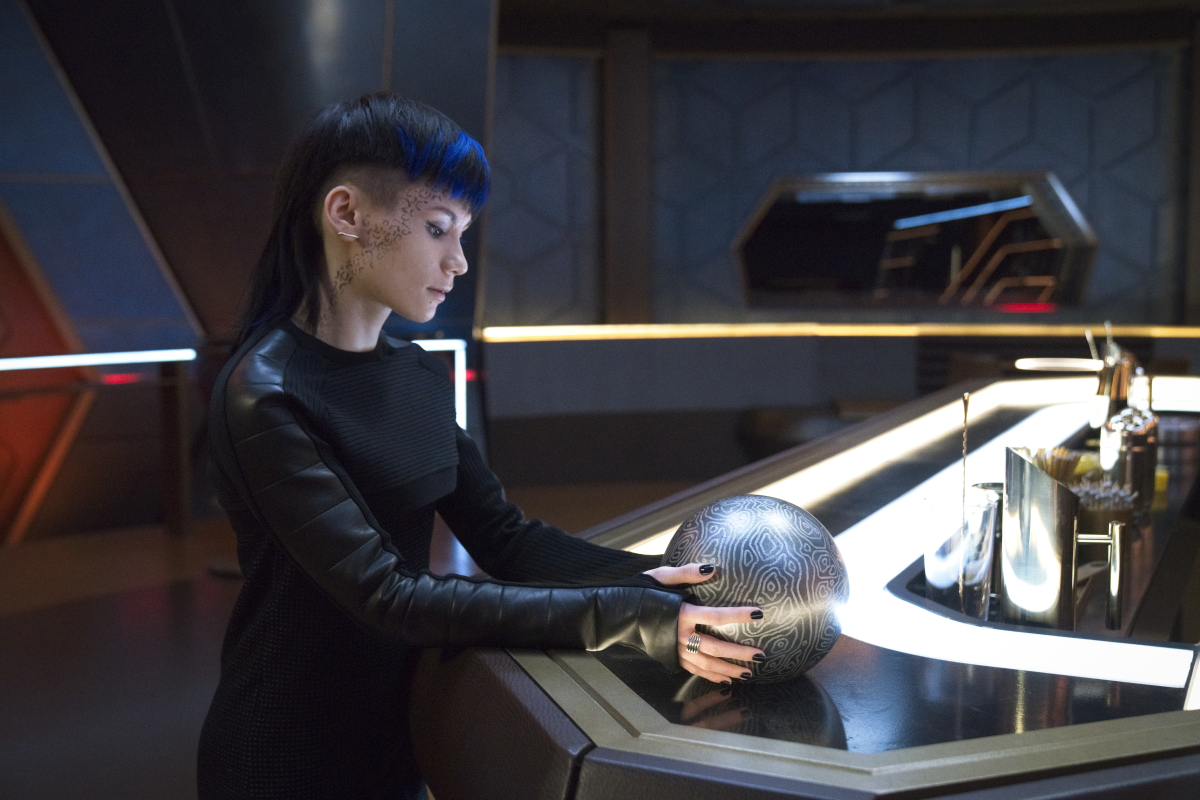 Star Trek: Discovery literally goes where no one has gone before in “Stormy Weather,” journeying into the subspace rift left behind by the DMA to try and suss out more information about what it is and how it works, in the hopes that such information might point them toward who created it. Instead, the Discovery and her crew all end up almost being eaten by some sort of inexplicable dark void that the DMA apparently leaves in its wake, and it’s only through some old-fashioned Earth communication that everyone is saved in the end.

It is admittedly less than ideal that both Starfleet and the Federation apparently think their best plan is to simply drive their most valuable asset into an unexplored space hole, but desperate times desperate measures and all that. (I assume they figured Discovery would be able to jump out if it encountered danger, which is at least a potential solution this episode takes pains to thwart.)

That said, “Stormy Weather” is still a pretty fun ride. There’s plenty of genuine tension, even though we all well know that the Discovery is not going to get destroyed before the ship makes it out of the rift, no matter how many flames burst across the bridge. (Plus: Commander Bryce coming to the rescue again with his old school Earth knowledge! The whole crew beaming into the pattern buffer! We love to see it.)

Maybe there’s something to be said for the bleak blackness of an unseeable and largely unknowable enemy, but there are aspects of this episode that feel like nothing so much as a horror film, as the bridge counts down their encroaching disintegration and the crew brainstorms desperate potential solutions to their predicament. Truly, I did not expect to get emotional over the apparent dying screams of a tiny Wall-E-esque drone, but here I am. 2021 has obviously done a number on me.

“Stormy Weather” is an episode that’s rather heavy on the Star Trek science and I will freely admit that I zoned out a bit while Stamets and Culber were waxing rhapsodic about the energy in Book’s brain. (Yay, Book’s not dead! His dad hallucination is really annoying!) What is interesting is that this all essentially confirms that whatever made the DMA is not of our galaxy. Thanks to the presence of a convenient “galactic barrier” (read: plot device) around the Milky Way, Star Trek hasn’t done that many stories that deal with extragalactic threats or species, and this basically means virtually anything could be happening here.

Is the DMA a mistake, an out-of-control experiment that tore into our galaxy by accident? (Unlikely, someone’s still driving the thing.) Is it a weapon, sent to destroy planets and wreck civilizations in this galaxy as the first wave of an invasion? Is it (conspiracy theory alert) somehow being controlled by the Federation, desperate to rebuild its numbers and prove its worth in a world that’s gotten well used to living without it?

Stamets seems confident that more data can be gleaned from the energy particles that passed through Book and the spore drive, and I am willing to let him do that if it means this story can finally move forward in some significant way. The revelation that the DMA is of extragalactic origin is intriguing, even if it does put the kibosh on my pet theory that it was somehow created or at least controlled by a person or group we would recognize. So I just hope this all actually leads somewhere good (or that’s at least worth all this build-up) in the coming weeks.

Elsewhere, the question of what’s been happening with sentient computer Zora has been quietly percolating in the background of Discovery since fairly early on in Season 3—really, since the 2018 Short Treks episode “Calypso,” which is set 1,000 years in the future—with no clear answers as to how the machine is evolving or what said evolution means. In “The Examples,” it becomes clear that Zora can experience something very like human emotion, and “Stormy Weather” takes that up to eleven, showing us that the computer is capable of feeling fear, becoming overwhelmed by the sheer volume of her unfulfilled daily tasks, and generally just stressing out all over the place. (Zora is extremely relatable to modern viewers right now, is what I’m saying.)

It’s a bit strange that Michael isn’t more concerned about the fact that her ship’s computer is basically becoming Skynet, and the episode pulled back from her (in my view, quite right) skeptical and mistrustful view of Zora’s intentions much too quickly. Maybe near-death experiences bond everyone, even when one is human and the other a supercomputer. Perhaps in the 32nd century, hundreds of years after Data existed and when consciousnesses can be easily transferred between host bodies, this isn’t as weird as it seems. But seeing how dedicated the Discovery crew is to finding any scrap of data they can about both the void they’re trapped in and the DMA generally, it certainly seems bizarre that they’re all just sort of shrugging at the idea that, hey, the computer is suddenly having some big feelings.

Even if Zora doesn’t turn out to be a threat (and, to be fair, it’s really only the fact that I’ve consumed way too much science fiction over the years to be anything but suspicious of something that acquires consciousness unexpectedly), shouldn’t someone want to know how this happened? Or at least ask some existential questions about the state of her soul?

Plus, as great as I think most of these actors are—and as much variety and depth as Annabelle Wallis puts into the voice of the computer—it’s just difficult to watch them act opposite what is essentially a fancy blue Microsoft screen while staring into the middle distance. (This in combination with the “enemy” being a dark void you couldn’t see, well. Your imagination had to do a lot of work in this episode.)

On the plus side, however, Discovery does draw some interesting parallels between Zora’s awakening and Gray’s adjustment to his new body. I’ve been wondering what the show really planned to do with Gray in Season 4, and in many respects, I’m still unsure—there has to be something more to this character than his relationship with Adira. But Gray’s conversation (and game) with Zora is probably the most I’ve been interested in this character for his own sake in quite some time, and that feels like a solid first step toward establishing what, precisely, he’s meant to do on this canvas.