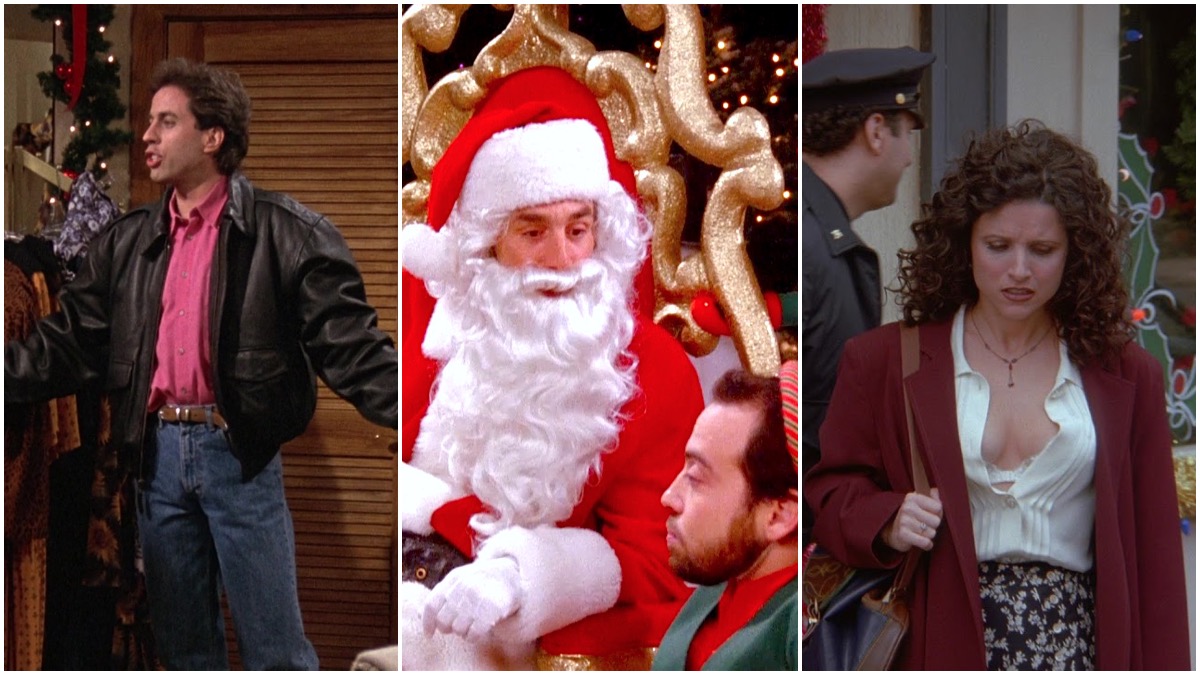 Seinfeld’s classic anti-holiday episode “The Strike” has been re-gifted so many times it is almost as annoying as the holiday itself. We’re taking a strike from Festivus, because that non-holiday was only one of the many moments Jerry and the gang destroyed festivities in ways black and white cookies could never fix.

Jerry (Jerry Seinfeld), Elaine (Julia Louis-Dreyfus), George (Jason Alexander), and Kramer (Michael Richards), have soiled baptisms, weddings, anniversaries, Thanksgiving dinners, Puerto Rican Day marches, and even Super Bowl parties, which gave birth to the very phrase “re-gifting.” They’ve mugged old ladies for chocolate babkas, punctured the Woody Woodpecker balloon in the Macy’s Day Parade, and even convinced a tenant association to pass on upgrading an apartment to a survivor of the Andrea Doria shipwreck during the holiday season. Without an airing of grievances, the rest of us are pretty much covered, and it doesn’t take a feat of strength from “The Strike” to wrench the tinsel from the Seinfeld anti-holiday tradition.

We unwrap five holiday classics which have nothing to do with mounting an aluminum pole:

Speaking of strikes, when Kramer gets the coveted job as Coleman’s Department Store’s annual Santa Claus, with Mickey Abbott (Danny Woodburn) as his elf, the first thing he does after “eight hours of jingle-belling and ho-ho-hoing,” is call one. Elaine’s boyfriend, Ned (Todd Kimsey), is a Communist (just look at his shirt), and when he tells Kramer about how much a rival store is paying their Santas, the man in the red suit sees and goes Red. While it might be because his fake beard itches, the Christmas spirit is about giving, and Kramer gives it to Coleman’s, pushing pinko propaganda to the children on his knee.

But Kramer gives the greatest gift of the episode to Jerry, who is dating a woman named Lois, not Lane, but it gives him an excuse to throw a Superman line into every conversation. Her boss, Duncan Meyer (Don McManus), a Lex Luthor-stand-in, lost a race to Jerry in high school. He threatens to fire Lois if Jerry won’t agree to a redo. Because of Kramer, the long-held grudge match backfires like a toy car assembled by sweatshop kids.

The title of “The Pick,” doesn’t refer to the revealingly festive picture Elaine sends out for the holidays, but about noses, and what separates a scratch from a pick, and how far you have to dig to get rid of a date. “Oh, but look at what we have here, a Christmas card from Lainey,” Jerry says before he inspects the photo, taken by amateur photographer Kramer. How hard is it to take a picture? He not only catches her best side, he catches the part of Elaine which women spend their “whole life going through painstaking efforts to hide.” It is what Jerry passes off as “a little brown circular protuberance.” But which Newman (Wayne Knight) pegs in what might be his deadpan best 13 seconds on the series: “Your nipple is showing.”

While it turns out to be the best gift Elaine’s 10-year-old nephew gets all year, it’s not such a treat for most of the other recipients, which include her Nana and Papa, a nun, and her religious boyfriend. By the end of the episode, everyone at the office is calling Elaine “Nip,” and the only one who never gets to see it is George. “You want a Christmas card,” Elaine demands to know before shoving his face in her blouse. Kramer pays everything forward to Calvin Klein (Nicholas Hormann) in a photobomb of his own.

“The Red Dot” is a full-on Christmas episode. It is named for the tiny stain on the present George buys Elaine for getting him a job at Pendant Publishing: a beautiful cashmere sweater which she calls “one of the nicest things anyone has ever given me.” Who doesn’t love cashmere?  The sweater has its own arc in the episode, as Elaine tracks down the clearance sale root of the seemingly selfless gift. That fine piece of fabric goes from Elaine to the publishing company’s cleaning lady, who gets it from George because of an ulterior motive. He doesn’t want her to tell the bosses they’ve been having sex on his desk after office hours.

Well, once she gets a look at that red blemish on the beautiful sweater, she gets George fired. But he does get to go to the office Christmas party, where Jerry lifts the spirits of Elaine’s boyfriend, who is a recovering alcoholic who shouldn’t indulge in any spirits, and ultimately gets heckled for it. “Was that wrong? Should I not have done that?” On the wagon or off, “The Red Dot” makes for a less-than-White Christmas episode with a dangerously anti-holiday finale.

“Now this is what the holidays are all about: three buddies, sitting around chewing gum,” Kramer rejoices in “The Gum.” He is giving back to the community by renovating the vacant Alex Theatre with Elaine’s ex-boyfriend Lloyd Braun (Matt McCoy). He recently recovered from a nervous breakdown, and while the episode is fairly light on Christmas settings, he does bring the gum. It’s not just any gum, Jerry loves the stuff, and Lloyd knows a guy in Chinatown who can get the chewy sweet stuff cheap.

George’s holiday doesn’t go quite so sweetly. He delivers his parents’ Christmas presents to their apartment. He does it while they are out, so he can drop them off without having to see them. But while he’s there, neighborhood character “Pop” Lazzari tinkers with George’s car, the convertible that once belonged to John Voight, not the actor. It doesn’t go well, and neither does his trip to Monk’s Café, where he thinks the cashier, played by Ruthie Cohen, rips him off. At least she wishes George a “Merry Christmas.” It happens right after his car catches on fire, but it’s the thought that counts. Kramer also offers seasonal greetings, but you can tell his mind’s not on it. All George has to say is, “Whatever.”

“The Millenium” isn’t about Christmas, but we are treated to a view of George Steinbrenner (Larry David) in his underwear. The episode is about New Year’s, and not just any New Year’s. Kramer and Newman are each planning rival millennium Eve parties for Dec. 31, 1999. While this is technically wrong, as Jerry explains the actual millennium begins in 2001, since there was no year zero, making Dec. 31, 2000, the technical millennium New Year’s Eve, Kramer is setting up chairs anyway. He’s got 200 of them and quite a bit of ice, the good stuff, “cubed.” The party is still two years away, and he’s very prepared, and quite reluctant to change his plans.

The sinister mailman, however, tells Kramer he “started planning this in 1978. I put a deposit down on that revolving restaurant that overlooks Times Square, and I booked Christopher Cross.” Ultimately, they join forces to throw a “Newmanium” party. Jerry, of course, is not invited. Elaine is invited, however, but throws a Y2K bug into Newman’s ultimate plan: to catch Elaine at the midnight hour. He is forced to invite Jerry.