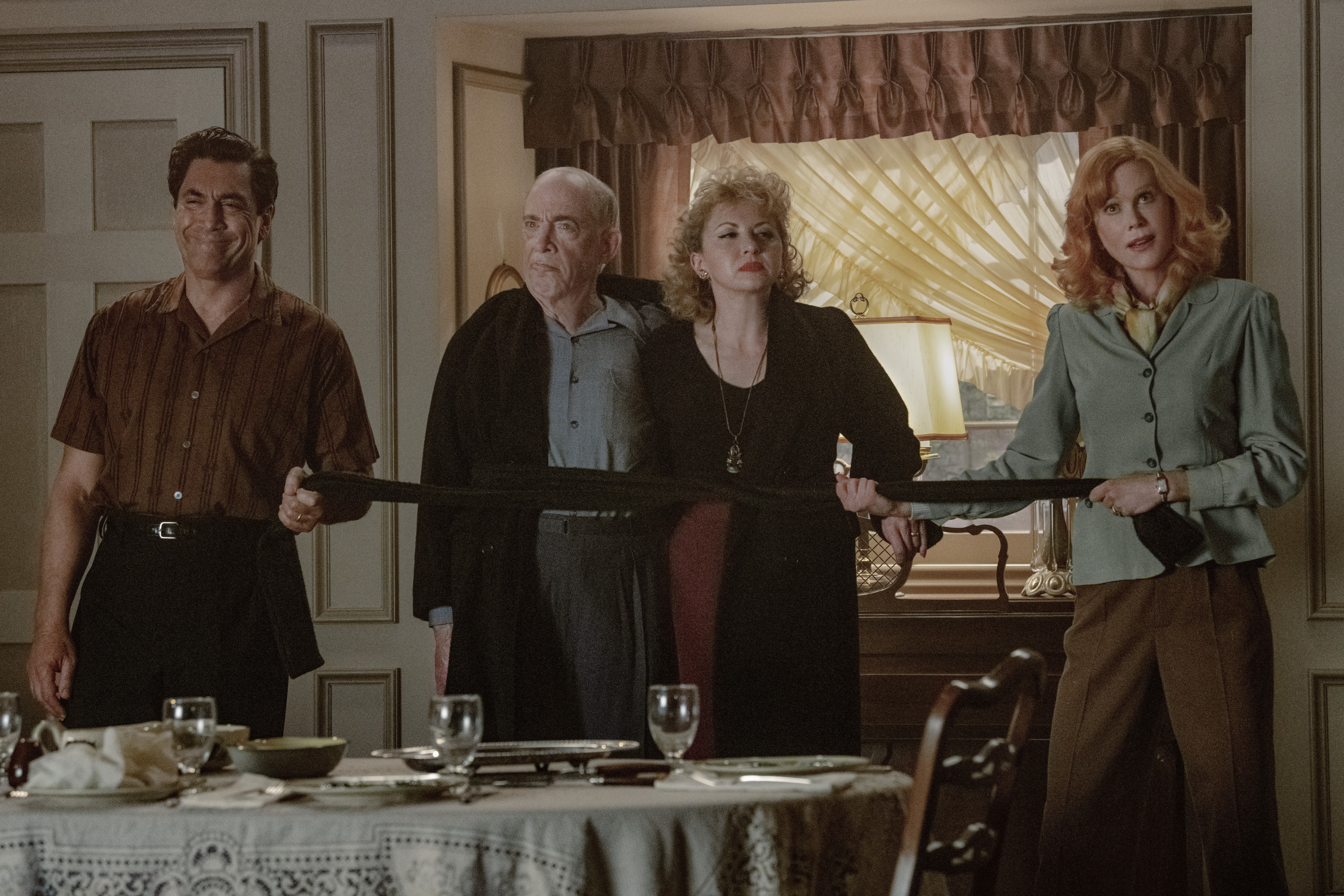 Oscar-winning actor J.K. Simmons has very vivid memories of watching the classic TV sitcom I Love Lucy when he was a child.

“I can’t say I remember the first time I saw it,” he recalls. “But as I’ve said before, I’m the only cast member who was born when I Love Lucy was still on the air, the original series. I think I was born during Season 4 and absolutely grew up on it. It was on my parents’ crappy little black and white TV when I was a preschooler and in elementary school. And of course the show’s never been off the air. So I think everybody, even people who are my kids’ age, have been able to say that they grew up watching I Love Lucy because it’s always been there.”

Decades later, Simmons–who’s also in theaters this month in Spider-Man: No Way Home–is starring in Being the Ricardos, a new movie from writer-director Aaron Sorkin about the tumultuous lives and careers of I Love Lucy stars and producers, Lucille Ball (Nicole Kidman) and Desi Arnaz (Javier Bardem). Simmons plays William Frawley, who co-starred on the show as the Ricardos’ landlord and neighbor, the cantankerous Fred Mertz (Nina Arianda plays Vivian Vance, who portrayed Fred’s wife Ethel).

There’s not a wealth of information about Frawley out there these days, as Simmons found out when he began to research the role.

“There was less out there about him, because he was a more private person in general,” says Simmons. “Really wasn’t much of a showbiz guy outside of going to work. Desi Arnaz really was, I think, his only close friend in the business. Other than that, he hung out with ballplayers, golfers, jockeys, and barflies. He didn’t write books, and he didn’t do a lot of talk shows and this and that. There were no kids or grandkids of his to speak to.”

While Simmons was able to glean information on Frawley from books by or about Desi Arnaz and Vivian Vance themselves, Sorkin had no such issues in obtaining information about Arnaz and Lucille Ball, who became perhaps the most famous on-screen couple in TV history, even as their marriage was sliding toward dissolution.

I Love Lucy has been cited as the most influential series ever to air on television, and certainly its impact on the structure, format and production style of sitcoms to this day is evident everywhere. But Lucy was groundbreaking in ways that even now seem incredible in the context of the era (the 1950s) in which the show appeared.

Ball, who started out as a model, began a film career in 1933 that kept her steadily working despite never elevating her to the level of a headlining star. She nevertheless became known for her comic skills and physical humor, with the former put to work in a CBS radio program called My Favorite Husband. When CBS expressed interest in taking Husband to television, Ball insisted that her real-life husband–Cuban bandleader Desi Arnaz, whom she eloped with in 1940 after a whirlwind courtship–play her spouse on-screen as well.

The network of course was nervous about basing a show on a couple with “mixed backgrounds.” But this became the first of many creative and business battles that the headstrong and tough Ball, with Arnaz behind her, fought. And they paid off since I Love Lucy was a gigantic hit, with Ball as the dizzy, endlessly ambitious Lucy and Arnaz as her exasperated husband Ricky becoming pop culture icons familiar to millions to this day.

Sorkin says he first met with producer Todd Black about writing a movie about Ball and Arnaz “four or five years ago,” and it was at their first meeting that Sorkin discovered the little-known fact about Ball that became the hook for his script.

“I didn’t know that she had been accused of being a communist,” he recalls. “After that first meeting, I just wanted to find out if I was the only one who didn’t know that she was accused of being a communist. I asked around and it seemed like nobody knew, and that was kind of interesting. So we would meet maybe once a month, once every two months and at each of these meetings, he would give me more information about them that I found interesting.”

Sorkin says that what surprised him the most about Ball and Arnaz “even though it shouldn’t have” was “how different the two of them were from the iconic characters that they were playing.” He continues, “I discovered that there are many, many people who are intensely passionate about not Lucille Ball and Desi Arnaz, but Lucy and Ricky Ricardo, and think they’re the same people. When we’re asked to think of Lucille ball, we think of Lucy Ricardo, just like when we’re asked to think of Charlie Chaplin, we think of the Little Tramp, even though Charlie Chaplin didn’t look anything like the Little Tramp.”

It was the assistance of Lucie Arnaz, the real-life daughter of Ball and Desi Arnaz, who provided Sorkin with private home movies of the family’s life, which fully committed Sorkin to writing and eventually directing the project.

“In these home movies, they’re sitting around the pool and Lucy is barely recognizable because she’s a knockout, she’s a Rita Hayworth-level knockout,” he says. “In the 1950s, a woman couldn’t have any hint of sexiness on TV. But it wasn’t just the physicality. It was their personalities. I think what really hooked me in is that the two of them were so deeply in love with each other and yet couldn’t make it work, that there were these kind of hairline fractures built into both of their biographies and personalities that were going to prevent them from living happily ever after.”

He continues, “I got it into my head that if I could tell a story that took place entirely during one production week of I Love Lucy, Monday table read to Friday audience taping, there might be something there. I had basically collected enough points of friction between Lucy and Desi, between Lucy and Vivian Vance, between all the characters that I felt like I had enough to write a good screenplay.”

Which brings us around to the “Lucy was a communist” shocker again. Although Ball did register to vote as a member of the Communist Party in 1936, she claimed in sealed 1953 testimony to the House Un-American Activities Committee–the sordid Congressional entity that rounded up names for the Hollywood blacklist–that she registered at the insistence of her grandfather, who was a socialist. While there are more details to the story, she was cleared. At least until the accusation was brought up during the filming of I Love Lucy’s third season.

“Other than a death in the family, you can’t imagine a bigger crisis for an actor, a writer, a director, anyone in the movie business in 1953,” says Sorkin. “Lucy came very close to being literally cancelled, and there were a lot of parallels to what we see today. The crime, if you will, that she committed 16 years earlier… was for a benign reason. She wanted to honor her grandpa, Fred, who had raised her since she was four. And she was going to literally get cancelled for it. So I liked that. I also think that reminding ourselves here in Hollywood about the blacklist from time to time is a good idea.”

While the main thrust of the narrative in Being the Ricardos is about how Ball and Arnaz are going to handle the blacklist threat and save their show, Sorkin says that the other aspects of the couple’s success with Lucy–the groundbreaking nature of the show–were what he wanted to emphasize as well.

“[It was] as groundbreaking as can be,” proclaims Sorkin about the show now. “And I think that anyone who has ever done a half-hour comedy has been walking in the footprints that Lucy and Desi laid. But Lucy also insisted that Desi play her husband simply because she thought it would save her marriage. It wasn’t about, ‘Hey, this is a great idea doing I Love Lucy.’ It was, ‘I can get Desi off the road with his orchestra. We’ll see each other.’ Lucy had a real yearning for domesticity and she took on very powerful forces like CBS and Philip Morris Tobacco. This was an interracial couple on TV, which was unheard of.”

Most importantly, concludes Sorkin, he hopes that viewers come away from watching Being the Ricardos with a better understanding of the incredibly talented actors and creators who made I Love Lucy the cultural landmark that it is today.

“Mostly, I want [audiences] to have had a good time for the two hours that we’ve asked for their attention in the theater,” he says. “But beyond that, I want them to know that Lucy and Desi, and Bill and Vivian, are considerably more complicated than the characters we know and love on TV. I think that’s a good thing. I think it celebrates who we are.”

Being the Ricardos is streaming now on Amazon Prime Video.

The Ark’s Sci-Fi Tropes Are ‘There For a Reason’
Hogwarts Legacy Review Roundup: Is This the Dream Harry Potter Game?
DC Movies and TV Shows: Full DCU Schedule
How to Find a PS5 and Xbox Series X In 2023
Arrow Season 6 Episode 16 Review & Reaction | AfterBuzz TV