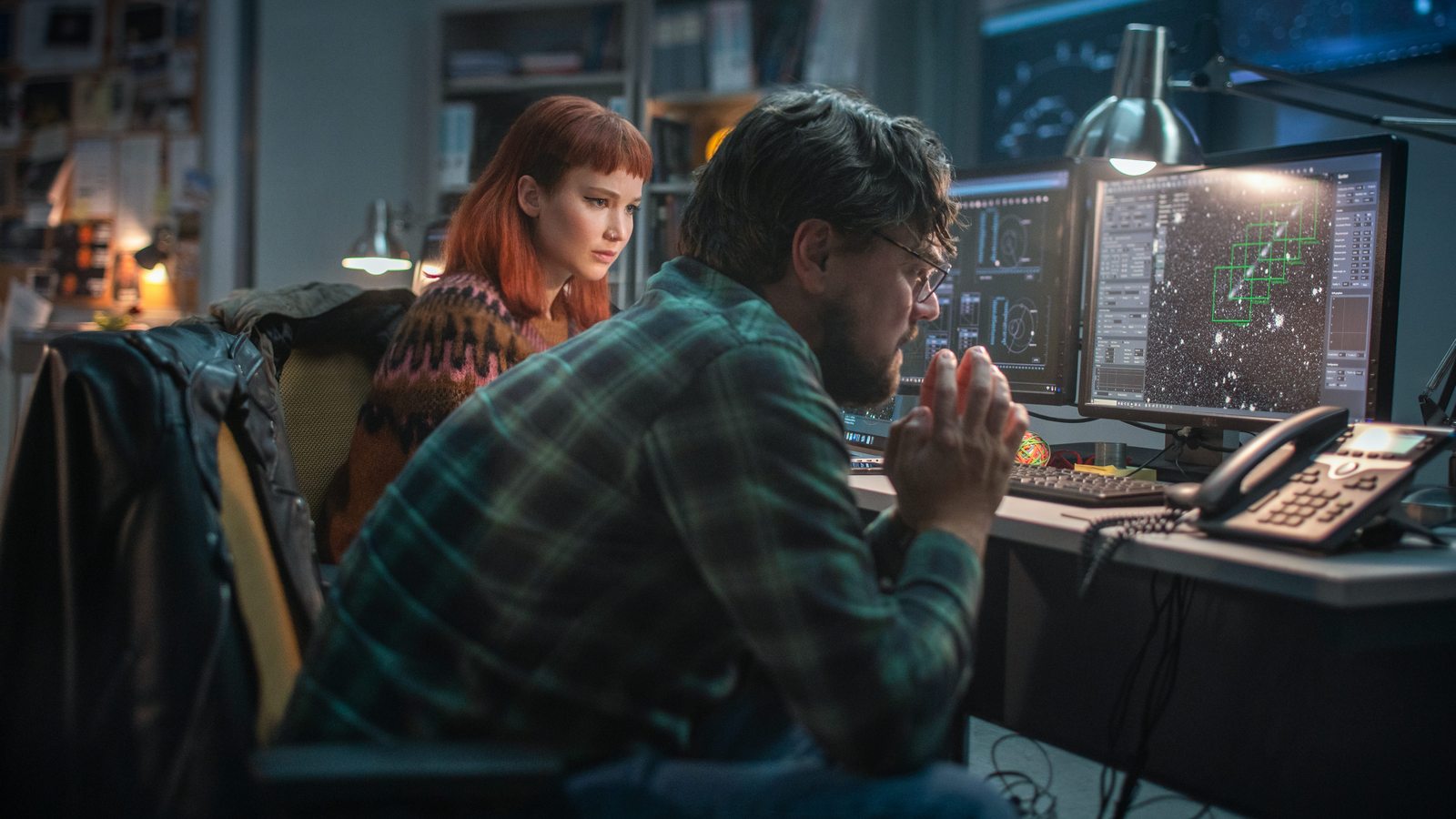 In Don’t Look Up, the frequently searing new satire from filmmaker Adam McKay (Vice, The Big Short), astronomers Randall Mindy (Leonardo DiCaprio) and Kate Dibiasky (Jennifer Lawrence) discover that a previously undetected comet is headed straight for Earth, with six months to go before the object slams into the planet in what will be an extinction level event.

As time runs out, the scientists plead their case to the ignorant, self-obsessed President Janie Orlean (Meryl Streep) and her vile son/chief of staff, Jason (Jonah Hill), who dismiss them. It’s only when Orlean gets caught up in a sex scandal that she brings the comet to national attention as a diversion and plans–some good, some nefarious–are finally set in motion to stop the comet from wiping out humanity.

Reactions to Don’t Look Up so far are mixed, with some critics finding it heavy-handed while others declare it on point, especially in its gender-swapped portrayal of a Commander-in-Chief much like the disgraceful example we had in the Oval Office until last January. But the movie nevertheless raises several important issues, including how exactly we would respond to the potential end of human civilization and, perhaps most crucially, whether an event like this is possible or even imminent.

For the answer to the latter, we spoke with Dr. Amy Mainzer, the top science consultant on the film. Formerly a senior research scientist at NASA’s Jet Propulsion Laboratory in California, Dr. Mainzer is now a professor of planetary science at the University of Arizona who specializes in the study of asteroids and comets, especially ones that approach Earth.

In fact, when we hop on Zoom with Dr. Mainzer around the time that Don’t Look Up is beginning a limited theatrical run, it’s just after an asteroid named 4660 Nereus, approximately 1,100 feet long, has passed the Earth at a distance of around 2.4 million miles.

“It’s a near-earth object,” Dr. Mainzer informs us. “These kinds of close approaches do happen very often, so it’s not a particularly uncommon thing to happen. But in this case, the object is a little bit on the larger side. Its orbit is really well known, so it had no chance of actually having any sort of collision, which is great.”

It sure is. But whether there are more objects like Nereus out there that continually whiz by the Earth–and if one could not just speed past us but smash into the planet–is the question at the center of Don’t Look Up.

“Those kinds of close approaches we think happen fairly often,” says Dr. Mainzer. “But in the case of that object, it is one that we actually know about and we know where it is, and we know its orbit very well. But for a lot of the objects that are in that size category, we simply don’t know where they are. We haven’t discovered them yet. So we clearly have our work cut out for us to go and discover the majority of the objects that really are big enough to cause what I would call severe regional damage.”

For Don’t Look Up, Dr. Mainzer says she was contacted a few years back by writer-director Adam McKay when he first began working on the project. Once he described what he had in mind, she says she was “super excited” to help out any way she could.

“We talked about absolutely everything under the sun on this project,” she says about her responsibilities on the movie. “It was really great to be involved with all different aspects of it, everything from costume design to just the basic premise. What sort of an object would it be? Would it be an asteroid or a comet? How do we highlight the film’s points that we’re trying to make about the importance of science, and science denialism, and how harmful that is to the culture of science? We covered everything from the importance of the peer review process to the visual effects.”

The decision about what kind of object would be approaching the Earth in the film was based on realistic ideas about the size, speed, and energy level needed to create a catastrophic planet-wide event.

“I deliberately picked an object that is a long-period comet,” says Dr. Mainzer. “It’s a comet that comes from the outer part of the solar system, and these objects really do come in with incredible velocity with respect to the Earth. They can be very large. I kind of loosely modeled the object after comet NEOWISE, which our team discovered last year.”

Dr. Mainzer continues, “There can sometimes be a very short gap from when we find one of these things to when they make their closest approach to the Sun, because they move so fast… In the case of comet NEOWISE, we found the object in late March and by early July, it was already making its close approach to the Sun. So in this case, six months from discovery to close approach or [in the movie] impact is pretty realistic for this class of object.”

The doctor adds that they went with a comet over an asteroid for the movie because “they really are pretty large, a lot of these long-period comets, and they can move really fast,” adding, “that kind of fit the needs of the story in this particular case. And it’s certainly a class of objects that we want to keep an eye out for, even though it’s just incredibly unlikely that one would ever actually hit the Earth because space is so big.”

One aspect of working on Don’t Look Up that Dr. Mainzer found both encouragingly refreshing was the passion and knowledge that the actors themselves brought to the subject, and their interest in getting this kind of cautionary tale–even one done in satirical terms–to the public.

“Leo and I were probably on the phone dozens of times, just going through some of his difficult scenes,” says the doctor about the film’s star, who’s already a dedicated climate change activist. “There’s one scene in particular in the movie where he finally, really gets to speak his mind. We talked about this a lot, and I told him, ‘You really have to speak for scientists because we need to be heard, and we feel like we’re not being heard. So just let it all out.’ A few times he said to me, ‘Go for it.’ and I would just say everything I wanted to say. We really tried to pack that into that one moment in the movie.”

In fact, the difficulty DiCaprio’s character has in making dimwits like President Orlean or the vacant morning show hosts played by Cate Blanchett and Tyler Perry understand the danger of the situation also sadly mirrors real-life experiences endured by Dr. Mainzer and her colleagues.

“It’s really challenging sometimes to communicate science,” she says. “Part of it is a linguistics challenge, because we use terminology that means something very specific in mathematical terms and in science, yet in everyday life, it can mean something almost completely different.”

She continues, “But I also think we really want people to know and love and understand science because it’s so important to our day-to-day lives. Even if we don’t really think about it or don’t really recognize it, science is governing pretty much everything that happens all the time. It’s always at work. It determines how the world works. The physical laws of the universe are just that. So it’s important for all of us to understand how things work, because otherwise we can’t make good decisions.”

There is a long stretch of Don’t Look Up in which science denialism comes into the picture, with politicians and other influential people literally pretending that the comet is not going to hit the Earth. As funny as it is, it’s also frustrating in light of the ignorance and denial we continue to see about long-term problems like climate change and more recent ones, such as the COVID-19 pandemic, with people still refusing to get vaccinated or take simple steps like wear masks.

“This has happened a number of times in my career,” says Dr. Mainzer about running into intellectual brick walls. “I know it’s happened to a lot of my colleagues, where you see examples of scientists just really being marginalized, either by conspiracy theories or by special interests… That’s really not good for anybody because as messy as the scientific process is, it is the best thing that we’ve got for basically being able to get the best answers.”

While Don’t Look Up doesn’t end well for the human race, Dr. Mainzer says that the current lack of belief in science is what keeps her up at night much more than whether an asteroid is going to suddenly slam into the Earth and pulverize us into so much dust.

“The asteroid problem, we can solve,” she says. “If we go and do the very good kind of basic astronomy of just going out and looking for the objects and counting them carefully and monitoring their orbits, we can solve that. But I think the bigger problem, the thing that really does keep me up at night, is that we as a society have to trust in science. We have to be better educated about science overall.”

She says in conclusion, “It doesn’t mean every person has to be a scientist–that’s not the point at all. It’s that we need, as a society, to know enough about science to be able to use the tools of critical thinking and hypothesis testing, and peer review to be able to make good decisions on a whole host of issues. We need to be a scientifically literate society. We really do.”

Don’t Look Up is now streaming on Netflix.