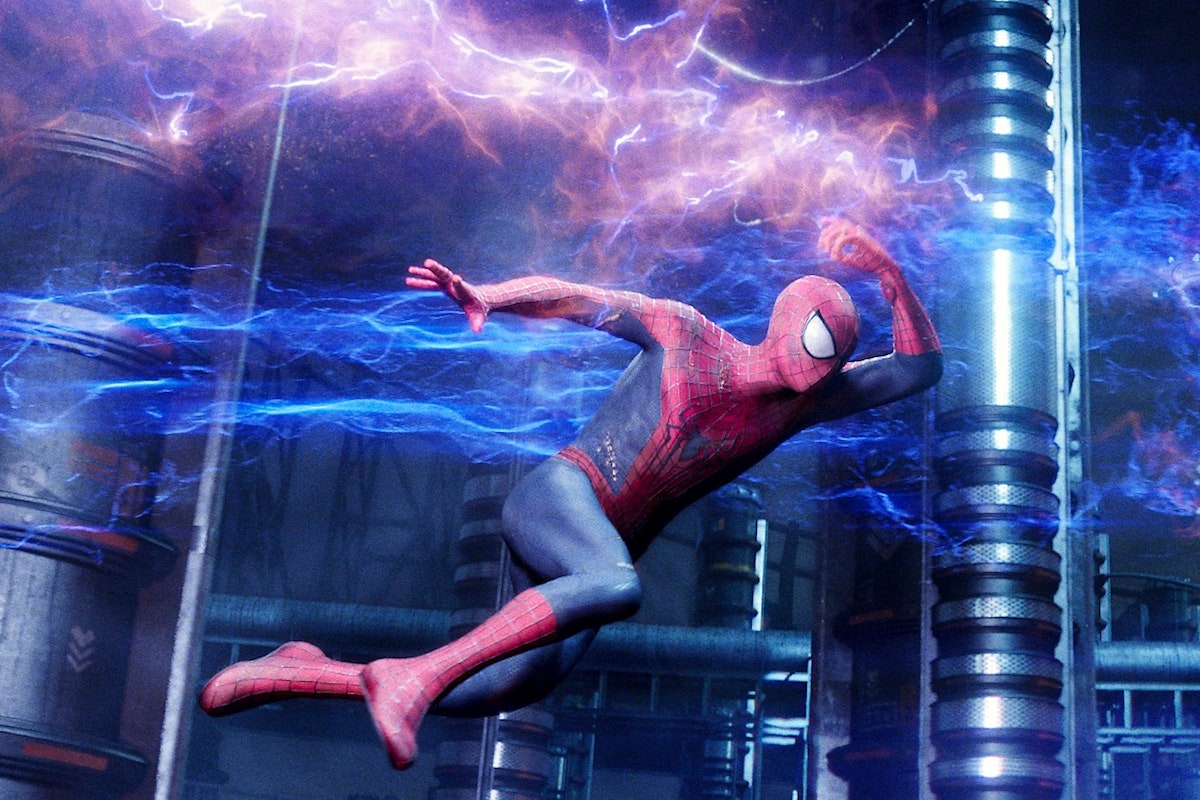 On another Earth, somewhere in the countless strands of reality in the multiverse, The Amazing Spider-Man 3 opened in theaters on June 10, 2016.

The film would have followed 2014’s The Amazing Spider-Man 2 and might well have marked the end of both Andrew Garfield’s tenure in the suit and director Marc Webb’s behind the camera.

But while Garfield and Webb did both exit the Spider-Man franchise–at least until now for Garfield–it was instead the prior film that proved to be both men’s swan song. As for The Amazing Spider-Man 3, despite an ever-shifting array of writers, ideas and release dates, it never happened–much to the possible relief of an increasingly frustrated but ultimately grateful fan base.

The reasons why we never got The Amazing Spider-Man 3 are many, but perhaps the primary factor, as it always seems to be in Hollywood, was money.

Arriving five years after the end of the Tobey Maguire/Sam Raimi era of Spider-Man movies, which was capped by 2007’s critically divisive Spider-Man 3 earning a healthy $895 million worldwide, 2012’s The Amazing Spider-Man introduced Garfield as Peter Parker, retold the origin story yet again and managed to haul in a very respectable $758 million at the box office–not as much as the Maguire movies, but still profitable and seen as a win considering it was a full-fledged reboot of the franchise.

The Amazing Spider-Man 2 was supposed to build on that, with Garfield established in the role and a slate of new villains designed to begin building out what Sony Pictures (then, as now, the rights-holders to Spider-Man and associated characters) hoped would become a Spider-Man Cinematic Universe–even if it was based around one superhero (Spidey) and a whole slew of supervillains.

But The Amazing Spider-Man 2 fell prey to the greedy kind of Hollywood thinking that prefers shared universes to spring up instantly instead of letting them slowly take root and grow. It’s why The Amazing Spider-Man 2 is overstuffed with villains (Electro, New Goblin, Rhino), tangled up in plotlines, and how it could still find room to jam one of the most iconic moments in comic book history (the death of Gwen Stacy, played here by Emma Stone) into one film. It also deliberately introduced characters and story beats only to leave them dangling as sequel bait. The movie was subsequently dismissed as a mess by most critics and even some audience members. It earned both the series’ lowest Rotten Tomatoes score (52 percent) and its smallest box office ($709 million).

Now, let’s be clear: $709 million isn’t chump change, and the film still turned a profit. But it barely crossed $200 million in North America–a big, red, flashing warning sign for a movie and franchise of this size. Plus the overall box office of the series was headed in the wrong direction. Spider-Man was in trouble. Before this turn of events, the studio assumed success was already in the bag, and Sony had announced The Amazing Spider-Man 3 would release on June 10, 2016, and The Amazing Spider-Man 4 would follow on May 4, 2018.

What Was The Amazing Spider-Man 3 and The Sinister Six Supposed to Be?

At the end of The Amazing Spider-Man 2, a depressed Peter Parker, despondent over the death of Gwen Stacy at the hands of Harry Osborn/New Goblin (Dane DeHaan), quits being Spider-Man. Meanwhile, ensconced in prison, Harry puts plans in motion to start a new team of villains, beginning with Russian gangster Aleksei Sytsevich (Paul Giamatti).

Equipped with a monstrous armored suit and calling himself the Rhino, Sytsevich rampages through the streets of New York City. The film ends with a recharged Spidey taking him on.

From glimpses in the Oscorp lab of suits for Vulture and Doctor Octopus, plus a deleted scene in which the cryogenically preserved head of the supposedly deceased Norman Osborn (Chris Cooper) is shown to be alive, the implication throughout TASM2 was that plans to create the famous Sinister Six–a half dozen of Spidey’s most lethal enemies, all on one team–were in motion for the future.

It was never really ascertained who the third film’s main villain would be (a restored Green Goblin was likely), but Paul Giamatti did confirm that he had signed to return as the Rhino. There were also unconfirmed reports that Gwen Stacy would somehow be resurrected, although that too remained a sketchy proposition. While all signs indicated that TASM3 would begin assembling the pieces of the Sinister Six for a potential showdown in a fourth film, Sony made things even more confusing by announcing that Daredevil showrunner Drew Goddard was going to write and direct a Sinister Six movie set in the same universe.

Reportedly, the Sinister Six movie would’ve been a heist film starring six Spidey rogues, although it’s unclear which. While the idea seems dubious, the Suicide Squad wound up working… the second time.

Meanwhile both Garfield and Webb indicated in interviews at the time that both were signed for a third film but not a fourth, further muddying the waters. Sony also announced that scripts for standalone movies starring Spidey antiheroine Black Cat and the long-awaited Venom were also in development. Well, we’ve gotten one of those, anyway…

It’s easy to cut through all the announcements and speculation and come to a simple conclusion: Sony, watching Disney’s Marvel Studios create an incredibly successful shared film universe, desperately wanted to own one of its own (as did Warner Bros., Universal Pictures, etc).

But despite the best efforts of The Amazing Spider-Man producers Avi Arad and Matt Tolmach to will such an entity into existence, the studio seemed to temporarily lose its appetite to continue creating a universe based around the Garfield iteration of the wallcrawler.

First, The Amazing Spider-Man 3 got pushed back from 2016 to 2018, with the idea being that it would flip places with The Sinister Six. But one by one, writers Roberto Orci (Star Trek Into Darkness), Alex Kurtzman (The Mummy), Jeff Pinkner, Ed Solomon, and Drew Goddard all dropped away from The Amazing Spider-Man 3, The Sinister Six, the Venom movie, and other offshoots.

Then several more massive shoes dropped. In 2015 when Sony Pictures’ servers were infamously hacked, resulting in the leak of thousands of confidential emails and memos. Among them were two bombshells: First, Garfield had been reportedly dismissed from the The Amazing Spider-Man franchise by top Sony brass after he failed to show up at a high-profile event in Brazil where The Amazing Spider-Man 3 was supposed to be announced for a 2017 release.

Second, it came to light that then-Sony Pictures president Amy Pascal had been exchanging emails with Marvel Studios chief Kevin Feige about the possibility of a) having Marvel assist with yet another reboot of the Spider-Man franchise, and b) as a result of that, allowing Spidey to appear in Marvel Studios films and interact with the Marvel Cinematic Universe.

While the road to the Sony/Marvel partnership is a story in itself, the two studios did eventually forge a historic, dramatic agreement that allowed Spider-Man to cross over between Sony films and Marvel projects–although the deal also allowed Marvel to reinvent and reboot the character yet again. That brought an immediate, official end to the Andrew Garfield era and all its potential spin-offs, with Marvel casting Tom Holland in the role and resetting his timeline back to the middle of his high school years.

The Holland era has been Spidey’s most successful yet on the big screen, with Spider-Man: Homecoming earning $878 million worldwide, Spider-Man: Far from Home roaring past $1 billion, and the new Spider-Man: No Way Home looking like it’s headed easily for the same rarefied territory despite the ongoing pandemic. And don’t forget Spidey’s appearances in Marvel’s titanic Captain America: Civil War, Avengers: Infinity War, and Avengers: Endgame.

Sony, meanwhile, has doggedly resurrected its Sony Spider-Man Universe plans, with the wildly successful Venom and Venom: Let There Be Carnage paving the way for the upcoming Morbius and Kraven the Hunter (although a Black Cat movie seems again to have stalled out).

Plus the “surprise” inclusion of former Spider-Men Tobey Maguire and, yes, Garfield in Spider-Man: No Way Home–with both of them, especially Garfield, giving poignant, genuinely moving encores–has led some fans to demand that Garfield get a proper shot at The Amazing Spider-Man 3. But the biggest surprise of all is that he’s already gotten it.

Spider-Man: No Way Home is in theaters now.