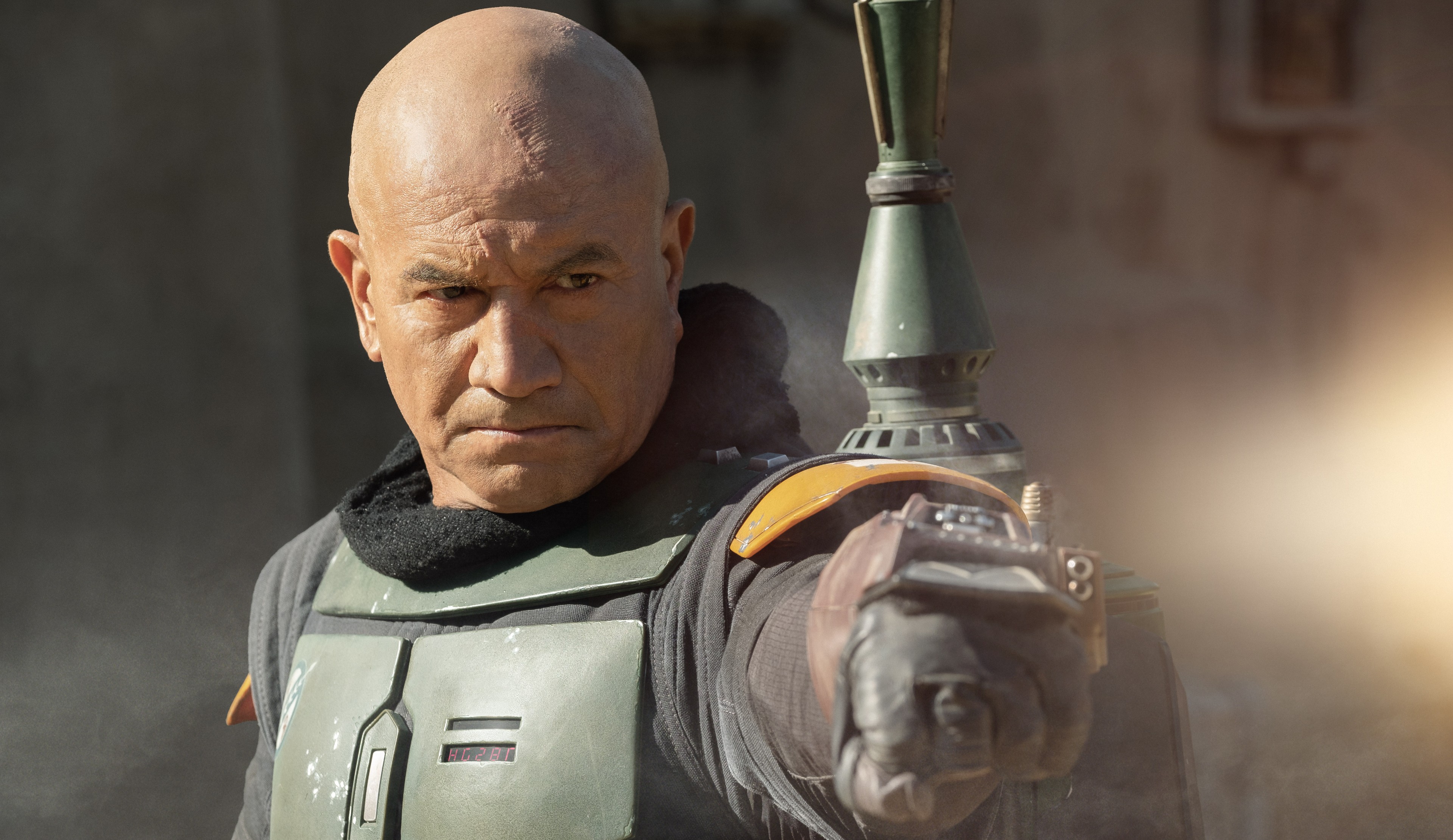 The Book of Boba Fett kicked off with a few surprises, including answers to some of the biggest questions Star Wars fans had about the bounty hunter’s past. Yes, “Stranger in a Strange Land” finally reveals what happened to Boba Fett during the five years between Return of the Jedi and The Mandalorian season 2.

From the very first scene, we’re treated to flashbacks that pick up where Boba’s story left off in Return of the Jedi. Jabba the Hutt’s sail barge now lies as a ruin in the deserts of Tatooine while down below the bounty hunter is slowly digested by the monstrous sarlacc. In 1983, we were meant to think that the book of Boba Fett ended here, a gruesome outro for the galaxy’s most infamous scum.

But “Stranger in a Strange Land” shows that this setback was only the beginning, as Boba Fett sets out to reclaim his life and his armor as well as take some power of his own. Here’s everything The Book of Boba Fett revealed about the bounty hunter’s journey leading up to his rise as Tatooine’s newest crime lord…

Even in the original (now non-canon) Legends continuity, Boba Fett’s demise was hardly definitive. Just a few months after being swallowed up by the sarlacc, Marvel’s Star Wars #81 (1983) brought the bounty hunter back for an issue that saw him escape the monster’s digestive system…only to fall right back in by the end of the story.

Other stories, such as the classic Dark Empire comic book series and The Bounty Hunter Wars trilogy of novels, further explored how Boba Fett managed to survive inside the sarlacc and eventually found a way to escape. The latter books even revealed that Boba had some help from an unlikely ally: his rival Dengar, who nursed Boba back to health after his explosive escape left him in a vegetative state.

The Book of Boba Fett‘s version of the story resembles what happened in Legends, minus Nurse Dengar or falling into the pit a second time (that we know of). We watch in the opening minutes of the episode as the bounty hunter wakes up inside the beast’s stomach and uses a dead stormtrooper’s leftover oxygen supply to survive long enough to burn his way out of the sarlacc with his wrist-mounted flamethrower. We see him digging himself out and onto the dunes just a few yards from the dead sarlacc’s mouth. This is not unlike Boba using his jetpack to blow his way out of the monster in Legends, although in that version of that story he also formed a psychic link with the sarlacc…

How Long Was Boba Fett in the Sarlacc Pit?

So yes, Boba Fett burned his way out of the sarlacc, but there’s still the question of just how much time he spent inside the belly of the beast before making his escape. After all, there’s a five-year gap these flashbacks have to account for.

Unfortunately, “Stranger in a Strange Land” doesn’t offer up many clues as to how much time has passed since Boba was first swallowed up. We see after he escapes that just beyond the pit is the burnt carcass of Jabba’s sail barge. It’s not on fire or smoking anymore, which means at least a little time has passed since it was destroyed.

Let’s say it’s been at least a few days — which also seems long enough for Boba’s oxygen supply to have run out. (I’m guessing here.) But how did Boba survive being suspended in the sarlacc’s highly acidic digestive system for that long? In Legends, we learn that the bounty hunter’s Mandalorian armor is strong enough to withstand the acid in the short term, but it’s clear that in both versions of the story being slowly digested still takes its toll of Boba’s body.

How Boba Fett Lost His Armor

Another mystery that needed solving: just how did the Jawas get their hands on Boba Fett’s armor? The answer is surprisingly simple. Sometime after Boba escapes the sarlacc, Jawa scavengers show up in a Sandcrawler to pick the remains of Jabba’s sail barge clean. When they discover Boba’s half-dead body lying unconscious in the sand, they quickly strip him of his armor, dooming him to roast under the scorching Tatooine suns. As we learned in The Mandalorian, Mos Pelgo marshal Cobb Vanth (Timothy Olyphant) will eventually encounter these Jawas and trade a container of valuable crystals for the stolen armor.

The Jawa scene actually ends up being another fun callback to Legends. It’s these pesky scavengers who also first discover an unconscious Boba Fett in Star Wars #81. But in that case, they confuse him for some sort of droid or cyborg, so they pack him into their Sandcrawler. He later has a run-in with Han Solo and Leia, who are trying to rescue Artoo from these same Jawas. Fortunately for Han, Boba is suffering from amnesia.

Boba Fett and the Tusken Raiders

After the Jawas leave him stranded in the desert, Boba is next discovered by a tribe of Tusken Raiders, who take him prisoner for reasons that are unclear. Despite The Mandalorian fleshing out Tusken culture, customs, and language, they’re once again relegated to cruel savages in “Stranger in a Strange Land,” keeping Boba tied up at their camp, his face growing increasingly blistered in the sun. And when Boba attempts to escape, the Tuskens beat him senseless and tie him right back up.

But by the end of the episode, there are signs that things are about to change. When Boba saves a Tusken youngling from a desert monster, he seems to earn the respect of the tribe’s leader, who offers him a drink of water.

Is this the start of a new alliance that will eventually see Boba don the robes and weapons of the Tusken Raiders? It would explain why Boba reemerged in The Mandalorian armed with a gaffi stick.

Now, five years after his apparent death, Boba Fett is back in his Mandalorian armor, which he recovered from Din Djarin on Tython, and has taken over Jabba’s old territory with assassin Fennec Shand, his deadly right hand. It’s a hell of a glow up.

We’ll likely learn much more about the bounty hunter’s journey as The Book of Boba Fett continues on Wednesdays on Disney+.